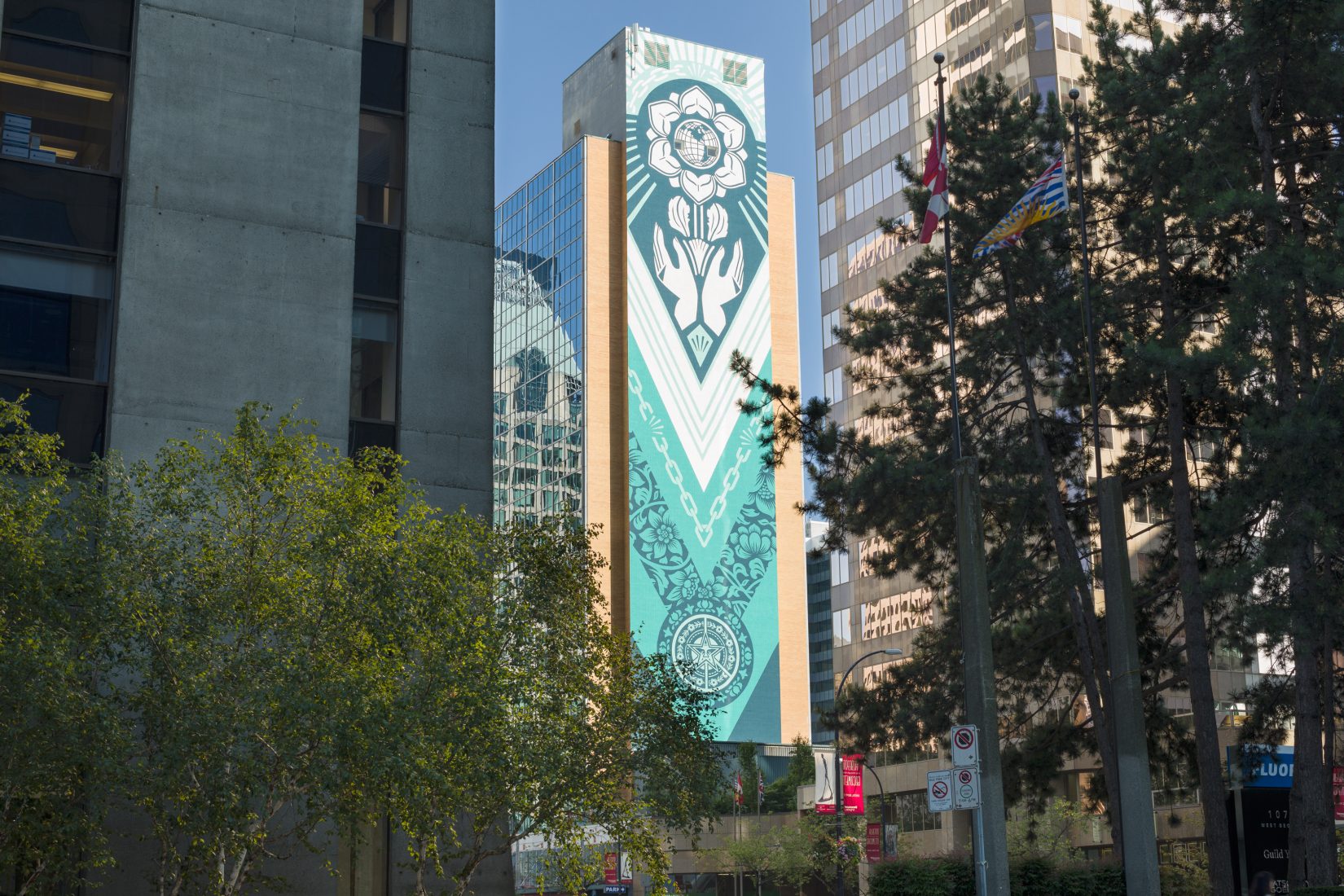 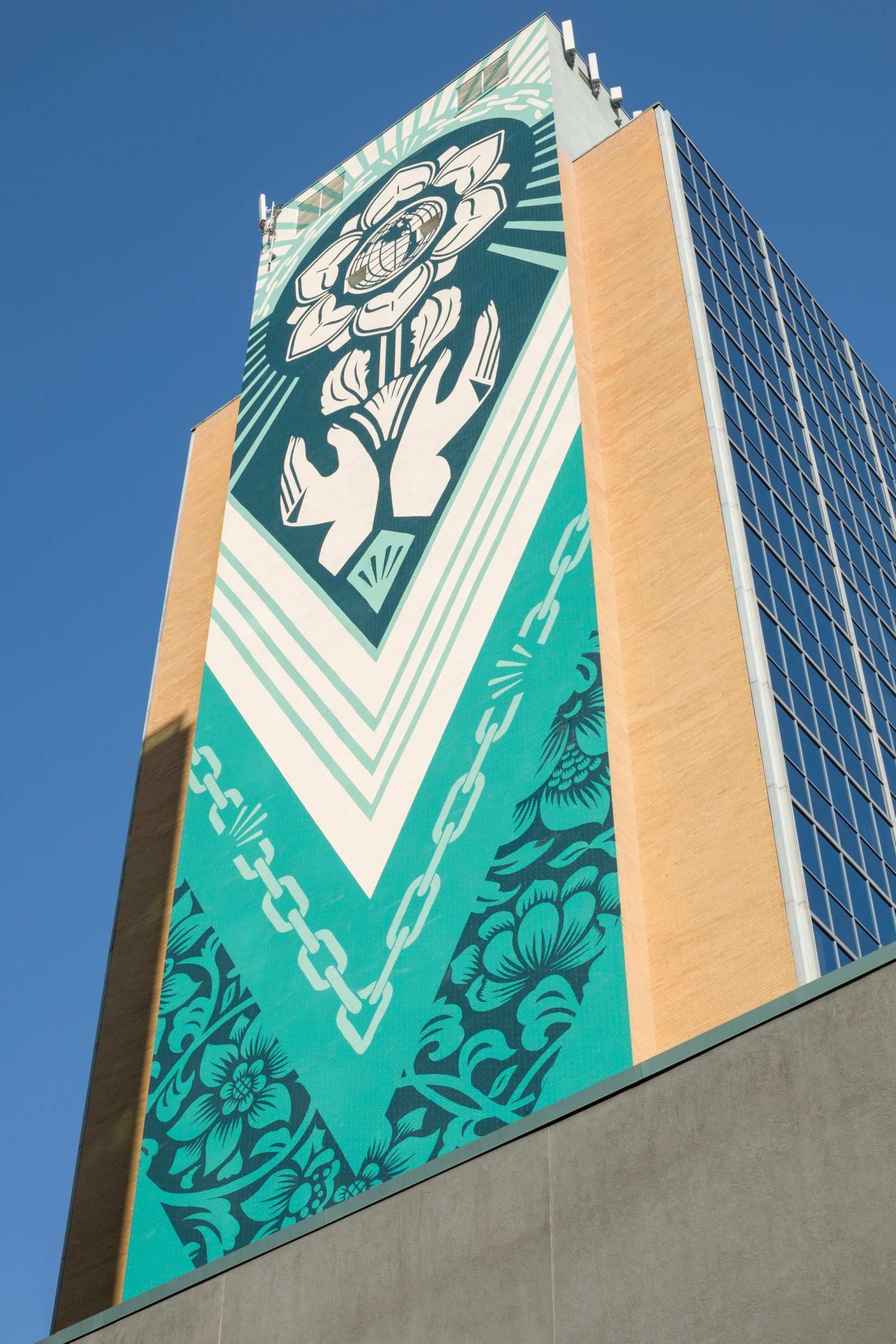 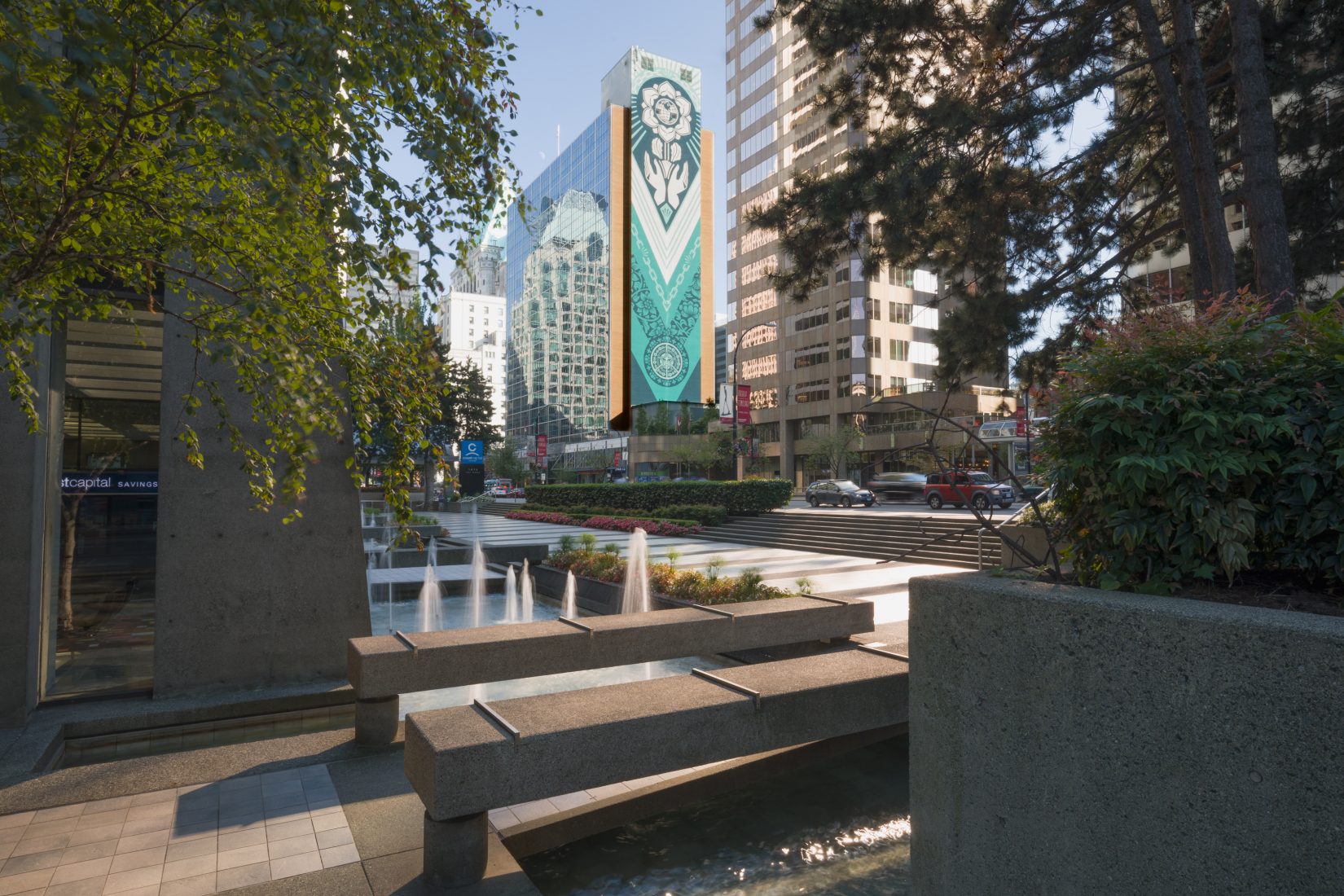 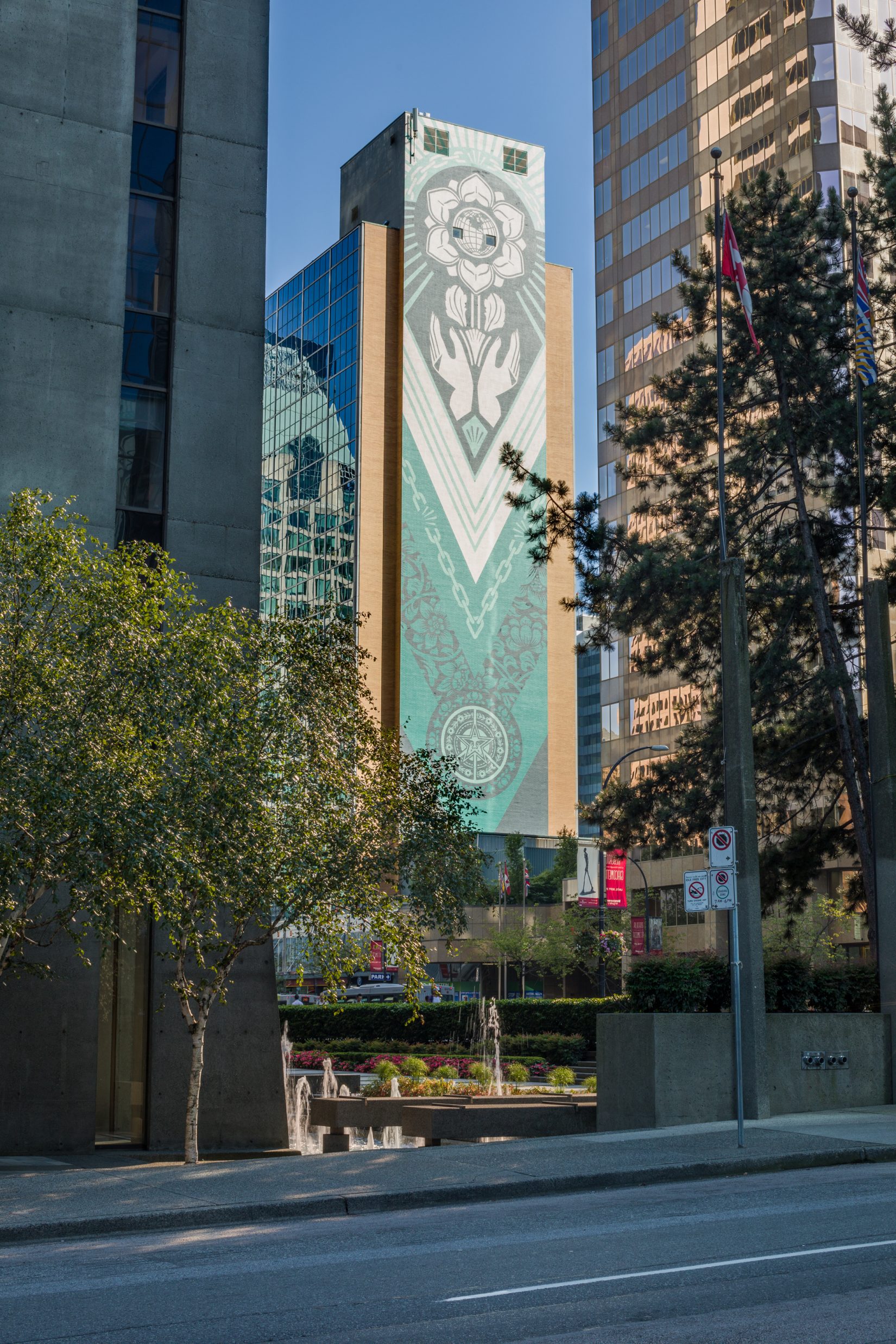 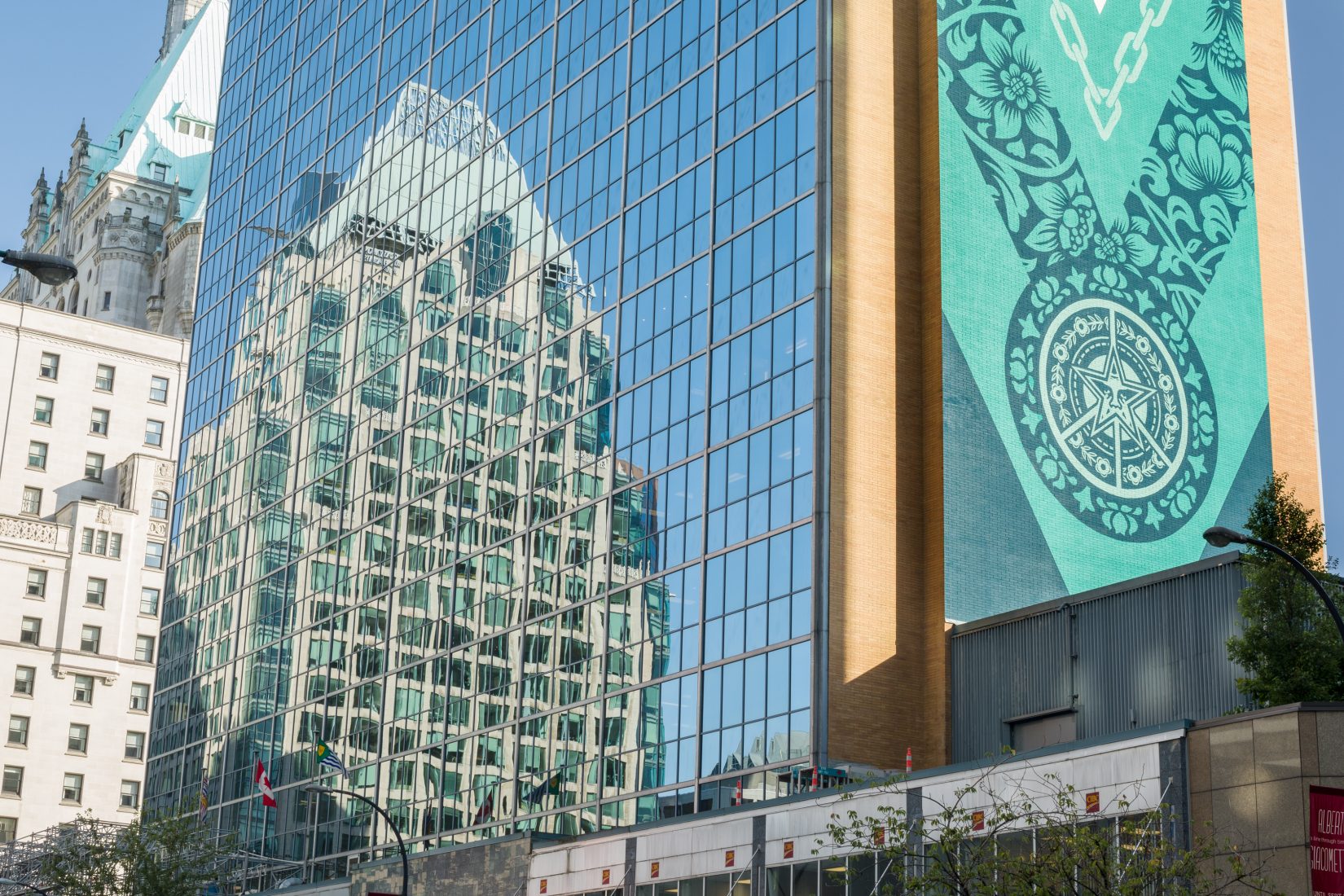 This new public artwork from Shepard Fairey addresses this important matter on a grand scale in the heart of Vancouver’s downtown core, seeking to inspire conversation and contemplation. In the Earth Crisis series, Fairey deviates from his usual colour scheme of black, white, and red; the mural’s blue and teal tones are well-suited not only to its subject matter but its placement in Vancouver, a city known for sea and sky.

Earth Justice continues Fairey’s Earth Crisis series, which launched in 2015 when he suspended a massive, globe-like sphere between the first and second levels of the Eiffel Tower. The work was the first 3- dimensional installation at the Eiffel Tower and coincided with the monumental COP21 Climate Conference.

Addressing climate change and environmentalism, the Earth Crisis series is intended to harness Fairey’s provocative, inspirational artistic style to address the urgent need for humanity to work together to bring environmental issues to the forefront of social discourse. The installation of this public artwork in Vancouver promotes our city’s commitment to stand with the international community in support of sustainability and cooperation towards a hopeful, positive future.

With Surface Series, Vancouver joins the lead of other progressive cities and celebrated urban spaces around the globe. Cities like New York, London, Boston and Seattle have made it a priority to place bold and large-scale public art installations in the hearts of their cities and public spaces; and Vancouver deserves the same.

The program’s goal is to spark dialogue, promote cultural understanding and inspire creativity in the heart of the city through a large-scale, vertical art commission. The program is envisioned to include work by both prominent national and international contemporary artists practicing in a variety of mediums including painting, photography, text, digital and more, and  seeks to improve the urban environment through creative placemaking and the enhancement of civic space.

Located at the intersection of Burrard and Georgia in the heart of downtown Vancouver, the Burrard Building at 1030 West Georgia Street is largely considered to be the geographic center of our city.

The building also occupies a central place in the history and imagination of Vancouver. As the first modern curtain wall building in the Vancouver built in the 1950s, the Burrard Building has always been a symbol of a forward-thinking ideology and a harbinger of the City’s future.

Shepard Fairey is an American graphic artist and social activist. Part of the Street Art movement, with Keith Haring and Jean-Michel Basquiat as his predecessors, Fairey communicates his brand of social commentary via murals and public spaces. “I’ve never really considered myself just a street artist,” he has said, “I consider myself a populist.”

His iconic Hope (2008) portrait for then-presidential candidate Barack Obama is perhaps his most well-known work, in addition to his Obey campaign, which started in 1992 while Fairey was enrolled at the Rhode Island School of Design. Born Frank Shepard Fairey on February 15, 1970, in Charleston, SC, the artist borrows from graphic styles of the 20th century, blurring the boundary between high and commercial art through type and image.

Fairey has exhibited in numerous galleries and museums, including the ICA Boston, the Warhol Museum, CAC Cincinnati, and Cranbrook Art Museum, among numerous others. His work is included in the collections of the Smithsonian, Washington D.C., the Los Angeles County Museum of Art, and the Victoria and Albert Museum, London. He currently lives and works in Los Angeles, CA.