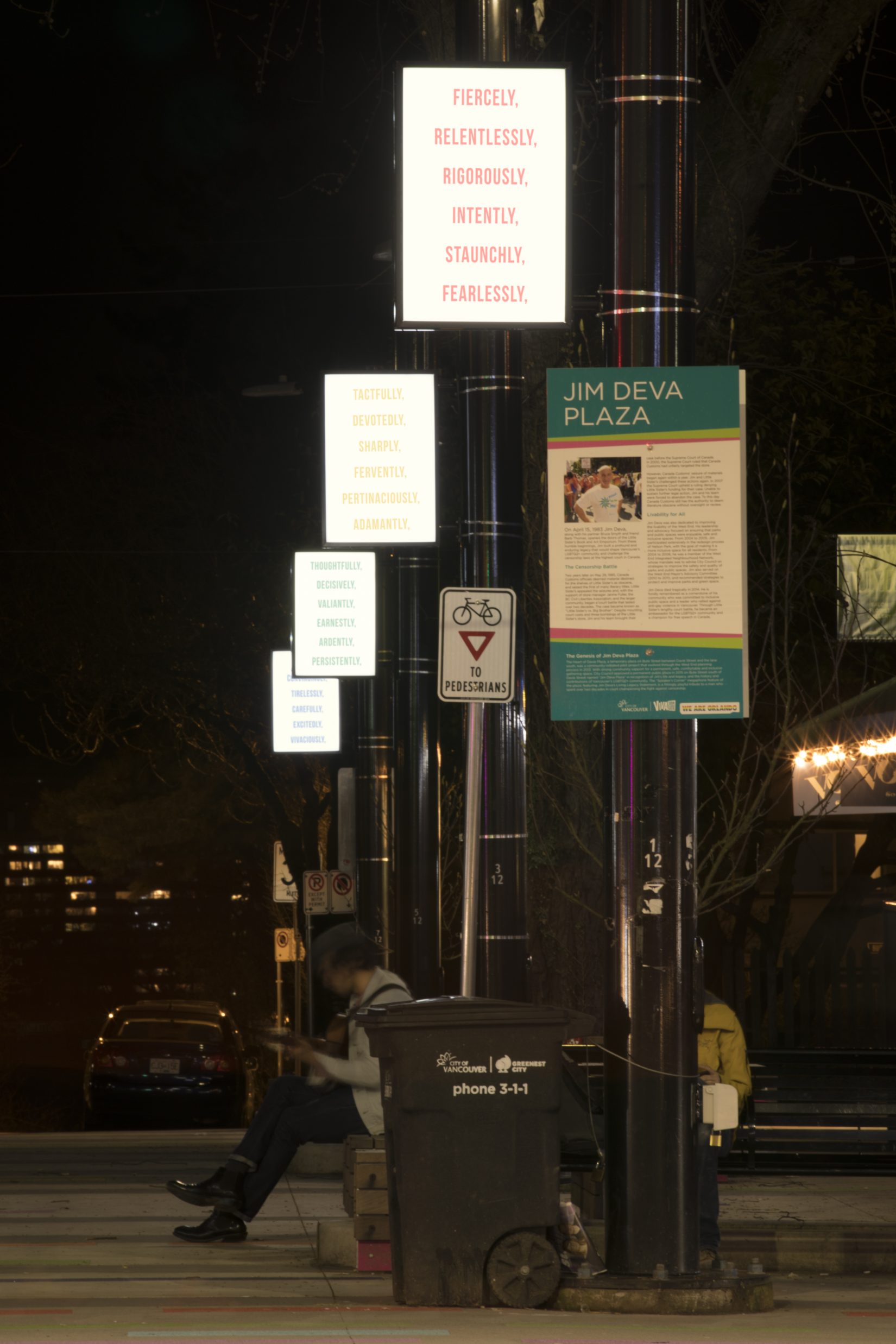 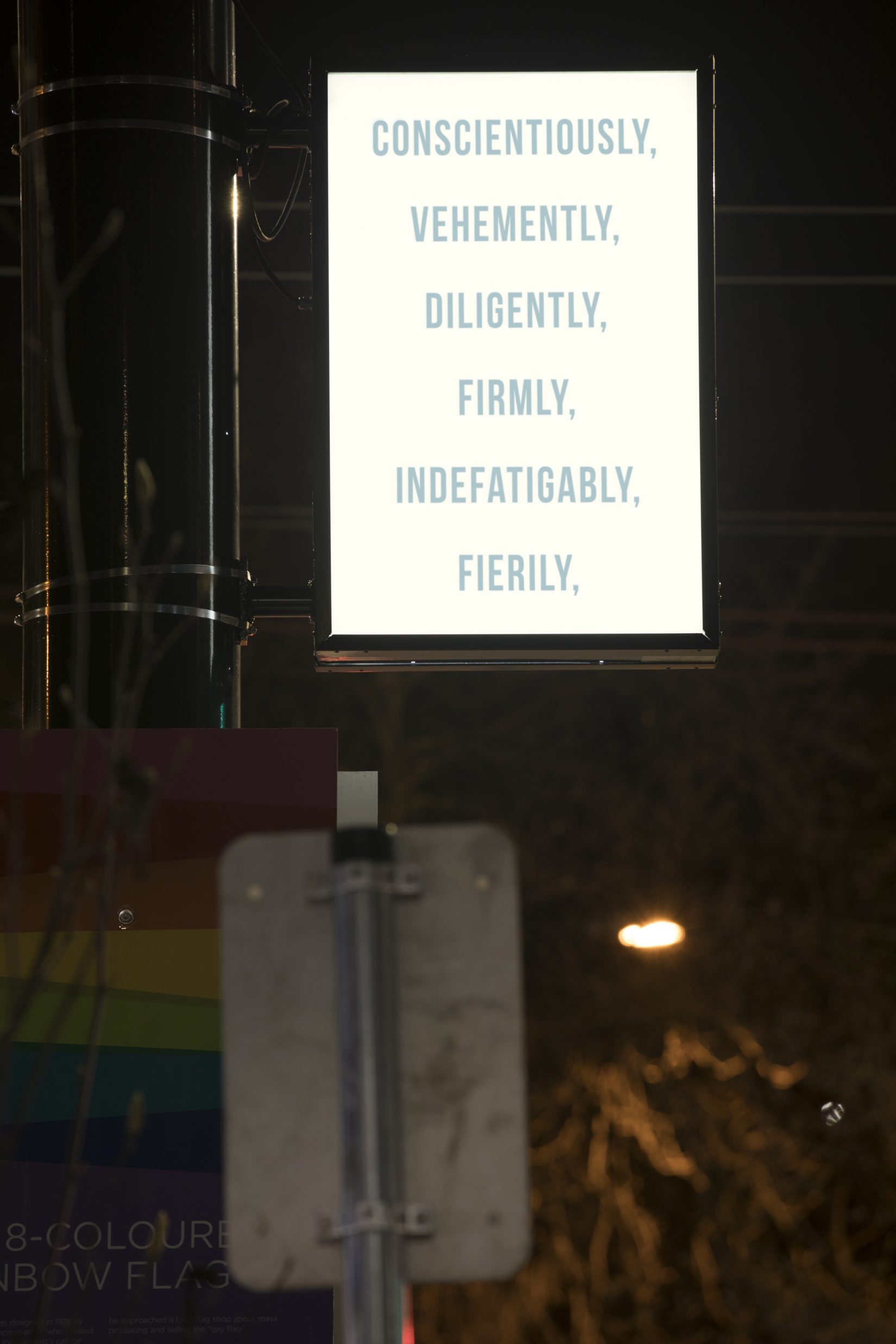 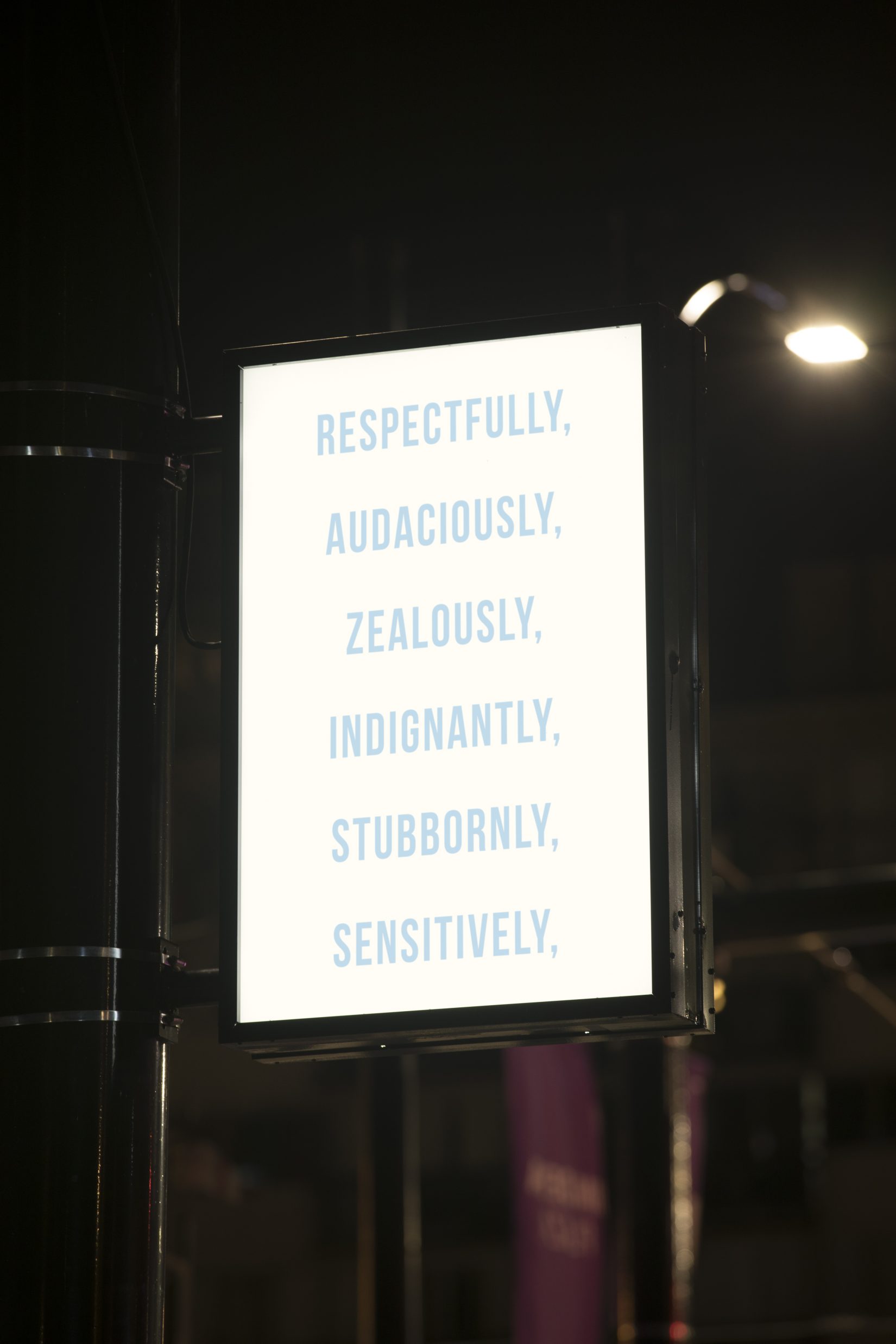 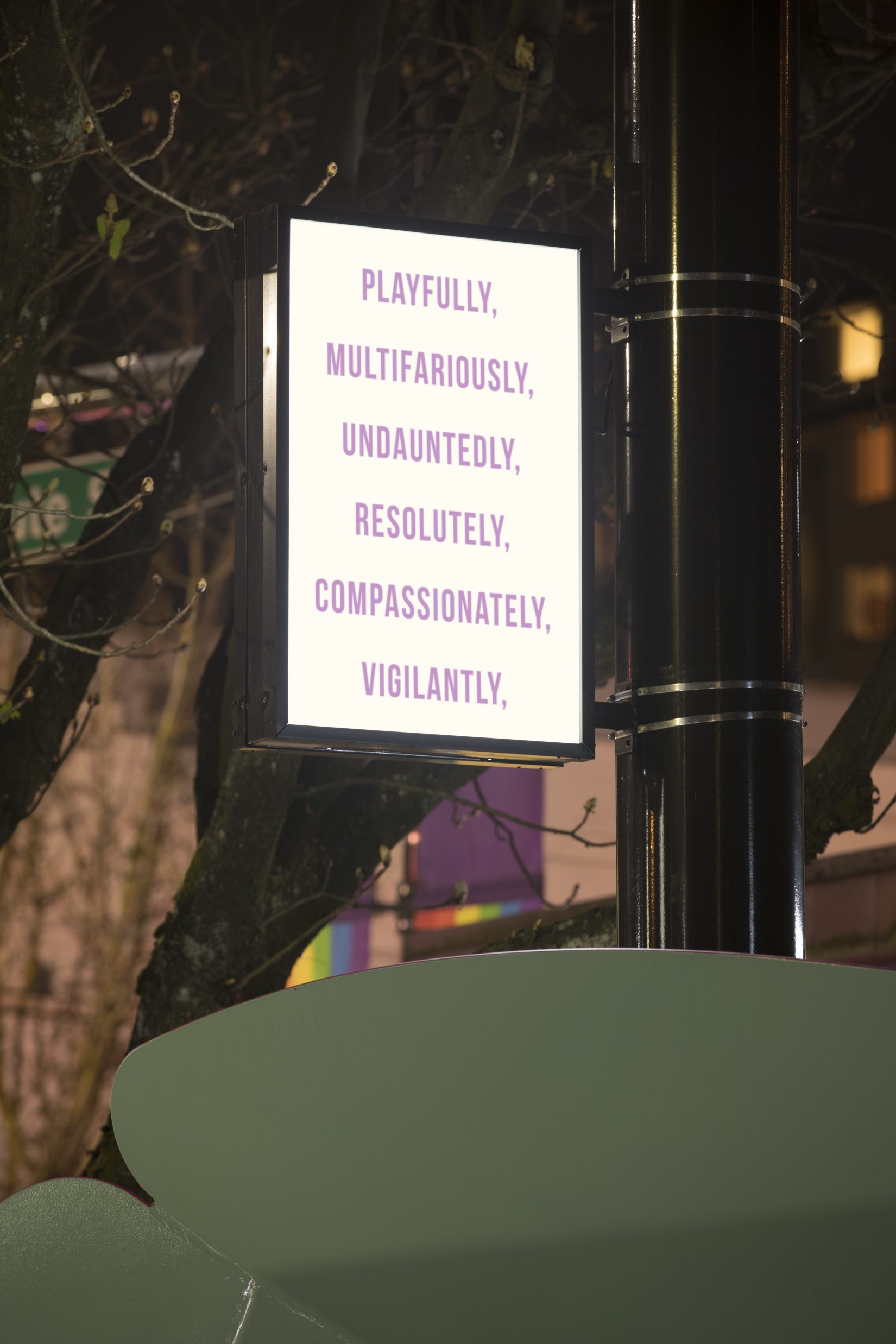 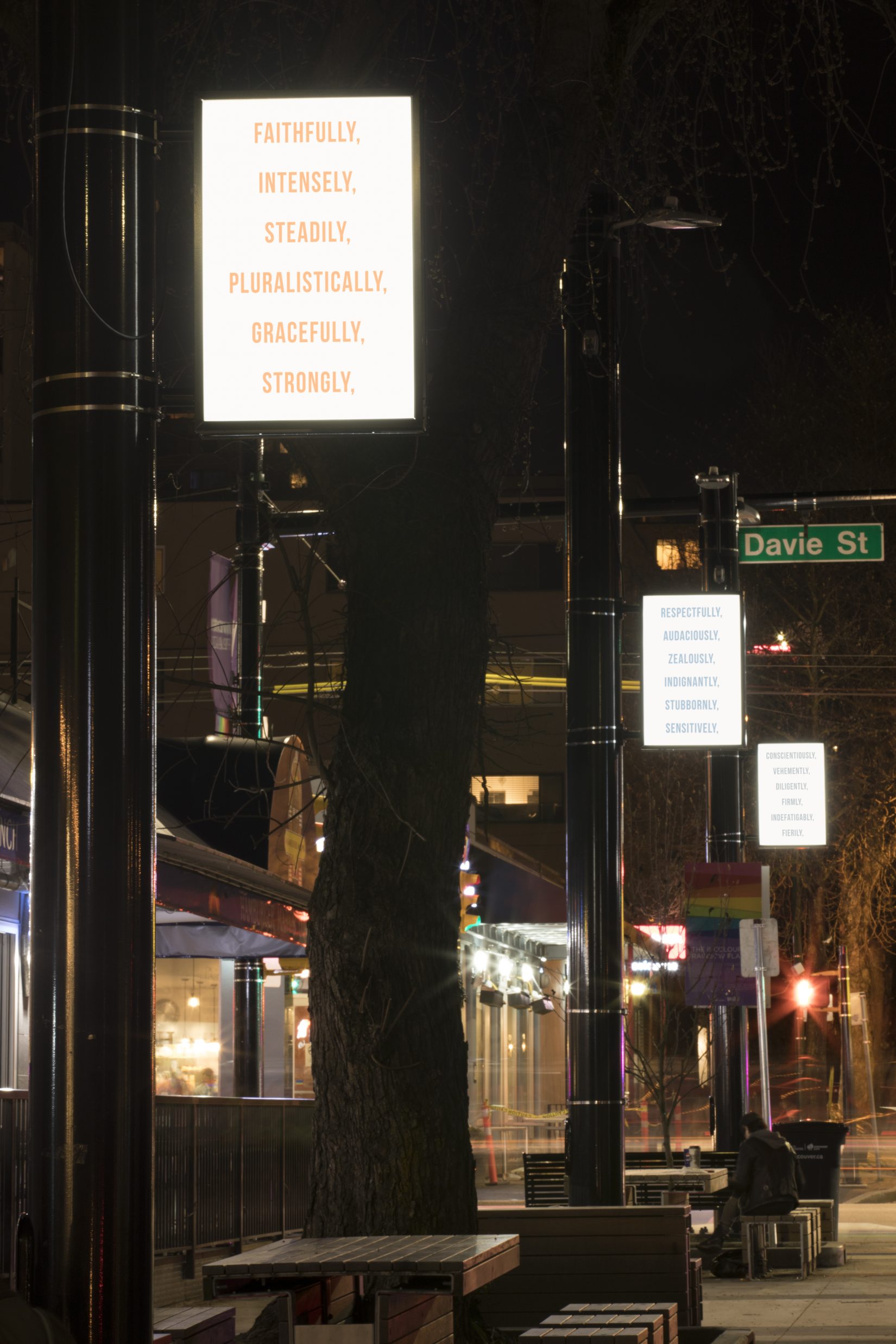 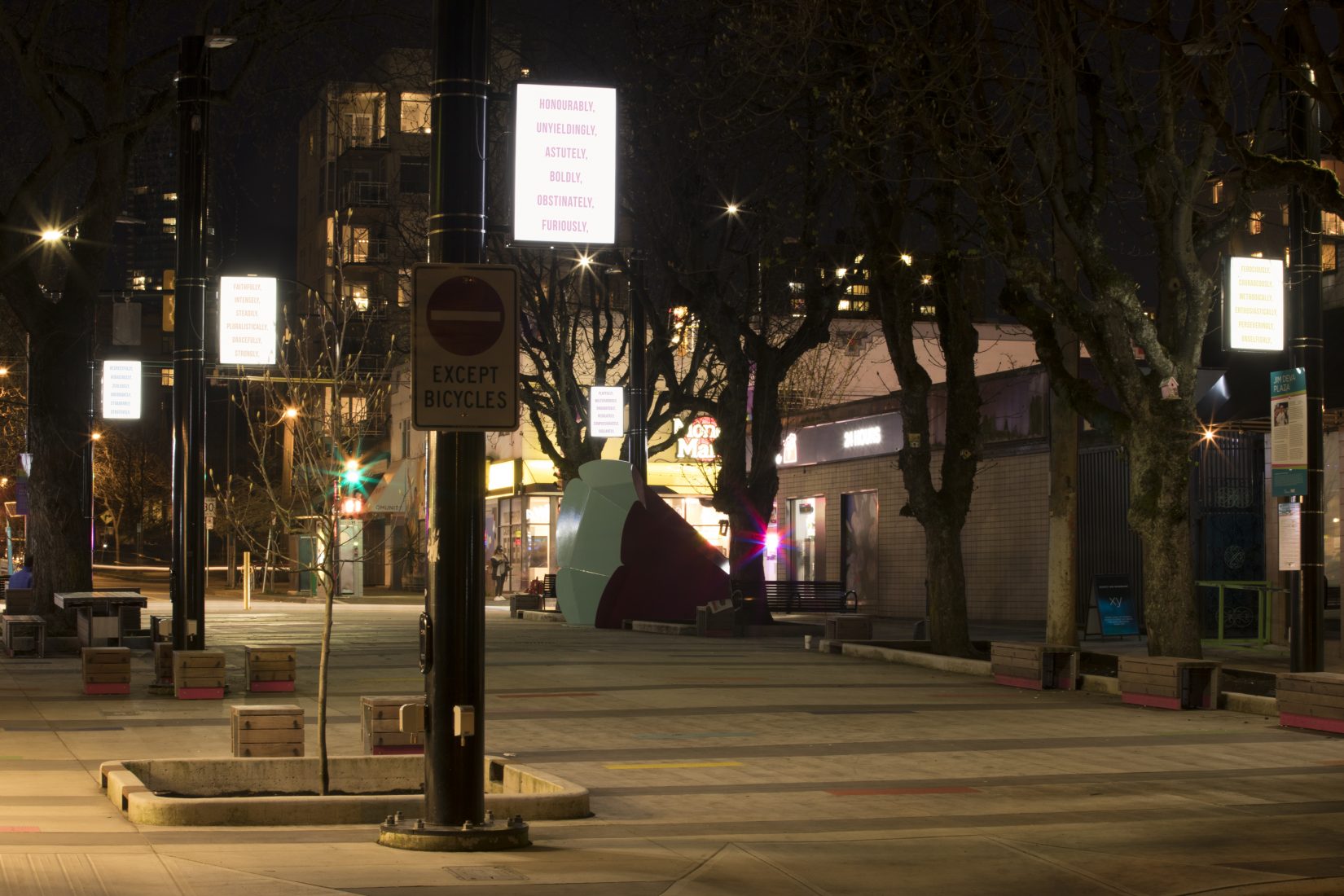 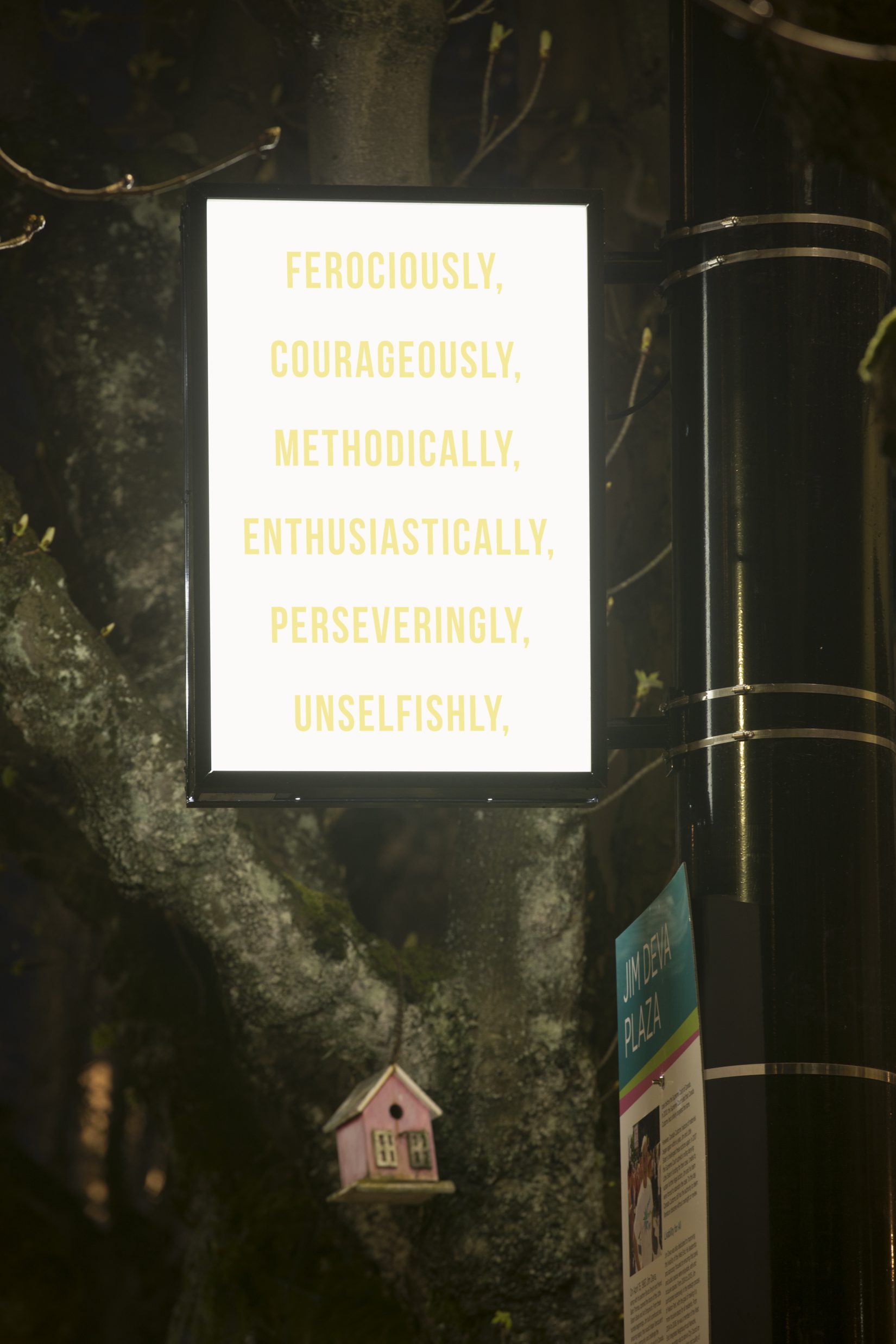 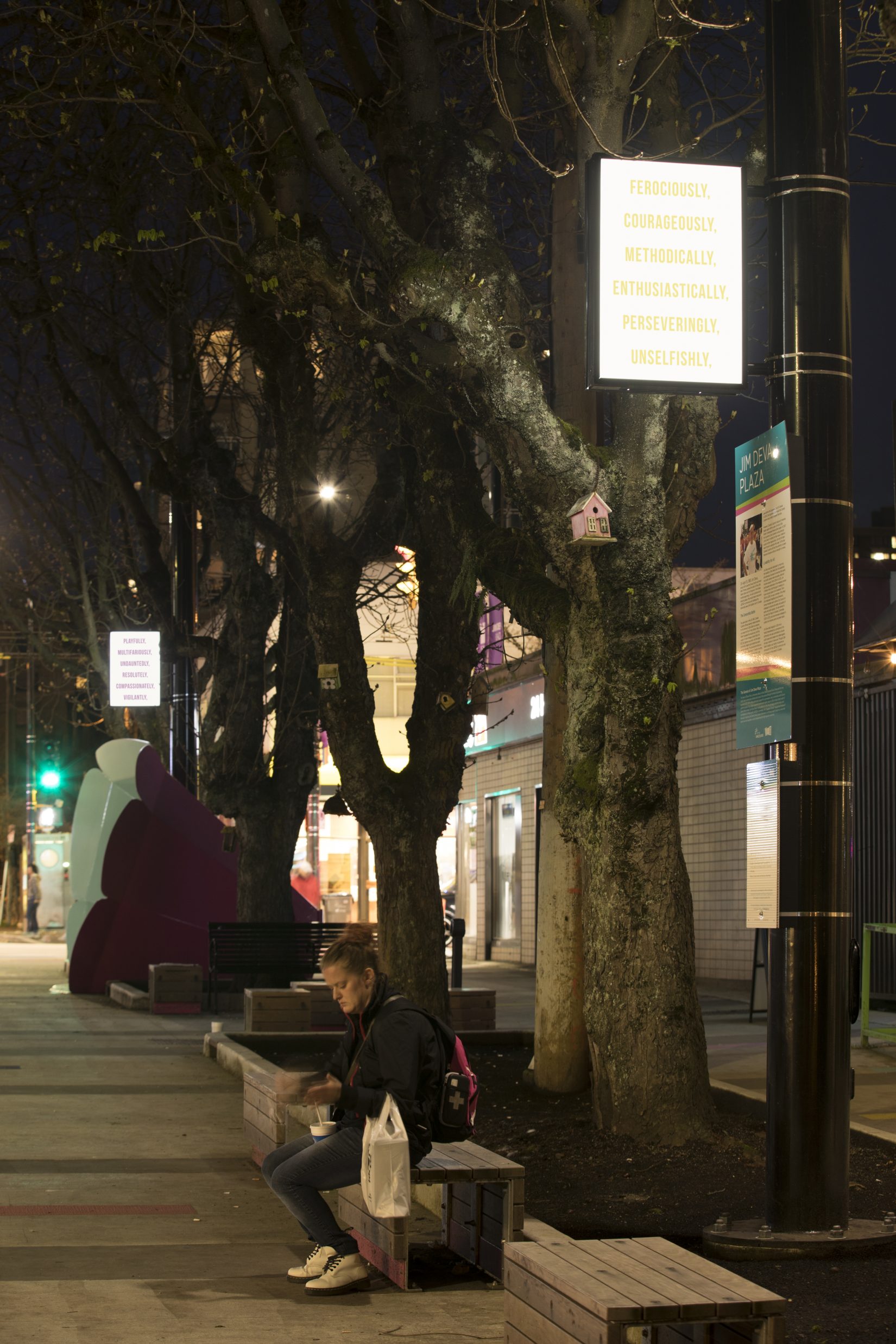 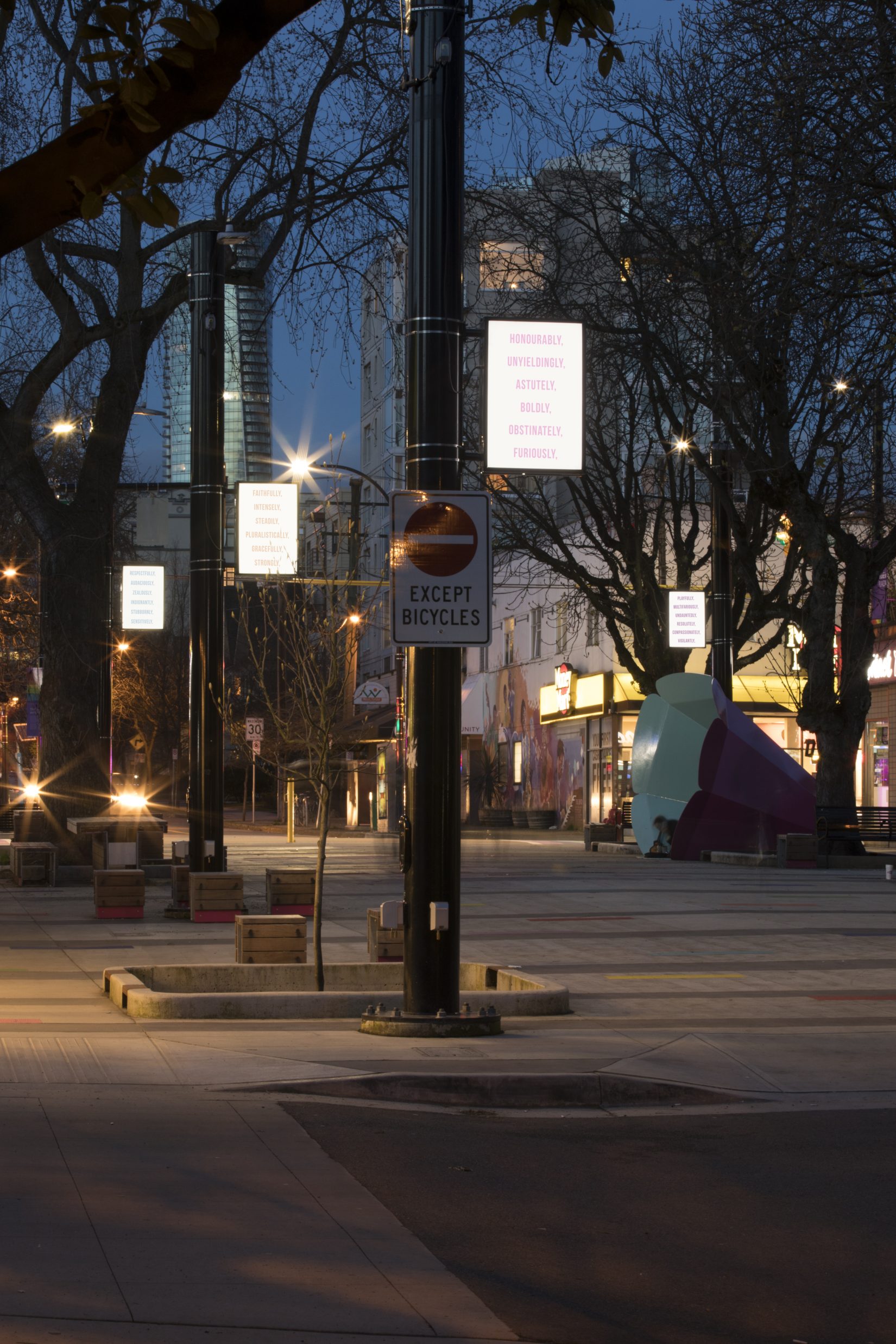 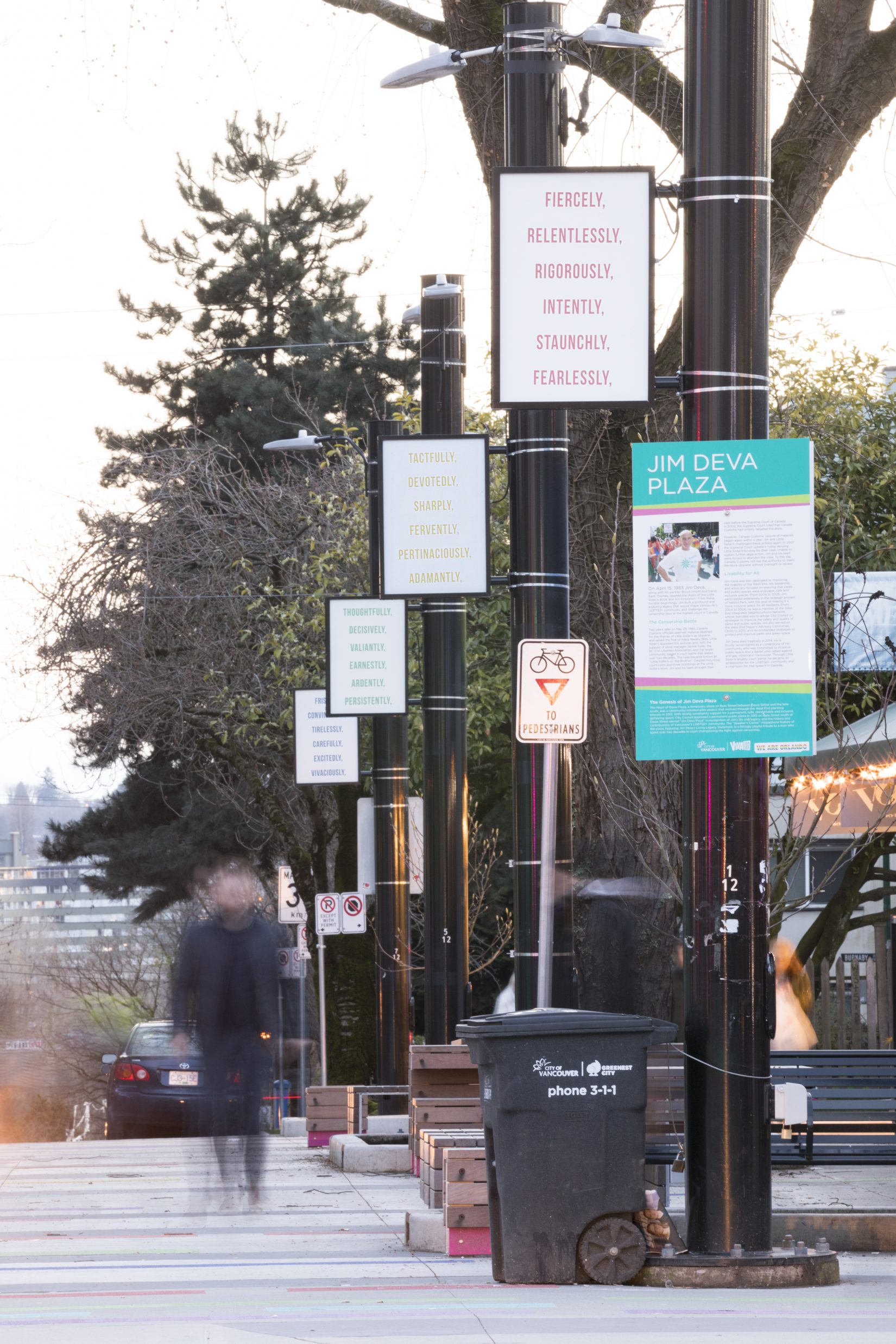 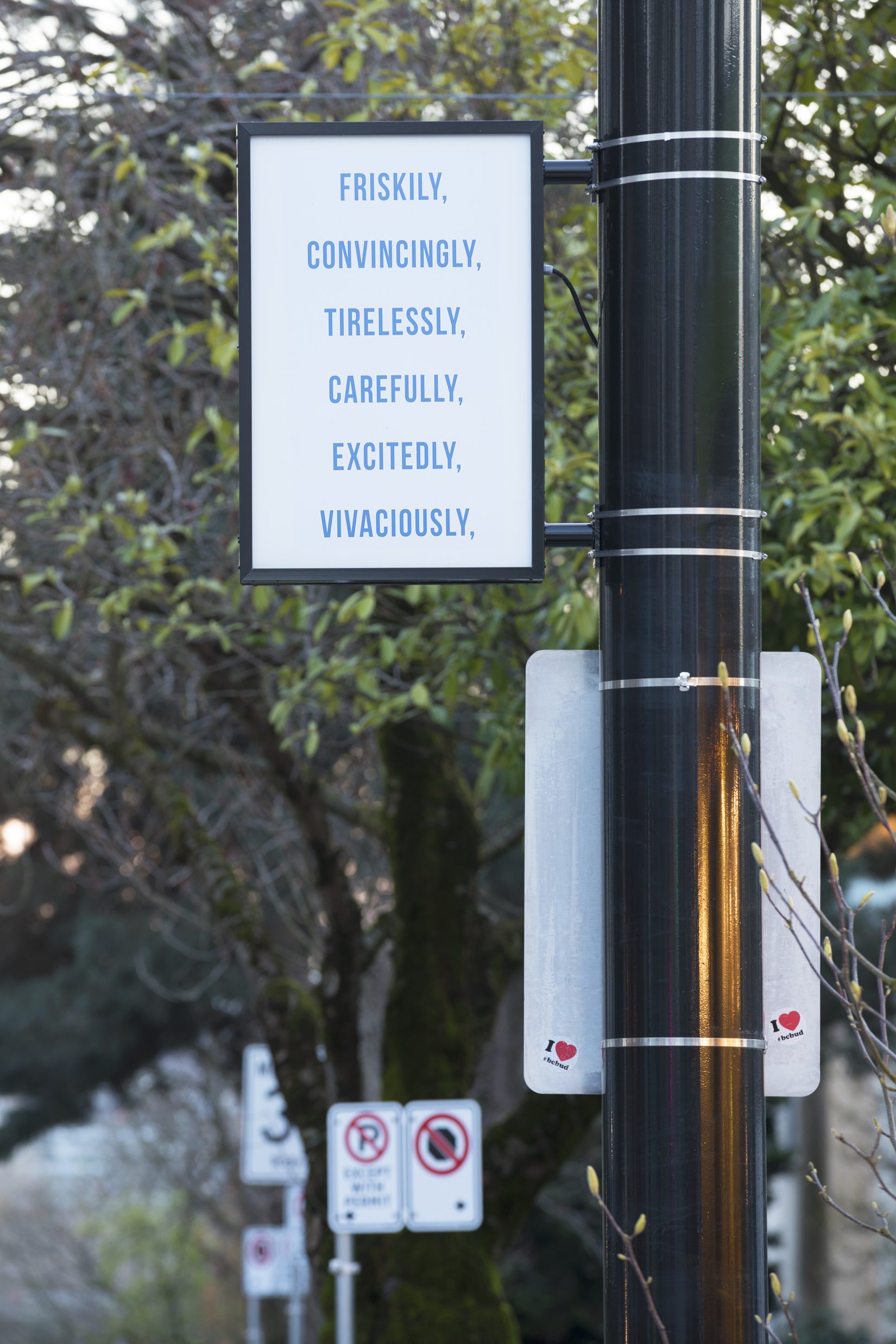 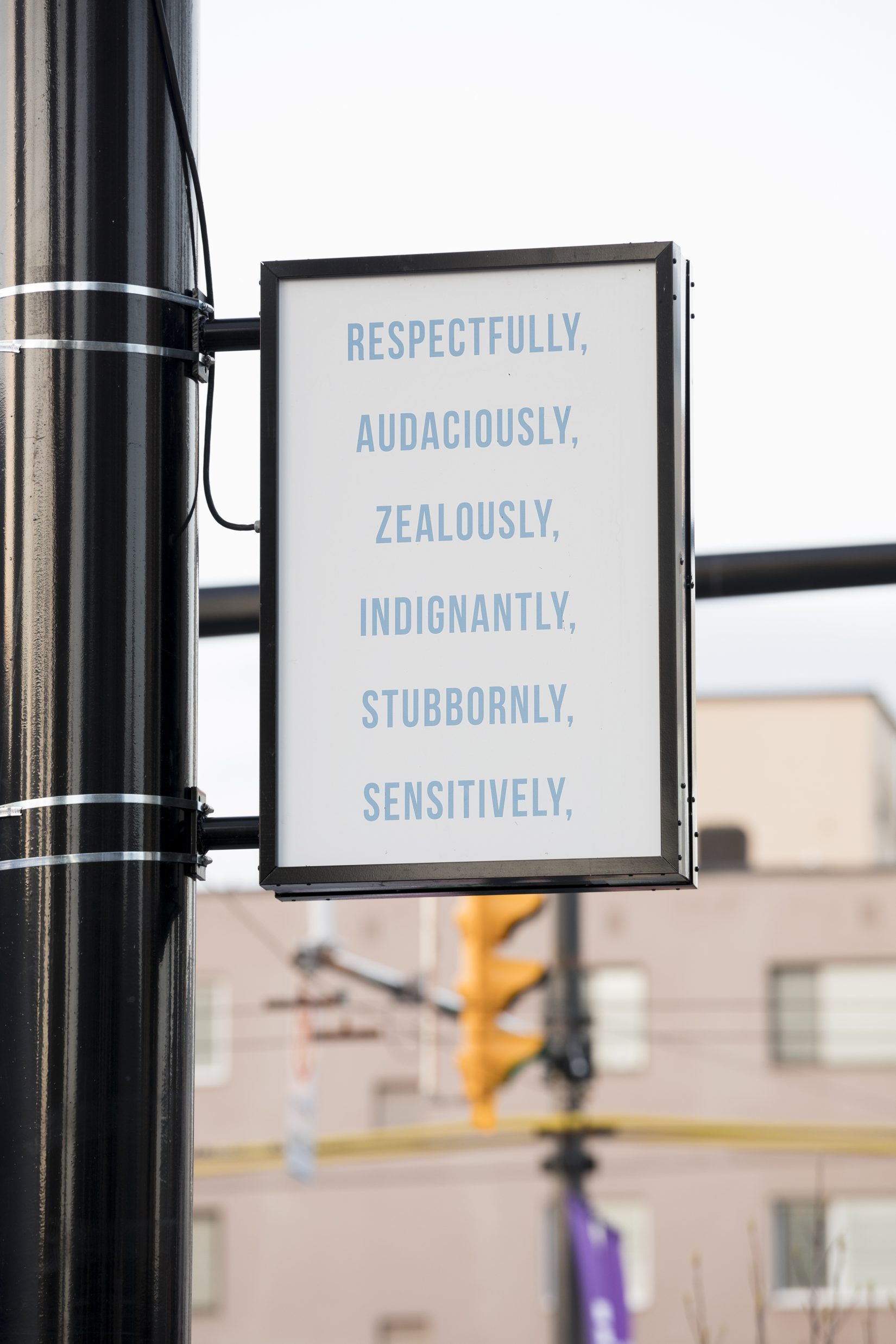 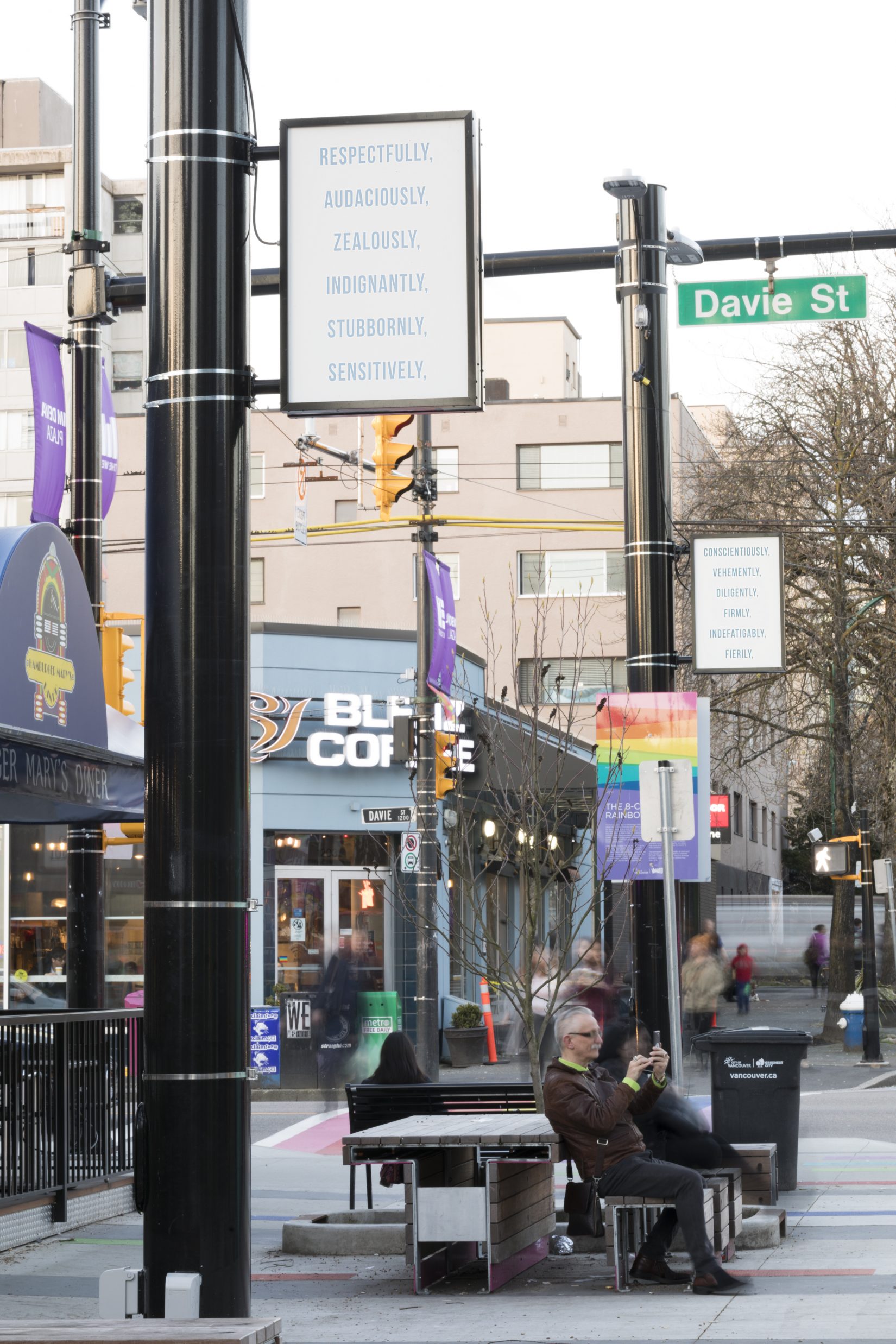 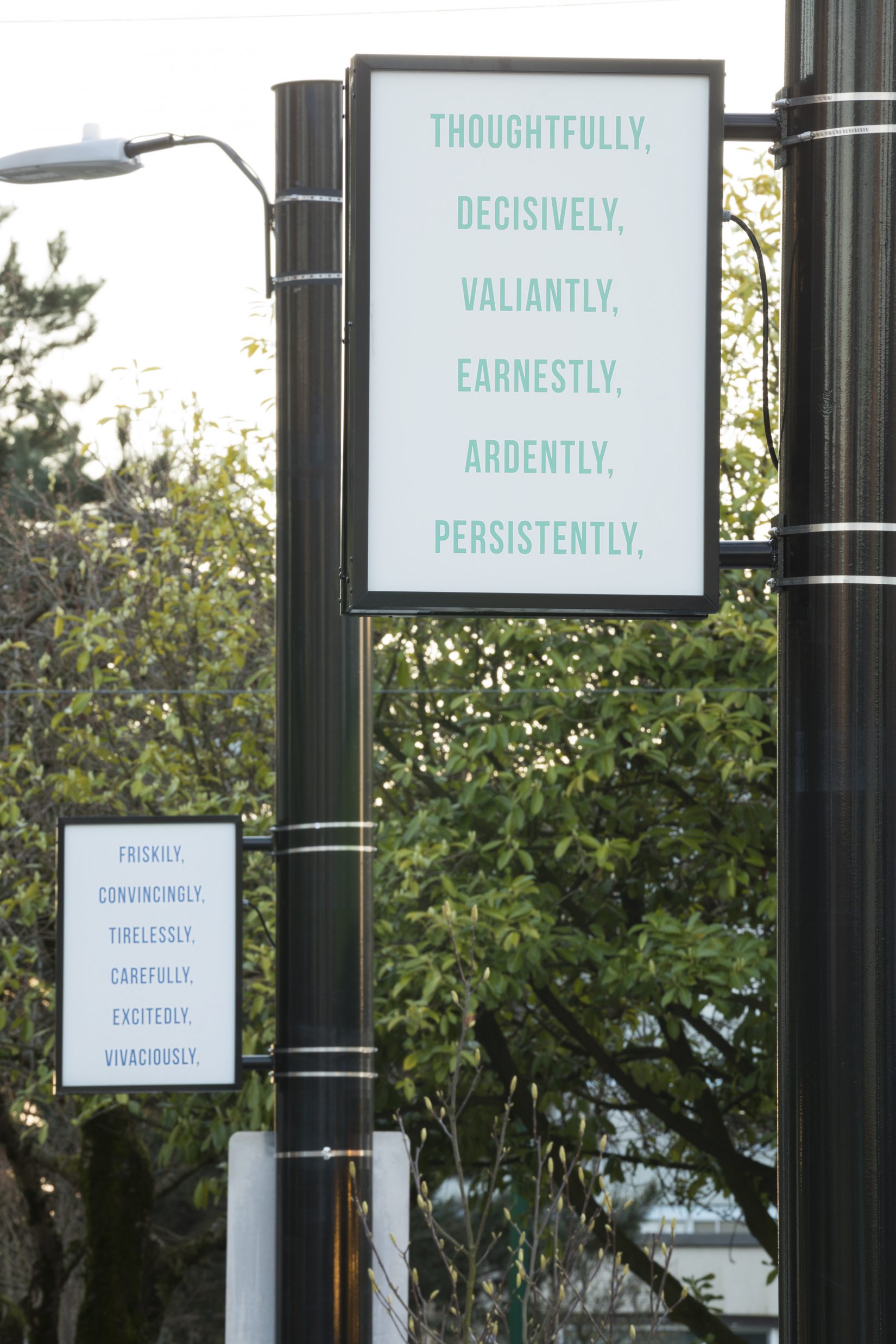 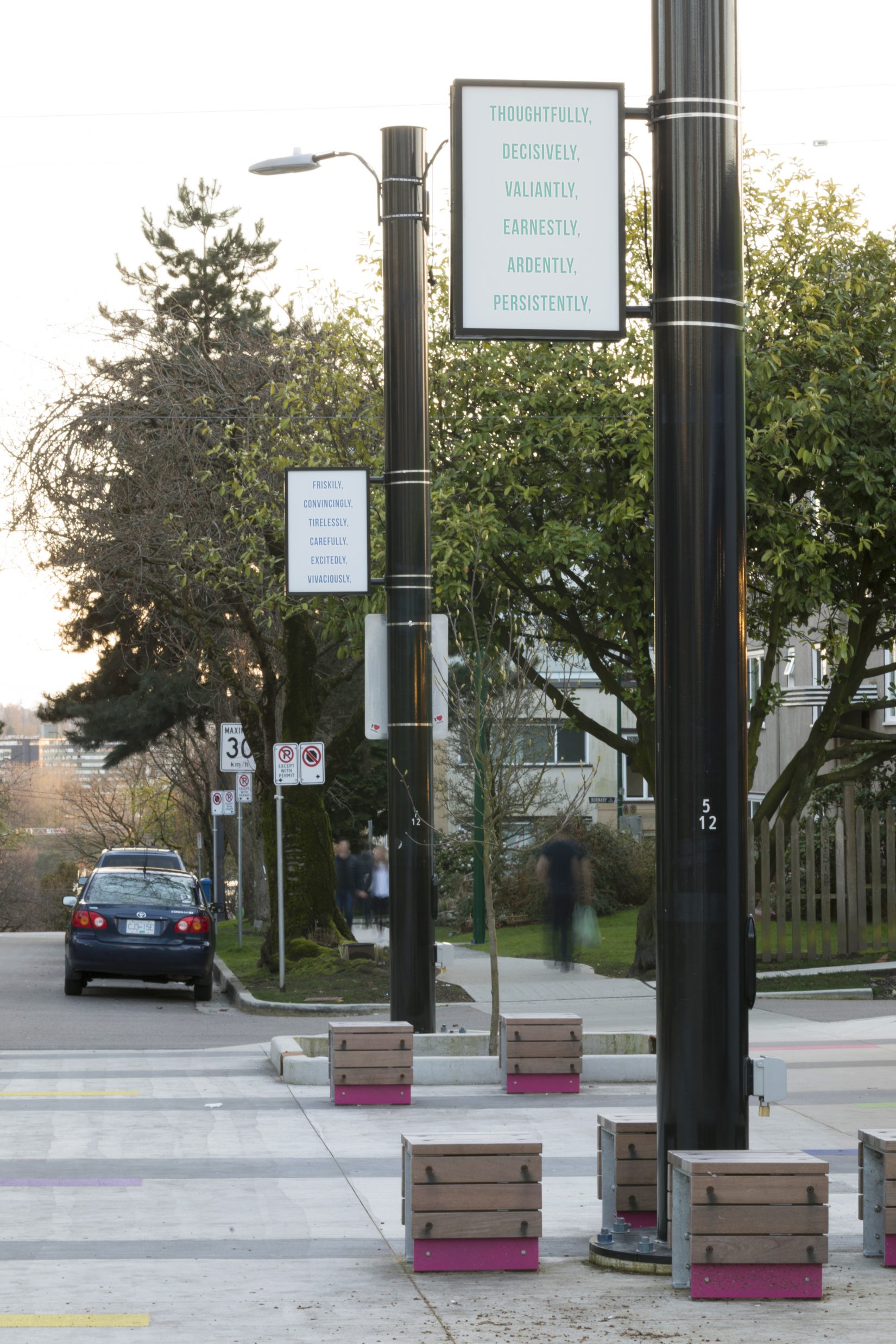 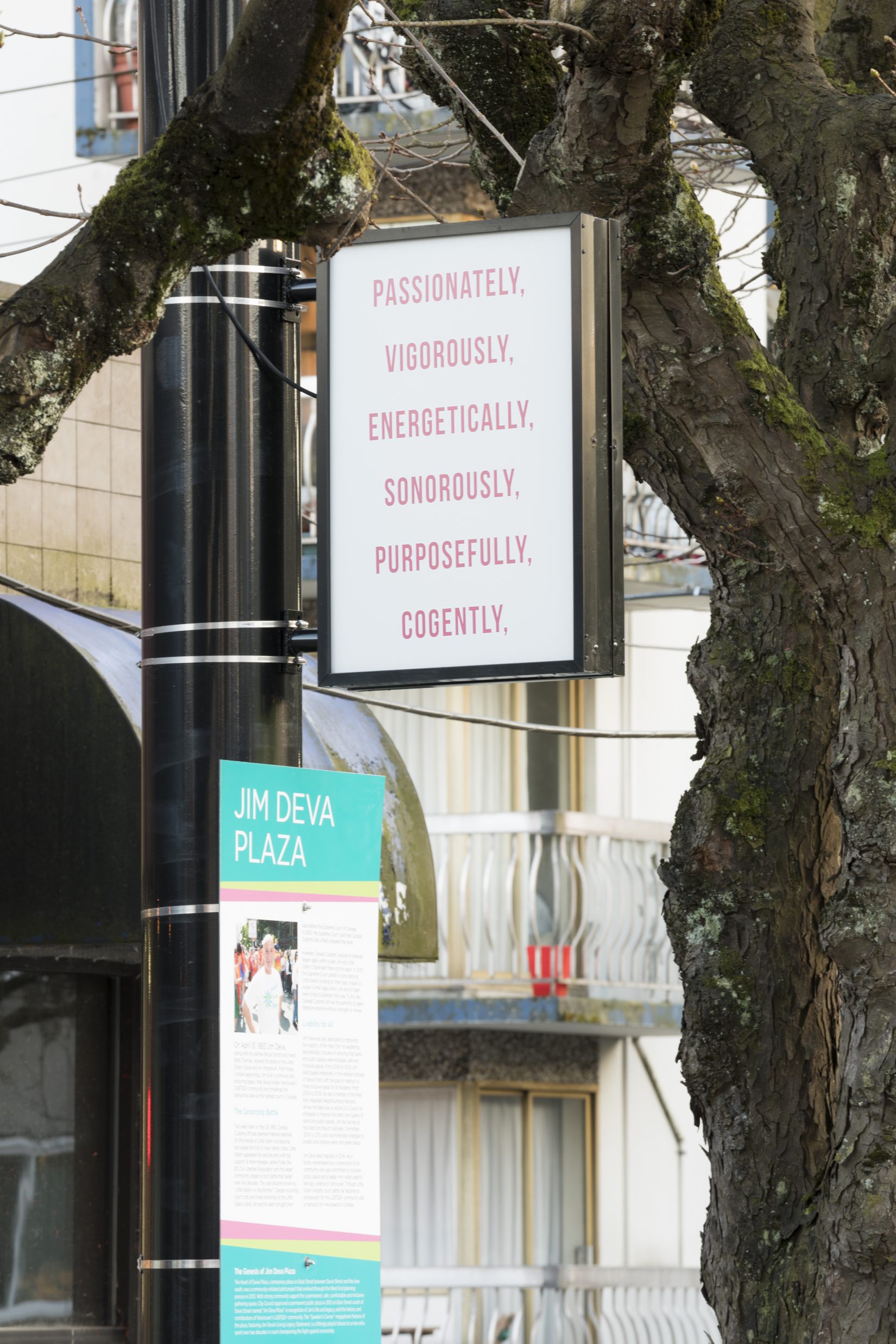 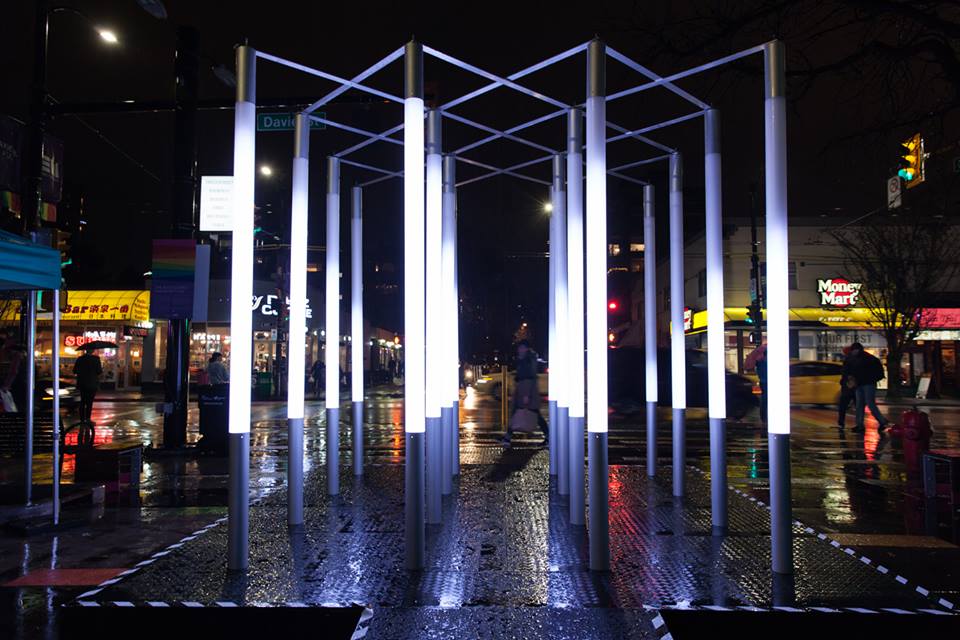 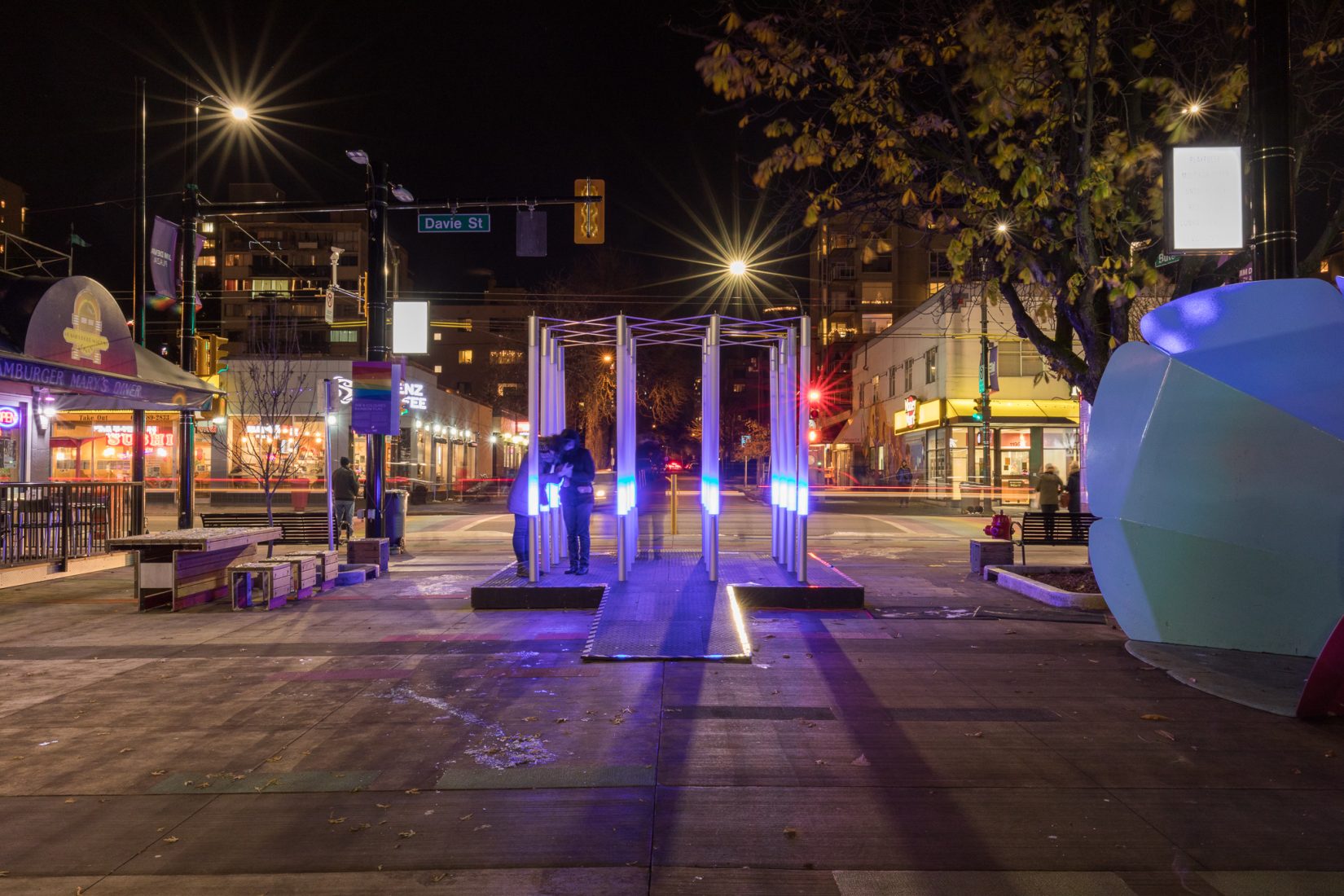 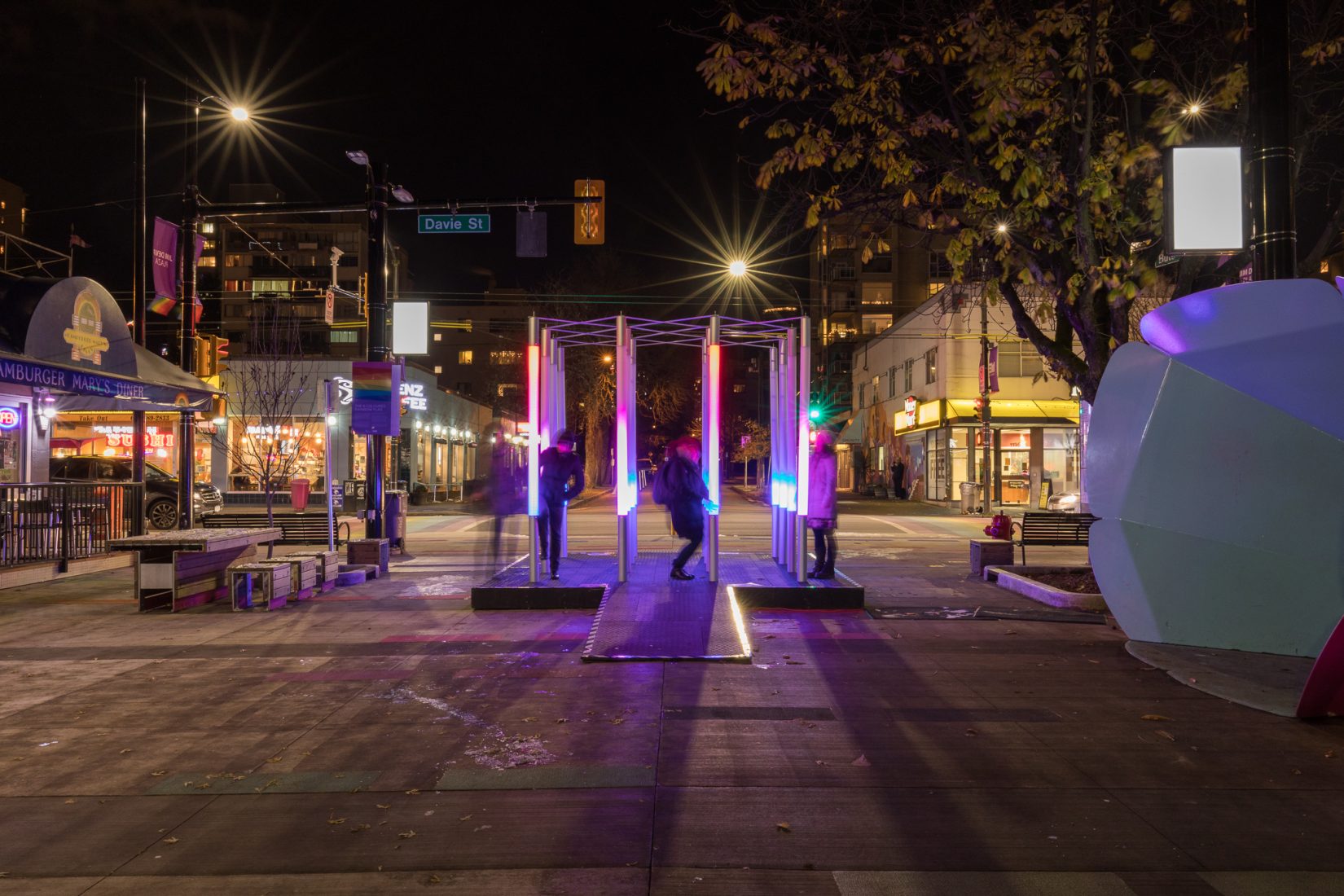 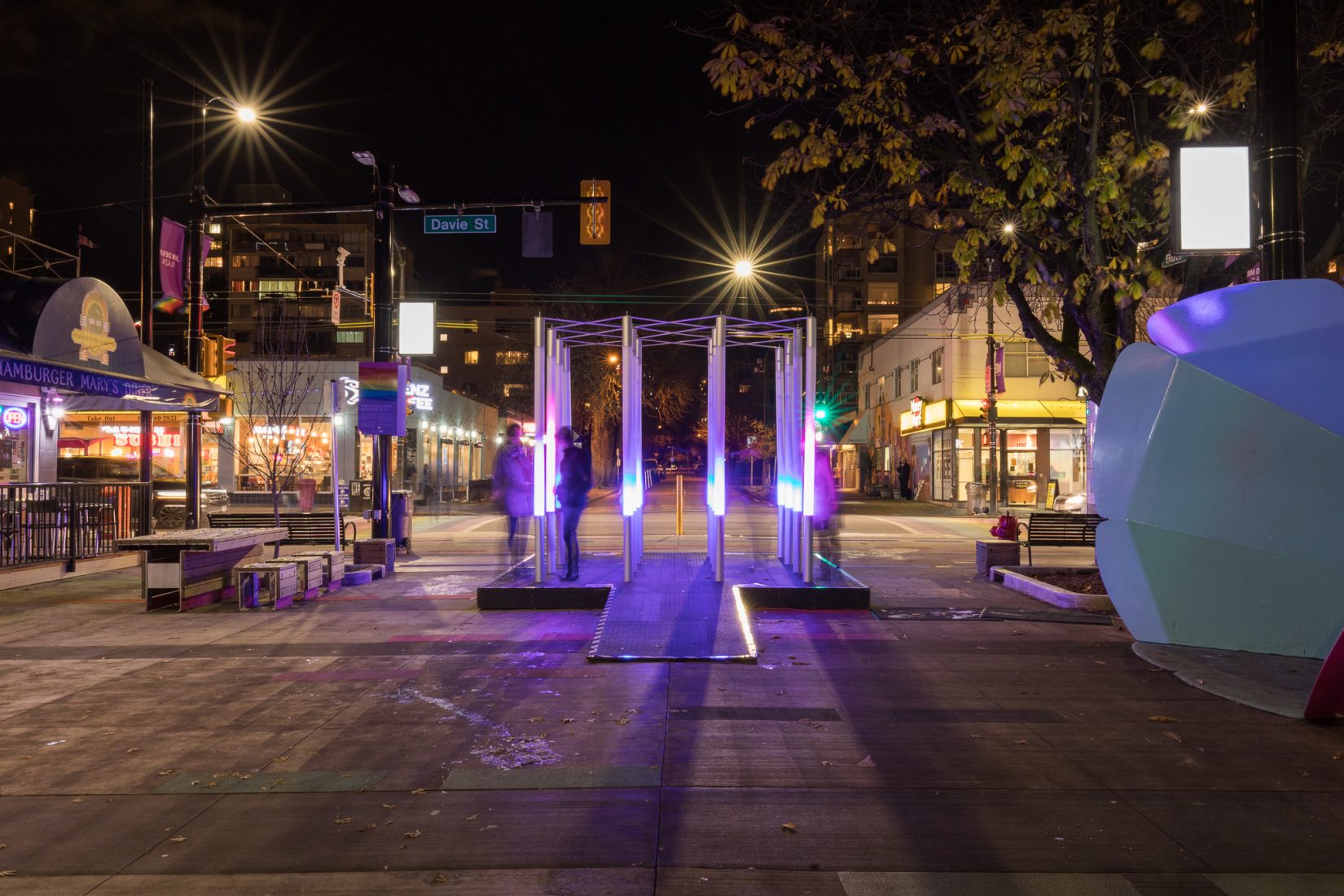 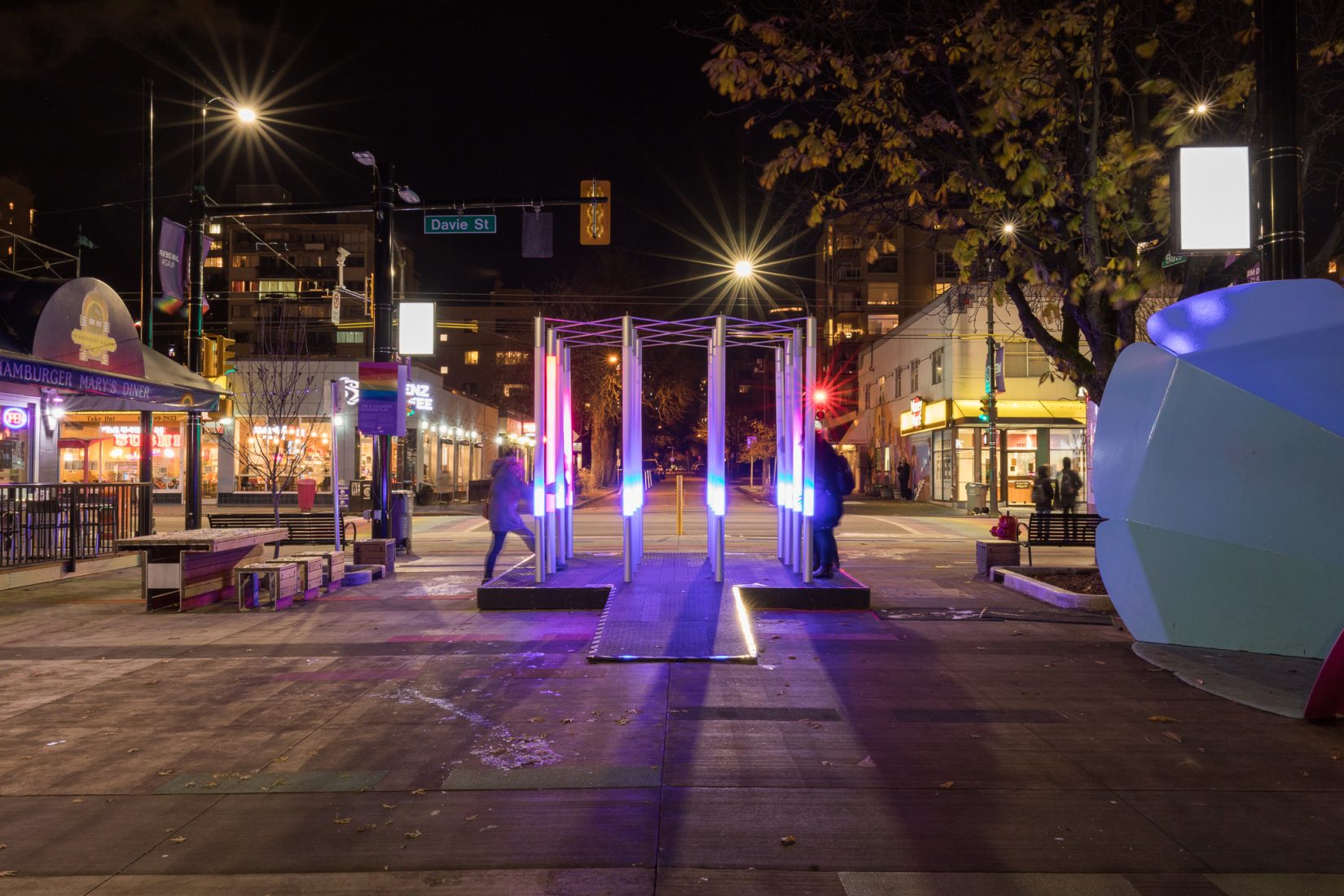 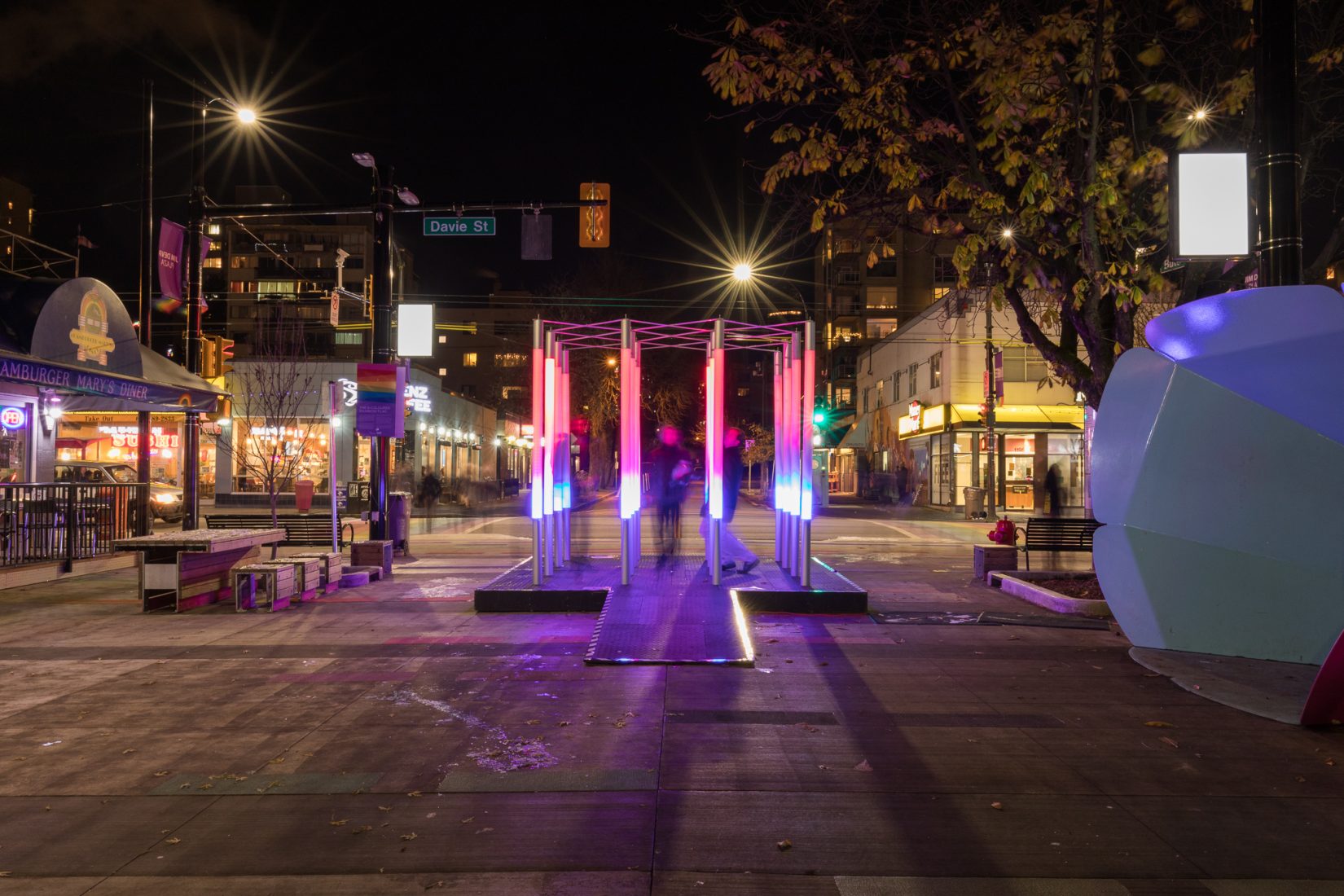 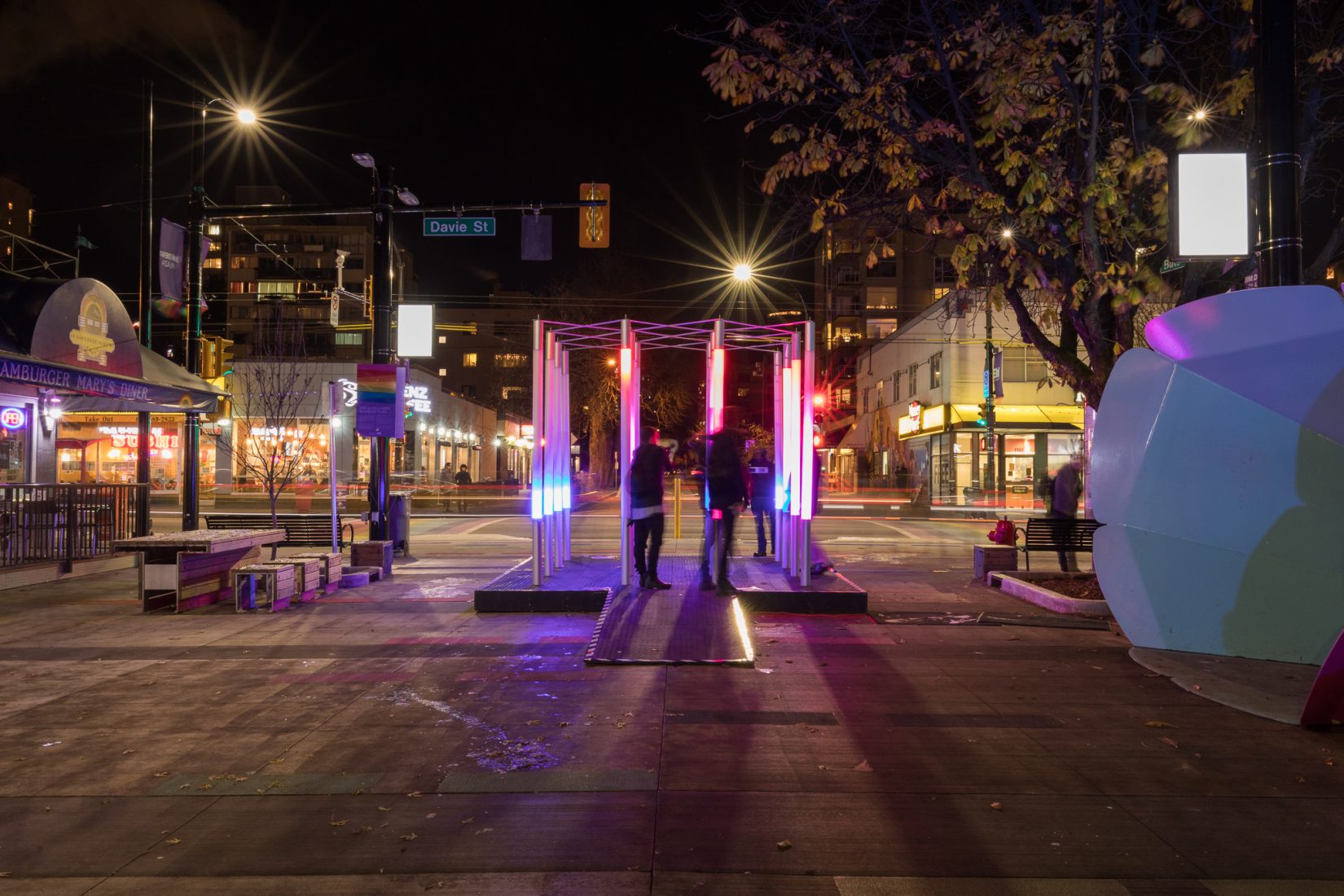 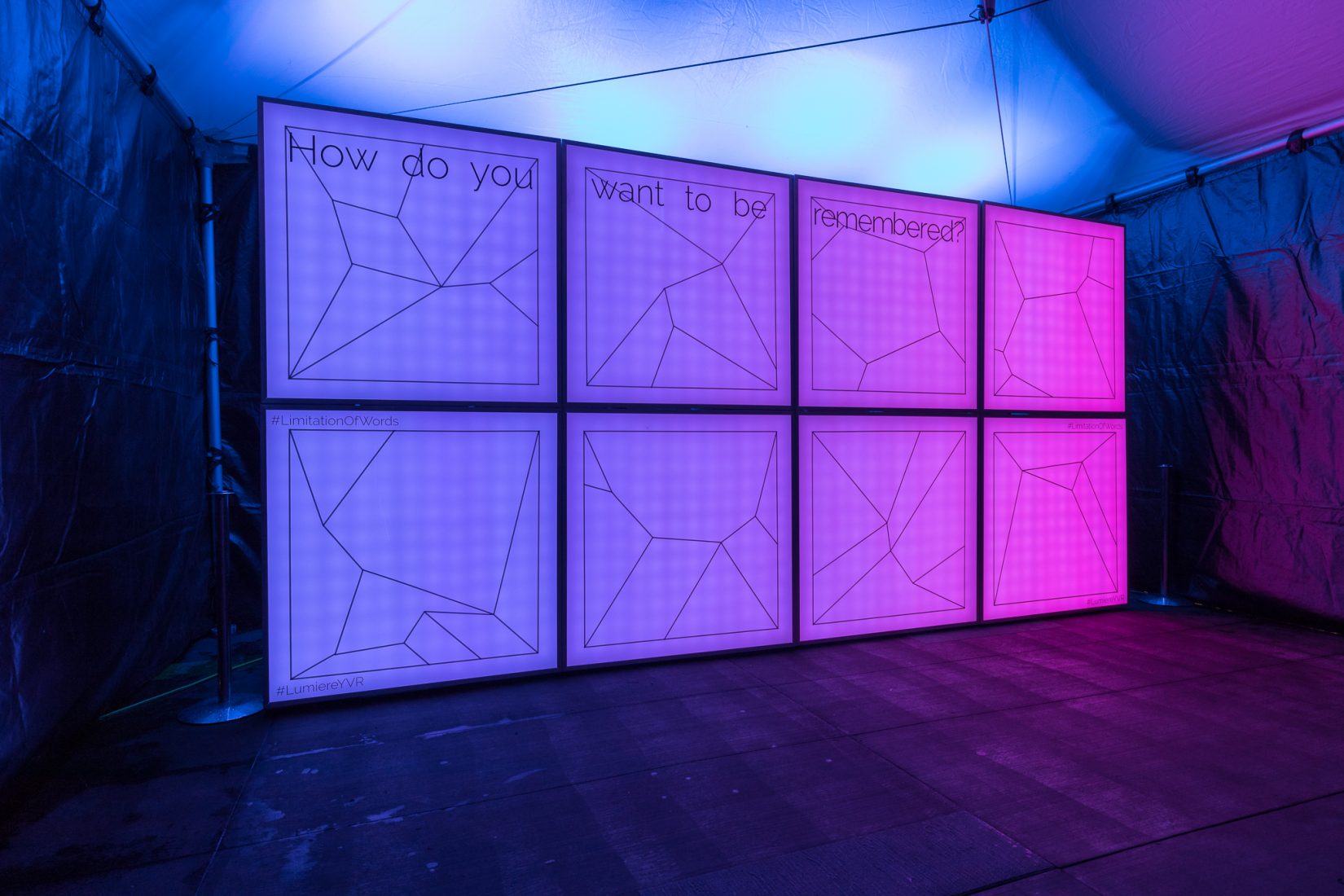 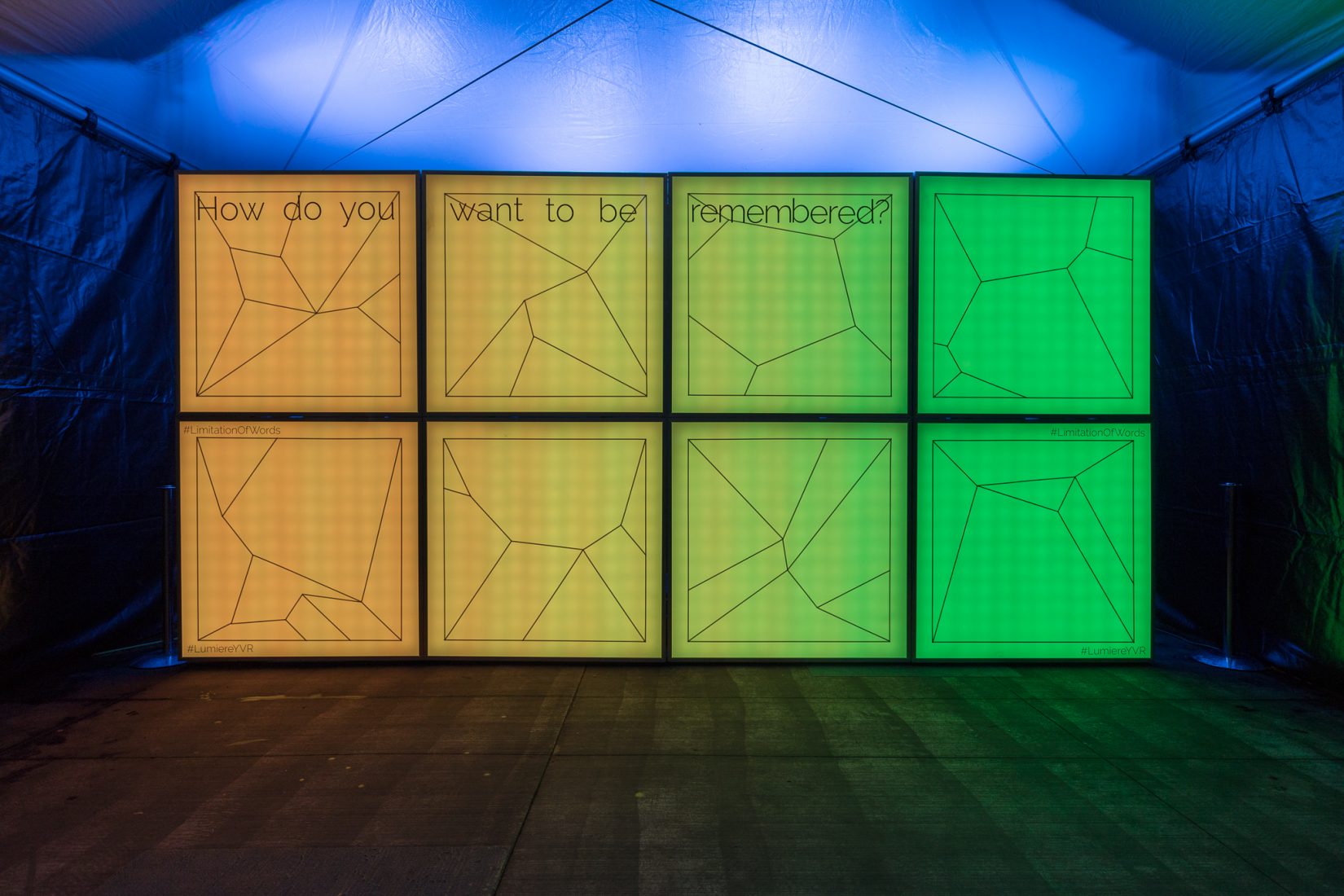 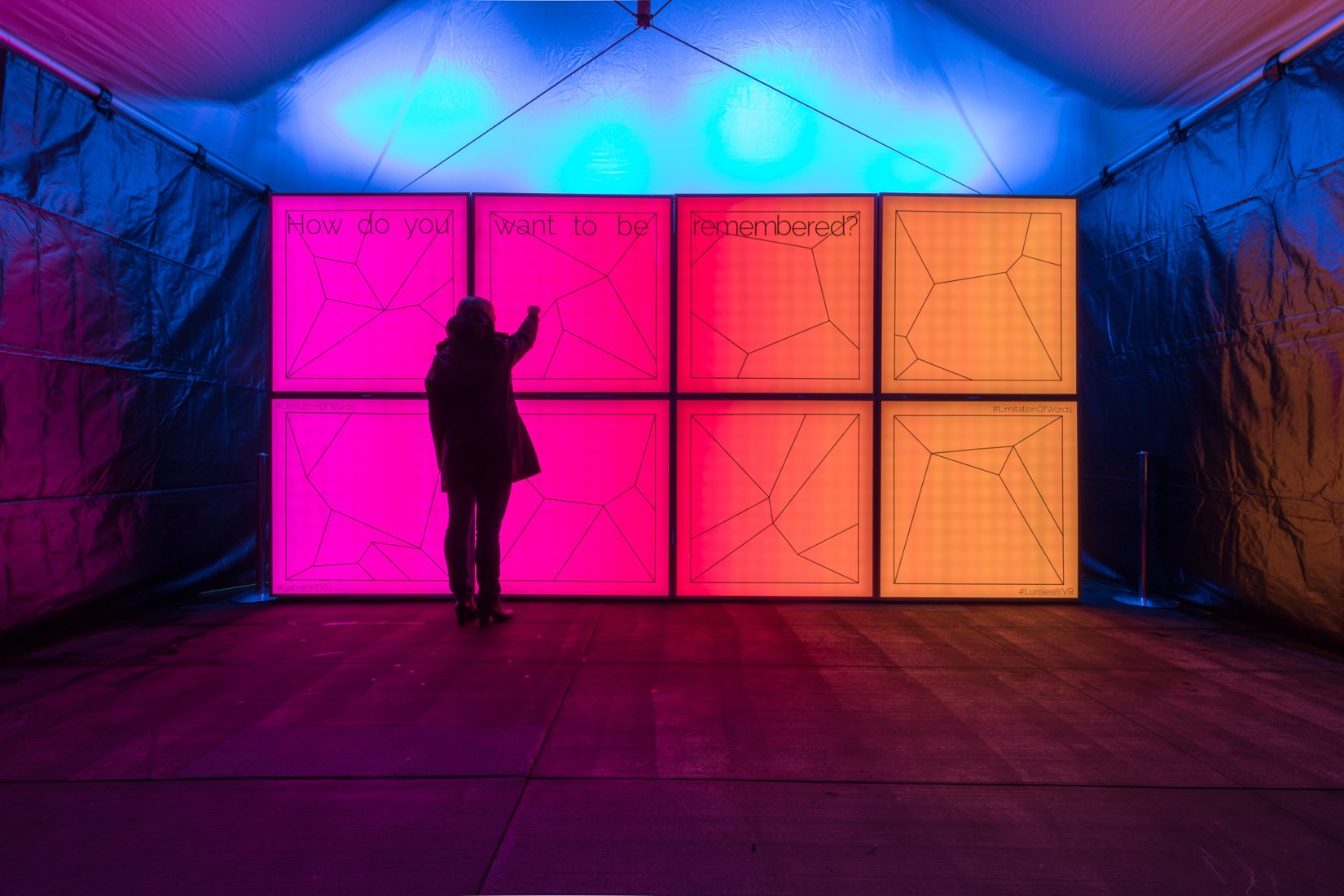 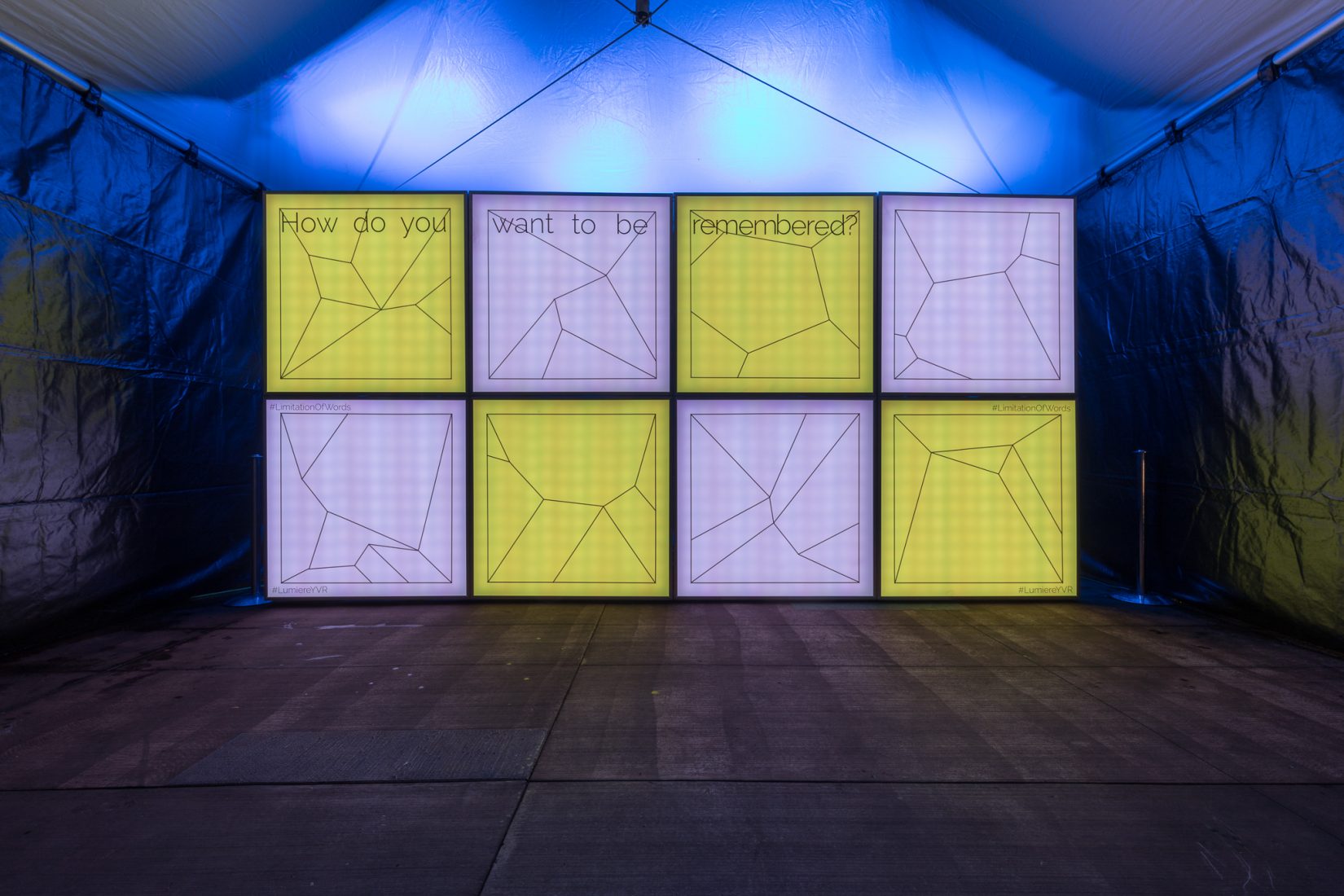 Postures In Protest by Erdem Taşdelen:
Toronto-based artist Erdem Taşdelen’s Postures in Protest, adapted for the Jim Deva Plaza in the form of six double-sided lightbox signs, comprises an assemblage of adverbs that describe the ways in which individuals stage protests in popular uprisings. These adverbs, as modifiers of verbs, indicate how specific actions transpire, pointing to the strength and fortitude of those involved in protest. Installed in a public site that is dedicated to the late Jim Deva, the piece honours the activist’s advocacy for LGBTQ rights and his battle against censorship. It is also intended to encourage a sense of pride in those who are fighting against the social inequalities that still persist today.

Shine With Pride by Tangible Interaction:
Shine With Pride was a participatory light installation that reflected people’s interactions through stunning animated patterns of light and colour.

Comprised of an array of 16 acrylic tubes on a platform with hundreds of responsive LED lights inside each tube, Shine With Pride was an open artwork that invited people to step inside and experiment hands-on. Created to be a piece for the whole community, the installation was open and accessible to anyone.

When no one is interacting, Shine With Pride displayed a soothing, pre-programmed animation. However, as people weaved in and around the array and touched the tubes, the piece reacted by changing colours and displaying energetic patterns. The more that people participated, the more elaborate and colourful the light animations became.

Vision Board by Hfour:
An extension of the Jim Deva Plaza megaphone, and a response to Postures in Protest, this community vision board was a canvas to express oneself through the written word. Included was the call to action, “How do you want to be remembered?’ a very important question that related closely to the life and legacy of Jim Deva.

Jim Deva was a trail blazer, a pioneer, a man that stood up for what he believed. He was a fearless leader who followed through with his vision and challenged the status quo. Fighting for freedom of speech, expression and equality Jim fearlessly battled the justice system and won a case that would change censorship laws and shape Vancouver’s LGBTQ2+ community forever.

About the West End BIA:
The West End Business Improvement Association is an independent, non-profit association created by businesses along the West End’s three primary commercial streets: Davie, Denman and Robson. Their mission is to brand, promote and revitalize the West End.