Life was politics in the last decade, life will be art in the next decade

“I would like to take this opportunity to endorse the candidacy of Mr. Peanut for mayor of Vancouver. Mr. Peanut is running on the art platform, and art is the creation of illusion. Since the inexorable logic of reality has created nothing but insoluble problems, it is now time for illusion to take over. And there can only be one illogical candidate: Mr. Peanut.”

On Saturday, November 15th (fittingly, civic election day in Vancouver) BAF in partnership with Wil Aballe Art Projects presented a one-day pop-up exhibition of work by Vancouver artist Vincent Trasov, commemorating his 1974 mayoral campaign as Mr. Peanut. As part of the exhibition, BAF also created a very limited run of prints featuring the original campaign posters used for the election, remastered and printed in an edition of ten (see below.)

Forty years ago, Trasov ran for mayor of Vancouver dressed as his adopted top-hatted and cane-carrying alter-ego, Mr Peanut. His was an art-centric platform: P for Performance, E for Elegance, A for Art, N for Nonsense, U for Uniqueness, and T for Talent. He made no speeches or lofty claims to political reform but rather tap-danced his way into the hearts of voters in an absurd and clever campaign. He didn’t win the election (ultimately receiving approximately 4% of the vote; incumbent Art Phillips took office) but his twenty-day performance attracted a surplus of media and the consideration of City Hall, while bringing Vancouver art and politics to national and international attention. The performance was notably featured in Esquire and Interview magazine.

The show, celebrating the campaign’s 40 year anniversary and hosted in a currently-in-transition condo development by the Cambie Street Bridge, featured footage from the 1974 civic election, video of Trasov as Mr Peanut in New York and a collection of Trasov’s drawings of the character made over several years. The drawings (small, pen and ink compositions) illustrate the artist’s fantasies of Mr Peanut playing the doctor, painter, adventurer, traveller, posing provocatively in historical ruins et cetera. Trasov adopted his character in 1969 at a time when a generation of young artists were taking aliases to complement conceptual practices that emphasized performance, repetition, absurdity and chance. Trasov was purportedly attracted to the image of Mr. Peanut (the advertising logo and mascot of the American snack brand Planters) “because it was easy to draw.” He constructed a paper mache costume and embodied the shelled character about town as a means to explore persona, anthropomorphism, and mythology through performativity.

Trasov was a founding member of the Western Front in 1973 (along with seven other artists: Martin Bartlett, Mo van Nostrand, Kate Craig, Henry Greenhow, Glenn Lewis, Eric Metcalfe and Michael Morris) who opened the centre for the production and presentation of new art activity. They aimed to create a space for the exploration and creation of new art forms, and it quickly became a gathering place for poets, dancers, musicians and visual artists interested in exploration and interdisciplinary practices. As a focal point of experimental art practice through the 1970’s and 80’s, the Western Front played a major role in the development of electronic and networked art forms in a national and international context. In 1969, Trasov founded the Image Bank with Michael Morris, a system of postal correspondence between international artists for the exchange of information and ideas. “It was a forerunner to Facebook,” Morris said. “It was an early social network.” The intention of the Image Bank was to create a collaborative, process-based project in the hopes of engendering a shared creative consciousness. In 1991, Trasov and Morris founded the Morris/Trasov Archive, currently housed at Morris and Helen Belkin Art Gallery to research contemporary art and communication.

Trasov has had numerous international exhibitions and is represented in public and private collections in both Europe and North America. He presently resides and works in Berlin and Vancouver. Concurrently, Morris and Helen Belkin Art Gallery and the Walter C. Koerner Library at the University of British Columbia has an exhibition of artifacts from the campaign at Koerner Library, 1958 Main Mall. It will run until January 4, 2015.

The exhibition was made possible in partnership with the Burrard Arts Foundation and with generous assistance by Port Capital Group. 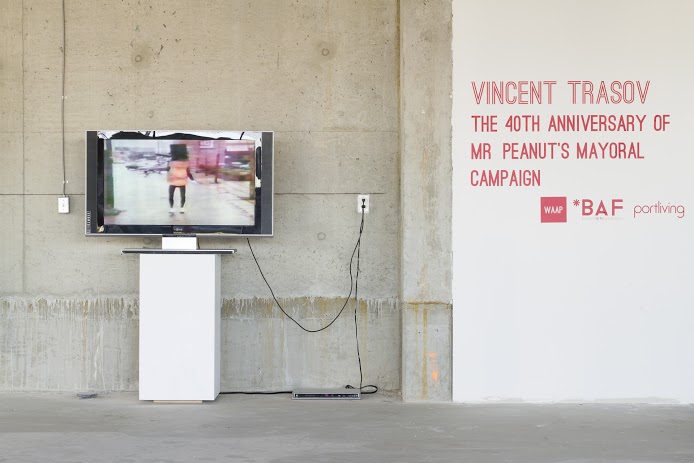