It can be tempting to think of art and science, technology and craft as entirely separate fields; foreign worlds that view each other only from the outside. In fact, some of the most transcendent work in any discipline comes when these artificial boundaries are broken down. Our newest resident artist, Matthew Talbot-Kelly, has demonstrated this throughout his diverse career, masterfully working in mediums from architecture to assemblage to film.

Despite this versatility, Talbot-Kelly’s work remains distinctive across all mediums. Seeing no dividing line between the realms of tech and art, the artist has created virtual reality experiences, narrative apps for iOS, and short films that blend physical models and computer animation, in addition to more traditional, material visual mediums such as sculpture, assemblage and installation.

Talbot-Kelly’s short films ‘Blind Man’s Eye’(2007) and ‘The Trembling Veil of Bones’(2010), for which he acted as writer, director, and production designer, blend computer animation with collaged live-action models to create a dreamlike, unsettling effect, bringing dimensionality to the usually flat medium and an imperfect, handmade appearance to a form of animation that often appears slick or even impersonal.

This focus on creating experiences and environments extends to Talbot-Kelly’s visual art, as well. ‘Blow 24 FPS’, a 2015 project installed in Gibsons, BC, is another work that demonstrated how seamlessly Talbot-Kelly is able to blend craft and technology. The installation used found materials such as plywood, doors, packing crates, and even cardboard, into which he burned a series of sequential images using a blowtorch. This labour intensive process allowed the found and altered objects to act as frames, creating an animation of a bird in flight when displayed together in quick succession. The physical installation comprised all the panels joined together in a wavelike formation, and a video on the artist’s website demonstrated the animated effect.

In his 2013 pieces ’After Motherwell and ‘Digital Motherwell’, Talbot-Kelly transformed acrylic studies on paper into digitally rendered three-dimensional brushstrokes. That piece then became ’graffiti loops’(2014), a large format wall mounted screen displaying these marks in the form of animated, interactive loops, able to be controlled by the viewer via tablet.

A true multidisciplinary artist, Talbot-Kelly also holds a Bachelor of Architecture, and his 2016 project ‘Artist Studio/Tiny House’showcases these skills. The work comprised a complete live/work space in just 290 square feet, containing a kitchenette, washroom, and working space. The house’s layout is tapered both vertically and horizontally, creating an optical illusion to make the already tiny space appear even smaller. Fulfilling the structure’s intended functionality, Talbot-Kelly has been inhabiting it on weekends for the past six months. “For me, an unrealized idea isn’t nearly compelling as one fulfilled,” says the artist. This focus on embodiment and corporeality is a common thread throughout his body of work.

Other projects include ‘articulated subtext’(2016), a virtual reality experience of swimming through a sea of text, and ‘Circling Towards a Possible Present’(2017), an interactive installation work currently in production which deploys 3-D game engine technology to drive three slow motion interactive portraits, to be presented via tablet and projector.

While Talbot-Kelly’s upcoming Burrard Arts residency project is still coming together, one can expect that like his previous work, it will blend art, craft, construction and technology to fascinating effect.

Matthew Talbot-Kelly’s exhibition will run from July 6 to July 29, 2017 at BAF Gallery, 108 E Broadway. Visit http://www.matthewtalbotkelly.com/to find out more about the artist. 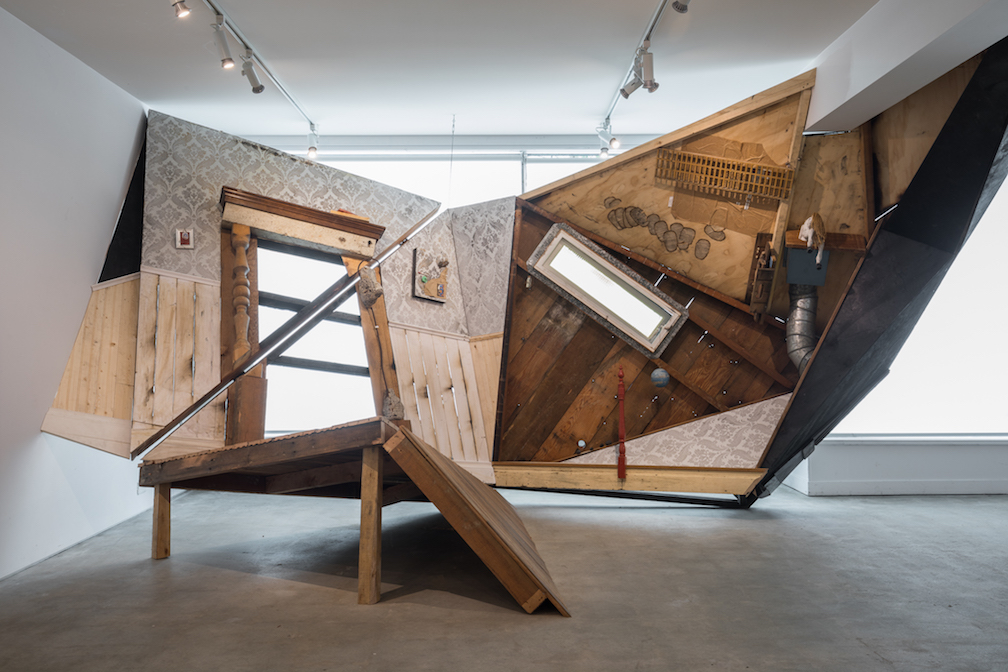