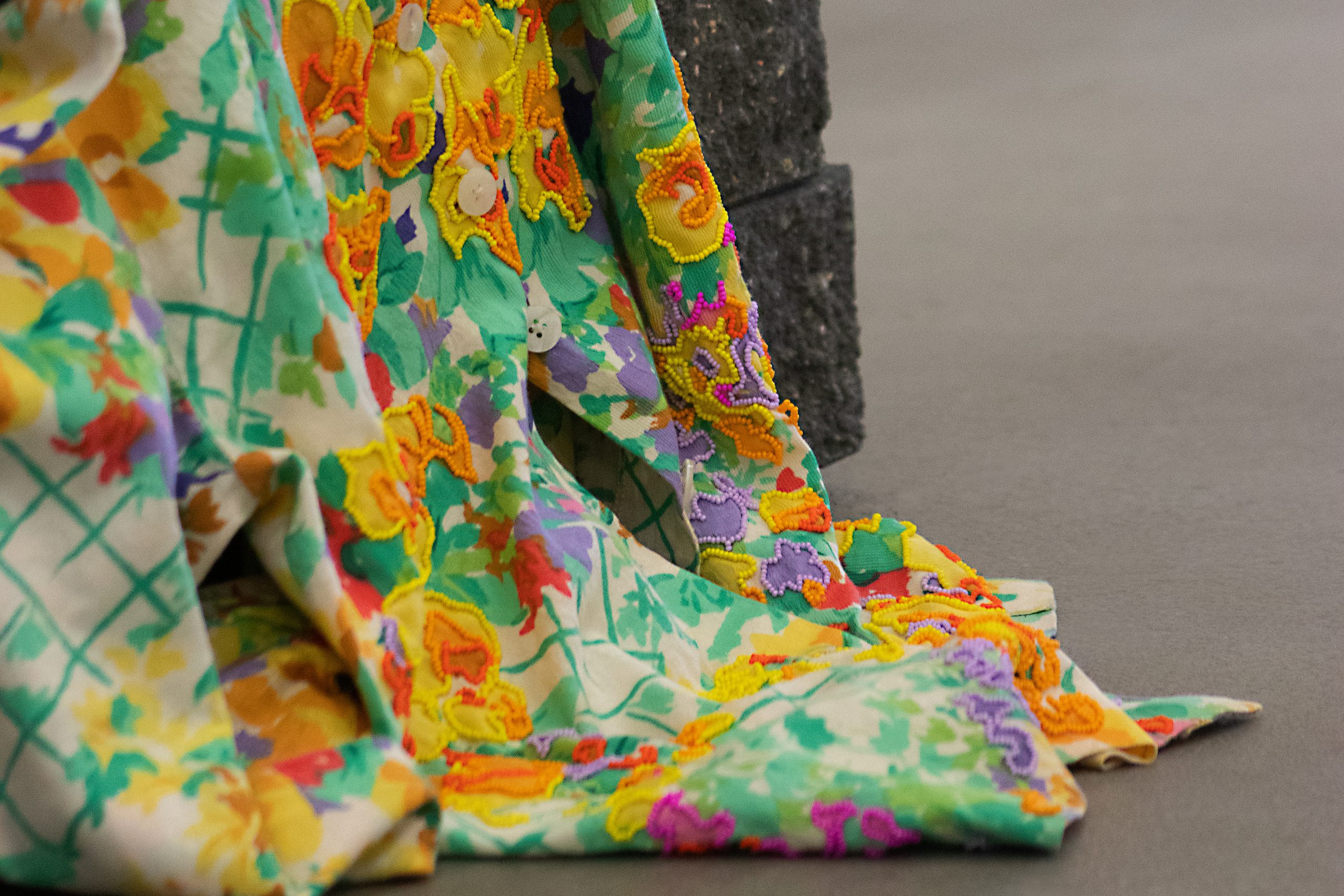 I sit at my kitchen island that my partner and I bought from Ikea, the keys of my computer clacking as I sip coffee out of a hand-thrown mug I took from my parents’ house. Beside me sits a tall stack of books I’ve meant to read this summer, toted around with me as I move from seat to seat, table to table.

Zoom sits open in the background while I type and a sliver of the window peeks out from behind this text you’re now reading, bookmarked in case my guest should enter the call while I write. I find myself analyzing the objects around me while I wait, wondering what they could convey about me to the person who will soon be offered a window into my domestic space—the stage upon which my everyday plays out.

Maria-Margaretta enters the zoom call right on the dot and the hour set aside for our talk glides by easily, leaving no stone left unturned. She is generous and charming. Hailing from Treaty 6, she is a Métis artist with a keen eye for unsung cultural symbols represented in our lives as everyday objects—keener still is her understanding of the meanings these objects can generate. 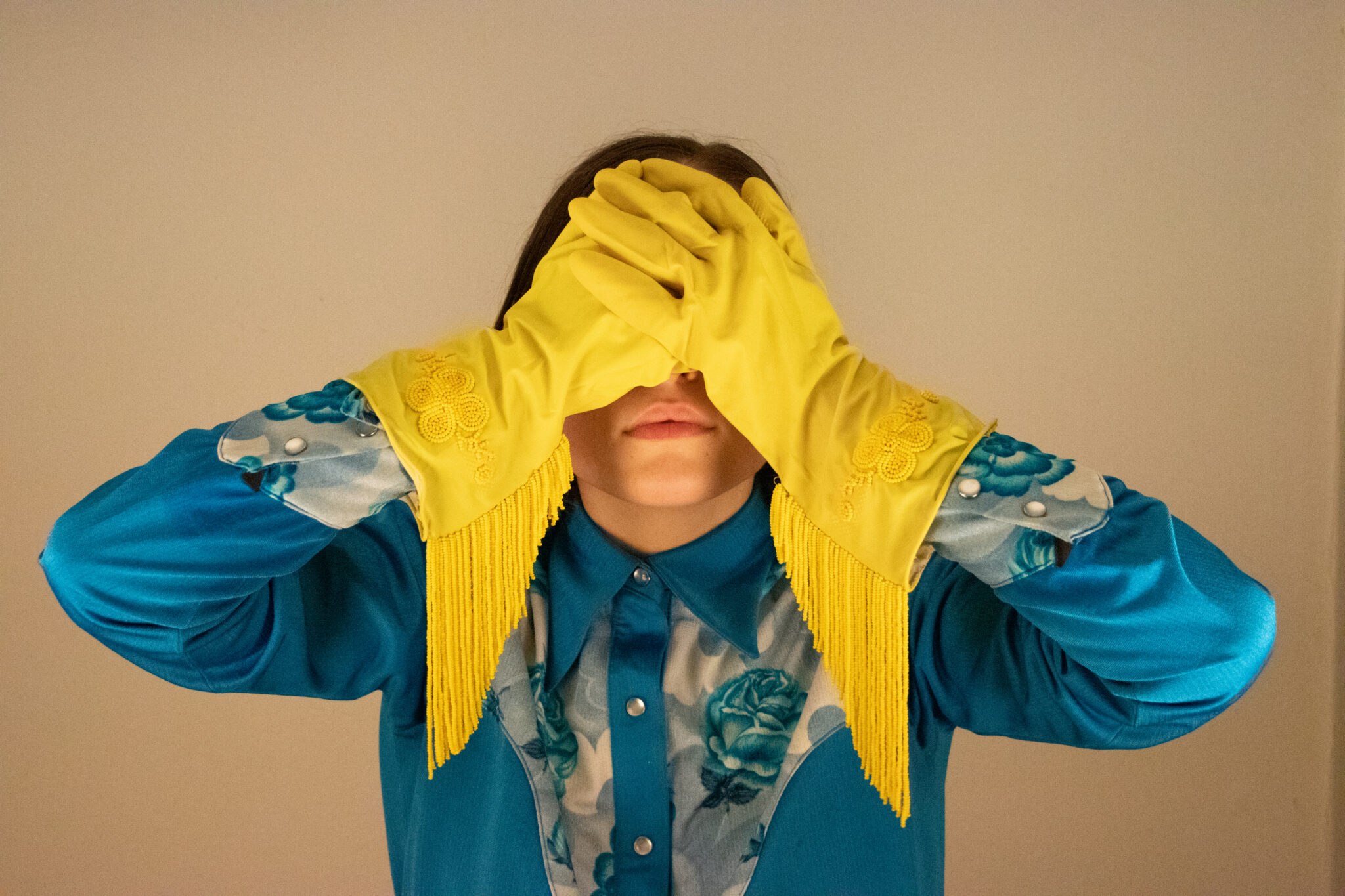 We speak of many things, visiting by exchanging protocol and pleasantries, but also acknowledging the weightier parts of existing as an Indigenous person in what is commonly known as Canada, and in the institutions we have both moved through as artists, students, and academics—the meaning of belonging, the anxiety of pretendians, and of being both the signified and signifier for entire peoples within the walls of arts organizations.

I became aware of Margaretta’s work earlier this year while scrolling through the explore page on Instagram. The first of her works that I saw consisted of a plastic bag with a purple floral graphic and the words “Thank You! HAVE A NICE DAY!” printed on its side. Over the dark bruises of roses, metallic lavender beads were sewn to highlight the print’s edges, bordering between the purple ink and the translucent white plastic. 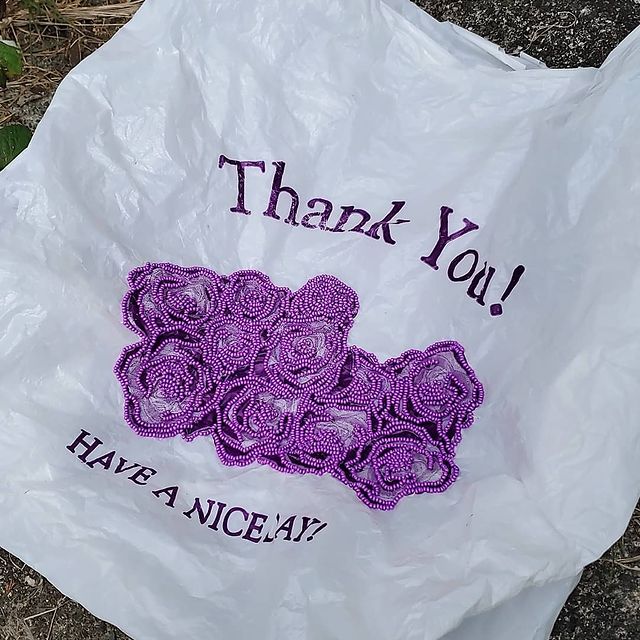 This was a fortuitous introduction, as this work catapulted me backward in time to my first reading of Ursula K. Le Guin’s essay “The Carrier Bag Theory of Fiction,” in which Le Guin muses over the nature of storytelling, and how her approach differs from that of her contemporaries. In the essay, Le Guin observes that stories are generally predicated on conflict, are constituted by Heroes and their actions, and feature the Hunter and not the Gatherer. For Le Guin, a story should be much more like a basket or a bag in which to carry things, versus a spear to be thrust.

And here is Margaretta’s carrier bag of art—a grocery bag given the cultural treatment usually reserved for regalia—plastic festooned in articulate beadwork. It is an object that is easily recognizable, but when beaded calls up specific cultural contexts. Many northern Indigenous communities live in food and resource deserts, but their love and collective care persists. This regaled bag carries gratitude. It is a vessel that can hold the histories of those who look at it. It is a sign of sovereignty.

Many of the objects Margaretta integrates into her work are like the “Thank You!” bag, recognizable to a wide range of audiences while colliding with Métis and Indigenous practices. She tells me in our discussion that access to culture and traditional objects is important to her, and this shows in her choice of materials. In her work, she selects objects that are widely known and then places them in new contexts—a gesture reminiscent of Brian Jungen’s mask series made from Nike sneakers, Prototypes for New Understanding (1998-2005).

To Margaretta, beading is a community practice and a site where the contemporary and traditional converge. She shares with me that many objects seem inherently Métis to her, despite the fact that they are not traditional cultural objects—sights of the everyday, such as canned tomatoes, or a taxidermy bear. I am reminded of Eden Robinson’s novel “Monkey Beach,” and the Elvis Presley clock hanging in the main character’s kitchen in Kitamaat. To Margaretta, the home or domestic sphere is an archive of the unnoticed—Carnation condensed milk bears witness to the quiet dramas of the home, with aunties or kookums tapping their cigarettes into an ash tray while recounting near and far histories. 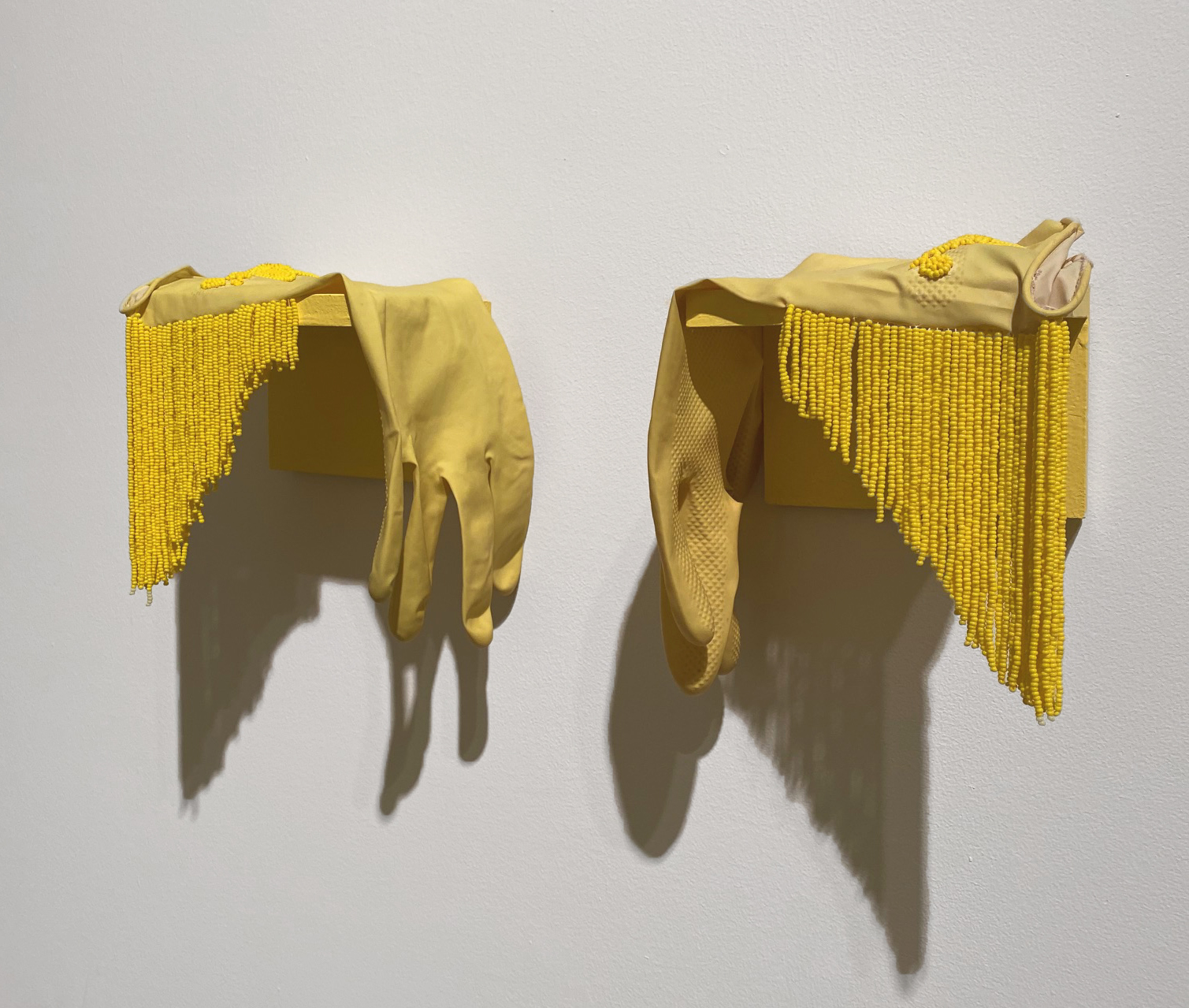 “Kitchen Table Methodologies” Margaretta tells me. She began beading through visiting—a mentorship enacted in front of TV dinners, while talking over the phone, or on the front porch. It is a process of plasticity that can be practiced in solitude or with community. By beading these banal overlooked objects, Margaretta hopes to ease access for Indigenous kin to cultural objects so often made inaccessible, both in her choice of materials that are easily at hand, but also in how the audience is meant to interact with the finished piece.

So often, cultural objects are housed in museum or gallery archives while the communities where the objects were produced are disenfranchised, the objects no longer serving their intended purpose. Colonialism seeks to eradicate the people but preserves their objects. Again, sovereignty is conjured up in our discussion—sovereignty over our own material culture, to steward that which we call into being. Margaretta calls this both “Objects for Future Ancestors” and the “New Michif,” tracing a genealogy of the beaded flower—the original being on hide and symbolizing the family, then meme’d onto a vest, and then all the way onto a plastic bag. 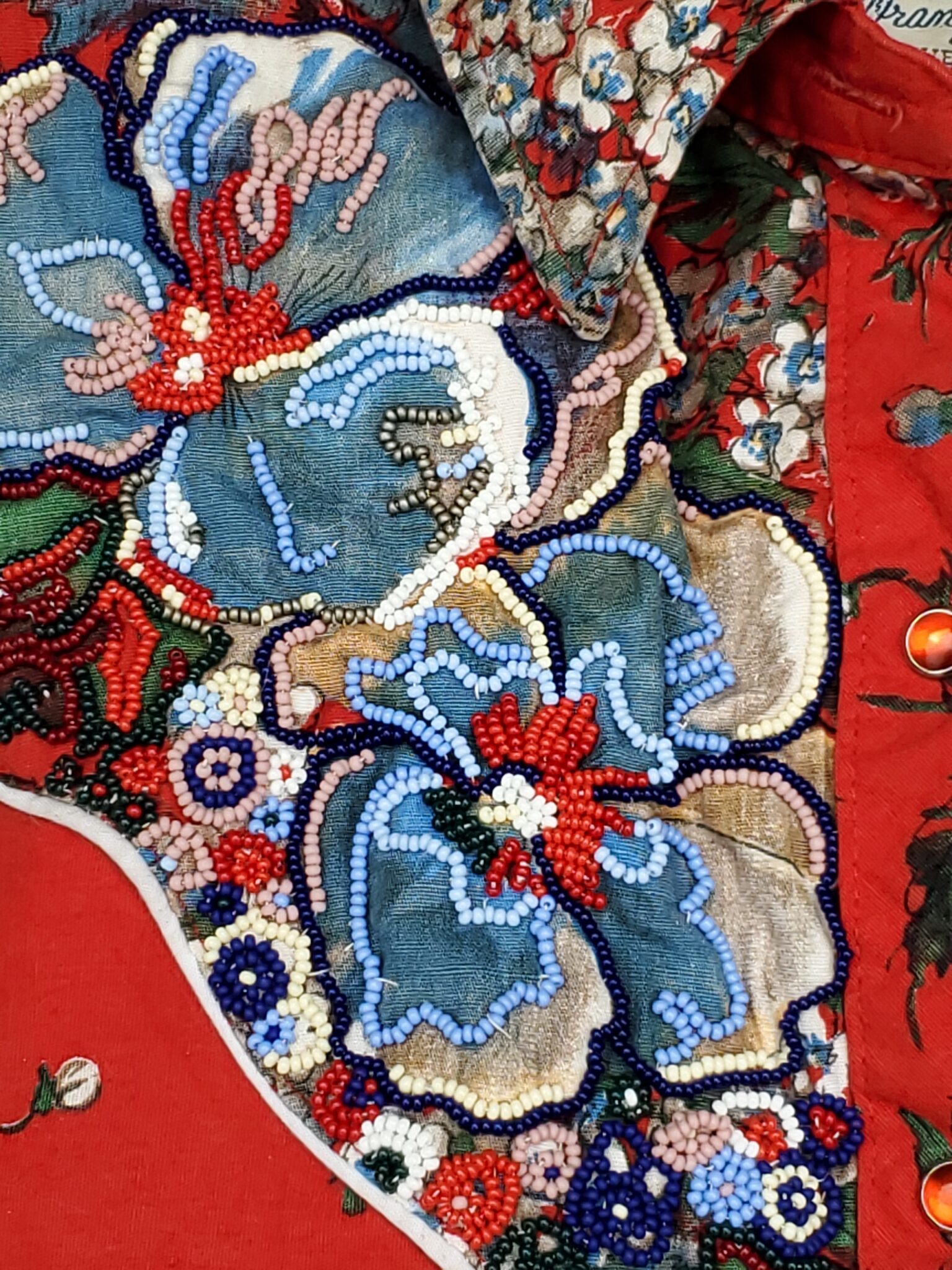 We speak of hybridity, too—this confluence where Margaretta situates herself, where the settler and the settled get upset, where yellow dish gloves can be regaled with precious beadwork and be used as both sacred costume and everyday tool. Sovereignty is donned and practiced in washing dishes, in caring for those in the community through tending to the spaces of our interiors. The cupboard is as much an archive as the community who surrounds it. It is as much an act of resistance as it is an act of nourishment. The everyday can be a ceremony, and is a worthy site of knowledge transmission.

At last, we come full circle in our discussion. To close out the wheel of visiting, I ask what Margaretta has carried forward from her practice into her residency at BAF. The home, and its residents, still sit in her view, quite clearly. She recounts to me her intent to reconfigure domestic scenes from her own history into an installation in the gallery—transporting sites from her past where visiting has occurred, such as the front steps of her house, or a folding chair. Extending her acts of hosting to the gallery setting, she invites the audience to take a load off and to imagine sitting, to perhaps visit with her as she recounts stories of lives lived.