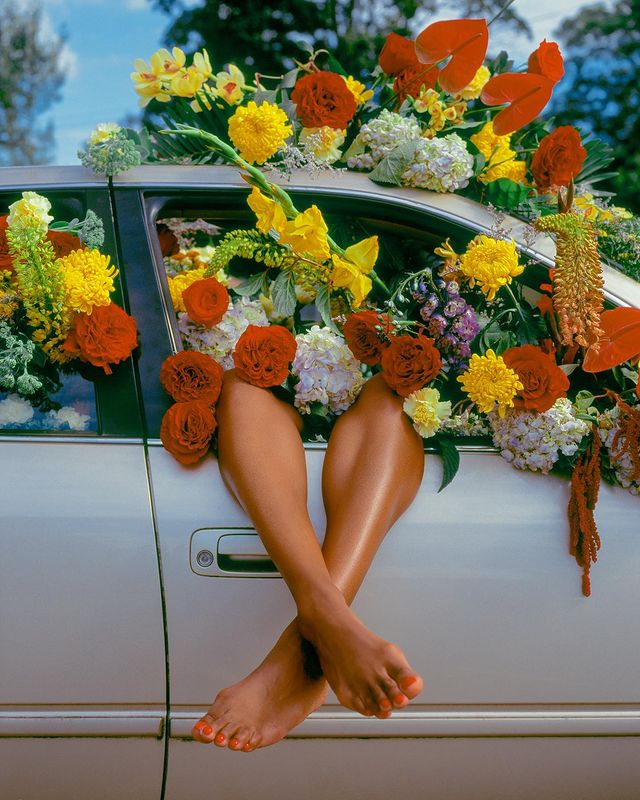 Kriss Munsya’s art practice is a meditation on memories. Born in the capital city of the Democratic Republic of Congo, Kinshasa, and raised in Brussels, Munsya has been a Vancouver resident since 2019. His work focuses on the role of race and gender in the construction of identity and memory. Through photography and prose writing, he not only probes but also recreates his memories of racial or gendered discrimination and, through a process of reconstruction, works to actively shift their meanings. 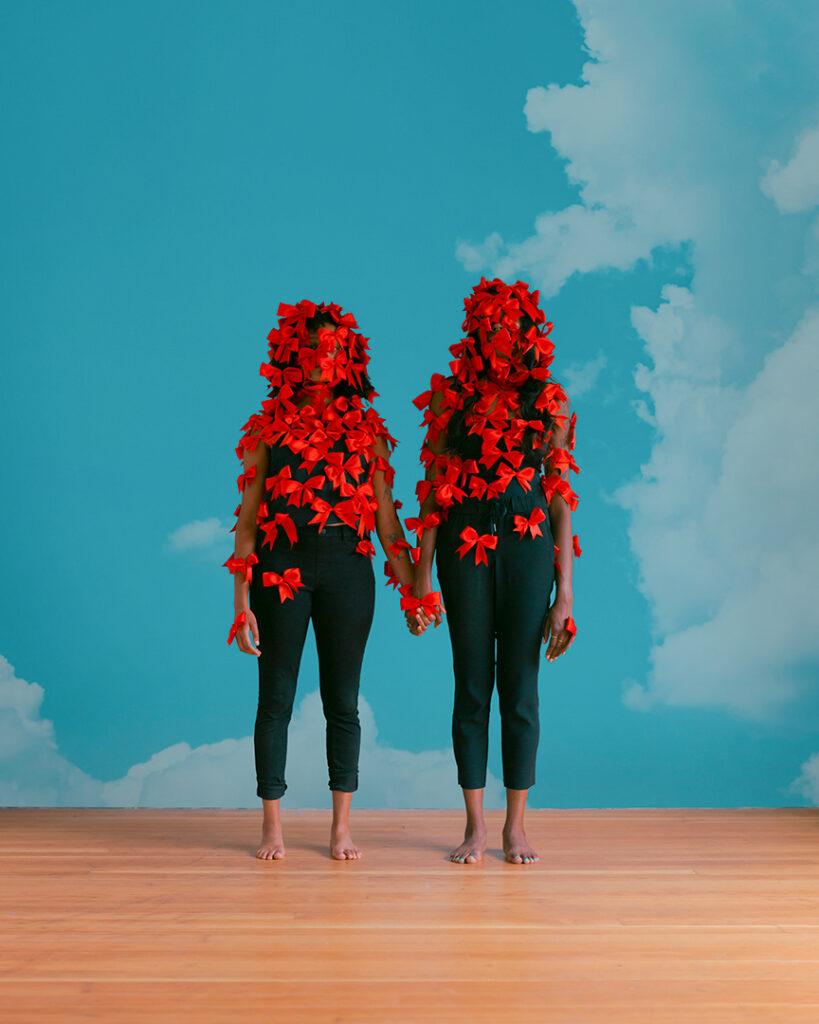 Munya’s latest series, THE ERASER, shown at the Pendulum Gallery, is a vibrant photographic oeuvre brimming with florals, mirrors and colour-blocked garments set against highly manicured backdrops—pictures which purposefully invoke Afrofuturist aesthetics. When asked about his visual references and the artists who inspire him, Munsya shares that most of his inspiration comes from things that are not visual. Born with synesthesia, a perceptual phenomenon where separate cognitive pathways fire together, Munsya considers colour, sound and emotion as intimately linked. He crafts his photographs to be aesthetically captivating, to draw the audience in, before slowly revealing the political undercurrents beating strongly beneath. His punchy but nuanced aesthetic speaks to his diverse creative background—not only an artist, but also a video producer and graphic designer. The photographs are often permutations of a recurring gesture. Black models, immaculately decked out in suits, dresses and leotards, have their faces obscured by veils that come in many forms, from flowers, to red velvet bows, or mirrored dots. 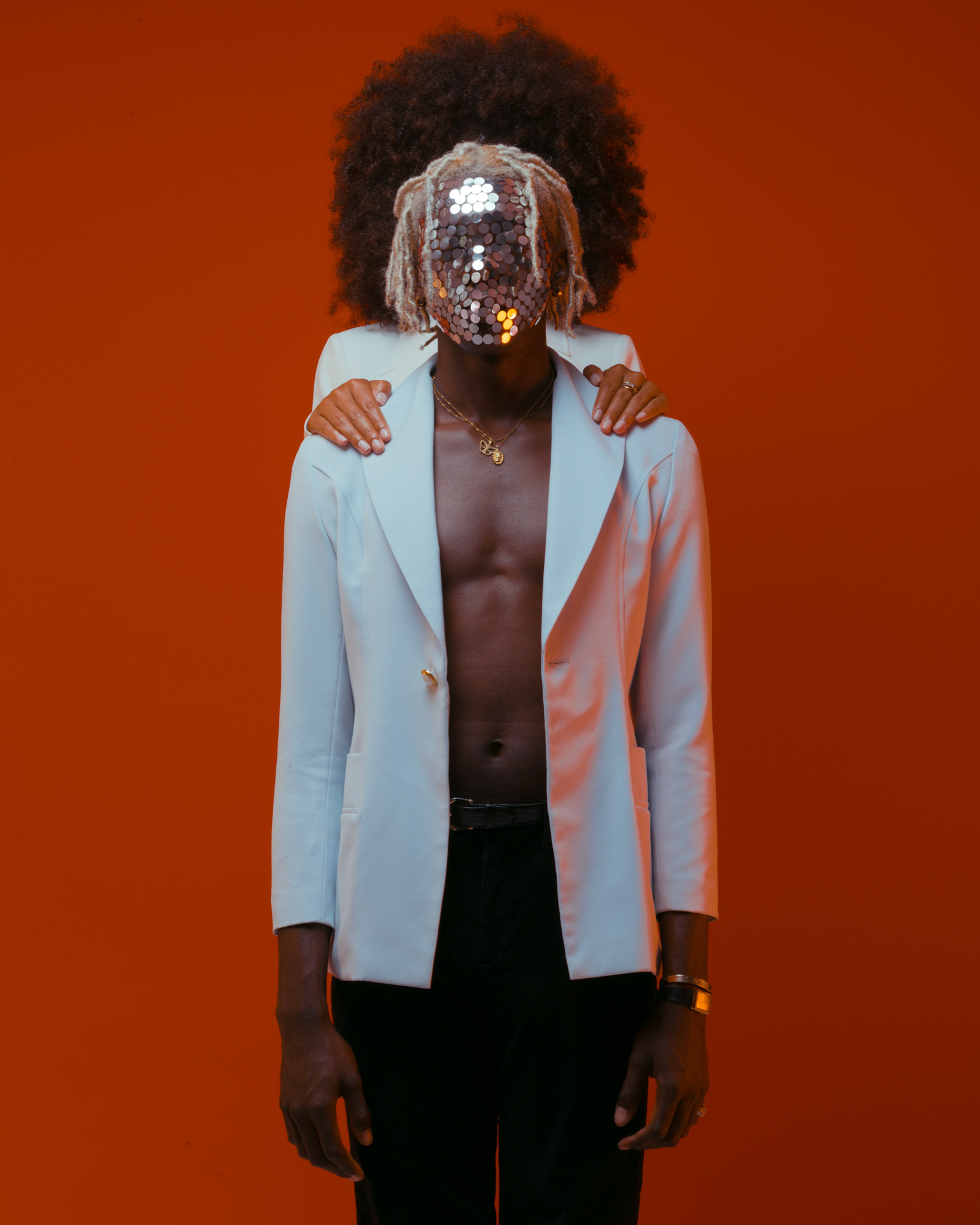 Munsya was originally drawn to photography for its reputation as an honest medium—it has the capacity to reproduce images close to how we see them. Yet so much of Munsya’s work involves his intervention into what we the audience see. In one image from THE ERASER, flowers erupt out of a mid-2000s-era hatchback, windows rolled down with blooms spilling out and reaching upwards in the warm sunlight. Beneath the flowers, two pairs of shiny melanated legs hang over the doors, with hydrangeas, gerbera daisies and orchids resting against them. A short piece of prose accompanies the image, recounting the experience of a young Black boy on a road trip with his family. While staying at a broken-down inn, the boy witnesses the starkly contrasting economic experiences of Black and White travelers—across the highway, a fence separates his family’s inn from a pool surrounded by White people luxuriating amidst opulent flowers. What is shown and what is written correspond to each other, but we understand the photo differently now—the flowers that were once whimsical become a tangible stand-in for wealth and luxury. 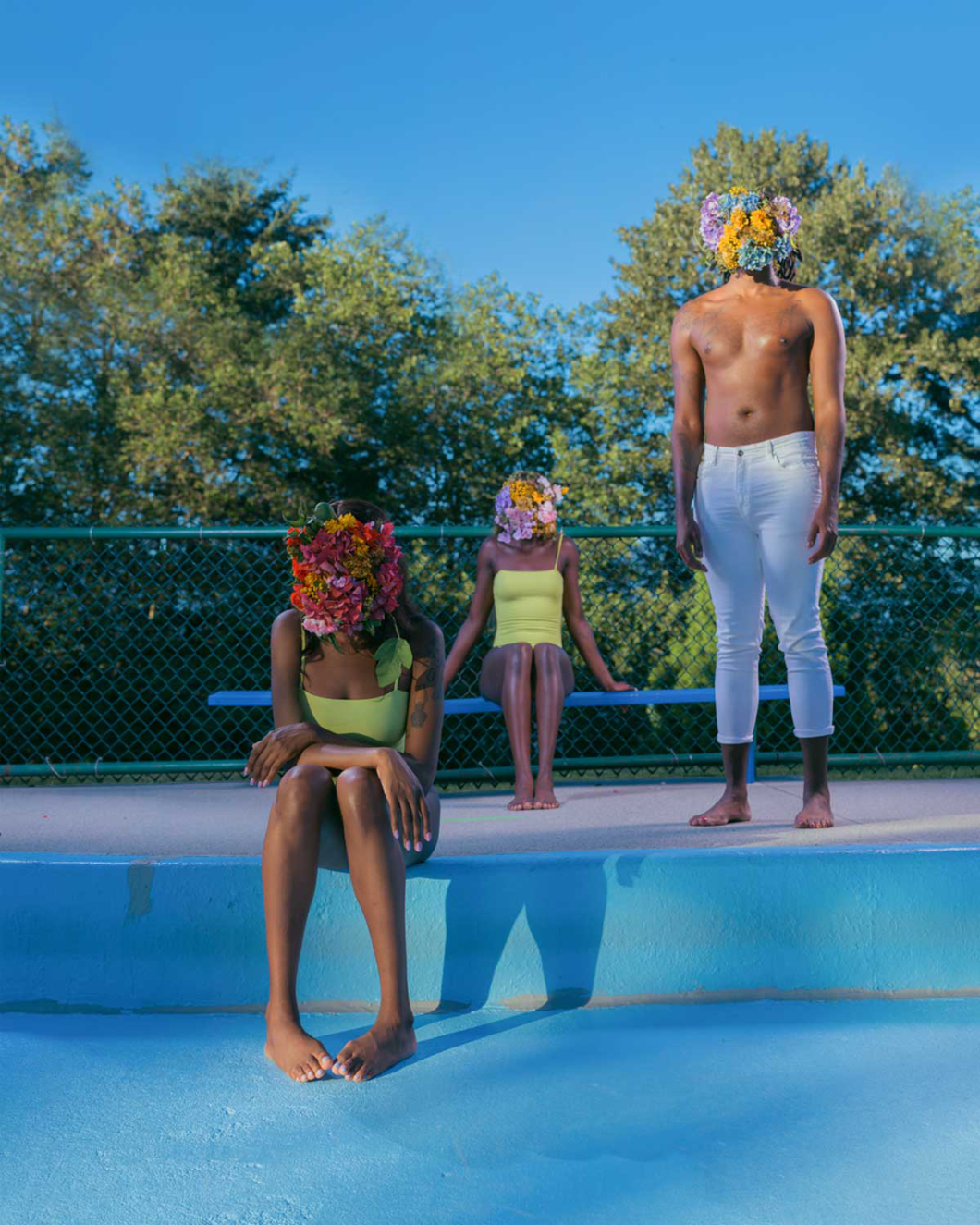 Munsya shows that erasing can work in a variety of ways. The act of inserting something new erases a lack—the flowers that are unavailable to the boy in the prose writing are now billowing out of the family car in the photograph.

It is clear that part of what is being erased in the series is identity, but this raises the question of who is doing the erasing, and for what reason? Could Munsya’s choice to obscure his models’ faces be a rejection of the White gaze, or is the work asking us to reflect on the paradox of both over and under-representation of the Black body? 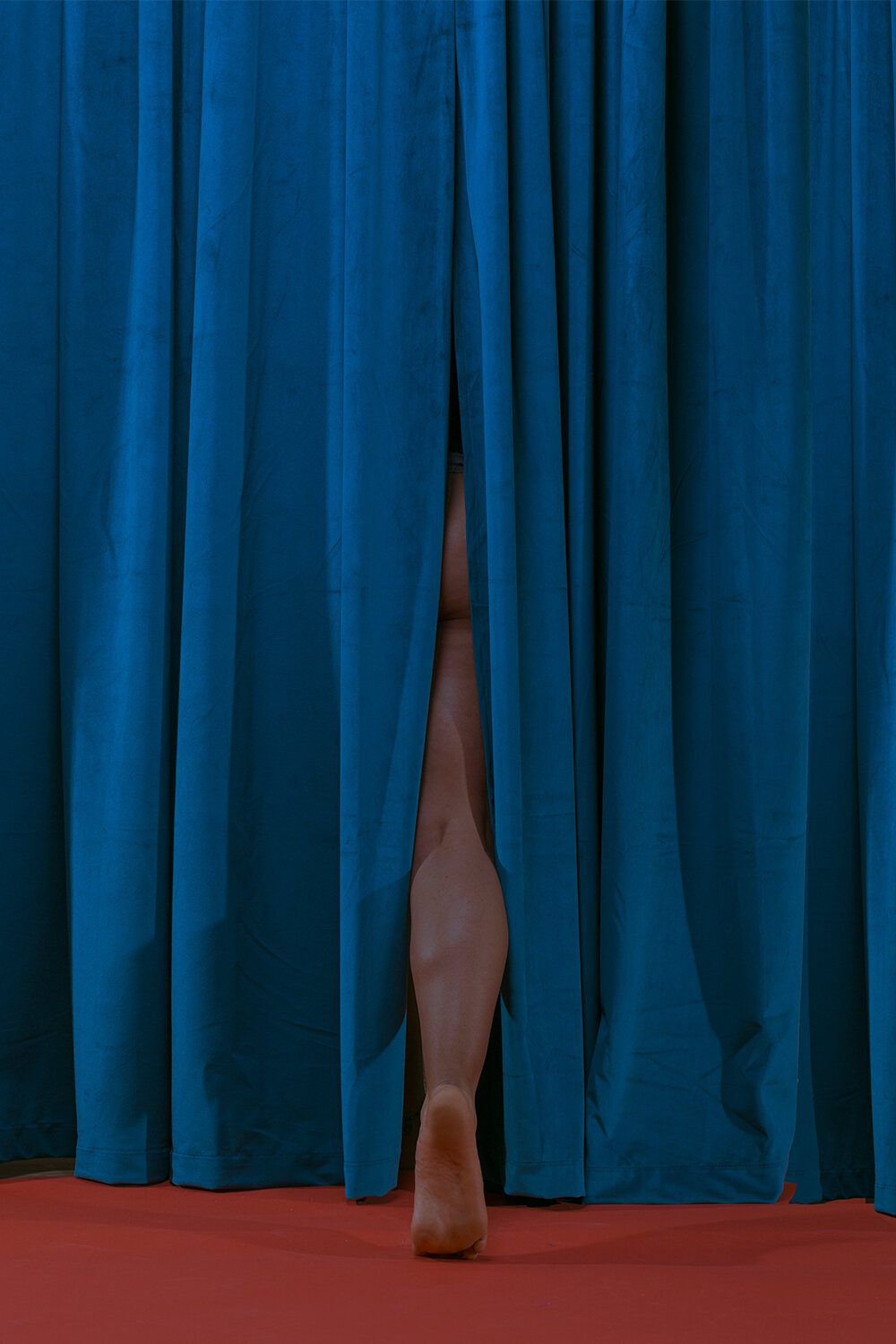 During my interview with Munsya, he states that THE ERASER is a project of personal, critical reflection, a moment to dwell on his past, to look inward. However, the focus of his new work, Monolithic Introspection, has shifted outward. No longer dwelling on his own memories or how he fits into oppressive power structures, Munsya’s Monolithic Introspection addresses the systemic order—how we collectively build and maintain troubling structures and who pays the price. Working closely with a 3D Artist, Munsya’s forthcoming series will feature shiny 3D objects embedded within his photography, focusing on environmental racism and environmental justice. Many of Munsya’s stylistic staples will remain, like his captivating colour palettes and editorial sensibilities, but his subject has changed, shifting from internal to exterior, from personal to collective. 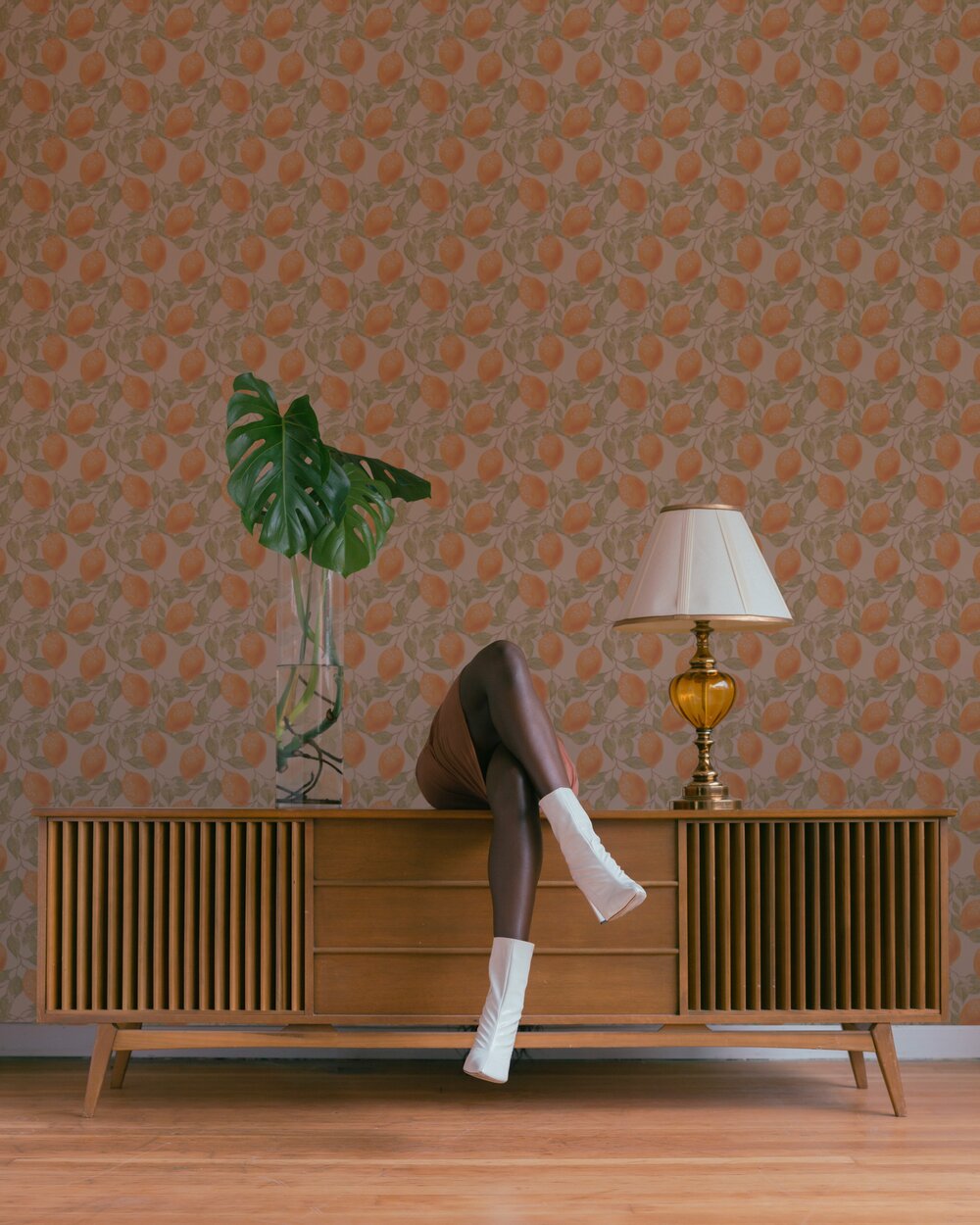 Much like Timothy Morton’s idea of the “hyperobject,” an entity that so massively permeates time and space that it has a distinct physical effect even without a physical presence—think class, race, or climate change—Munsya hopes to dream up imagery that gives physical form to the political and social structures we create. He invites us to think and understand through our physical senses. With a synesthetic sensibility, he tries to make the intangible touchable.