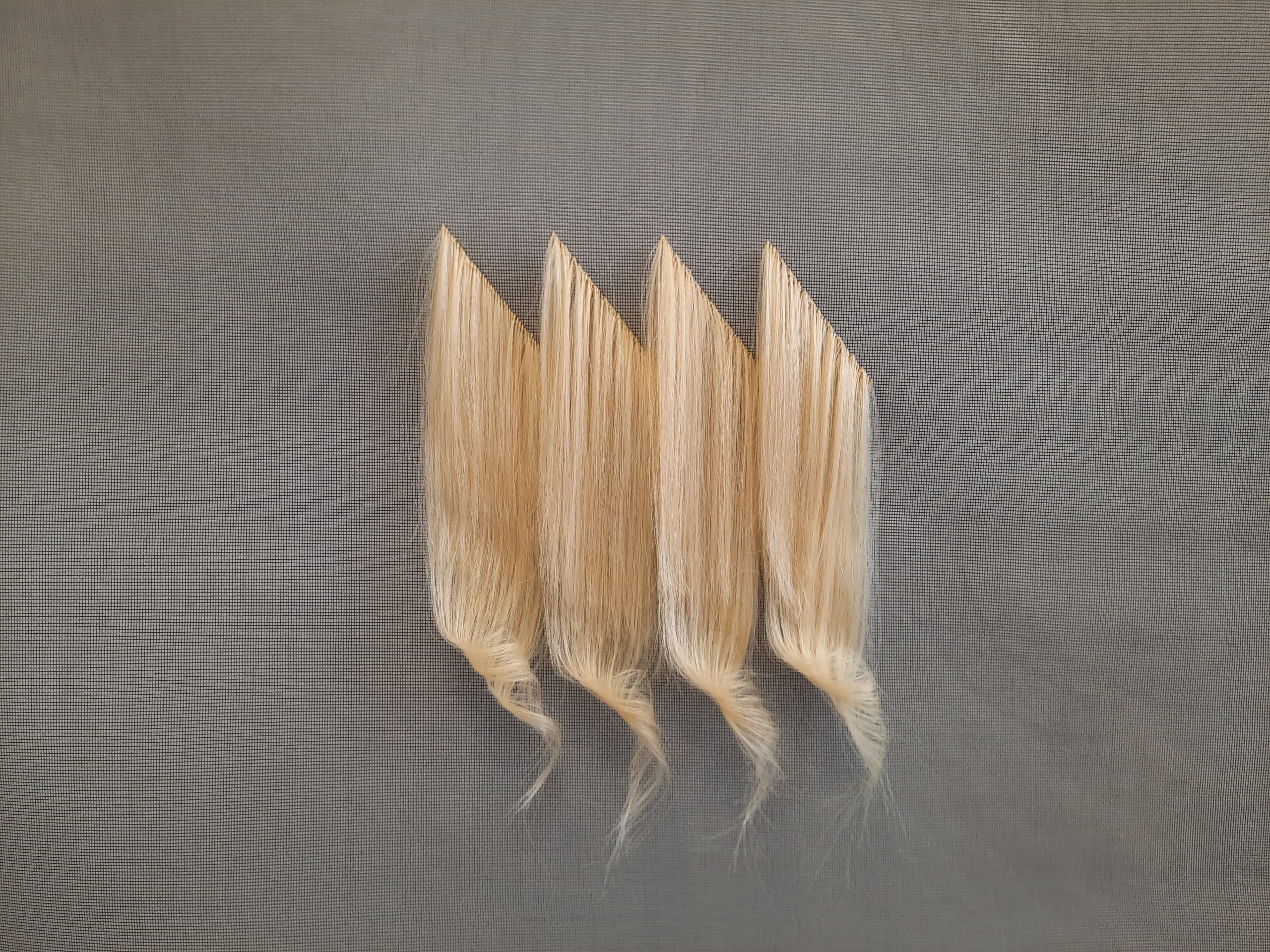 When it comes to identity, there are many factors that affect how we view ourselves and how others interpret us. This is a central assertion in Karin Jones’ practice. Her recent sculptural works arrange hair gathered from various sources—including donations from friends, family, and salons—sparking ongoing conversations around identity, race, perception, and social norms. I met with Jones in her BAF studio to discuss the trajectory of the work she has been creating throughout her residency. Her space felt personal and cozy, with an area rug, comfortable seating, and a desk positioned towards a window facing the street. Around the room were large sheets of screening mesh, mounted to the walls, each one supporting compositions made from long strands of platinum blonde hair. 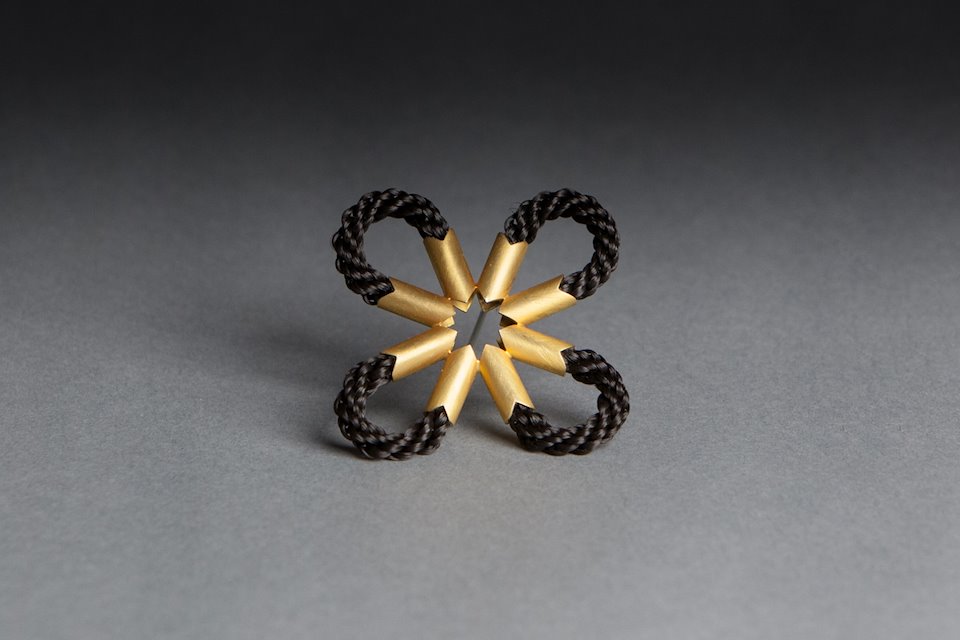 Jones is a graduate of the Jewellery Art and Design program at VCC, and holds a Master of Fine Arts in Craft from NSCAD. Her studio practice draws inspiration from her own extensive background in jewellery making and design, as well as traditional jewellery techniques and ideals. Recent works have been influenced by methods related to Victorian hair jewellery—a Victorian-era trend of making jewellery, such as fine metal pendants, brooches, and other adornments, that featured human hair, often as a way of mourning or commemorating the dead. The hair would be woven into incredibly intricate rope-like adornments, making their original source unrecognizable to the eye. 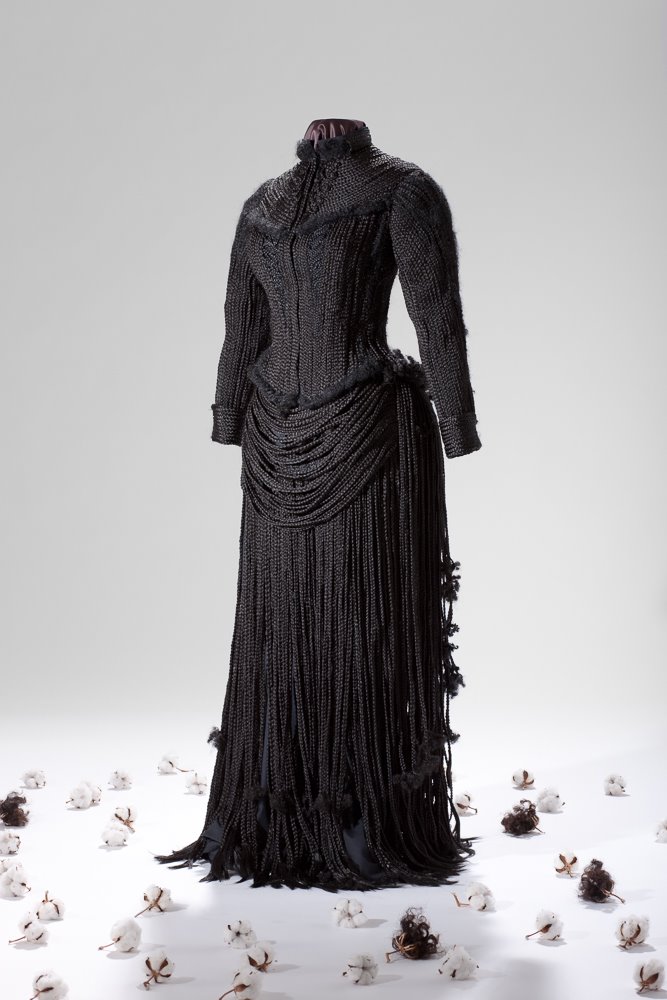 Jones tells me that, after much research and rigorous material experimentation with this traditional process, she wished the jewellery did more to explicitly address race and identity. Hoping to face these topics more directly by reinstilling a human element, Jones’ use of hair in her practice has increased in scope and scale, growing to adorn wall sculptures that reference slavery, for example, and comprising garments that reference colonial attire. In 2014, she was commissioned by the Royal Ontario Museum to create an installation consisting of a floor length gown made entirely of braided hair extensions, addressing the presence and absence of Africans in Canada’s historical narrative. 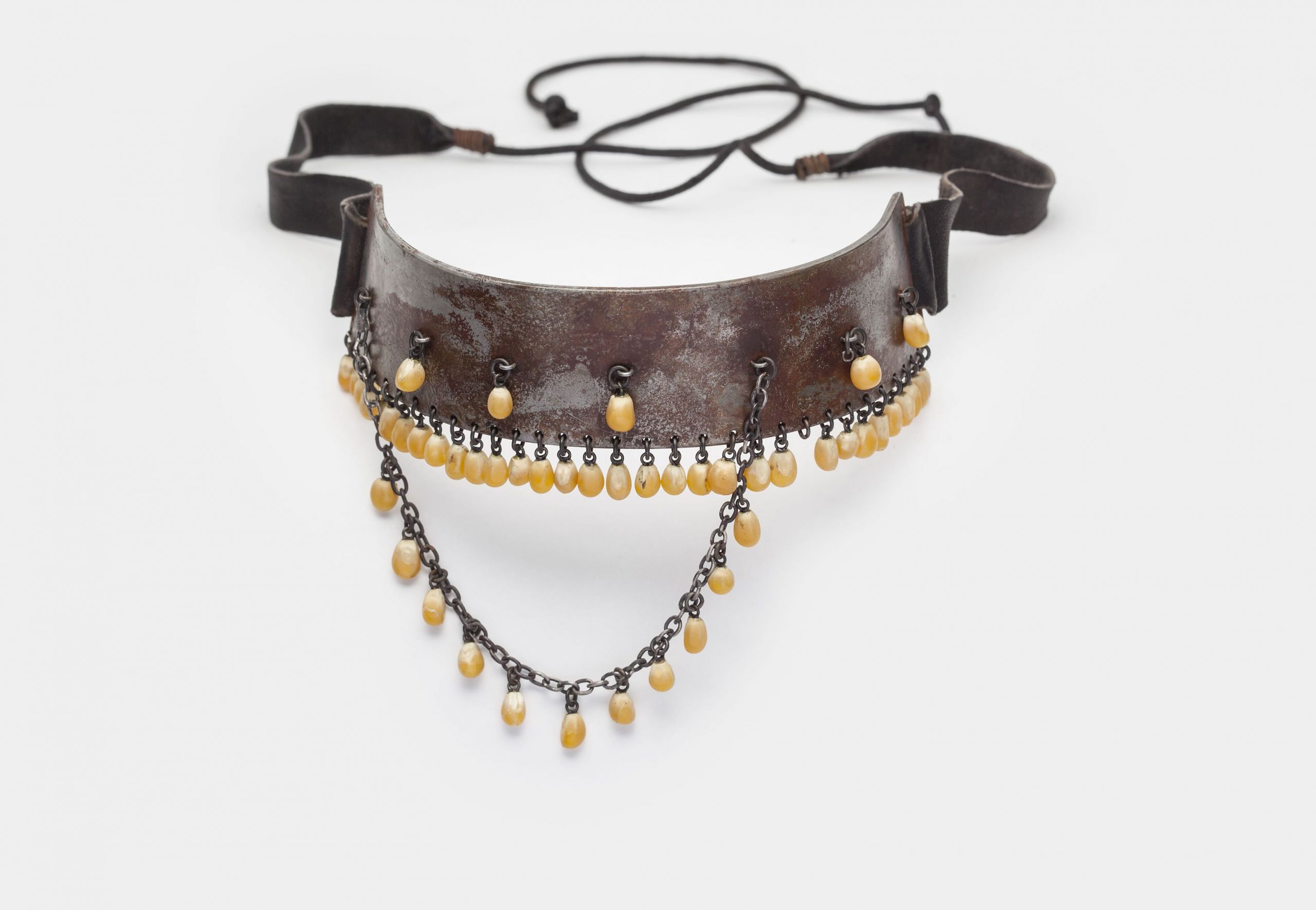 Jones’ interest in hair considers the vast and complex global hair trade. Through her research, she became focused on the fact that a substantial number of Black women throughout North America purchase hair extensions and wigs to cover their natural hair, choosing the appearance of straight hair over a naturally curly texture. Jones also learned that the majority of hair extensions available on the market are processed in India or other places in Asia and shipped to North America and Europe. By showcasing this hair in her work, Jones provides an opportunity to contemplate the often damaging effects of the standardized beauty trends of Western or Eurocentric influence. To push these tensions further, she explores blonde hair—hair that has been further altered from its natural state: bleached, processed, and packaged for sale. The works that Jones is making in residence employ traditional wig-making techniques that involve hooking the hair into pieces of mesh, resulting in intricately arranged hair compositions that suspend from their secured positions. The blonde strands are recognizable as processed hair yet are removed from their commercial context, forcing the viewer to confront their materiality.