Karen Zalamea’s works both epitomize and transcend their medium. Through compositions that focus on the interaction of light and surface, the newest participant in our Vancouver artist residency program explores the fundamental nature of matter in space, essentializing materials to the way they fold, drape, crumple and reflect.

Her photographs diverge from the notion of the medium as record; a function that is ever more omnipresent in our age of constant digital documentation. In fact, it is not immediately obvious that many of the works are photographs at all. They seem to document a conceptual state of being, erasing the imperfect nature of the tactile materials that went into their creation.

In Light & Variation, a series that was showcased in a 2016 exhibition at Franc Gallery, complex formal arrangements were constructed in the studio and photographed with analogue cameras, compressing their dimensionality onto a flat plane. The resulting images obscure the materials and processes that created them; angular and linear, they are ethereal and otherworldly while also calling up familiar optical tricks of light. Light, of course, is the essential medium of photography, and these works succeed in using light to explore itself, erasing the physicality of the matter being examined and leaving pure, intangible forms. Pierre/Paysage, a 2012 series, in some ways acted as a precursor to this process: Zalamea cut, arranged and lit clear pieces of acetate, resulting in crystalline, disorienting images that speak to the inherent difficulties of representing three-dimensional space. The arranged materials are present in the finished work, but one struggles to comprehend them, attempting to discern depth and spatial orientation. 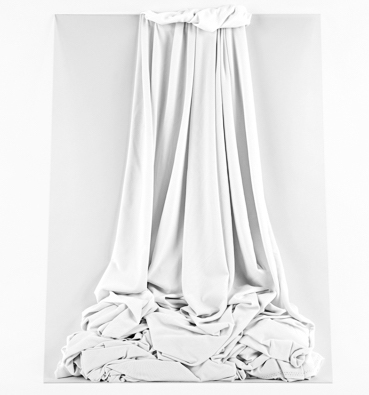 Unlike Light & Variation, in Vitrine, a public art project conceived for the 2017 Capture Photography Festival, Zalamea engaged directly with palpable materiality, using draped and folded cloth to spark questions about the nature of consumer display. Created specifically for storefronts along South Granville, the photographs take as their point of focus cloth that typically, framed by a window, would act as a backdrop for commercial goods. Normally intended to function as visual white noise, in Vitrine curtain-like draperies are the focus of the high-contrast black and white photographs. Demonstrating softness and sensuality where Light & Variation was optics and illusion, the photographs’ monochrome palette calls up the hyper-realistic draped and folded robes found in Renaissance sculpture.

With the new body of work to be produced in BAF’s Vancouver artist residency program, Zalamea will continue to push the materiality of photography as she engages with the heavy history of landscape photography. Starting with analogue and digital photographs taken over the past year and a half, she will experiment with what happens to photography outside of the traditional exhibition format – removing her works from the wall and treating them as objects in space in a show that blends photography, sculpture, and installation.

See the results of Karen Zalamea’s time in Burrard Arts’ Vancouver artist residency program in her BAF Gallery solo show, running from March 22nd to May 12th, 2018. Learn more about her practice at karenzalamea.com. 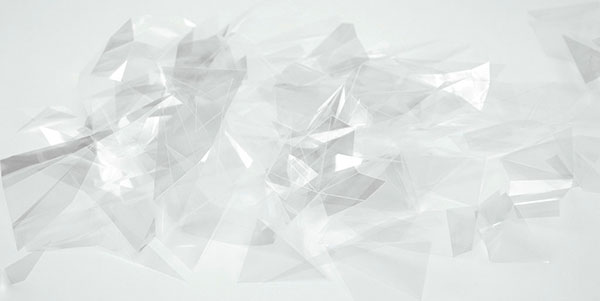