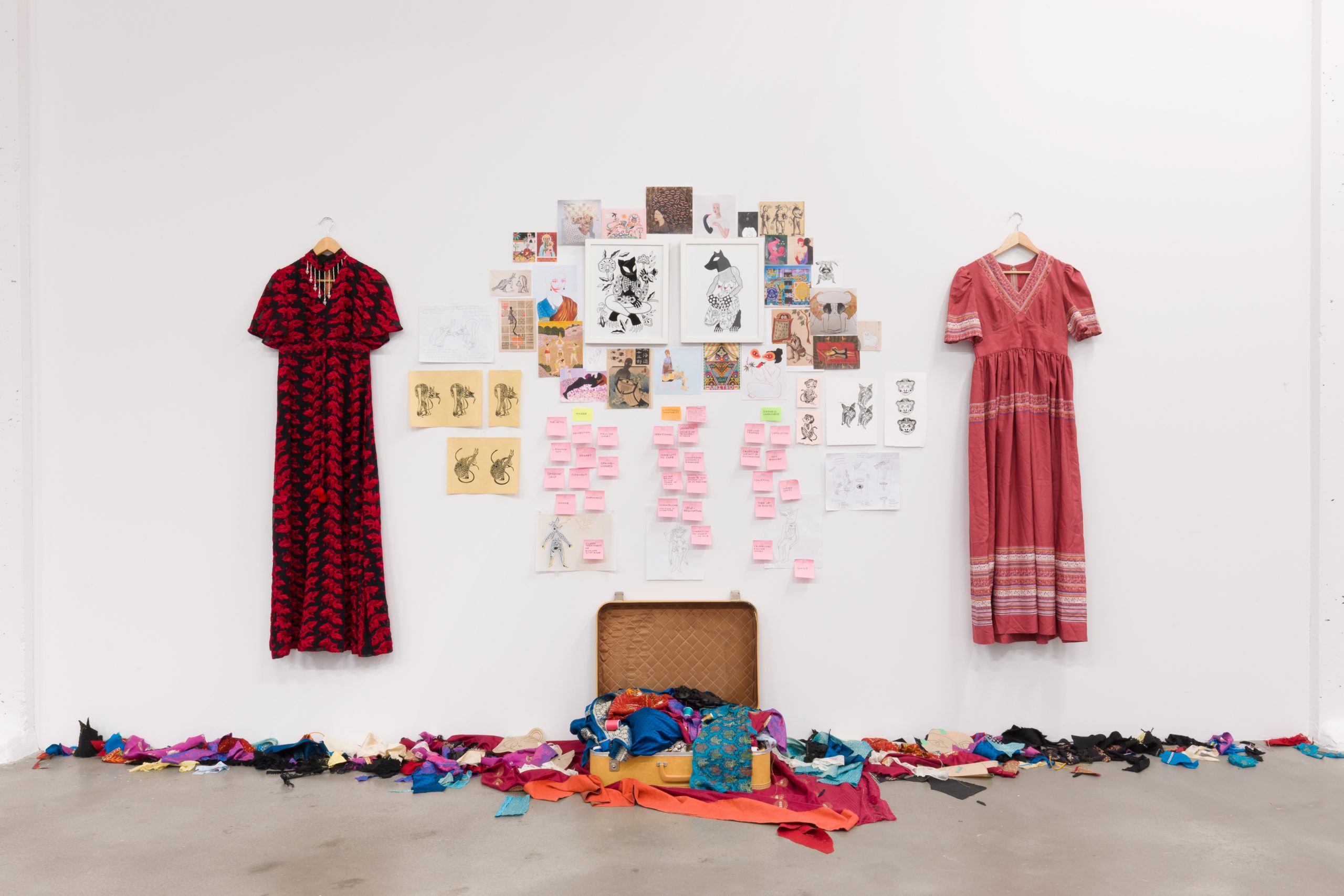 With ‘Beast of Burden,’ Sandeep Johal brings the little-discussed dark side of motherhood front and centre. She also ventured into a new medium by working with textiles, many of which originally belonged to her own mother. In the process, she adapted her practice, which was previously focused on large-scale mural paintings, into a show suited to a more intimate gallery context.

In this interview, we asked Johal a few questions about the exhibition, the challenges of creating it, and her plans for the future. 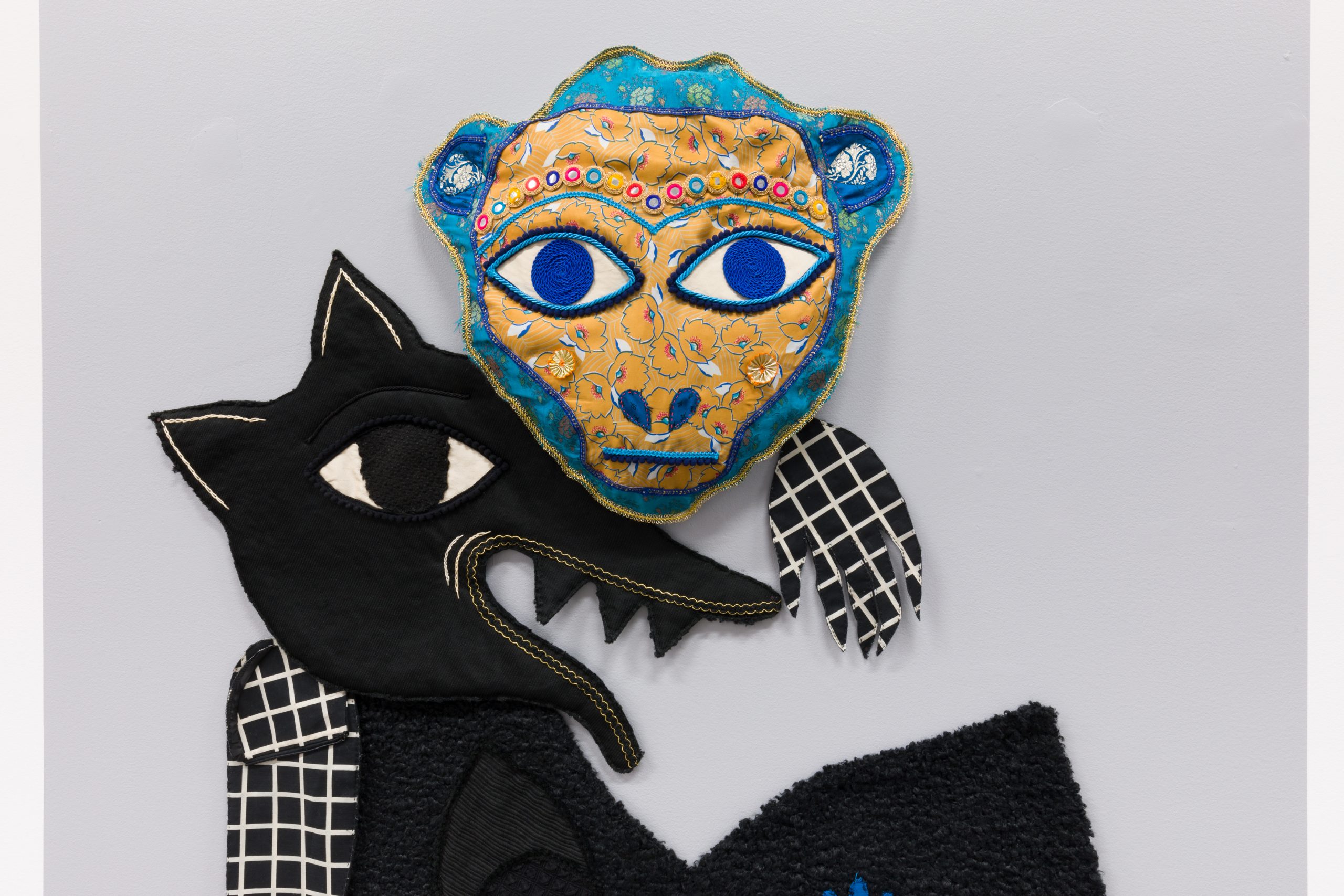 What was your experience like in the BAF residency?

It was amazing — and considering the subject matter of my show, very cathartic!

Going from late nights at my kitchen table to a dedicated workspace like BAF’s – that I would be hard pressed to find/afford in Vancouver – was a real luxury. I treated the residency like a job, keeping the same hours as my son’s school day as well as working additional evenings and weekends.

Instead of hanging around home all day in my pajamas, the residency added a more structured sense of purpose to my day and forced me get dressed and get going (which during a pandemic can be hard to do). Normally I juggle several different projects at a time so having ten weeks dedicated to a sole project was glorious. I had time to think, process, explore, and experiment. And I had space to make a giant mess – by the end of the residency, the entire studio floor was littered with fabric remnants.

The structure and discipline from the residency has since carried over into my everyday life. I’ve replaced my morning walk to the studio with a home workout, and now I treat each day as work day. I’m more focused and less distracted.

In the past, much of your work has focused on other womens’ experience, rather than your own story. But with this show, you tackled your journey as a mother, a very personal, complex and challenging subject. Why was this the right time for you to address motherhood in your practice, and turn the focus onto yourself?

This is such a great question! I firmly believe that timing is everything, and it was time. My residency began after my son started Kindergarten and I suddenly found myself with uninterrupted time and space to think. I also have some distance from those insanely intense feelings of early motherhood and can speak more openly and objectively about my experience now.

I love my son more than anything, but I really struggled when I became a mother. All of these contradictory feelings began to emerge. It was so confusing. I felt ashamed. And when I brought those darker feelings up with others, they were often minimized with well meaning – yet empty – platitudes like “You’re doin’ great!” “You got this!” and my least favorite of all “This too shall pass”. It left me feeling more isolated, alone, and incompetent.

Continual introspection throughout the residency helped me clarify my feelings, the triggers that cause them, and my own relationship with my mother. My hope is that my show starts honest conversations with ourselves and others – less judgment, more compassion. 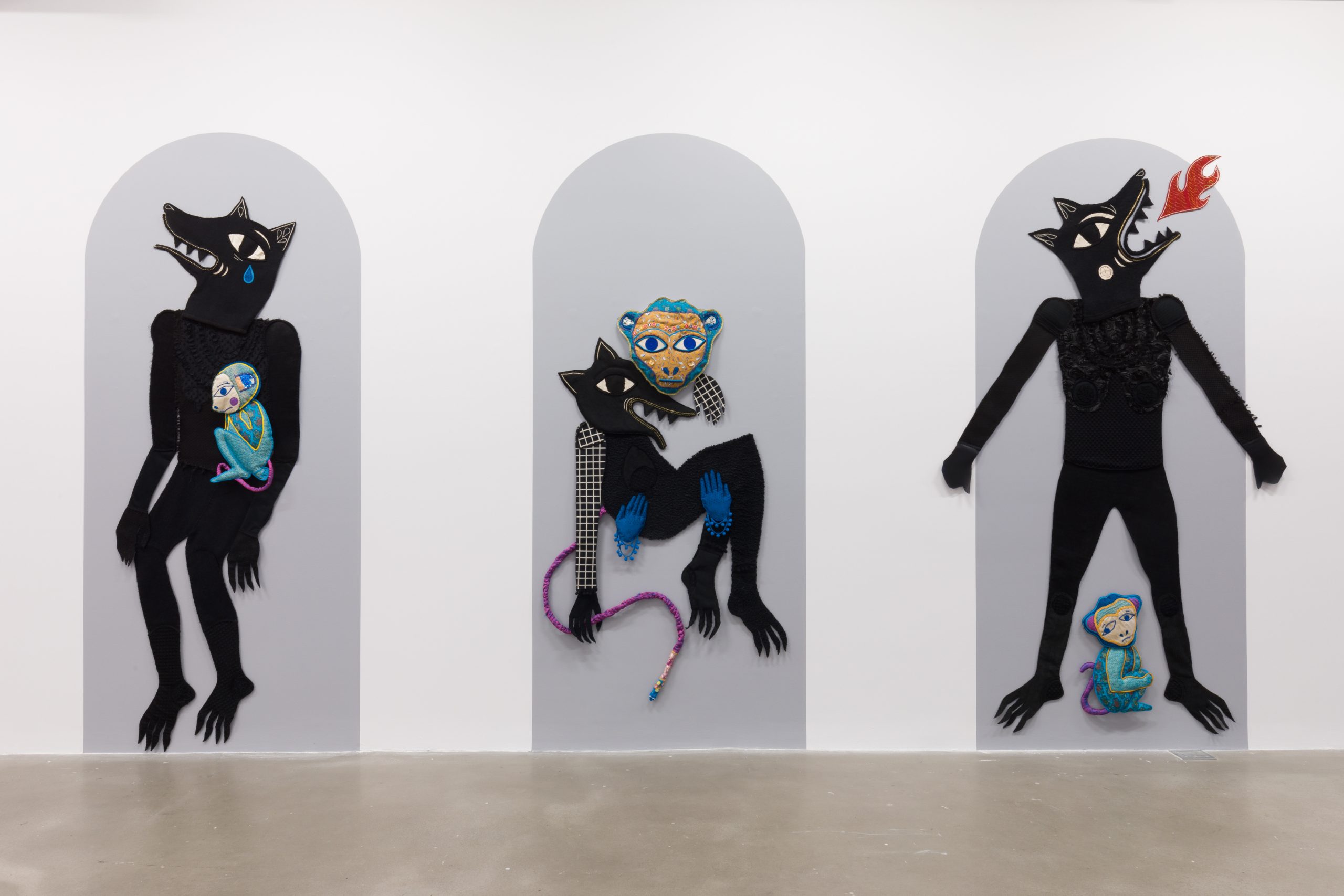 It can be extraordinarily difficult to invoke visceral responses with subtlety and openness, especially when working with such sensitive subject matter! However, your exhibition didn’t shy away from these challenging, or even taboo, conversations. How did you navigate the psychological and visual tendency we all have to wrap up a very personal exhibition (which imbricates a very fraught societal topic) into an overly tidy resolution?

If you know my art practice, you know that I’m no stranger to taboo. I’m all about the aesthetically pleasing gut punches. I don’t know that I really set out to resolve anything since motherhood can never be wrapped up in a nice, tidy bow. I’m sure I’ll rework things, add more pieces as time passes, and let it grow with me as I enter different stages of motherhood. I’m taking a more process-driven, open-ended approach with this particular show. 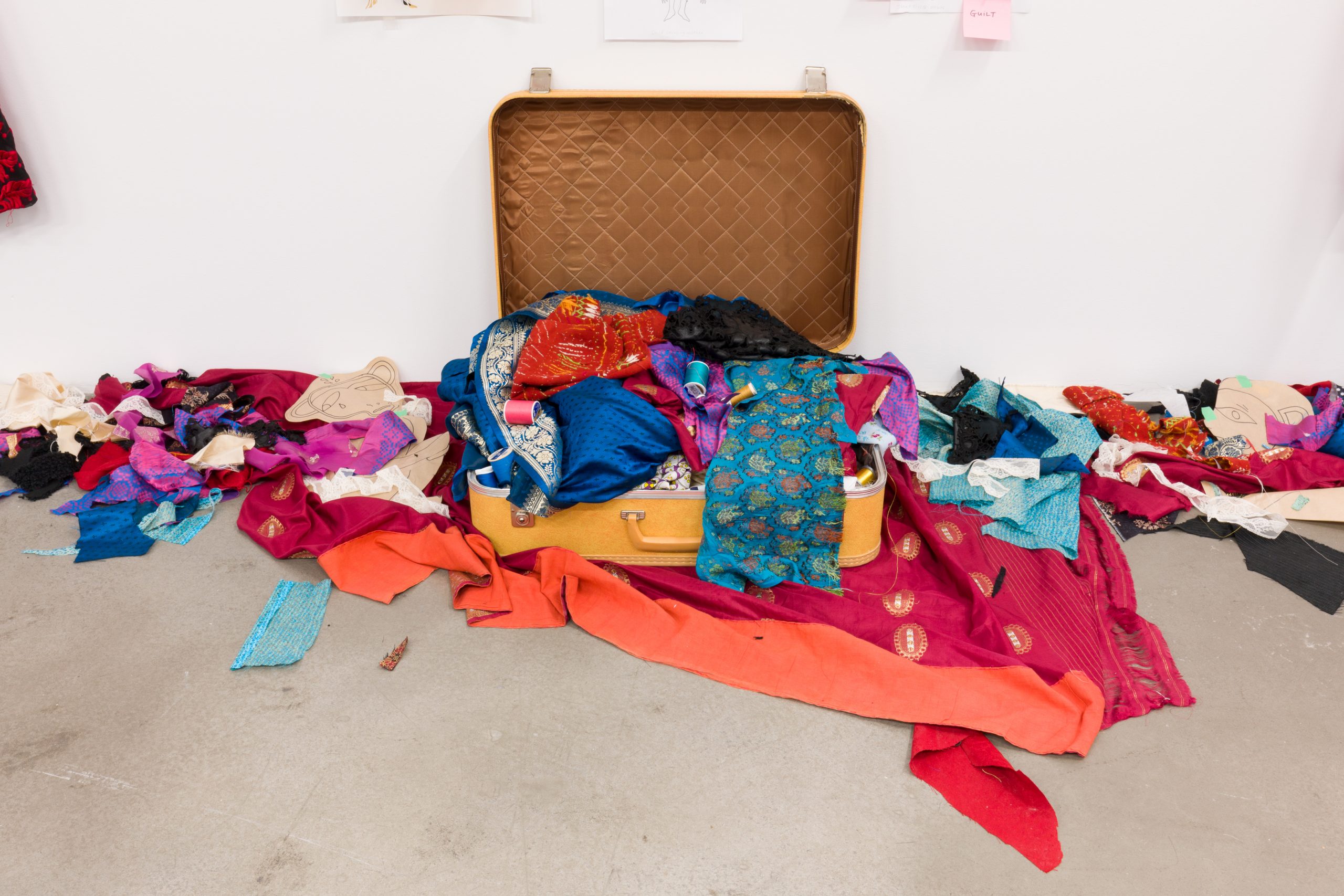 How did the imagery of the Beast and the Monkey come into being? Until now, your practice has often been more controlled and geometric. What was it like to work with those visual motifs in fabric?

It was a huge, but exciting, learning curve. I used this residency as an opportunity to evolve my art practice, to talk about something new in a new to me medium. I loved working with fabric (mostly my mother’s). Even though hand-stitching everything took forever and probably wasn’t the most effective way to go, there was something about the labour of it that mimicked motherhood so perfectly.

As for the imagery I felt a strong pull towards anthropomorphic characters, rather than literal representations of my son and I. To me, my son has always embodied monkey energy – he even came home from the hospital in a monkey onesie – so it was only natural a monkey would characterize him. For myself, I thought a lot about the trope of the angry mother, the mama beast, and felt I would best be embodied by a dark wolf-like character.

I started out with sketches, which morphed into experimental linocuts, and eventually landed on textiles. I’m not much of a planner, but since this was my first time working with textiles and I was under the pressure of a time constraint, I spent quite a bit of time planning the figures. I drew the beasts directly onto the studio wall to get an idea of size and proportion, cut the figures out in black cardstock, and then pinned them to the wall, re-cutting and reshaping until they were just right. I drew the monkeys on craft paper and paired them with the beast figures to see how they would interact, both visually and viscerally. Translating them to textiles was an ongoing process of trial and error and creative problem-solving, but I was up for the challenge.

I wanted to create a strong juxtaposition between the two characters – the beast mother as this imposing, black, shadowy figure, flat on the wall interacting with the small monkey child, shining bright in blues and yellows, and slightly stuffed as a nod to children’s plushies. I’m very cognizant of the fact that my son will come to understand this work later on so it was important to represent him in a respectful way, as light in a dark topic.

Your 5-year-old son was a frequent visitor during your residency and has spent quite a bit of time alongside you as you work. What was it like having him in your workspace? Do you see him as a contributor or collaborator? What does he think about the show?

Well, he said it was awesome — so I guess I believe him?!

I didn’t begin my art career until I had my son so the two will always be inextricably linked. From the beginning, I brought him everywhere with me. He’s gotten used to being fully immersed in my art life that he doesn’t even give it a second thought. He definitely comes by art honestly.

My son did hang out in the studio quite a bit, especially near the end, and as long as he had his drawing supplies, copious amounts of snacks, and cartoons to watch, it was all good. I love seeing what his wild imagination produces and how his drawing skills are evolving.

Over the ten weeks, he watched my work progress. His opinion along the way was “That’s creepy”, so mission accomplished, ha ha!

But in all seriousness, I do ask for his input when I’m working on different projects and he can be pretty insightful. I want him to know that I value his opinion. Right now he feels more like a contributor, but in the future I really hope he becomes my collaborator.

What new projects are you excited for in 2021?

I have a lot of really interesting projects lined up for 2021, but I’m most excited about my solo show at Surrey Art Gallery in the fall, which was postponed from last year due to Covid. It’s another personal show. This time I’m revisiting my young adolescent past imagining how my life could’ve been different if I had had access to South Asian women role models. It’ll be more installation-based and I’ll continue with my exploration of textiles as well as try some new mediums, like paper mache.