Interactivity, physical touch, and the confluence of virtuality and meatspace are central themes of Michael Edward Miller’s practice: ones he hoped to explore in his residency at Burrard Arts Foundation.

But then, COVID-19 radically reshaped the way we experience the world, and Miller had to revisit his planned exhibition, too.

In this interview, we talk to Miller about his materials, reacting to a changed reality, and existing in virtual space.

How did the idea for this exhibition come about?

Initially, I had prepared to develop an interactive time based installation that involved viewers intimately engaging successively with objects and each other. However, when COVID-19 decided to crash the party and fundamentally change the way in which we live, work and interact, I had to reimagine what this installation looked like through the lens of these new safety protocols.

Agency is a central theme to my practice and it was important that this remain part of the installation. My intention with my installation based work is to present the ability for the viewers (or, players) to make choices, and realize that their body can affect change in real space. Already in the world of art, especially within the space of the white cube, we are adverse to touching since this is a conditioned behaviour. “Do not touch the art” is an ideology I am always seeking to push against. During COVID-19, touching became even more taboo.

The question I was then working through, is how in the new age of mask wearing, social distancing, and religious hand sanitizing do I still achieve the opportunity for agency, while also addressing the social impact of the global pandemic? The answer came through material exploration when I stumbled across the unique and opposing properties of Black 3.0 and LIT. Through the different ways you can activate the pigment through light, the opportunity for agency and safe social engagement presented itself in the form of shadows.

The materials used in your work have storied lives. Tell us about Black 3.0 and LIT and your decision to use these particular pigments in your piece.

Black 3.0 is the project of U.K based artist Stuart Semple who upon discovery that artist Anish Kapoor purchased exclusive rights to use Vantablack (the first black pigment to absorb 99.965% of light) in all art based applications, decided to start a campaign against this monopoly by developing a competing black paint that would be made available to all artists and consumers interested in using the product. Semple’s research and development within his company Culture Hustle led to a number of iterations of black paint with the latest being Black 3.0, an extremely dark black paint that when applied properly can absorb up to 99% of light.

LIT came about because artists and consumers who were fans of Semple’s black paint were requesting a pigment with opposing properties to the black void created using Black 3.0. Rather than initially developing the whitest white in response (which did come later), Semple created a pigment that emitted the most light than any other glow pigment. LIT is composed of a variety of light emitting pigments and rare earth activators that when charged, can actually glow in ambient light.

I first came across these products when I was researching holographic vinyls, metal foils and printed holograms for incorporating into paintings, referencing the garish and kitsch imagery and materials found on POGs (a game consisting of collectable milk caps that became a massive phenomena when I was a kid. They were sort of our generation’s version of marbles). I became fascinated with the ability of Black 3.0 to create a void in space, and even further interested in the opposing property of LIT when I saw a short video of someone holding their hand in front of a small piece of paper covered in LIT with a spotlight on, and when the light was turned off the shadow of the hand remained. It presented like an active/dynamic cyanotype, static only for the time it remained and once reactivated with light, the impression faded only to be replaced with another form.

My immediate response was to consider a large scale version by creating a stage of LIT, framed by the void of Black 3.0, and activated with light. Painted directly onto the gallery wall, the installation would allow viewers to enact agency by quite literally affecting the walls of the gallery, and maintain social distancing while safely interacting with others via shadow. After many months of isolation and quarantine, being able to touch, embrace, and hold others close, even in shadow, became a critical element of We were once here.

It speaks to the shape of our current world, one where virtual experience increasingly supersedes our messy corporeality, that in interacting with We were once here, visitors’ three-dimensional bodies become two-dimensional shadows. Part platonic allegory, part early 90s video game, part theatrical stage, your work invites connection as readily as it points to profound disconnection. What are you hoping that visitors take away from your work?

The shadows on the surface are a projection of virtual intimacy in meatspace. The interaction occurs simultaneously in both realms, yet the point of contact where two bodies meet occurs virtually. The stage of We were once here blurs the line between these opposing yet interconnected spaces, just as the work invites connection but points to disconnection as you mention.

I think a similar experience is engaging with another in Virtual Reality. Especially now as we can control our digital limbs with controllers and the popularity of apps such as VR chat. The physical interaction occurs over vast distances but the point of contact occurs in the virtual projection.

Corporeality is incredibly messy. We are extremely exposed and vulnerable in real space. I always felt most comfortable in a digital avatar where I felt most in control of how I performed my identity. I could carefully curate my digital image and navigate spaces I was normally excluded from based on how I spoke, how I looked and the lifestyle I participated in. I could be anyone I wanted to be, which was most often not my honest self, while at the same time discovering who I was within various digital communities that spoke to my hidden identity.

However, as I became older I realized that I can gain a similar sense of control in this real world. Life is like a game. I can make choices, use my voice, body and mind to organize and alter the reality of my environment and path. This discovery and ownership of agency is something I want viewers to take away from my work, not just in We were once here, but in all my future interactive work. Feeling liberated in real space is powerful and has very real positive consequences, something I never had in my youth.

In We were once here, the viewer is able to experience a form of connection that we have been missing during the isolation of the global pandemic, and provides an opportunity to remind ourselves that our bodies and choices affect the spaces we inhabit whether virtually or digitally. I also hope this work reveals the necessity of fun. I always say that fun can be subversive and is often overlooked as an element within art. The element of fun can destabilize our conditioning and help break down barriers that often prevent us from being open to new ways of thinking or trying new experiences.

Ultraviolet light is a form of electromagnetic radiation which has quantifiable chemical and biological effects. There are various material science uses for UV light, one of which is medical sanitization and disinfection. What moved you to work with the medium of light specifically UV light given the current and ongoing COVID-19 pandemic?

It is interesting how elements of a work that become incorporated through solving a material problem end up unintentionally screaming of the very theme the work is addressing. Perhaps subconsciously, the parallels of the global pandemic and the UV light present in We were once here are evident.

Initially I was seeking to find the most effective way to activate the LIT pigment while being able to generate strongly formed shadows of the viewer at varying distances from the surface of the glowing stage. Without the light source being able to do this, the viewers would be unable to maintain social distancing and still successfully engage with the work.

Despite stage lights successfully activating the surface, they were bright, harsh and distracting. Once I began experimenting with UV light, (first with smaller flashlights, then larger floodlights, and eventually a focused 365nm wavelength UV canon) the interactivity of the installation began to resolve. UV light in the wavelength range of 365nm is invisible to the human eye which causes the LIT pigment to appear as if it is mysteriously self activated. There is no distracting purple wash which is generally what we think of when considering UV light. The UV canon used in the final iteration of the installation is coded to turn off and on in intervals of time via an Arduino and relay, allowing for multiple layers of shadowing that in turn fade with each cycle of UV light.

Taking a step back and reflecting on the symbolism of the UV light after watching it successively cleanse the history of our interaction on glowing stage’s surface, I realize it also serves as a symbol for the cleansing and fading away the social norms of our recent past, a direct result of COVID-19 safety protocols.

What are you excited to explore in your artistic practice next, has this residency generated new themes and directions for you?

The residency here at Burrard Arts Foundation and the unpredictability of the global pandemic allowed me to open myself up to sudden change and uncertainty. With times as uncertain as ever as we head into the second wave of Covid-19, future interactive work will have to adapt and be reimagined. My next project I have been developing will examine the intersection between the ancient craft of pottery and interactive tropes found within contemporary video games. How this interaction will look depends on how the pandemic shifts. However, because of this residency I feel more armed than ever to adapt and shift to whichever direction it takes. Everything is in flux, and I am learning to embrace it.

See Michael Edward Miller’s installation, ‘We were once here,’ at Burrard Arts Foundation until Saturday, December 19. 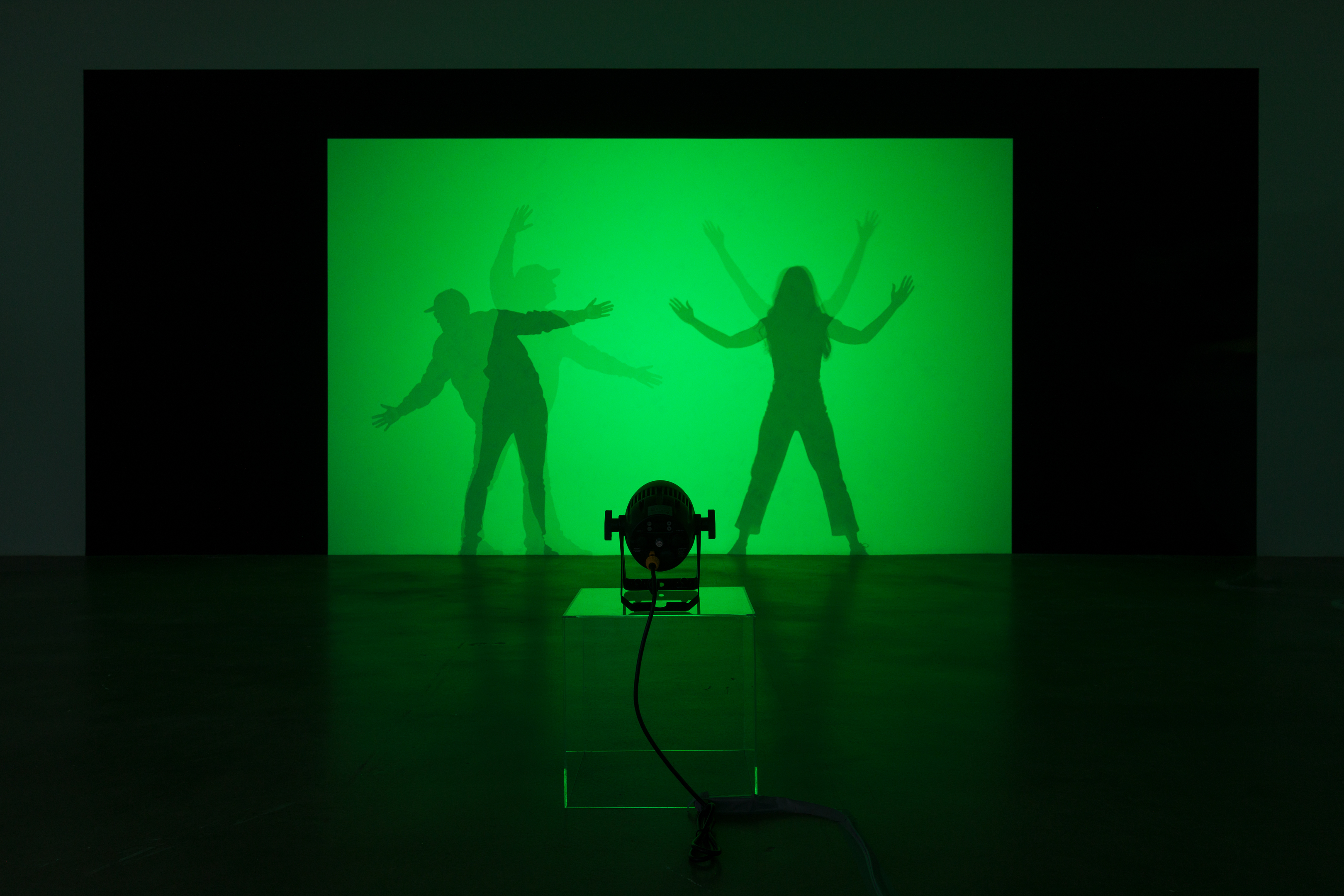