Many of your previous works incorporate an element of chance or serendipity. For example, your installation “Falling: Catching” was a brick wall held together by only twine, sticks, and gravity. What can you tell us about this recurring theme, and to what degree is it present in your current show at BAF Gallery?

The logic of chance and serendipity are integral to almost all my work in that they are integral to the collage process, and I consider myself in essence, a collage artist. In bringing together a collage work, I seize upon accidents, and the resonances or dissonances that may arise between juxtaposing materials, which are themselves, oftentimes, found. The very nature of acquiring such materials is serendipitous. As I joke, the tidal shoreline is my favourite art store.

In collage, the found stuffs are re-contextualized from their previous spatial-temporal reality, set beside other re-contextualized elements, and something new results. Whether it is resonant is as much to do with serendipity as design. For this BAF work, almost everything I am using as source material for the wall’s construction is found or has had a previous application. (The exceptions being the non-reusables like glue, brad nails, propane, and so on.) Before starting I know that as i’ll be working with re-purposed building materials, there will be variation in size, physical condition, usability etc. Such unpredictable realities has a knock on effect. I need to remain flexible, adaptable. Be improvisational. Serendipitous. An additional layer of serendipity arises during the charring process, where different densities or finishes of material respond differently to the flame.

All such unpredictabilities are welcome to me.

I think what attracts me to working with found materials and the collage methods is that I don’t much care to have “my hand” be front and centre of my creative process. i find myself falling in love with a piece of garbage as easily as a drawing from my own hand, for example. To me, the found stuff is equivalent to a created element. The advantage of the found/acquired element is that my ego isn’t in the way.

Found materials seem to be an important component of nearly all your non-digital works – can you speak as to why that is?

What I like about these found elements is that they have been taken or are being taken from an earlier context – they already have a narrative trajectory, albeit broken. I find this notion of a broken or interrupted narrative trajectory is a powerful reflection of the ways of the world, where almost all stories start in the middle and end in another middle. Even in my digital works, I aspire to include found materials. For example in my VR installation “articulated subtext”, I suggest that the alphabet is the found source for the work. And my fundamentally digital films are 3d collages deploying multiple found analog and digital sources.

Sure, one could experience the installation without the AR component, though these were conceived as two aspects of the whole. By this point in my creative life, where i have been creating with computers for over 30 years, I rarely separate the two realms. Like a lot of digital technologies, to me AR becomes more compelling in combination with an augmented physical or analog aspect.

Initially for the BAF residency, I was thinking of labyrinths. Walls are the essential element of labyrinths. I was curious to explore the possibility of “carving up” a physical space using “folding” unusually aligned walls, that are then, extended into an even more disorienting infinite via digital augmentation. Aside from the formal extensions that are introduced via the AR component, which are interdependent with the physical aspect, by deploying these two aspects in the manner that i am, my intention is to challenge the notion of “what is” and “where is” the completed work. The physical work is charred – which both obliterates the exterior surface while simultaneously preserving/sealing it. Before doing so, I am digitally documenting the physical work – “preserving” it as zeroes and ones. These digital elements then become the raw material of the digital extensions. As well, the physical work acts as the registration and orientation target for the digital work. In these ways, the work makes more sense in combination.

Your practice combines very material, craft-oriented actions, such as chopping, burning, and construction, with non-tangible ones in the realm of digital art and technology. Can you compare these two extremes, and are there any parallels between working in these seemingly opposite mediums?

People can misunderstand digital methods as being “craft-less”. At its most basic, there are essential characteristics of craft in programming, especially good programming: finesse/refinement, repetition and variation, attention to detail, singular expression within a larger system, utility, working the material to your ends, etc. This is before one considers how the likes of me, a non-programmer, interact with computers, most often through an advanced GUI (graphical user interface), which hides the command lines in the background. As someone who is visually driven, I am oftentimes inputting and manipulating material via pressure sensitive pen and tablet, which allows analogous control to a pencil/pen/paintbrush. Of late I have been exploring finger and spatial gestures, and voice activation.

Further, 3d modelling and animation techniques, which are essential to all phases of my creative practice, I would argue are more effectively realized – “better crafted” – than is possible with their analogue counterparts.

This show reimagines the concept of a house, and some of your previous works have as well – “The Ruptured Threshold”, installed in Gibsons, used deconstructed domestic elements, while “artist studio/tiny house” is an actual livable space. Obviously, we can connect this to your architectural education, but can you give any more insight into your fascination with the spaces we inhabit?

A house is of a scale and materiality that is essential, relatable, familiar. In working with such scaled and sourced materials, there is already something for most viewers or participants to relate to. Providing an elemental way into my work, without explicit prescription, is important to me as I am more inclined to abstraction and less inclined to realism. Space itself is ephemeral, intangible, defined by its containing surfaces. Albeit with good reasons – like cost, efficiencies, gravity – these defining surfaces being flat and straight and joining at 90 degree angles are never-the- less conventions. In this BAF work, like other works mentioned above, I am “playing with” space. In the placement of the work in the larger gallery space, the form that the work takes and the AR extensions, this work is intended to be spatially provocative.

Another thing about the notion of home is that this is the traditional site of the threshold between public and private space. The house facade – or face – separates interiority from exteriority. A prominent theme of this BAF work is the re-regarding of this liminal skin, which, in 2017, is no longer the explicit privacy threshold it once was.

The acts of construction and deconstruction form another common thread throughout your body of work. While you work with materials traditionally associated with trade and craft, such as lumber, the finished product tends to have a rough, ‘deconstructed’ look, even as the concepts and intentionality of the pieces are well developed and fully realized. Is this dichotomy intentional?

Yes, very much so. This BAF work in particular might be viewed as simultaneously a construction and destruction, as creating any inhabitable space is simultaneously a constructive and destructive process. Good examples are building site preparation and landscaping, the temporary use of concrete formwork, scaffolding, and such. As well, one could extend this to the materials of construction, like the harvesting and milling of wood, the creation of glass, concrete, metal etc. One could extend this simultaneity furtherto things like time – curing vs aging, and weather – drying versus rotting. Another layer of constructive and destructive tides is the way we inhabit specific spaces, which can often change over time. Renovating, birth of children, kids leaving home, making a space an income producer, clearing out, taking in, all change the space.

I think the rough-hewn or deconstructed aspect of much of my work – which i intend to be expressed in my digital as well as analogue works – arises integrally from my methods. Working with found materials, where I am viscerally attracted to the pattern, texture, form of pre-existing things – the interrupted processes and their traces; my embrace of improvisation, play, contradiction and complexity; my choice to charr the surface of the physical work; my embrace of non-sense and non rational logics; as well as relishing “the crack in everything” – all such stances contribute to an acceptance of allowing the work to be “itself” – surprising, incomplete, in process, messy, rough, misshapen.

Also, collage and sculptural works have to account for a context, they are not created in a vacuum. And if they are of a certain scale, this accommodation of a contextual system rubs up against real world limitations, which in turn instructs the form. The work needs to accommodate the reality of carrying the load of itself, which means dealing with gravity, tensile and compressive forces and the joining of and interfacing of materials. If the work is sited outside, one needs to additionally account for aspects like rain, temperature variance, wear and tear, unexpected human interaction. Such forces are simultaneously practical and conceptual.

A key difference between digital and analogue spheres is that many of the rules of these physical realities – such as gravity, weathering, weather – rarely apply in the digital realm. Or if they do, it requires another whole layer of craft and intentionality. As I did in other architecturally scaled works such as “Blow24fps”, and “falling: catching”, for this BAF work I have established an overall structural ordering system, which I am playing within and with. Physically, as well as digitally. Producing an unusual dynamic and friction.

Tell me about the title of the exhibition.

The title riffs on a famous book from the 70’s by JG Ballard called “The Atrocity Exhibition”. There are many interesting things about this book. Highly recommended reading, not just for its seemingly prophetic insights to the digital age. Structurally, its kind of like a kaleidoscope, in that events are repeated from slightly altered points of view. The protagonists name for example, is not quite the same from one chapter to the next, and the same events are referred to in subsequent chapters, again from a shifted perspective. This fragmented kaleidocsopic vision is what inspired the structure of this folded wall construction I have made.

A second thing that is interesting is that over the course of the book, there is an erasure or fracture between what seem to be events playing out in the public realm and events that seem to happen only in a private realm, the protagonists mind. Are the described events memories or echoes of what has already happened? or are these intentions/desires on the part of the protagonist? In this exhibition, the fracturing wall is a shared memory of domestic walls, and also an unfolded/inverted delineating skin between public and private realms.

Also interesting is that the Latin root of Atrocity, refers to fire and seeing. Thus atrocity means “of fiery or threatening appearance”. It also shares a root with atrium, the open main court in a Roman house. I’ve added a playful conditional negation in front of Atrocity, changing it to (n)Atrocity. The exhibition itself isn’t an Atrocity, though indeed the physical construction may be of fiery appearance. Inside the privacy of the home – in our atria – we can become all too oblivious to the real atrocities that arise outside, somewhere else, in the public. Yet, via ubiquitous and portable digital media, such spatial separation is less and less relevant. 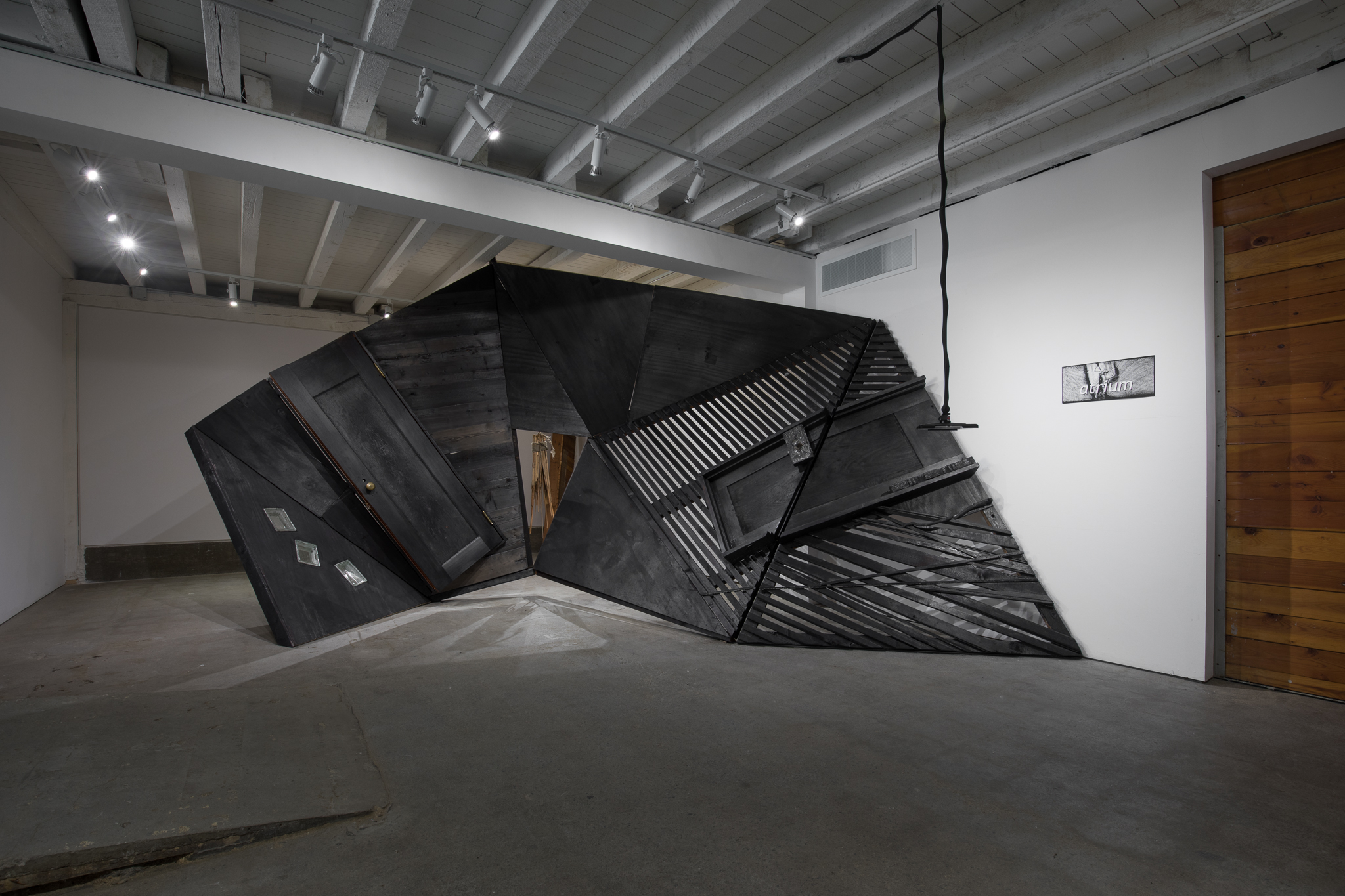