Haley Bassett’s practice draws from many different mediums: drawing, ceramics, social practice, and installation. While she has worked with natural materials before, her public project for BAF’s Garage was the first time she’s done so on such a large scale.

In this interview, we spoke with Bassett about trauma, invasive species, working as an artist of mixed Indigenous and non-Indigenous ancestry, and what’s next for her practice.

A snare is a trap, a drum, and a technique in medical surgery, though it’s connotations extend beyond the specific worlds of hunting, music and medicine. What prompted you to choose ‘Snare’ for the title of this work?

I was interested in the concept of a snare as a trap, or the meaning of the verb ‘to ensnare’. I wanted to create a beautiful trap that entangles its victims by the lure of a mesmerizing false promise that is not obviously sinister until closer inspection. The best-laid traps are enticing, or baited; you walk right into them. Snare is such a trap, as much as it is intricate, deliberate and carefully built—just like an elaborate lie.

Walk us through your material and compositional choices. How did you come to work with Rubus Armeniacus (Himalayan/Armenian blackberry)?

The physical limitations of working in a renovated garage with blackberry made planning the composition difficult. However, I decided on a near-symmetrical composition inspired by Métis beadwork patterns because symmetry is enticing, even calming, aesthetically, which compliments the idea of a beautiful trap.

In 2019, I had started using natural materials to create hidden narratives within my work by borrowing on the cultural significance of plants, my personal associations with them, as well as the language of flowers or floriography. That’s when I first used blackberry for my piece Stop, as an allegory for aggression, invasiveness and trauma, which fit the characteristics of the plant.

Trauma begets trauma, in much the same way that blackberry perpetuates itself. It seeks out footholds in disturbed ecosystems and slowly takes over, much in the way that trauma finds the vulnerable or has the ability to derail your life. We might also consider that every fresh trauma is the culmination of a myriad of generational traumas. Contextualizing things in this way has been helpful for me in overcoming my own personal hardships.

As a person of mixed Indigenous and non-Indigenous ancestry, what does it signify to you to be working with an invasive species while taking up the themes of trauma?

The presence of Himalayan blackberry in North America is due to a long line of colonization, white hubris and happenstance, much like my own existence as a person of mixed heritage. I consider the land on which I reside to be as much a part of me as is the generational trauma that I have inherited. Himalayan blackberry is a perfect summation, and concrete evidence, of the trauma enacted on this land, carrying with it the stain of colonization.

What does the future hold for you? What’s next for your practice?

I am developing an exhibition titled Lineage that will tour Northern BC in 2021. Lineage is a retrospective of sorts, tracing recurrent themes, motifs and concepts that have appeared in my work since early childhood. This exhibition will chart the origin of my fascination with these themes, as well as the development of an artist.

I am also working on a new series titled Matrilineal for the Peace Liard Regional Arts Council’s Artist in Residency Program, which will be showing at Peace Gallery North in August 2021. This body of work will help me honor the recent loss of my grandmother. I will be exploring themes of transition, entropy and transformation using natural materials and aged objects sourced from my grandmother’s homestead.

Thanks to the Early Career Development Grant I received from BCAC, I am fortunate enough to have my mentors Brendan Tang, Peter von Tiesenhausen and Genevieve Robertson to guide me through the intensive but exciting year ahead.

Haley Bassett’s installation ‘Snare’ will be on view in BAF’s street-facing public exhibition window, the Garage, until Saturday, December 19th. 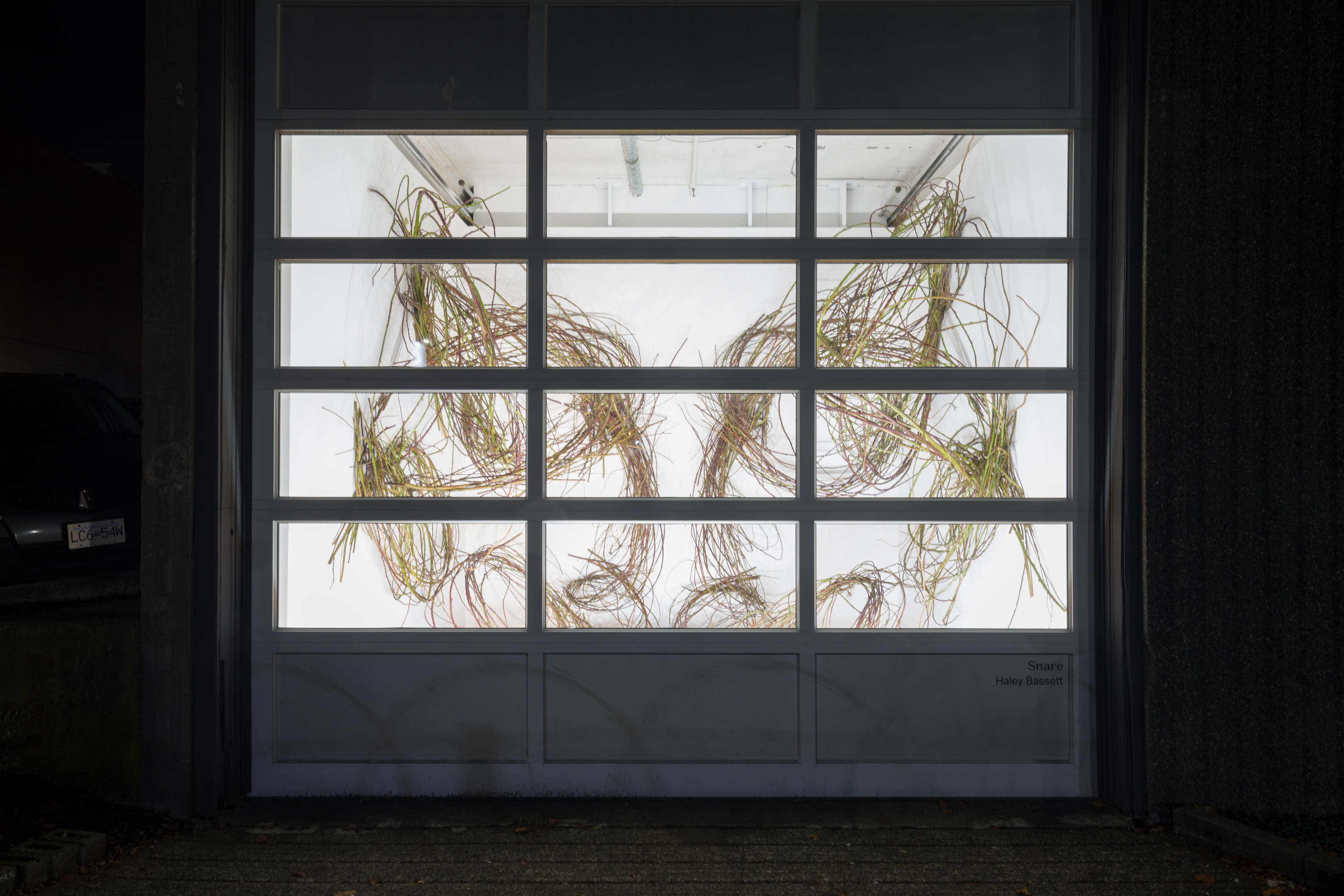