Eric Tkaczyk’s video installation /ˈsent(ə)nəl/ explored issues of alienation, privacy, and surveillance in the Information Age. The project used projection-mapping and privacy film to display flickering eyes on the street-facing windowpanes of the BAF Garage. The installation mimicked the screen-mediated nature of online communication, creating a similar partitioned interaction between audience and projector.

Read on to learn about Tkaczyk’s practice and the motivations behind his engaging installation.

Your work often incorporates references to the body, either through direct representation or through materials close to the body, such as nylon stockings. Can you speak to this? Do you see the body as always present in your work?

The body is always present in my work, either through investigations of embodied or disembodied experiences. Identity is deeply complex, and I find it increasingly difficult to tightly grasp a sense of self in a world that pulls you in so many directions.

In my material practice, my nylon works consider queerness, sentimentality, gender dysphoria, loss and intimacy. In my media works, I investigate identity in digital space and the disembodiment which ensues— disrupting my sense of self. I consider questions of what is a real body, and what isn’t. Where does the line between the physical self and the digital self get drawn?

I also acknowledge that my work becomes deracialized as a white-bodied subject, and am active in my awareness of this privilege.

On one hand, /ˈsent(ə)nəl/ creates a meeting place—a destination in front of which to gather in person. On the other hand, the street outside BAF is quiet at night, and can feel isolated. How much did location influence your conception of /ˈsent(ə)nəl/?

I think that, much like our communication in online spaces, there is a blurred line between being with others and being alone. This seems like an appropriate comparison to the installation and the metaphorical space it occupies.

When I first moved to this city, I was quickly taken aback by a sense of coldness and distance between the people living in it. Often times, strangers on the street will not make eye contact or return a smile. The more I got to know the social landscape, the more I found that people are occupied by their digital personas— and the coldness that comes with that had translated into physical space. There is a sense of status and keeping up appearances that provokes anxiety in me. I began to feel as though people were more concerned with wanting to be seen, rather than wanting to see.

The Garage feels like one of these spaces— in between connected and disconnected, social and isolated. With /ˈsent(ə)nəl/, I tried to highlight this liminality through both concept and execution.

/ˈsent(ə)nəl/ runs all hours, meaning it is quite dim on sunny days. Do you see this constancy as essential to the work?

You have created significant bodies of work in both painting and new media. Are you led by concept or medium? Do you see these two material approaches as interchangeable within your practice?

I think that I am led by concept and medium in tandem with one another. Often times, the things I want to say with my work are better suited to a digital or media-based outcome like projection or video. The concept is more clearly stated when the medium is intangible or ethereal like in /ˈsent(ə)nəl/.

My background, however, is in painting and print media, and there will always be a part of me that needs to express myself through physical materials. Tactile experience is something I will never abandon, and the concepts that I explore in these projects are influenced by the materials that suit them.

A new video work, beyond the scrim (2022), will be screening at Grunt Gallery’s MPCAS between April 15 and October 15, 2022. This video project, like /ˈsent(ə)nəl/, responds to the particular architecture of the building where the public screen is displayed—highlighting the tension between real and unreal spaces. 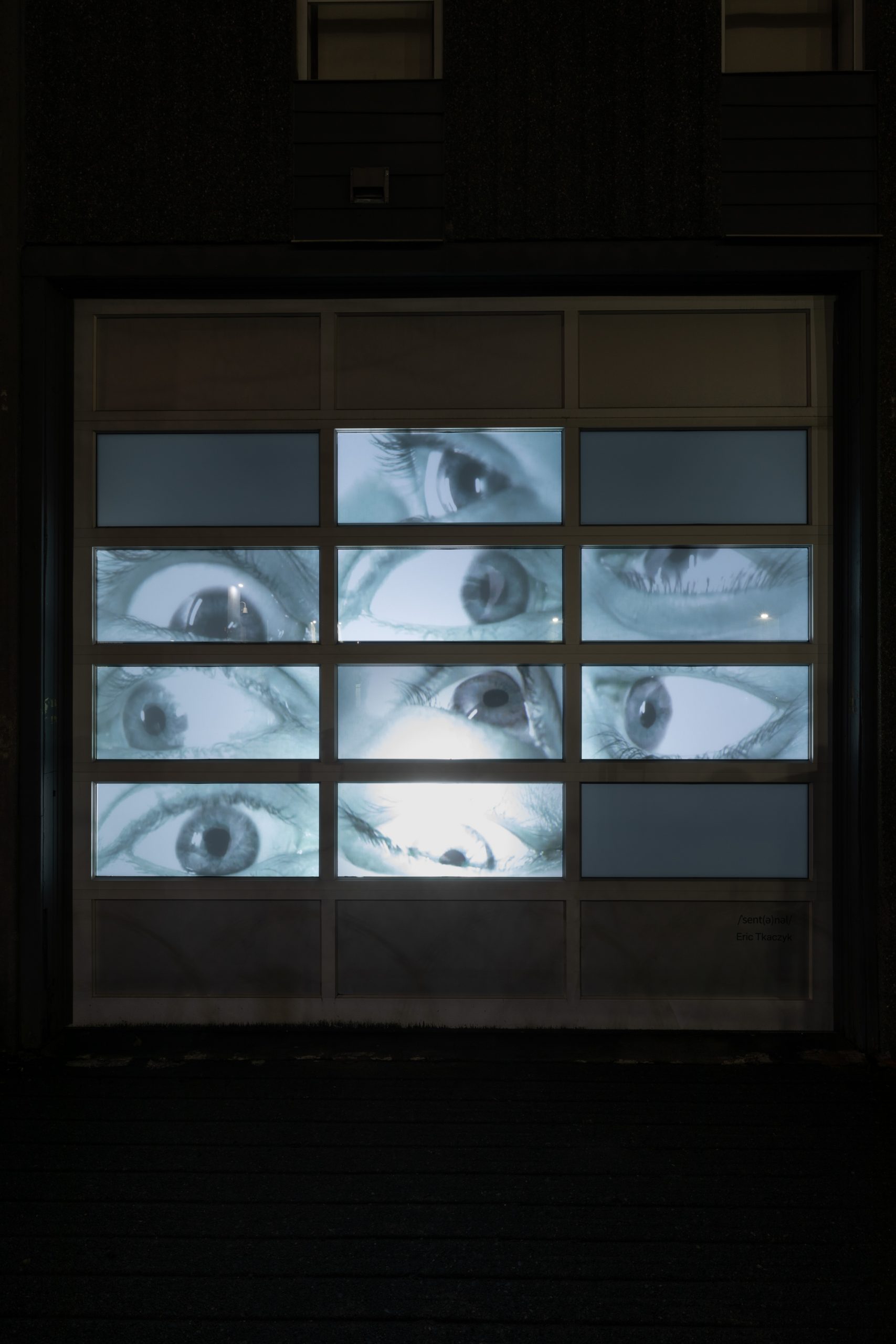