Luke Ramsey brings a simple, almost childlike style to all of his illustration, collaborations, and murals. His works depart from the most basic elements of visual art: line, colour, and shape. Using a bright, likeable palette to depict friendly characters, scenes from nature, or doodle-inspired lines, his works are equally suited to small-scale drawings and large public installations. He has been featured in Booooooom, the New York Times, Vice, and more, and founded the Island Folds residency on Pender Island in 2005. His Façade Festival 2017 project epitomizes and yet simplifies his practice, covering the Vancouver Art Gallery in quickly evolving squiggles that reference the politically loaded gesture of graffiti-writing.

Can you tell us a bit about your artistic practice and background?

I’ve been making art most of my life. I grew up in England and moved to Victoria, BC, when I was nine. When I graduated from high school, I hitchhiked across Canada with a friend, and then travelled around the world with my wife for a few years. I lived in Taiwan in 2002 and was inspired by all the cartoons and characters in daily life there. In 2003 I decide to pursue a career in art. In 2005 I went to the MacDowell Colony in New Hampshire for a residency, and had my first art show at Space 1026 in Philadelphia. Those experiences had a huge impact on me. My wife and I operated the Islands Fold artist residency on Pender Island from 2005 to 2010, and after that I pursued more of my own practice in illustration, painting and public art projects. I like to travel with my art, applying it to many mediums. Collaboration has also been a huge part of my practice.

Describe your project for Façade Fest 2017.

First off, I am not a graffiti artist, writer or tagger. I do however have a relationship to the art form, and did graffiti when I was a teenager. Funnily enough, in my adult life I’ve been commissioned to paint murals on graffiti hot-spots. In a work I did last year, I left out sections of a wall in order to expose graffiti tags and collage them into my landscape. I did this as a gesture to people and place, to not erase or paint-over the history.

I’m currently the City of Victoria’s Artist in Residence, and this is a topic that has come up in meetings with city staff, bylaw officers and police- what’s graffiti and what’s art, where can artists experiment with the form, how do we work with graffiti artists, how do we deter tagging and vandalism? I can’t totally defend taggers – I’ve worked on murals only to discover tags on them the next day and it sucks. It’s a war that can’t be won. I believe in creating opportunities for these artists, encouraging the development of new directions and spaces instead of going around in circles with the same problems. I want to keep an open mind to graffiti artists and taggers, because I used to be one myself, but in the end, I chose to open doors by not tagging on them.

Some graffiti resonates with me, but most tags don’t. I like the energy and defiance of tags, an act of rebellion and mischief. With the exception of hateful graffiti, to me it is a nonviolent act, and yet I see how it can trigger a violent reaction, and ignite discourse. I understand the problems it causes for the public, property owners, law enforcement and municipal governments. I see the reflection it has on neglected neighbourhoods, but graffiti can travel everywhere, from train cars to mansion walls. There’s also a rich history and ethos of graffiti that I won’t go into depth about here. Graffiti is also rooted in territory and a battle of egos, and that’s an aspect of it I don’t enjoy. So this brings me to what inspired my project for Façade Fest 2017.

When I was initially proposed this opportunity, I thought about all the amazing exhibits I’ve seen at the Vancouver Art Gallery. The VAG is an inclusive venue with diverse programming. It offers by-donation nights for everyone to afford. That said, with the exception of its history of exterior installations and projections, inside the walls is a controlled environment, whereas outside it is exposed to the street. There is a prestige to the place and building itself. Like it or not, graffiti and tagging is a reflection of the street, it defies affluence and prestige. So I thought to myself what would it look like to digitally tag the VAG? To be clear, I am not advocating for graffiti artists to tag the VAG, and I am taking liberties with my approach. I am working within a controlled sanctioned project. However, it’s the gestural movement in tag writing that motivates me. I am an avid drawer who likes to exercise the flow of line work. For this project I prepared a loop of hand drawn “tag” gestures to animate across the building. I intentionally did not write specific words or letters, because I’m not a graffiti writer trying to get my name up. I did however include the words love and peace, and made them write backwards. This is a gesture to subliminal messaging, like playing an Ozzy record backwards. My intentions are to promote love and peace, but not overtly like on a meme or corporate billboard trying to sell something.

When I look at a destructive man-made world, it doesn’t seem that an overt message of love and peace gets much promotion, hence the subliminal approach. For every line drawing in the projection, I made 10 or more like it and kept the one that looked right to me, just like a graffiti writer practicing tags in their sketchbook. I love the accessibility of drawing – people know scribbles, they know doodles. I don’t consider myself a doodler, because I’m trying to refine the form, experiment and expand on it, using it in many aspects of my practice. I want to create imagery that evokes energy in simplicity, a line in time that flows across a piece of paper or a huge museum facade.

Have you ever worked in video art or projection mapping before? To what extent was working with this technology a new experience for you?

I worked with Arya Hawker who assisted me with projection mapping on the Legislature building and Empress Hotel this past New Year’s Eve in Victoria. That was my first time on that scale, but I have also projected live drawing with a tablet from my laptop at music gigs and events.

Is your Façade idea an entirely new project or are you further developing existing themes?

The idea is entirely new, but has a similar visual approach to one I explored in another project – an animated video for Emily Carr University’s new logo launch. Arya Hawker worked on that video with me too. Arya is experienced in video and projection mapping, so it was great to collaborate with him.

Your work will be projected over the entire façade of the Vancouver Art Gallery. Have you ever worked in such a large scale before? What has been exciting, and challenging, about the process?

The Legislature building and Empress Hotel were large scale, but the façade of the Vancouver Art Gallery is wider. It has been exciting to take advantage of this size and stretch the movement of the line work. Working with the team at Go2 has been very helpful. I think the challenging part for me is to not over do it with the animation, to let the movement and gesture of the lines speak for them self. It will be amazing to see the transition from small-scale to large. To go from a simple technology like pen to paper, to using more complex modern technology like pencil to tablet, video to projection mapping, is an amazing process to be a part of. It’s also great to collaborate with others who are specialized in their field and medium.

See Luke Ramsey’s projection mapped artwork in Façade Festival 2017 – it will be shown from 7:30PM to Midnight on Wednesday, September 6th, as well as in the encore presentations on September 9th and 10th. 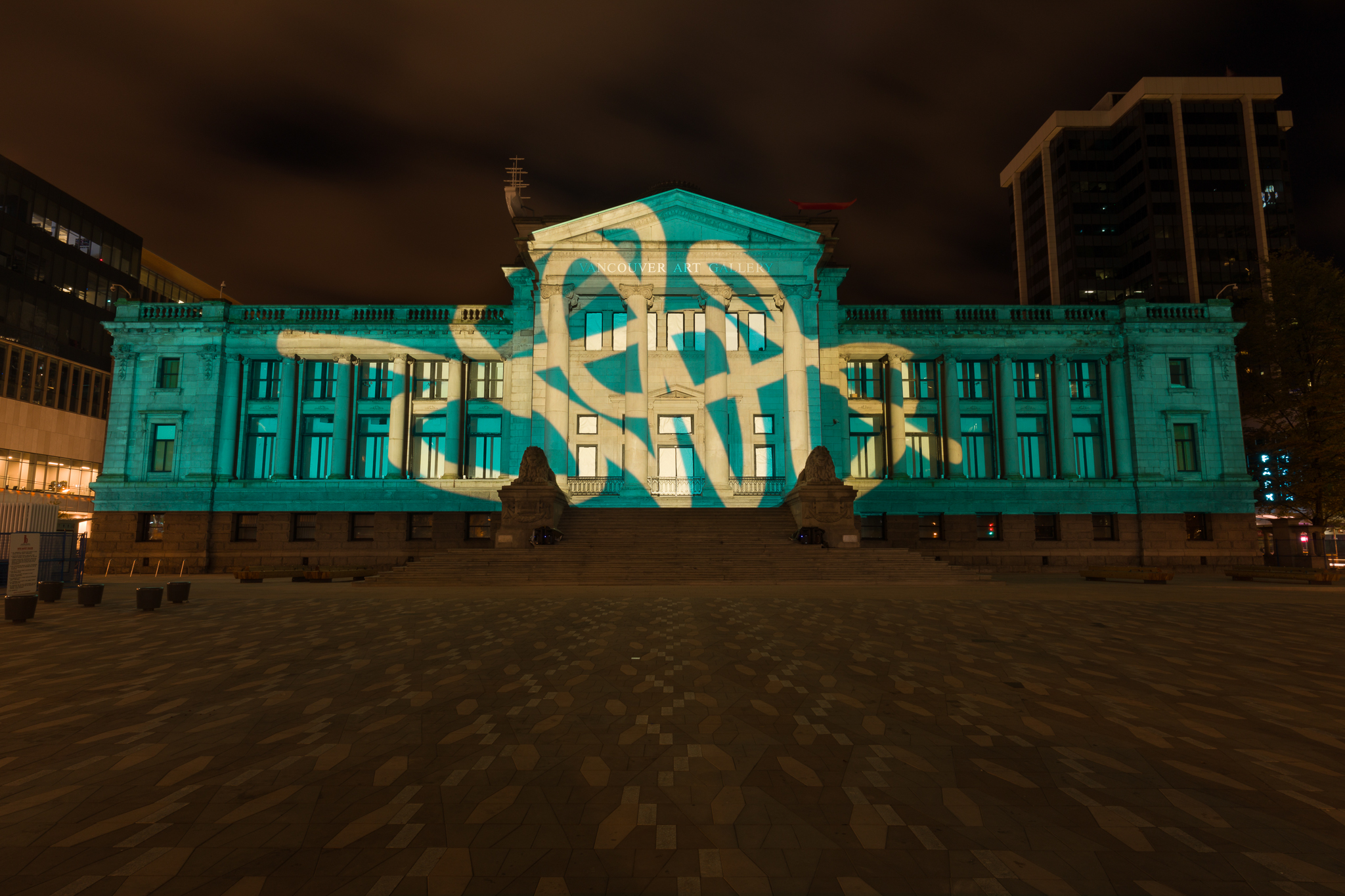