We spoke with artist Barry Doupé about his upcoming project for Façade Festival 2016.

Prior to this project, you’ve worked extensively in video and computer animation. What would you want our readers to know about your existing body of work?

That I’m currently working on a new feature length animation that’s about half way done. I’m also working on a series of digital paintings, and writing scripts for a series of live action monologues. You can watch clips of my previous work at http://www.barrydoupe.ca.

A lot of things. It could be a situation, a memory, language or an image. Right now I’m being inspired by weird compositions.

Describe your project for Façade. How did you come up with the idea and choose what art to project? What kind of effect are you hoping to have on the viewer?

I made a virtual pixel board using 3D animation software 3D studio Max and then designed an algorithm where I can control and animate the colour palette of each pixel. I wanted to do something that complimented the structure of the building and that also had a colourful summer energy.

Were there any challenges? What was the hardest part of the process?

The biggest challenge was coordinating colour combinations that I thought worked well together, making smooth transitions and not having the video be too repetitive.

How does working in projection mapping fit into, and contrast with, the work you’ve done in video and animation before?

It’s a new process for me. I started out by looking at other examples online. There are a lot of showy things, like having the fascade crumble or dragons flying out of windows, that kind of thing. Those examples are a lot of fun but I wanted to do something more simple and formal. I’m currently working on a feature length animation and it requires me to focus a lot on narrative and think about how all the scenes work together. For this piece it was refreshing to take a break from those narrative concerns. The nature of the projection mapping lends itself to more optical explorations of colour and surface and texture.

What have you learned about your art through this process?

That working on a project that has some preset elements can be really creatively exciting. This project is specifically going to be projected onto the front surface of the Vancouver Art Gallery. I often pass by the site and stand and look at the different angles of the surface and think about them.

For Façade we partnered with Go2Productions to bring the festival to life. What was it like working with them to complete your vision?

They provided some technical assistance and made a mock-up that helped me envision how the final piece will look when projected.

What are your thoughts on the coupling of art and technology?

For me, it’s a sense of collaboration that I get from the tools in the technology. There’s a back and forth between the tools and the ideas that they give me and the creative possibilities that I come up with based on their parameters.

How did you come to collaborate with us here at the Burrard Arts Foundation?

My name was put forward by an outside committee, and then they contacted me and asked if I was interested in participating.

Barry’s project will be displayed Wednesday, August 31st from 8pm to 12am on the Robson Street side of the Vancouver Art Gallery. His work will also be shown on September 4th and September 5th for the encore and Grand Finale evenings. Façade Festival 2016runs from August 30th to September 5th featuring the work of Rebecca Chaperon, Barry Doupé, Renée Van Halm, Eric Metcalfe and Chris Shier. Learn more about Façade Festival hereand follow online #facadefest @burrardarts. 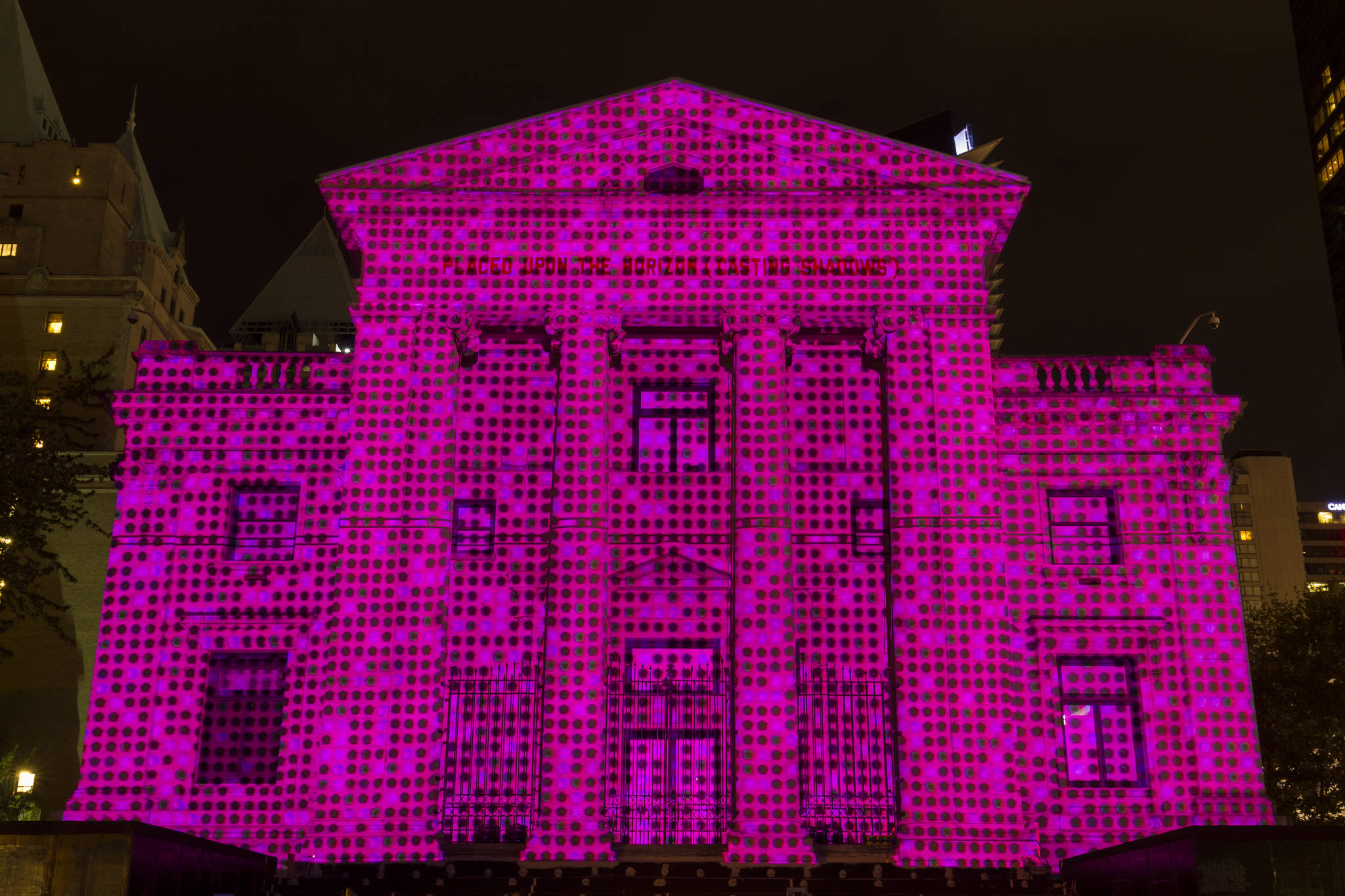