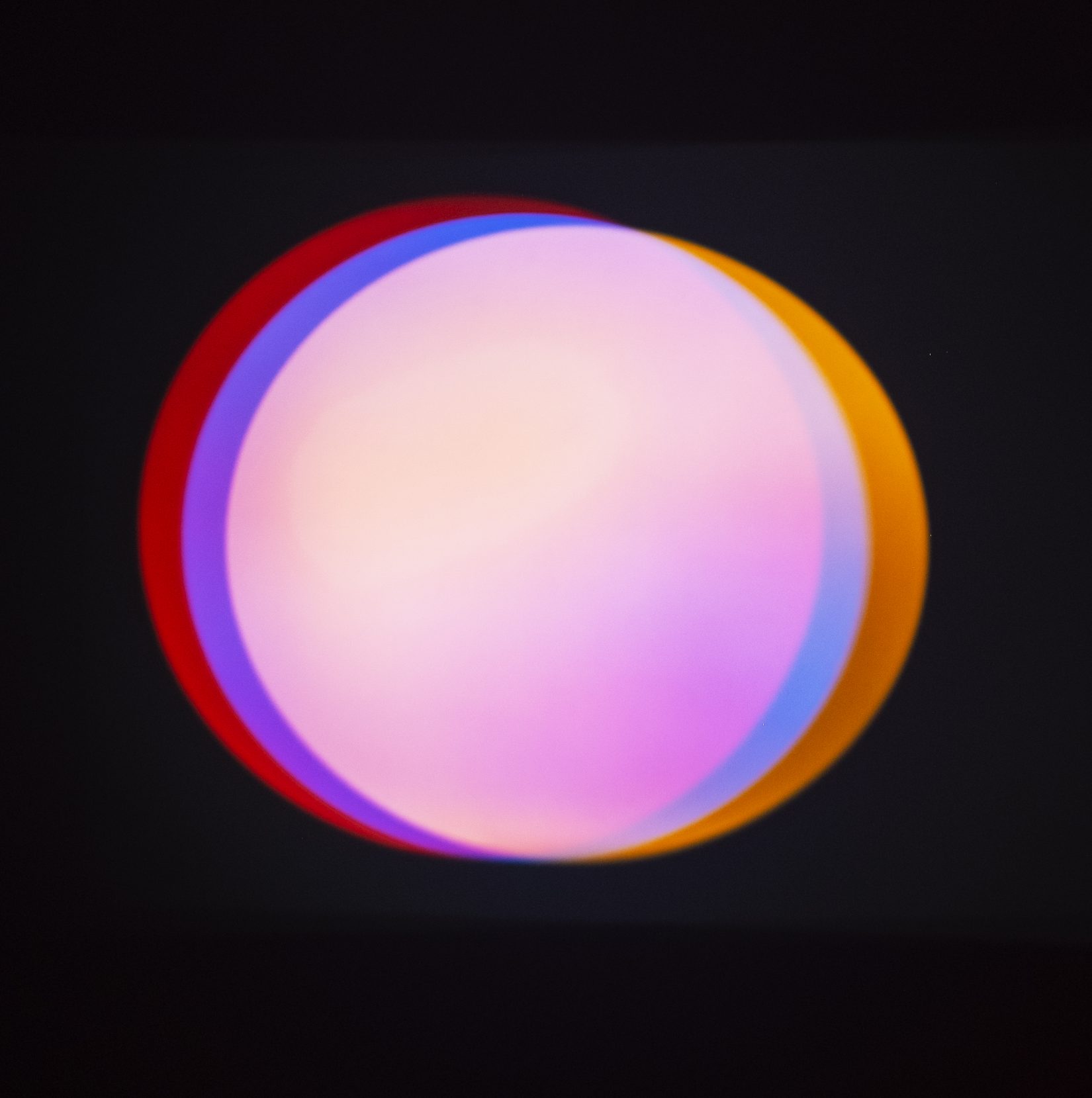 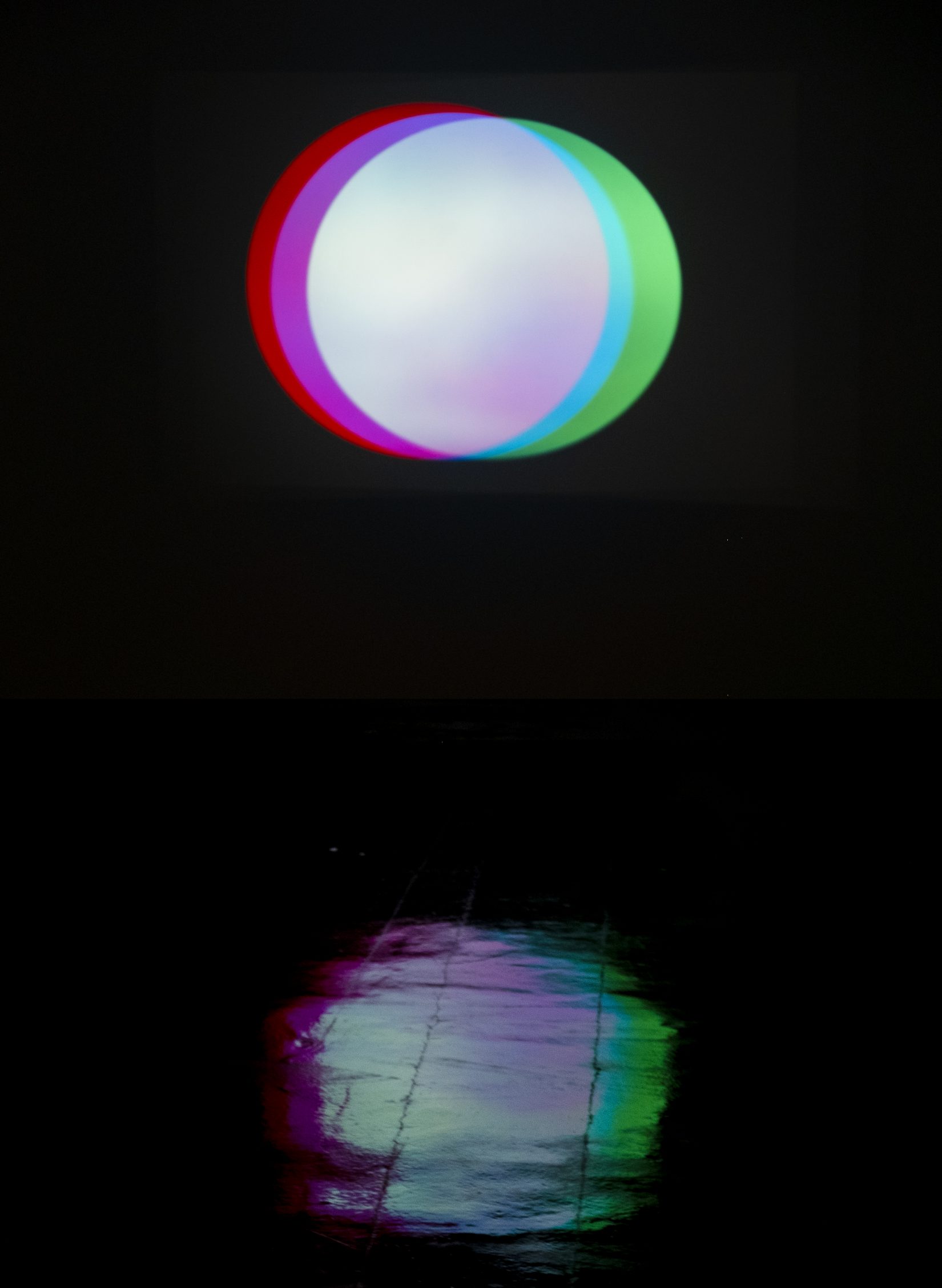 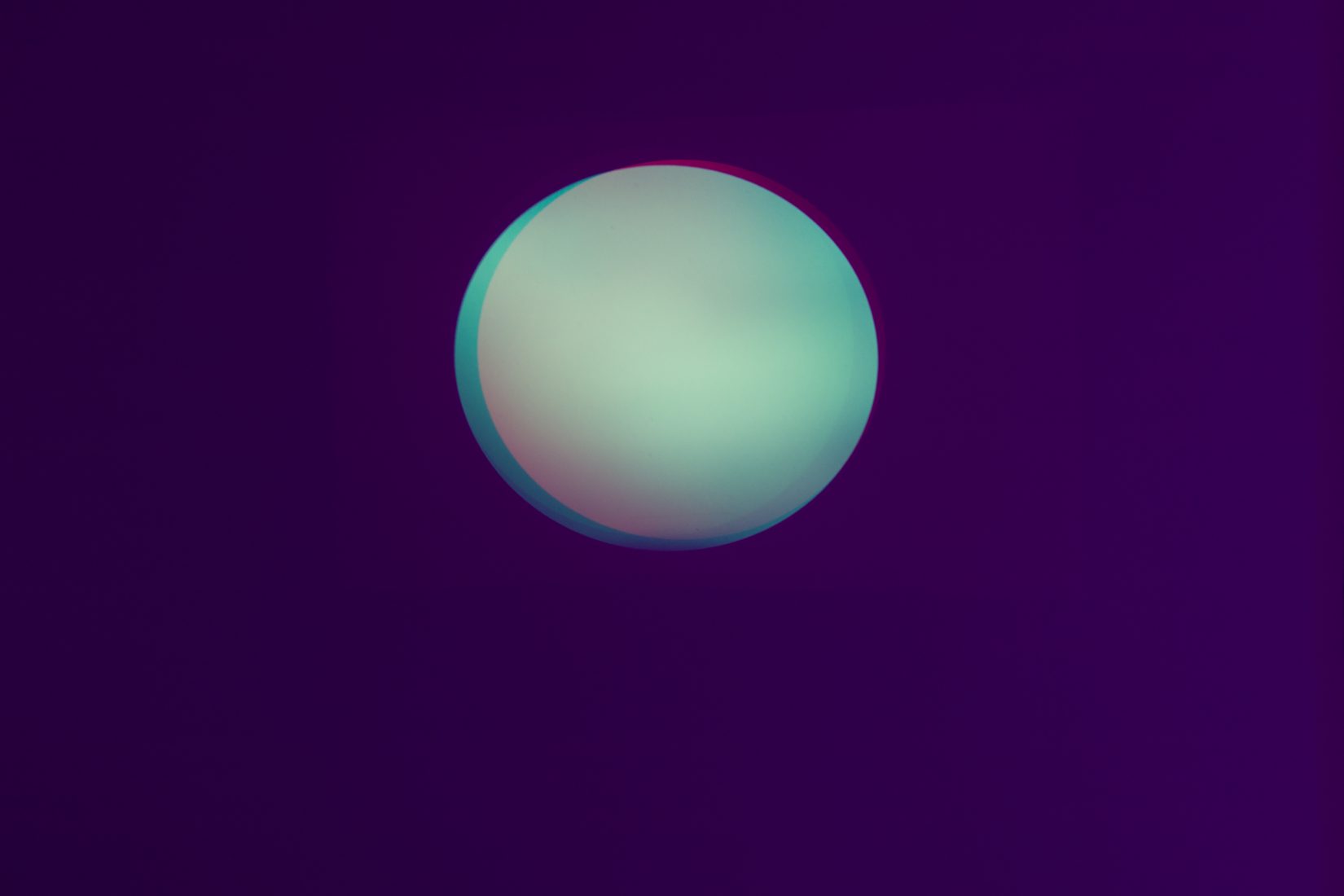 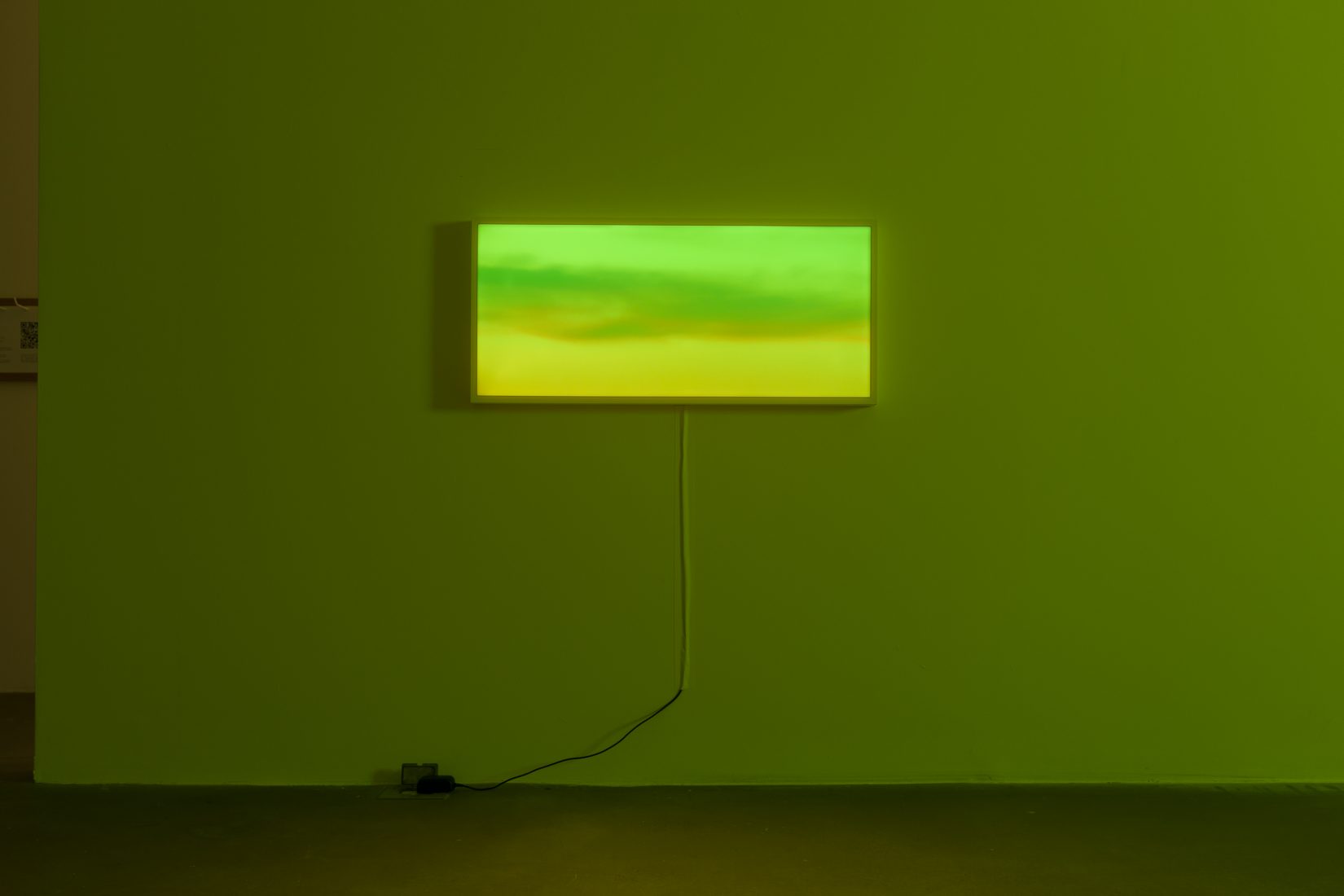 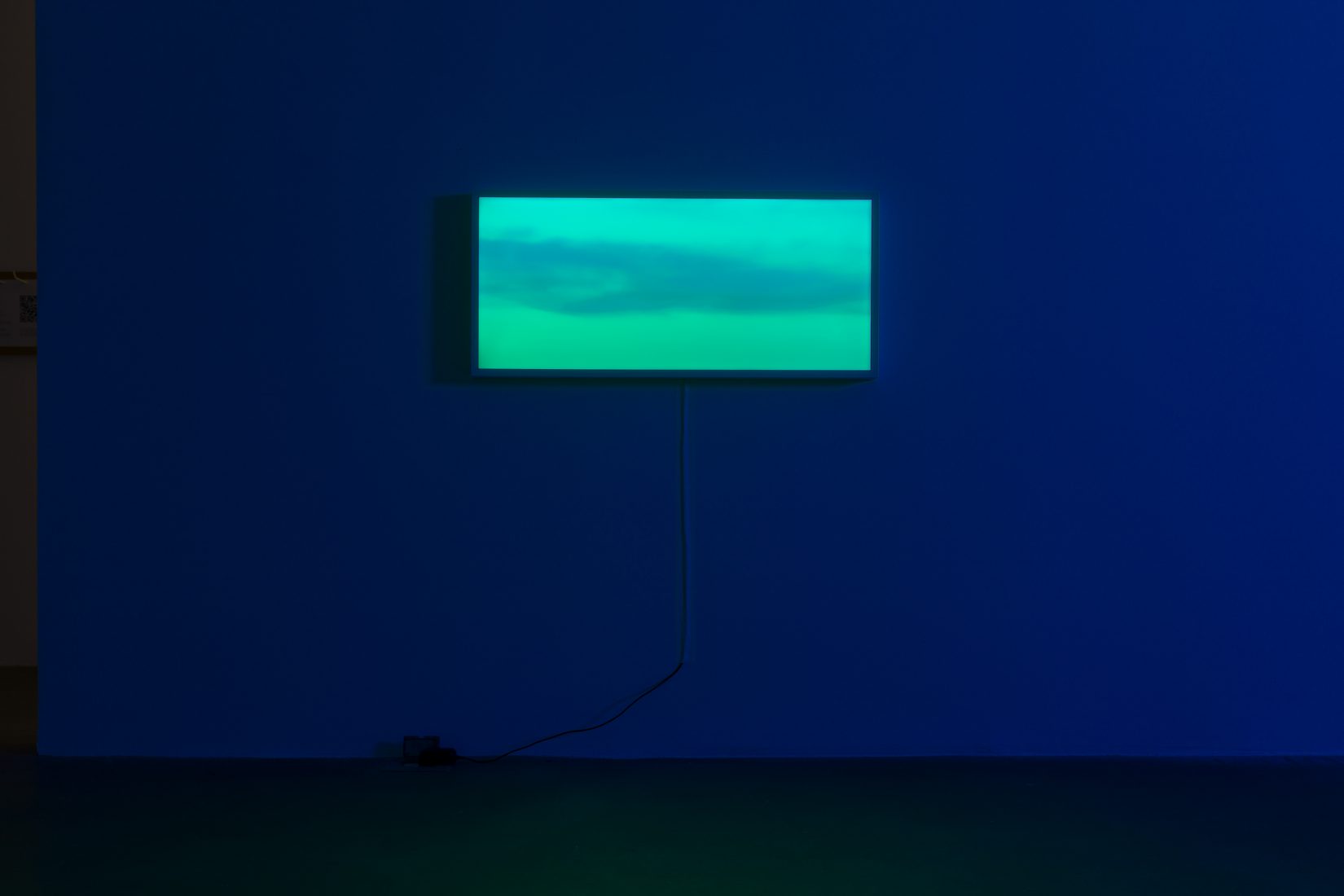 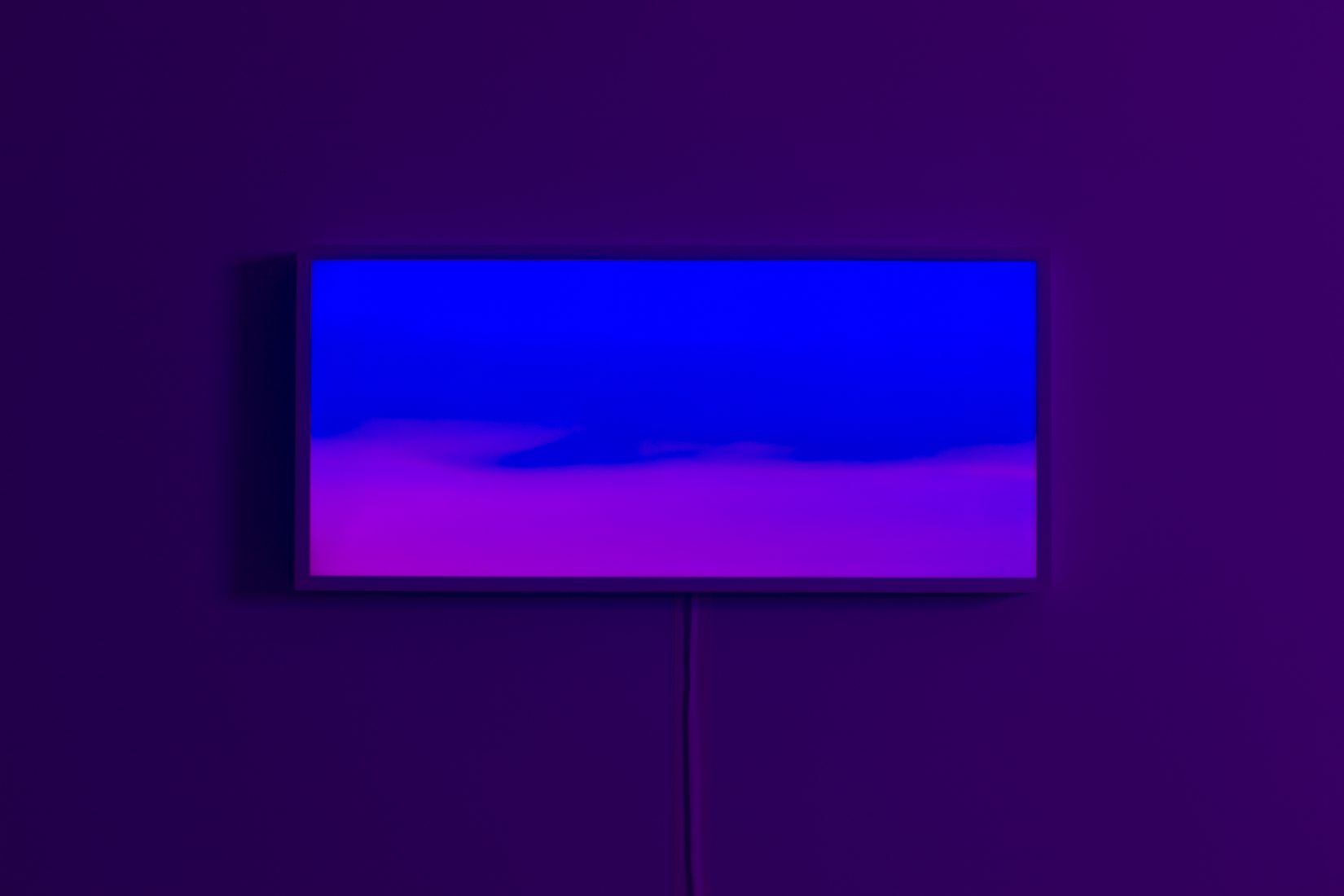 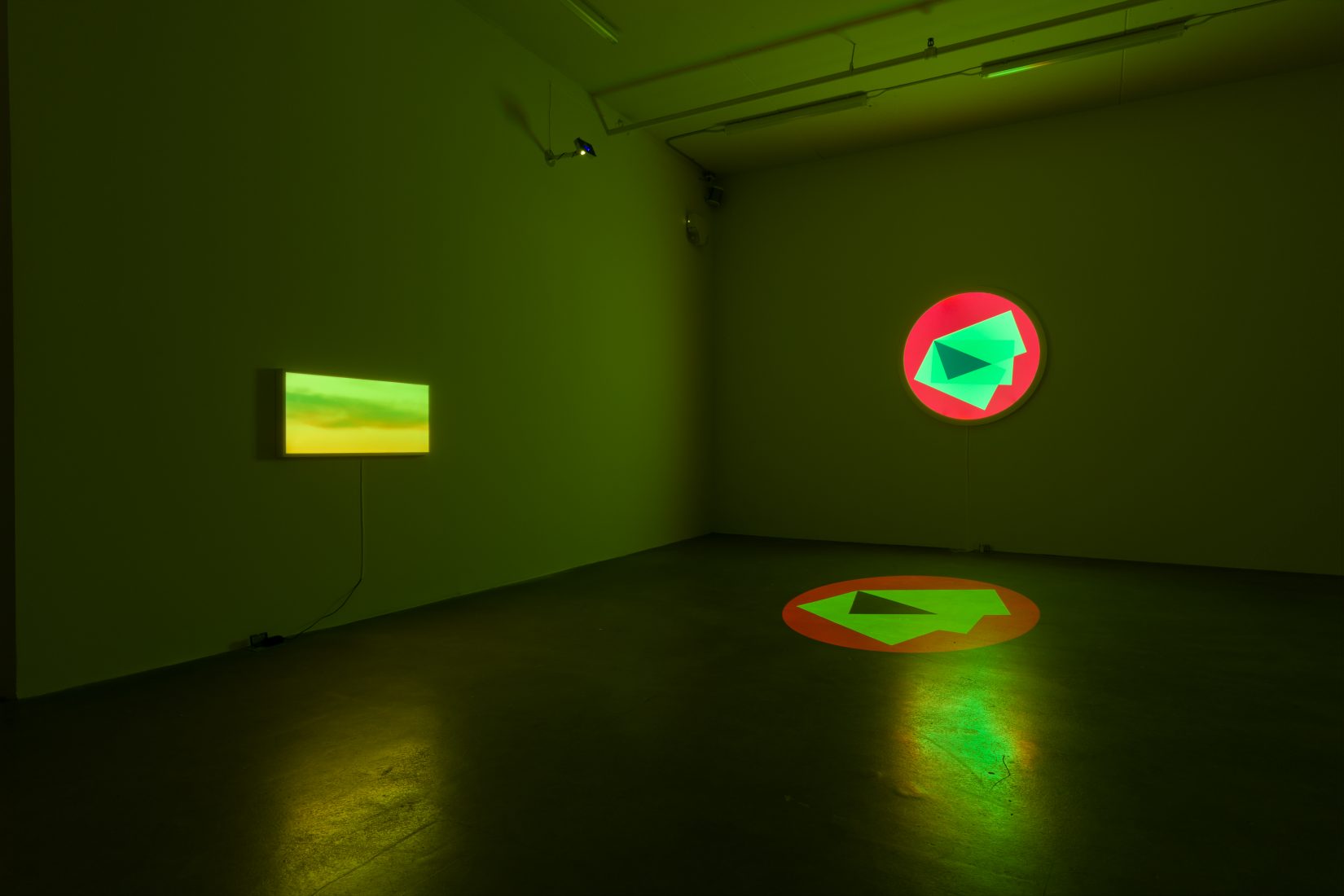 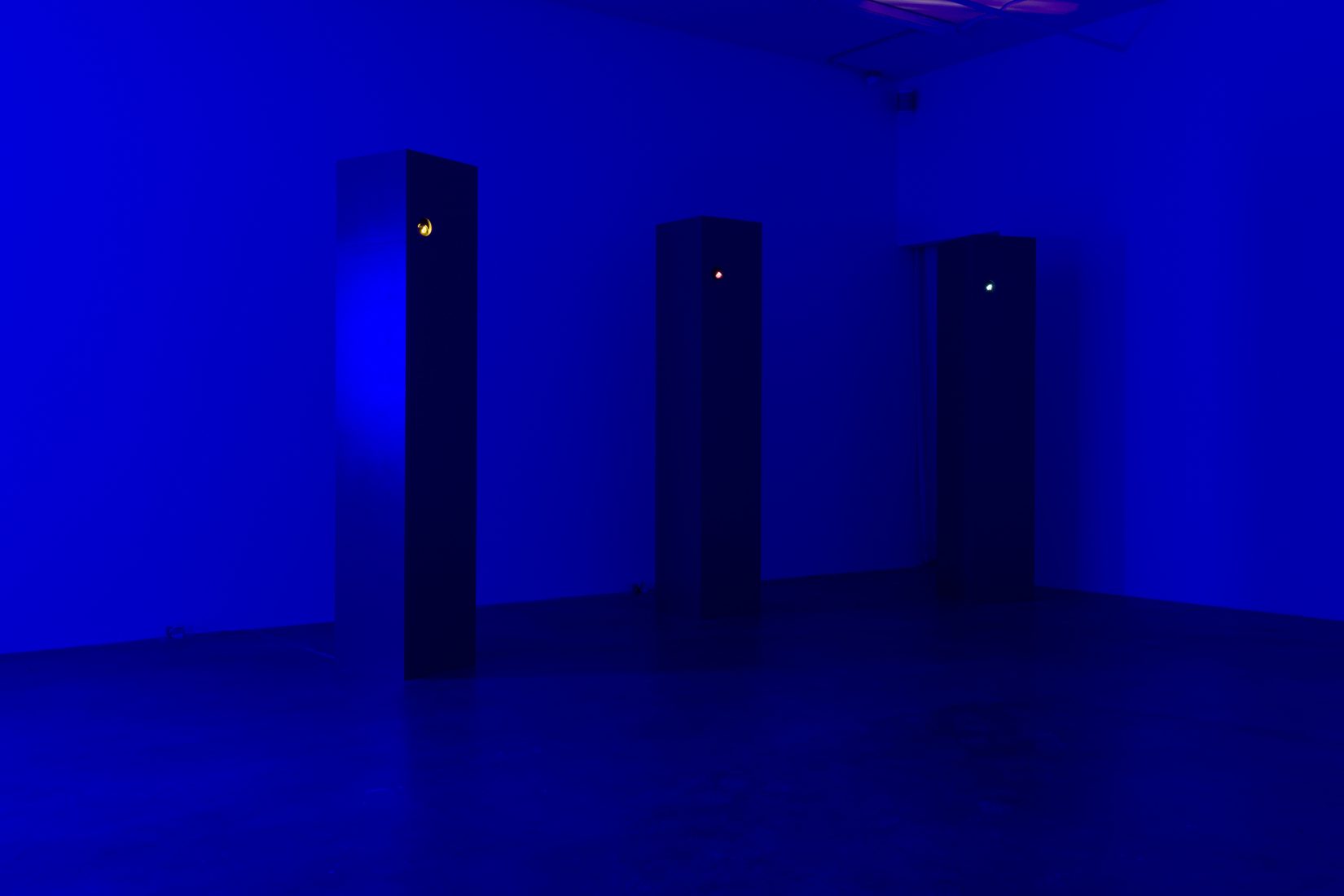 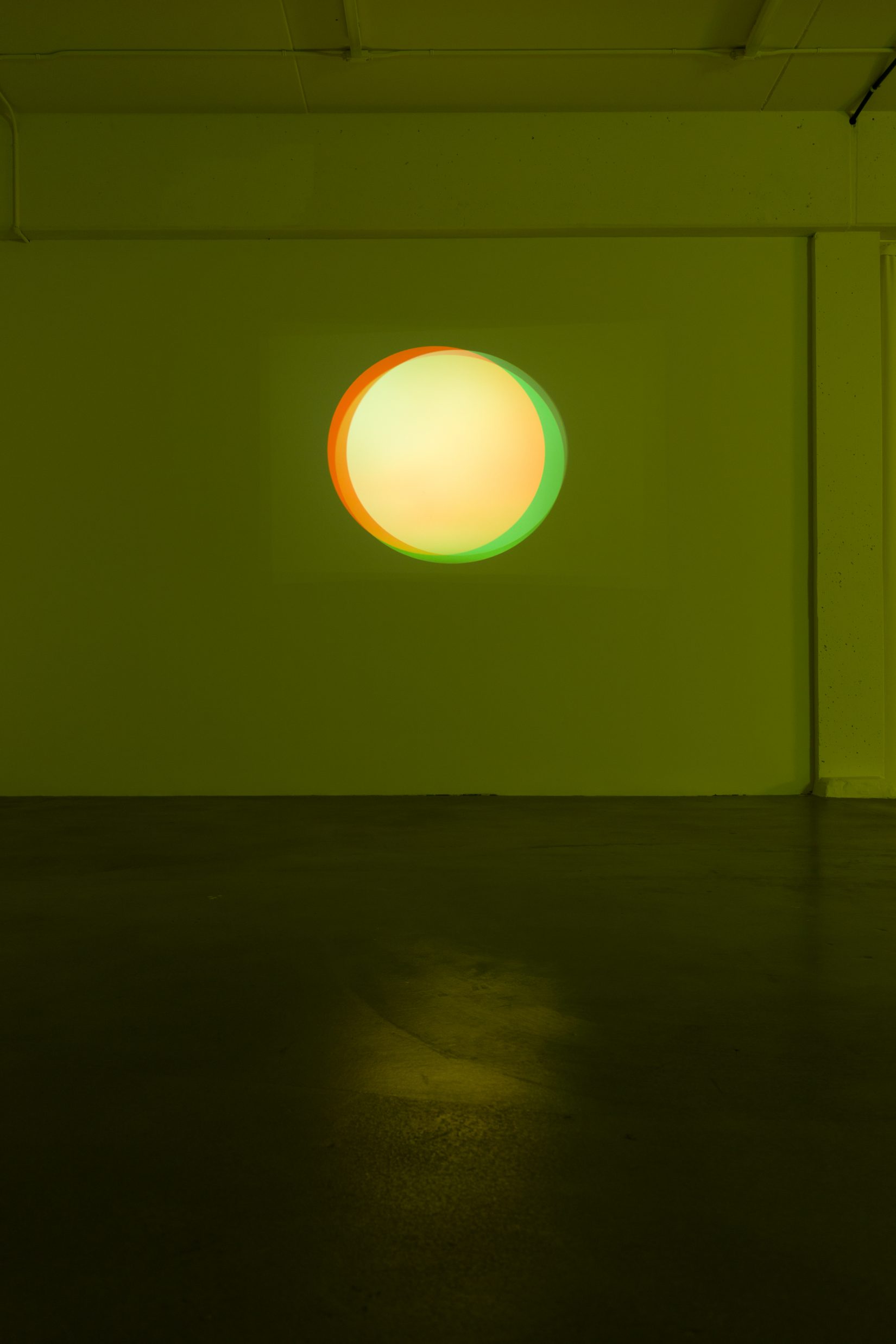 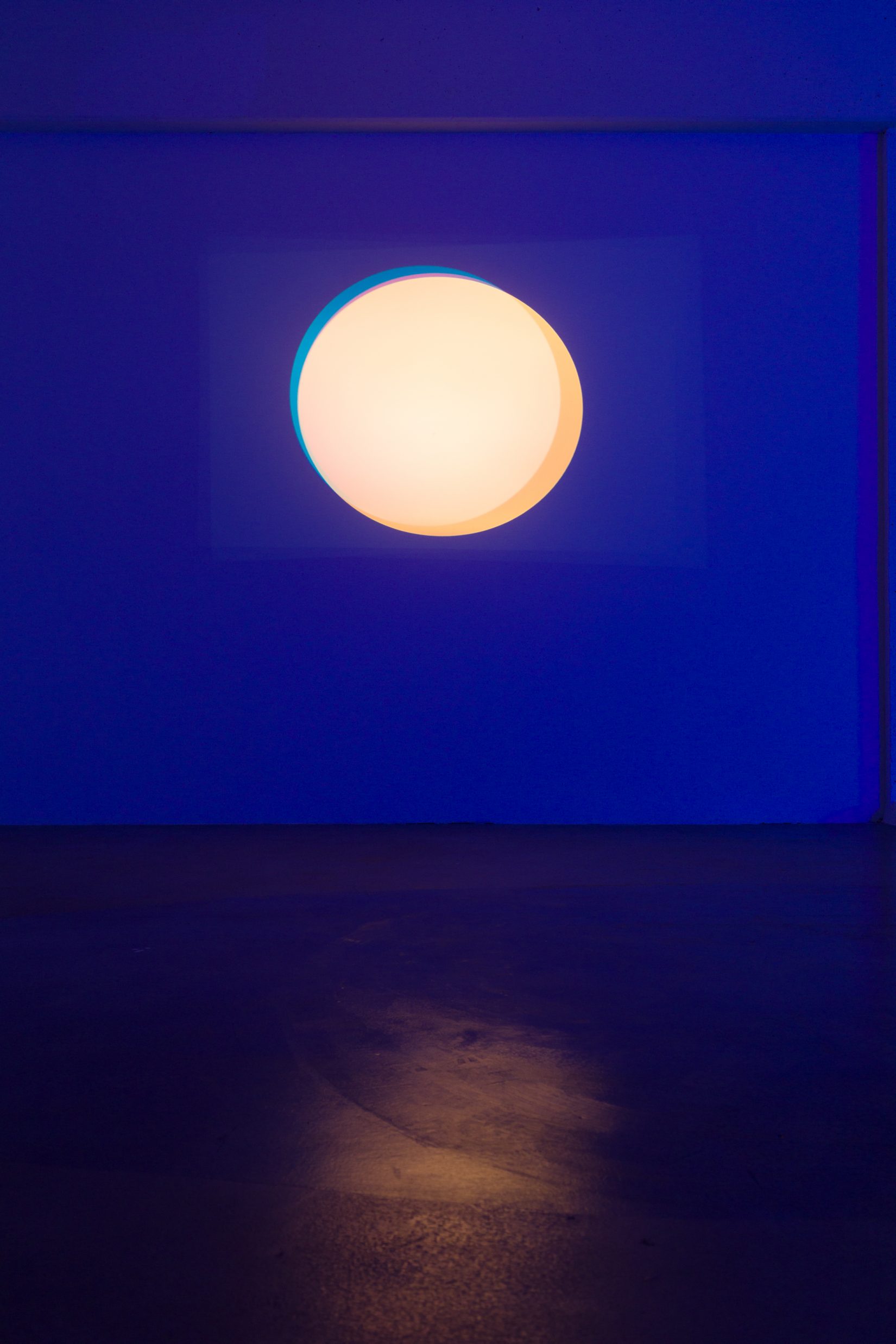 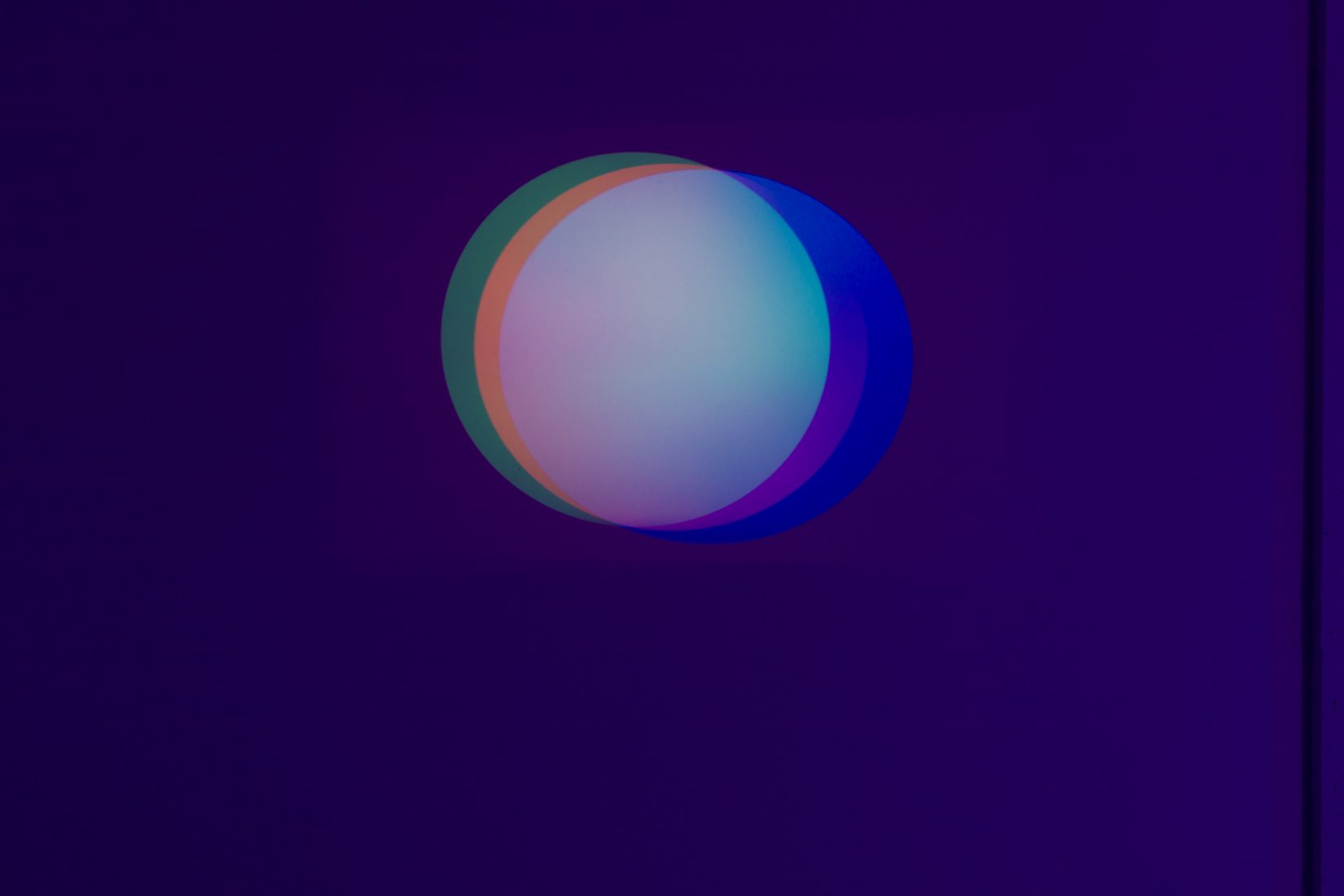 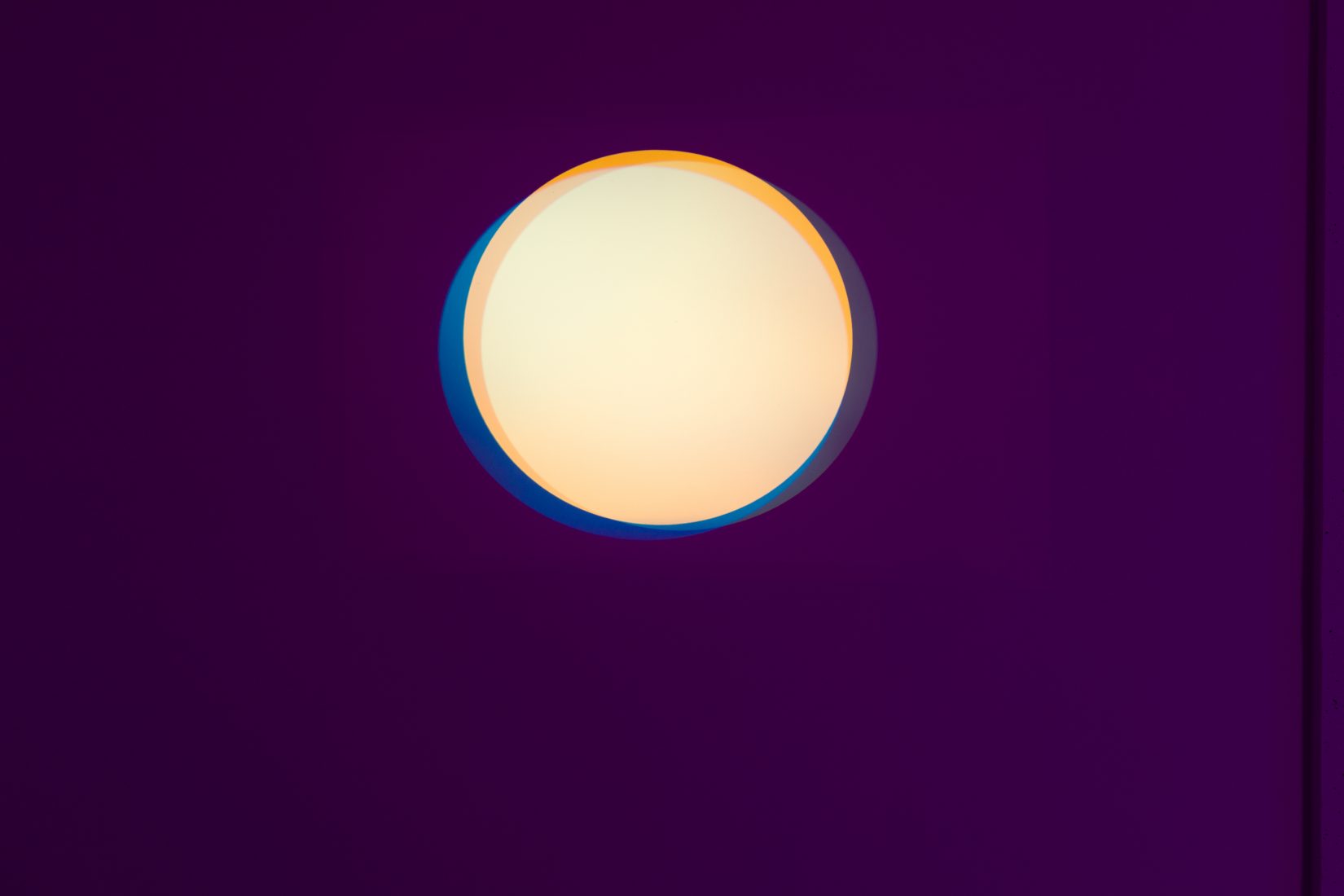 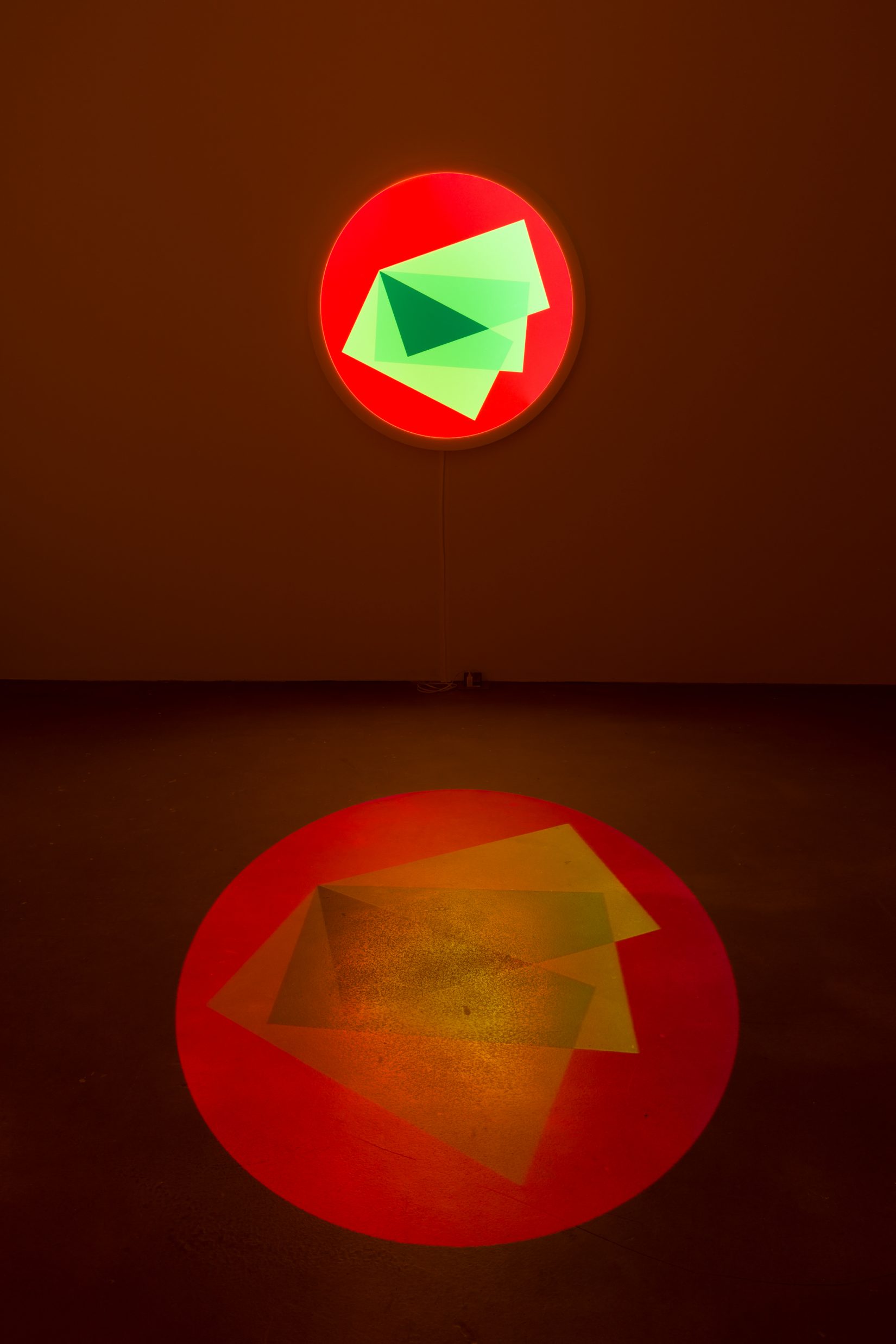 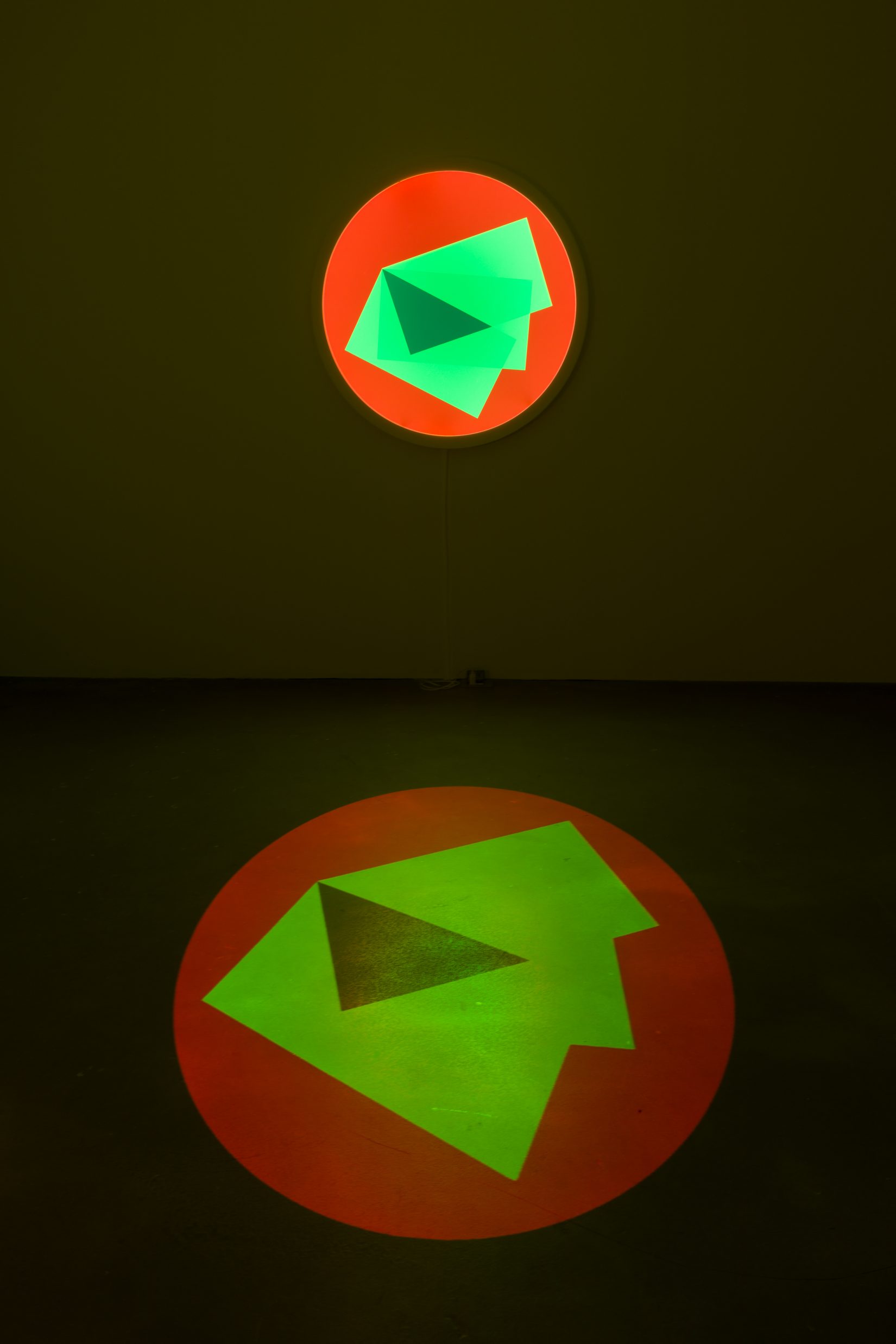 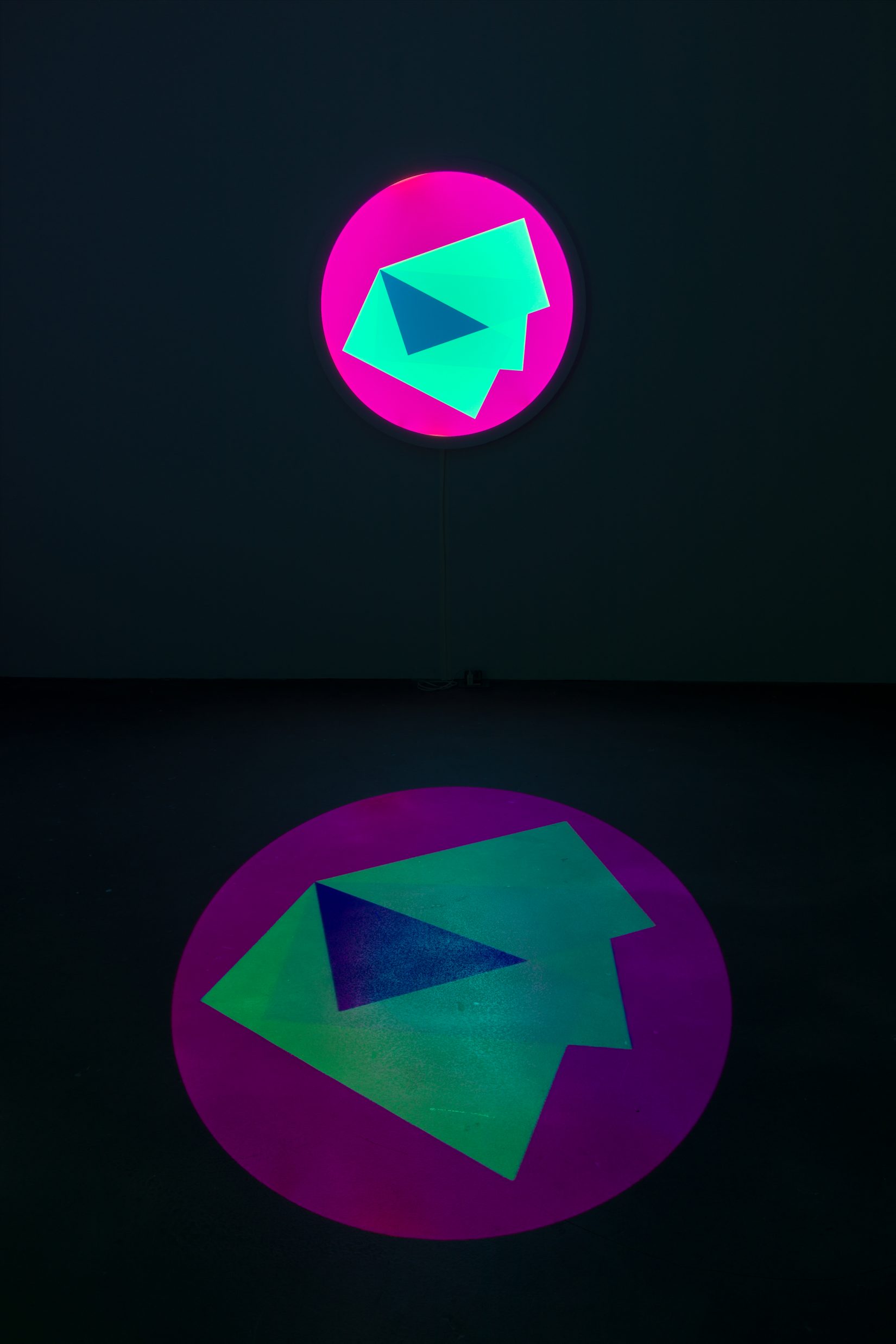 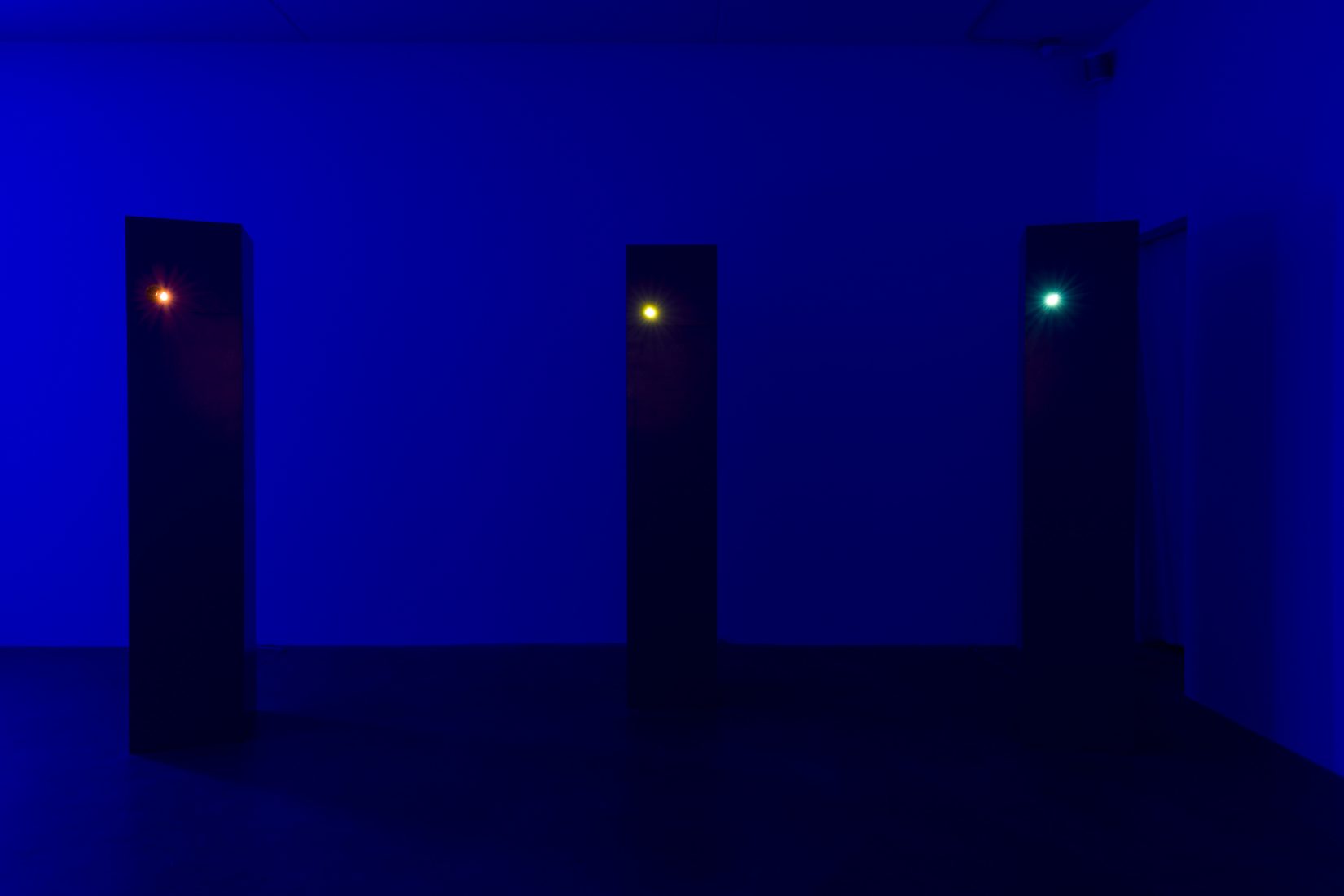 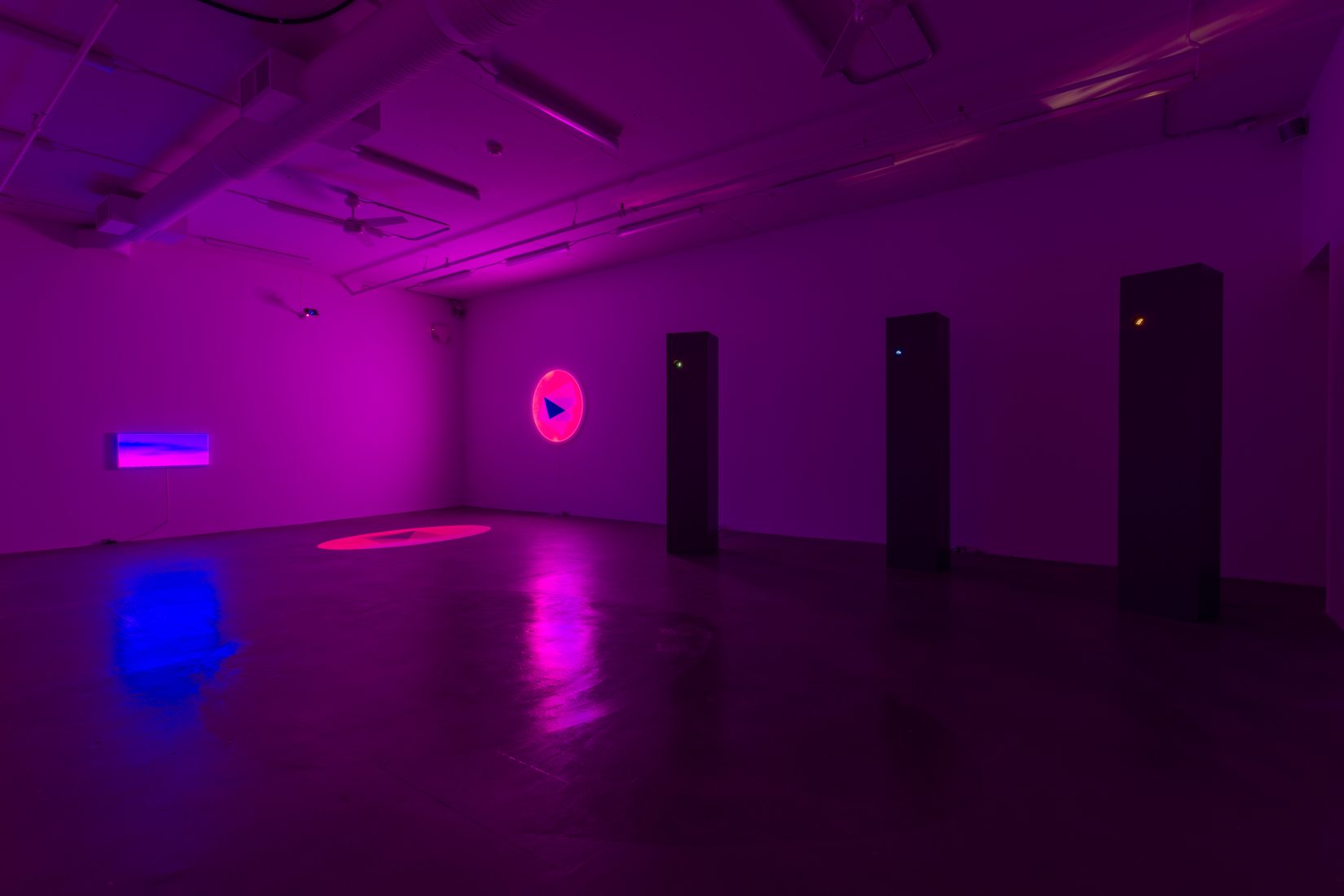 Prolonged exposure creates a sense of disconnect: staring too long, repeating words, looping audio. Repeating the same word again and again, it becomes meaningless, a phenomenon known as semantic satiation. Annie Briard examines this disorientation in the realm of vision, contending with the fallibility of human senses and the malleable nature of perception through images and light-based installations that create subtle rifts in what we think we see. By encouraging us to look longer, more deeply, and from a different stance, Briard’s work creates fertile dissonance, where the concreteness of reality begins to melt away.

Briard’s work can be succinctly defined by two interrelated principles: colour and light. Photography, a medium she’s often worked in, is perhaps more governed by light than any other. In her photographic work, the subjectivity of vision often shows up as trippy maximalism; saturated colours, chopped-up landscapes, double- or triple-vision. But the work produced in her Burrard Arts Foundation residency is almost minimal; light-based sculptural installation that immerses the viewer in a first-hand experience, rather than recreating a distorted one in two dimensions.

In The Glow of Two-Thousand Moons, Briard placed three analog slide projectors inside monolithic plinths. The projectors cycle through a series of 80 slides, all images of the clear, daylit sky shot by Briard using colourful cinema gels (transparent, tinted material used to create lighting effects in film). Working with seven shades of gels, Briard mixed and layered them to create countless variations and tones, a nod to the fact that just three colours combine to create the limitless spectrum of hues we see. The plinths create an overlapping, circular projection reminiscent of the theater of the heavens, constantly shifting and cycling through a predetermined rhythm. Briard asks us to consider how our own perception could be seen to act as another gel, or filter, shading our vision and altering reality. The cyclical projection also evokes the stages of the moon, itself a blank canvas coloured by human subjectivity. Fittingly, while we perceive the moon to be white, it actually shifts in colour depending on the circumstances through which we perceive it, such as atmospheric elements and telescope positioning.

Our understanding of the physical world, then, is forever distorted. But increasingly, it takes an even more altered form; the simulated. As weeks of social isolation have turned into months, a staggering amount of interaction comes to us through a screen.  Briard’s work has existed at the edge of perception for almost a decade, but this past year, more of us than ever have become hyper-aware of the uncomfortably constructed nature of experience.

Light is the supreme controller of how we see, directly and through infinite interactions with the elements that surround us. With Horizon Lightboxes, Briard presents the viewer with a lightbox image of the horizon, forever changing colours like a mood ring. These protean images bring to mind the way memory is constantly open to interpretation and coloured by circumstance. In the moment, too, reality constantly shifts and bends, like light refracted through a prism—see the phrase “rose coloured glasses.” Colour, light, and the inner world all combine to create their own unique hue that overlays our vision.

Finally, with Sun Simulations, Briard continues her preoccupation with light and subjectivity, with an added meditation on the digitization of human experience. Consisting of a contemporary, color-changing kinetic “stained glass window,” this most developed during her residency at BAF simulates the effect of sunlight streaming through a window. A video projection accompanies the lightbox to mimic solar beams coming through the panes of glass. With these works, Briard contemplates what effect it might have to simulate the sun, the most vital element of our universe. In Medieval cathedrals, stained glass windows were designed to communicate the sublime—in Briard’s hands, the most basic element of the natural world, the light of the sun, becomes a thing of wonder, akin to a spirit or a higher power. Such is the disconnect between the natural world and the average person. As with Horizon Lightboxes and The Glow of Two-Thousand Moons, so too does The Light of the Cosmos incorporate slowly shifting coloured lights designed to explore colour perception and mimic the ways in which natural light affects our interpretation of color.

The throughline of Briard’s work is how perception differs. Between individuals, each bringing their own biases and context to what they experience, the same scene can evoke an infinite array of moods and memories. No matter how earnestly we ignore our senses’ fallibility, it has a way of creeping in; blurred vision, wavering outlines, halos and auras brought on by the mutability of our consciousness and our shifting environment. For Annie Briard, human experience is delicate and fluid – in a sense, its own form of artistic expression.