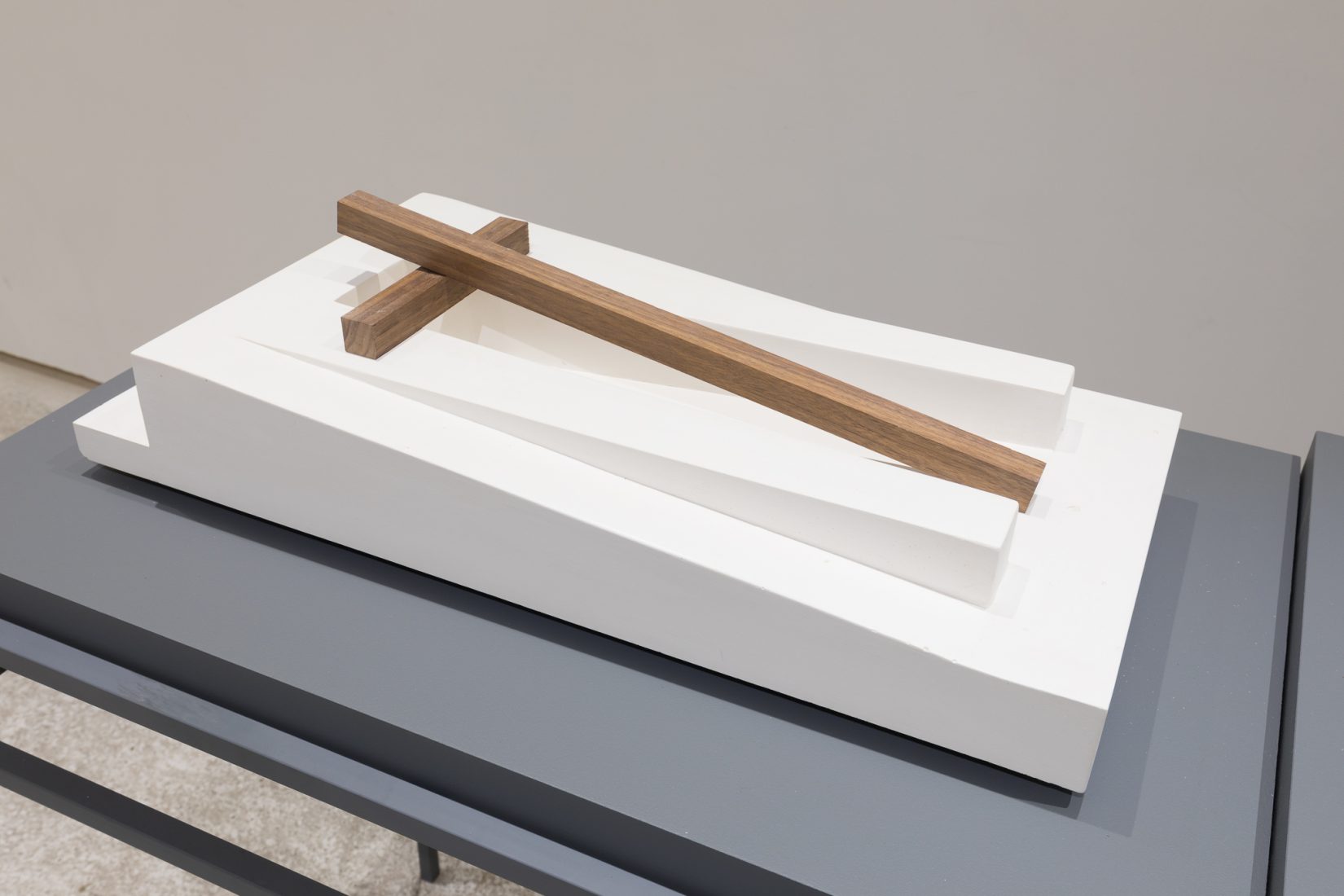 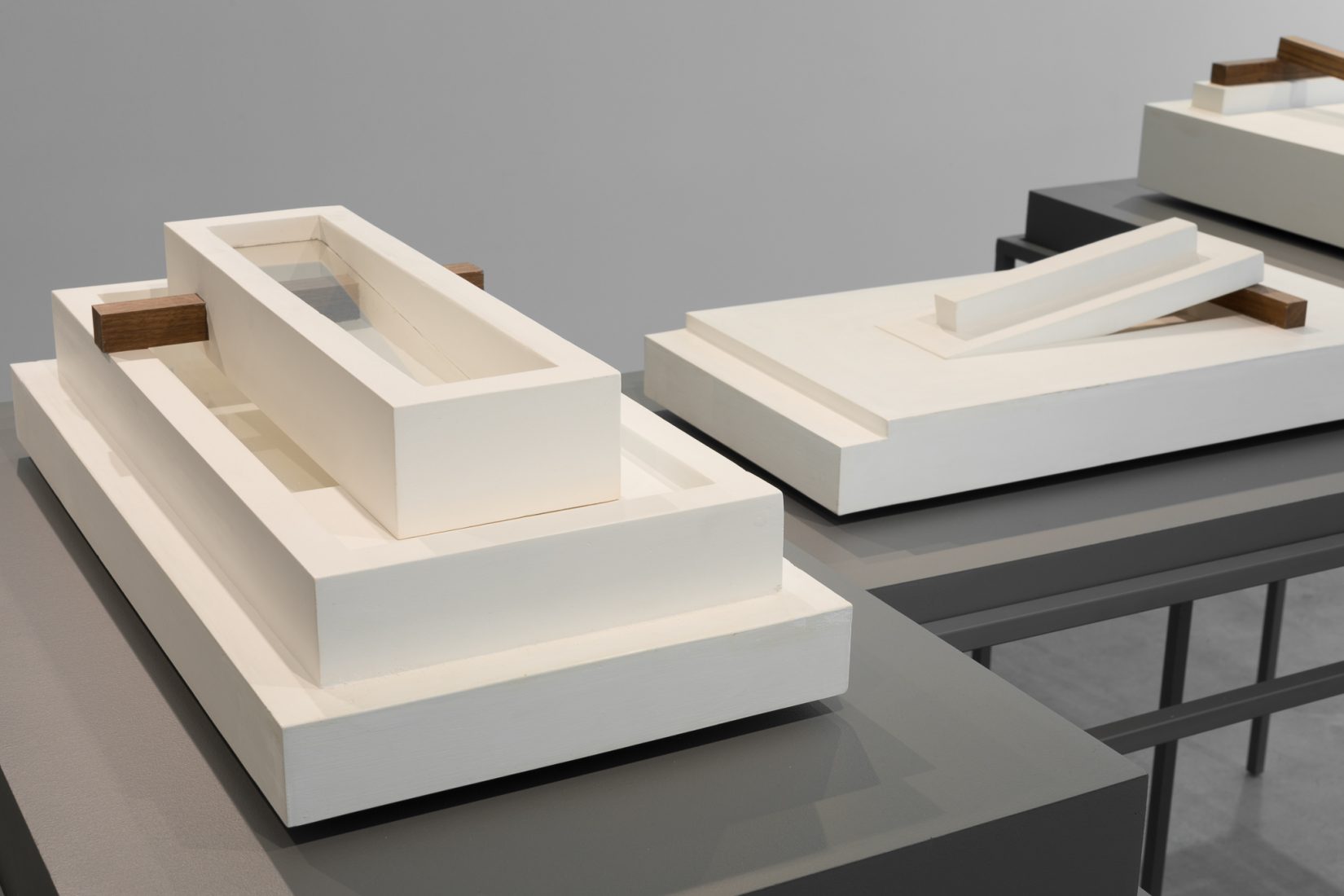 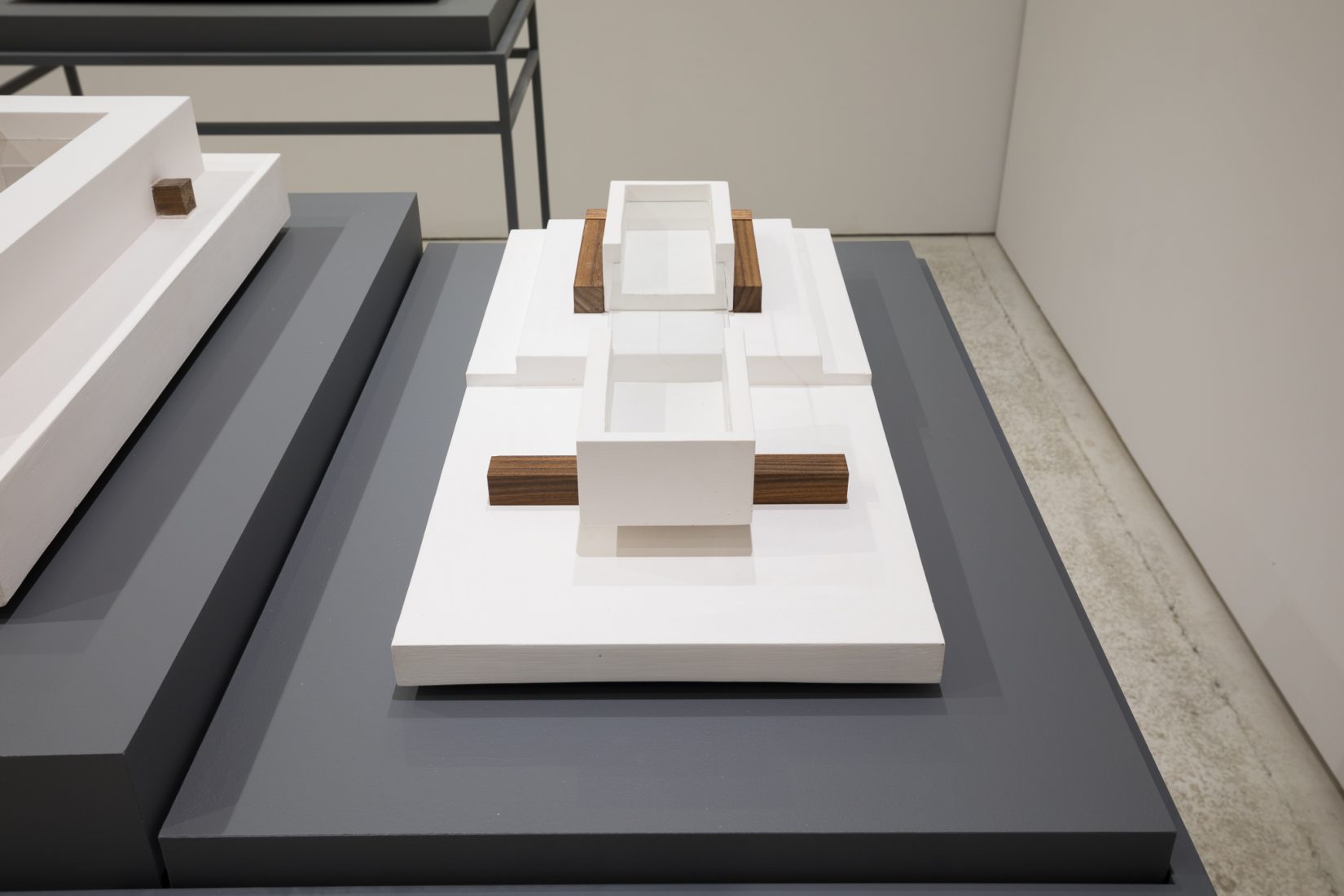 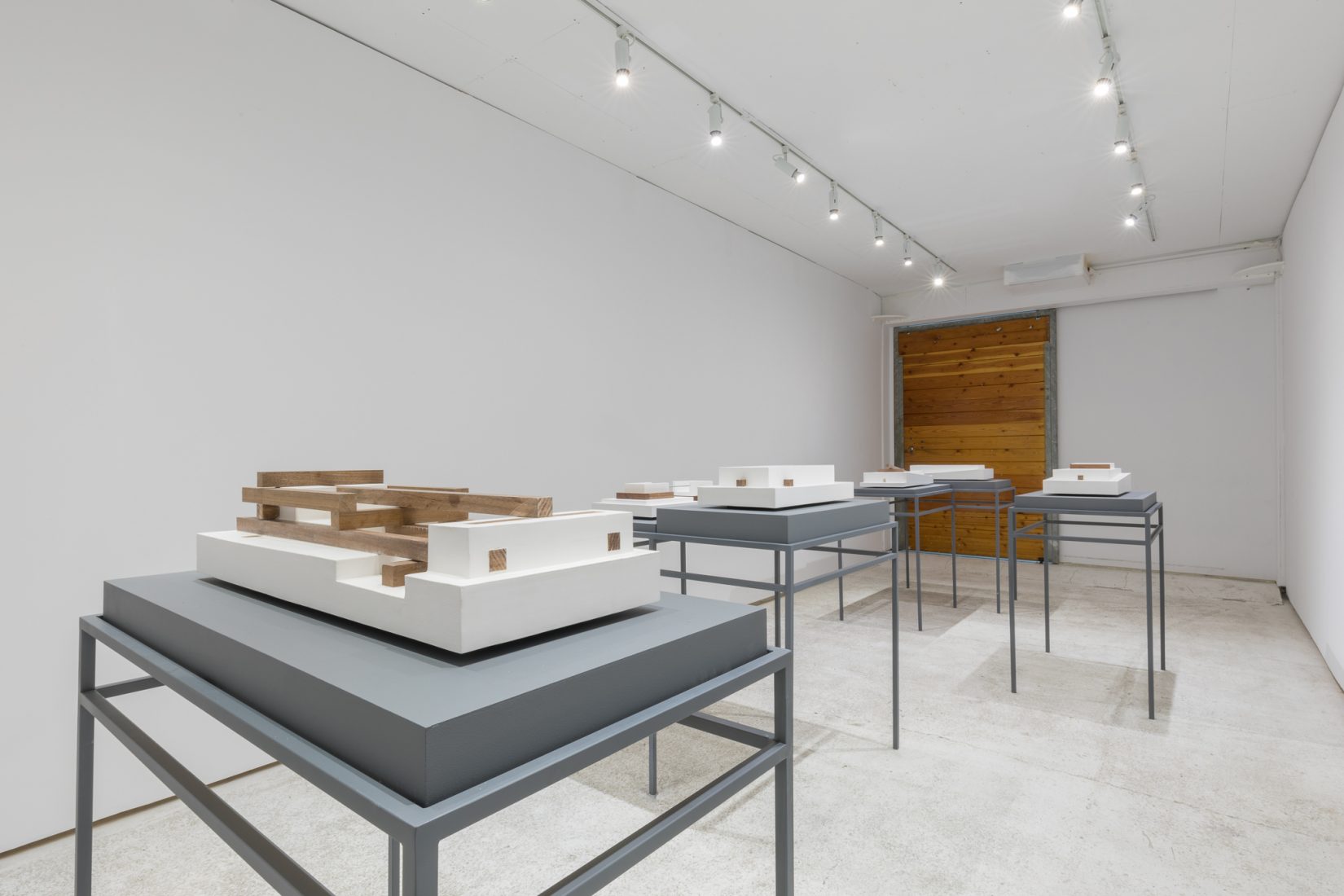 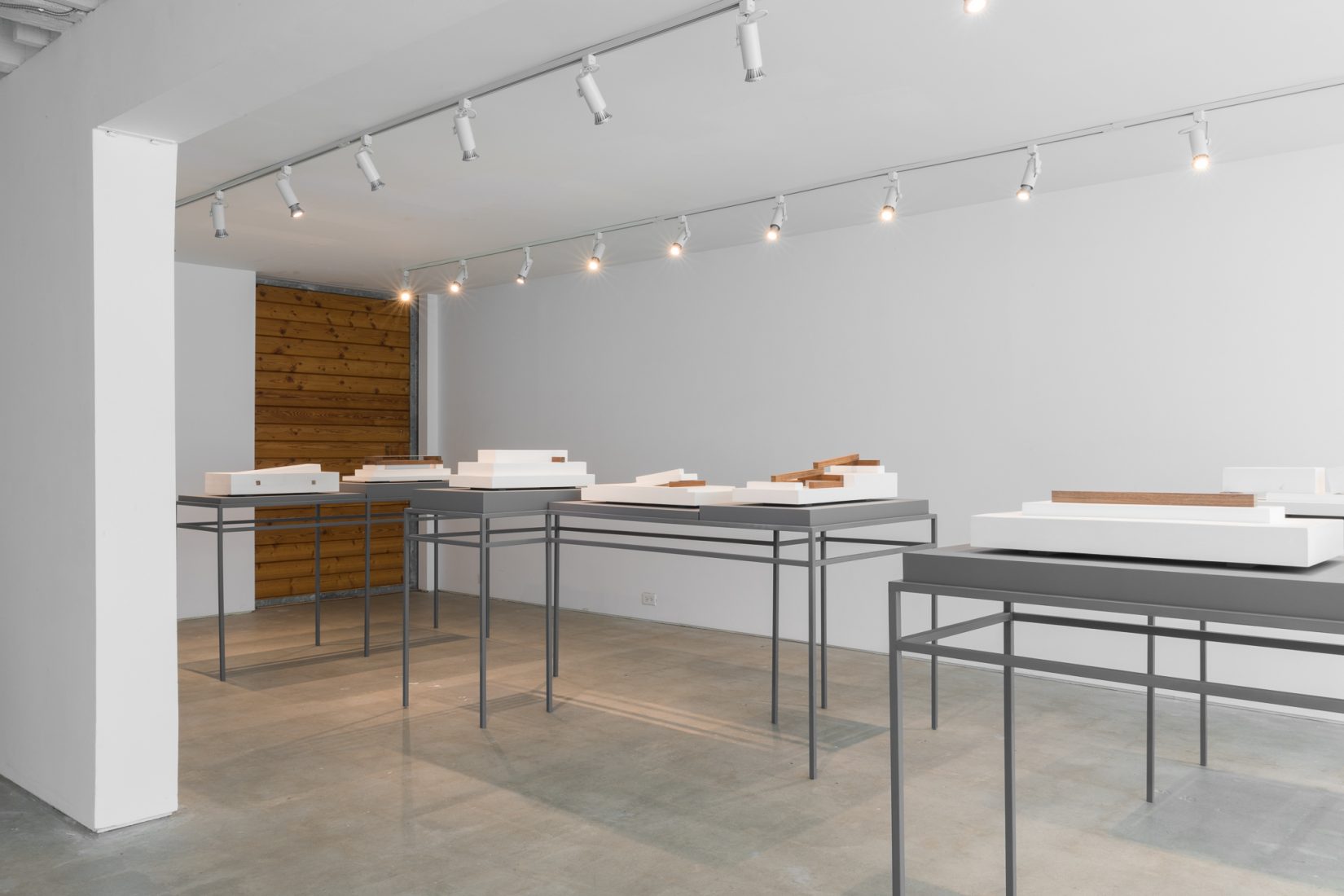 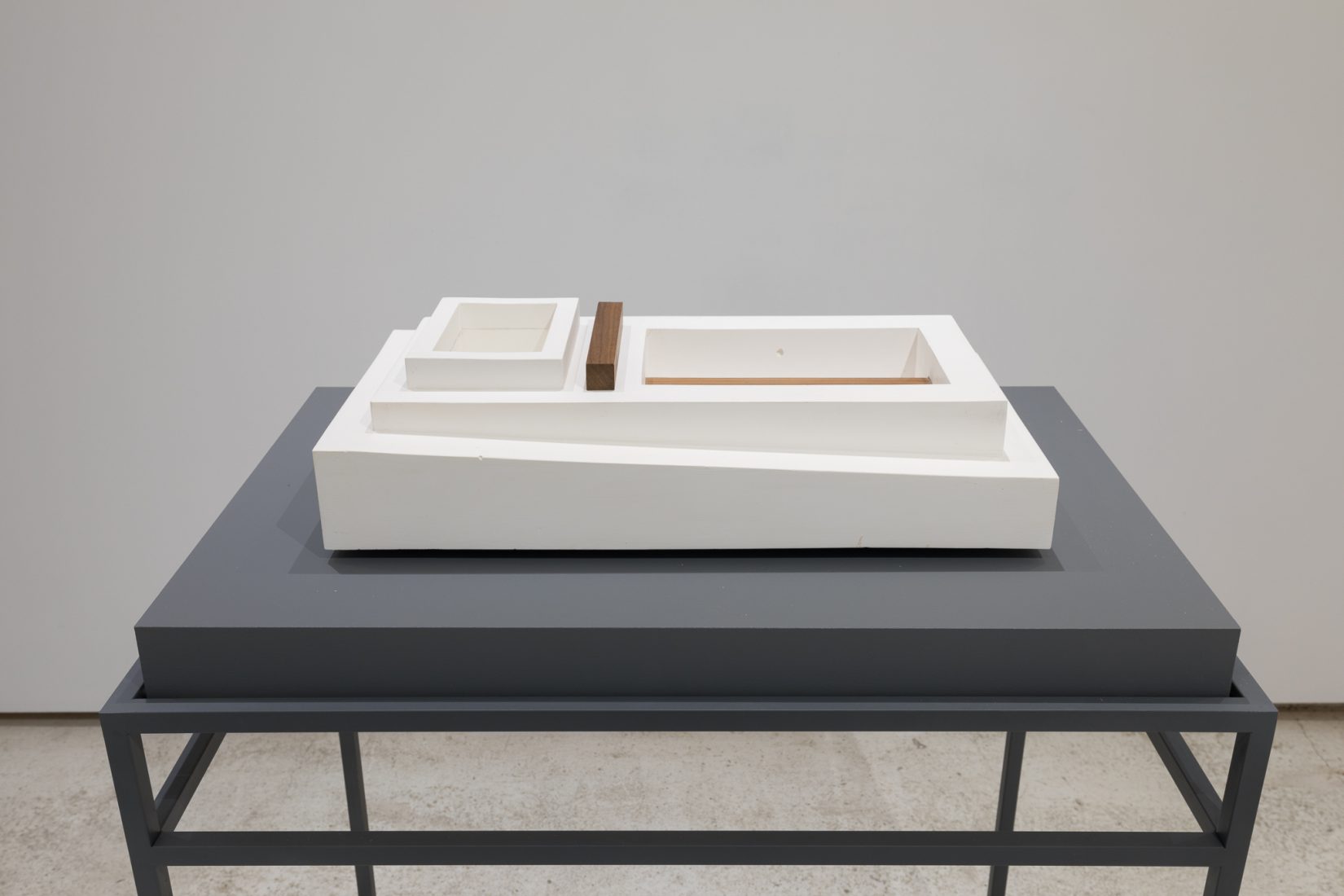 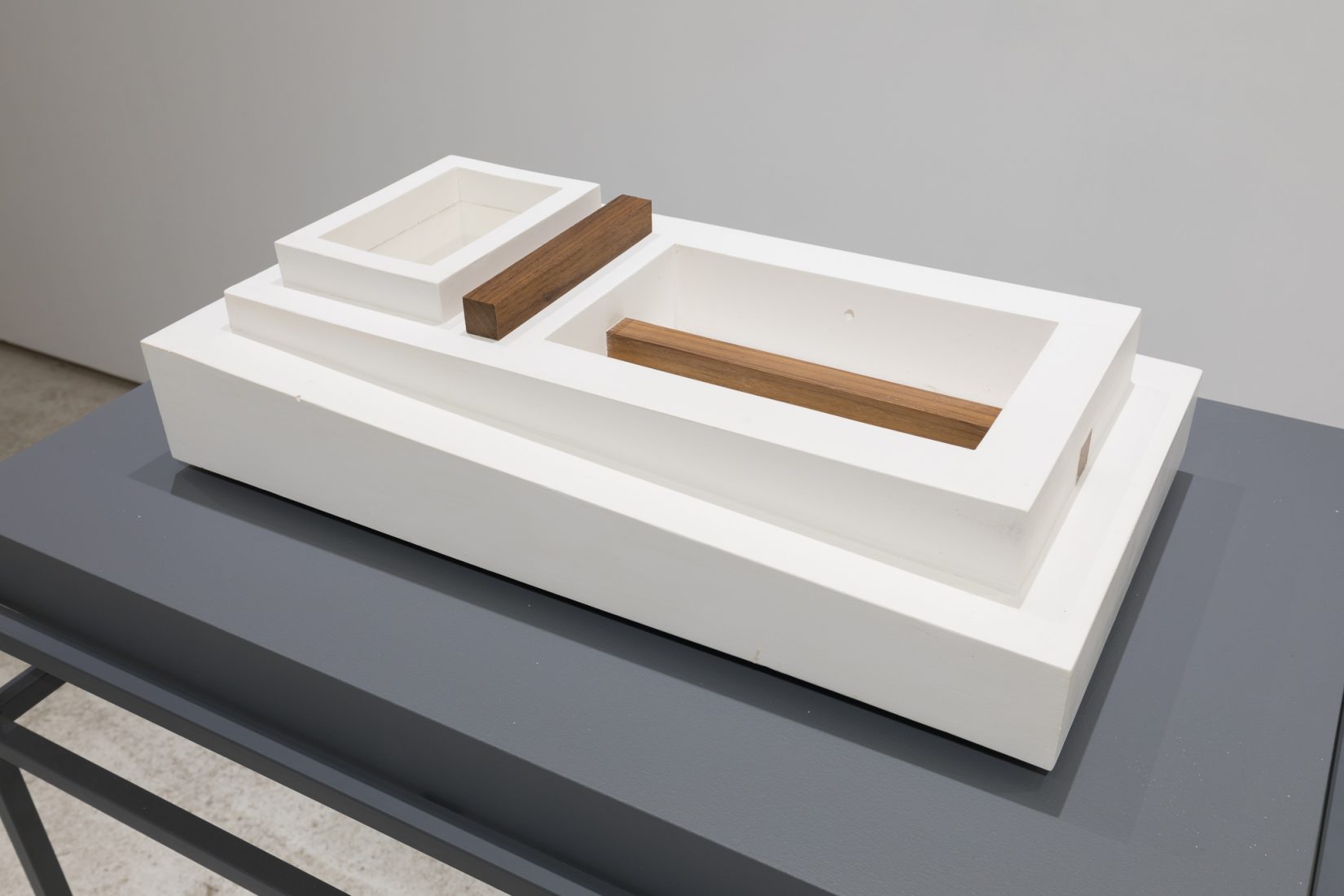 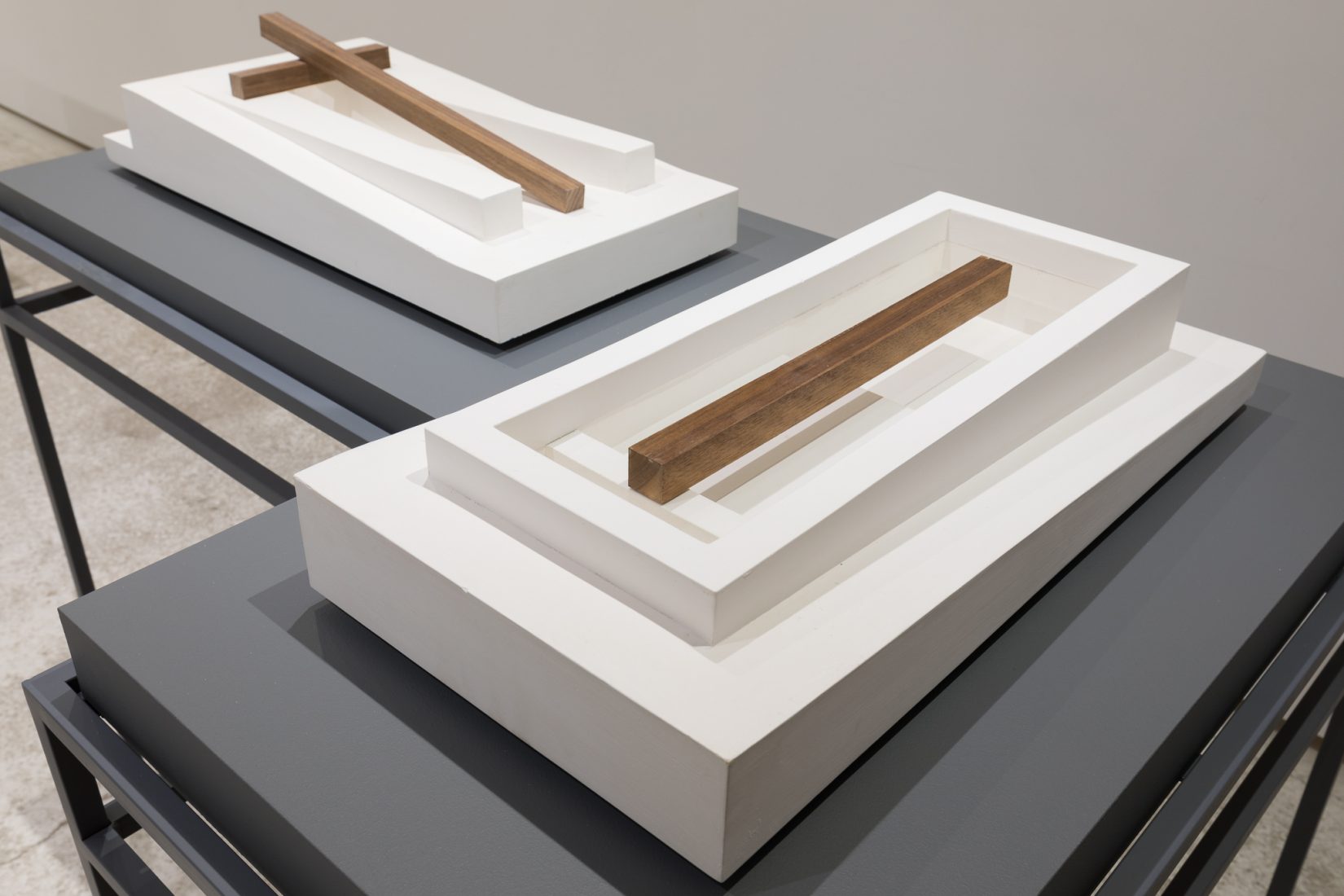 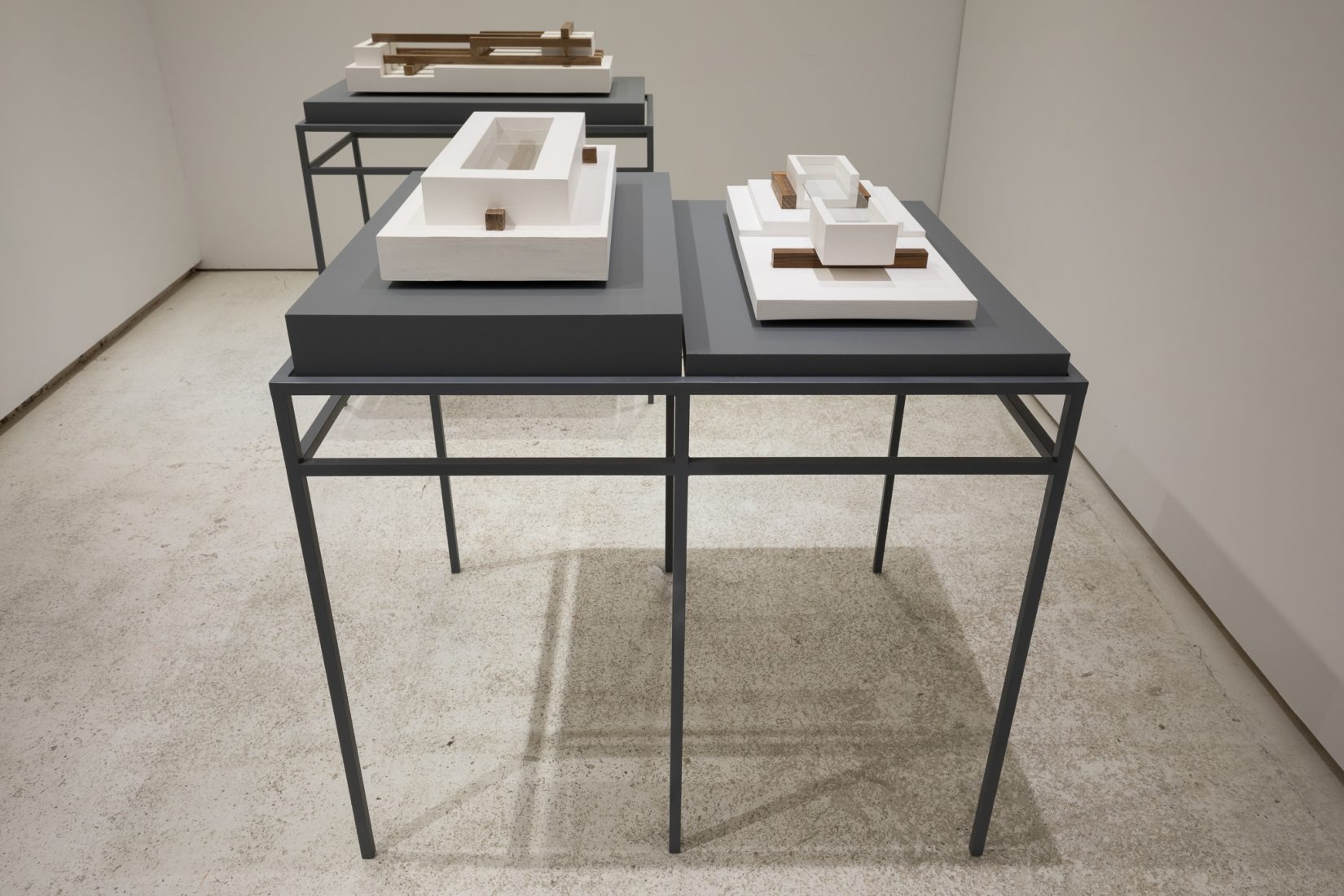 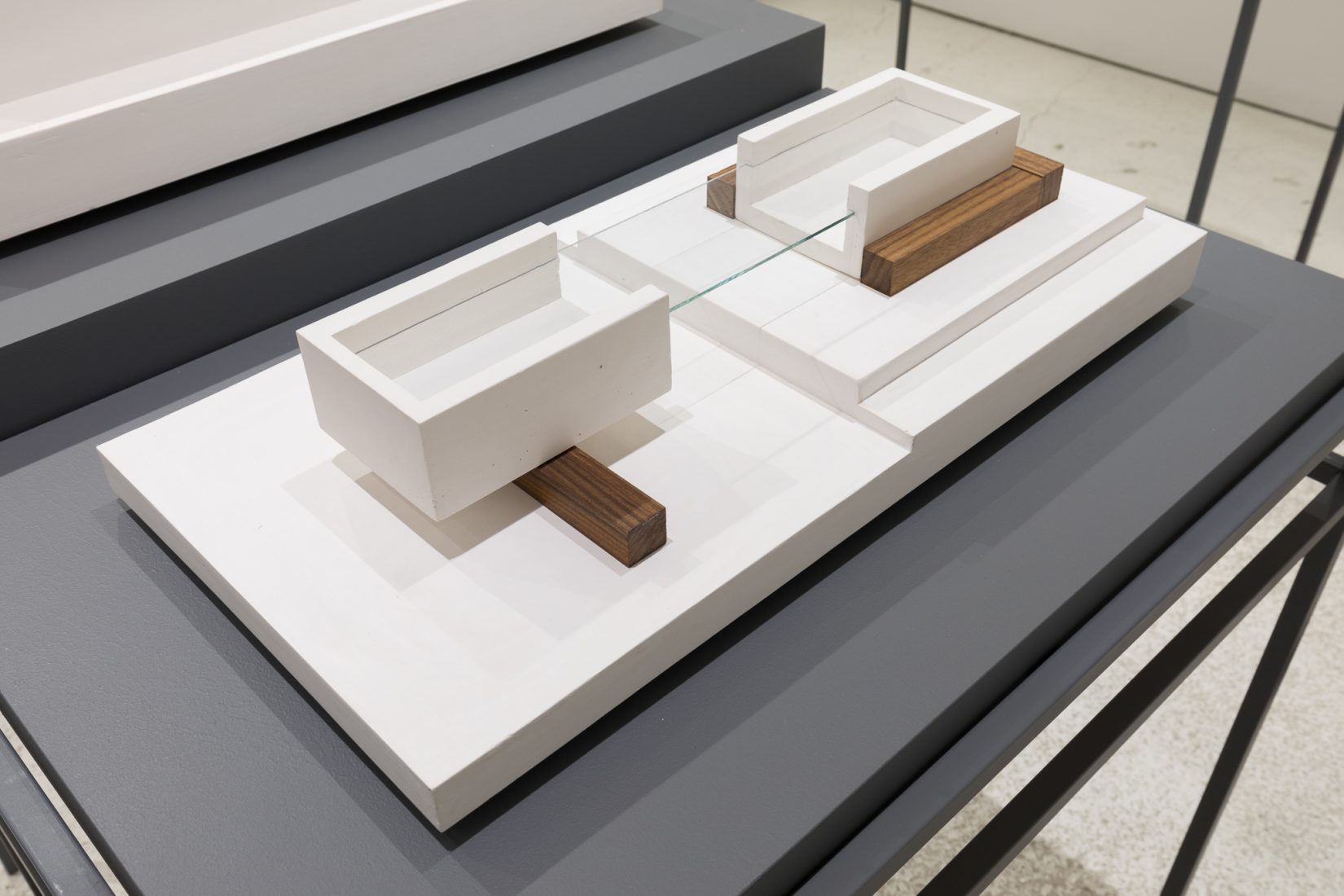 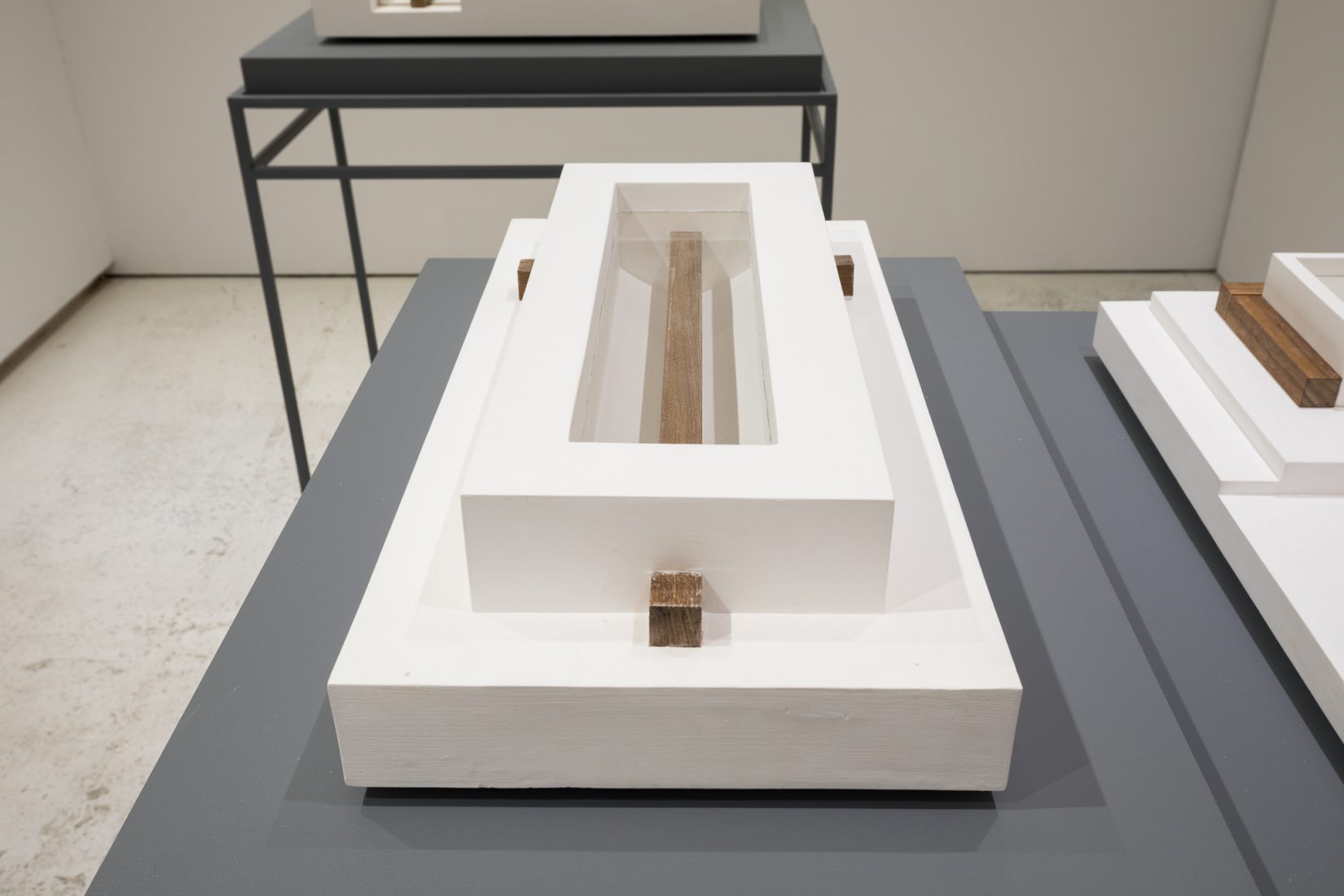 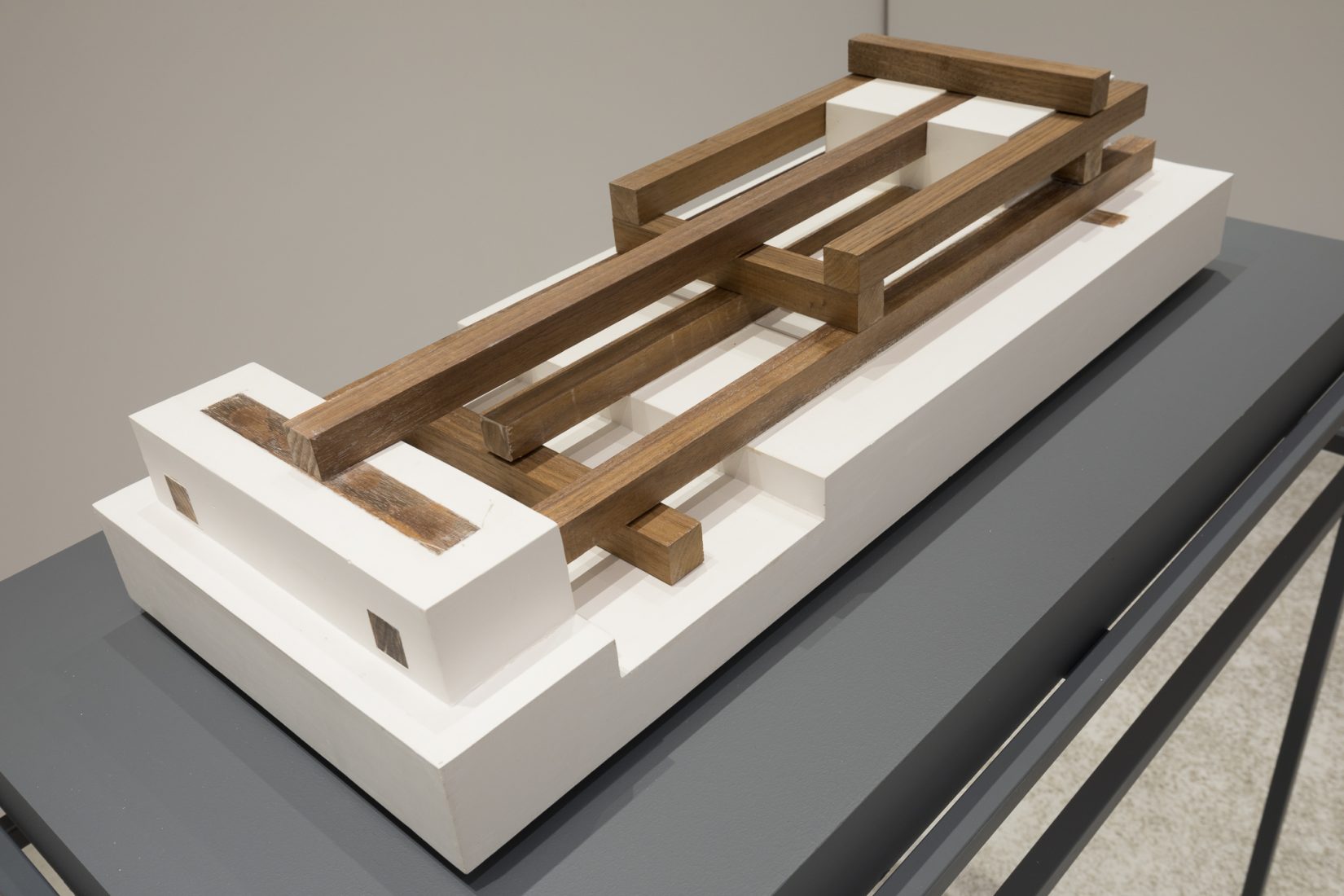 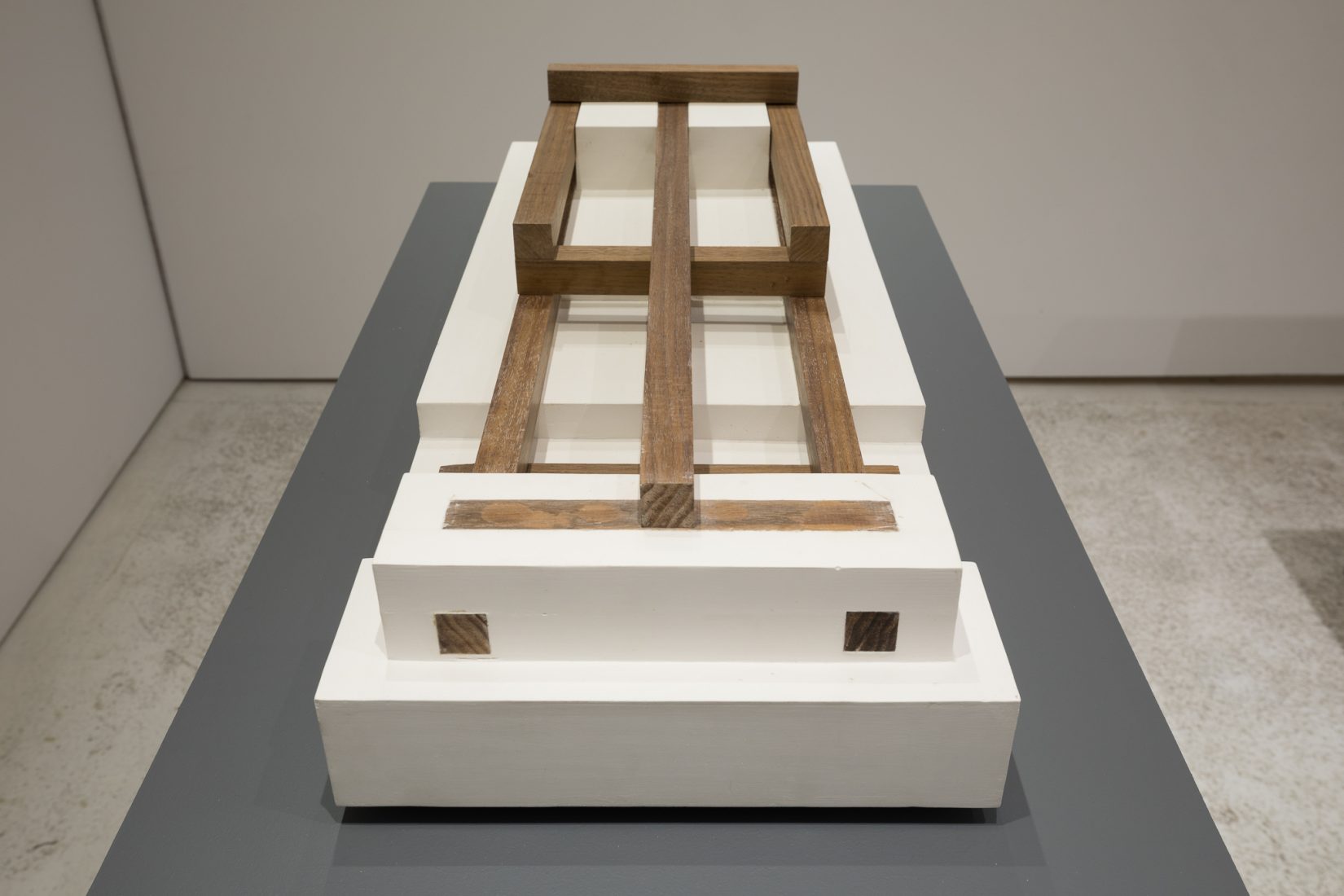 The exhibition A Third Thing crystallizes Richard Clements’ long-term interest in theology, language, and phenomenology. Undergirded by his studies of religious belief and the body’s experience of the world, A Third Thing showcases several pieces from a series Clements has been working on over the last five years. With the basic building materials of plaster, glass, and wood, Clements constructs sculptures that are esoteric in inspiration and architectural in appearance, evoking maquettes for buildings or theatre sets.

Clements describes the series as “being sculpturally seated within the quasi-spiritual aims of high modernism and the staunch phenomenology of minimalism.” For Clements, religious architecture and non-representational sculpture share congruencies, as both can spark contemplation of ideas of the metaphysical and the divine in the viewer. He aspires to catalyze that vital marriage of materiality and spirituality within his own work. He writes:

[S]culpture maintains a friction in it being both presentational (as real material fact) and inherently presentational (within the theatre of art)—it is both entirely itself and something other at the same time; it is, therefore, a type of gatekeeper or negotiator between the physical and the metaphysical. This friction continues to hold my attention because it is akin to our ontological friction as human beings.

Frustrated with the limitations of the prevalent rationalist, secular thrust of western thought from the Enlightenment up to the present, Clements turned to an eclectic group of thinkers: Carl Jung, Krishnamurti, Rudolf Steiner, Ludwig Wittgenstein, among others. In their writings, he found a shared proclivity for spirituality and a desire to redefine transcendence. Their perspectives resonated with Clements, whose works aim to unify, if not erase, the assumed divisions between the physical and the metaphysical.

In A Third Thing, plaster, glass, and wood are combined in interlocking components creating ostensibly simple spatial planes that concurrently suggest a breaking down and a reconfiguring of the form of the cross. White plaster is often cast around pieces of wood and panes of glass so that the materials appear seamlessly fused. Each material is deliberately chosen for its formal properties and symbolic potential. Clements’ use of plaster calls to mind arrested motion, the subservient mold, temples, or the “white cube” of the modernist museum. While plaster is typically used on the surfaces of a structure, with a material like wood providing the framework, in Clements’ sculptures, plaster serves as the primary building material. Additionally, he uses wood as verdurous growth, which contrasts with the desaturated calcified white of plaster. Finally, Clements is interested in glass for its transparency, simultaneously suggesting presence and absence—it can be used both for the presentation and the protection of objects, letting in light while shielding inhabitants from the outside world.

With A Third Thing, Clements mines sculpture for its power to express questions of an esoteric nature beyond the boundaries of the mundane materiality of plaster, wood, and glass of his structures, and invites viewers to contemplate possibilities for the mystical in their immediate experience of the world.