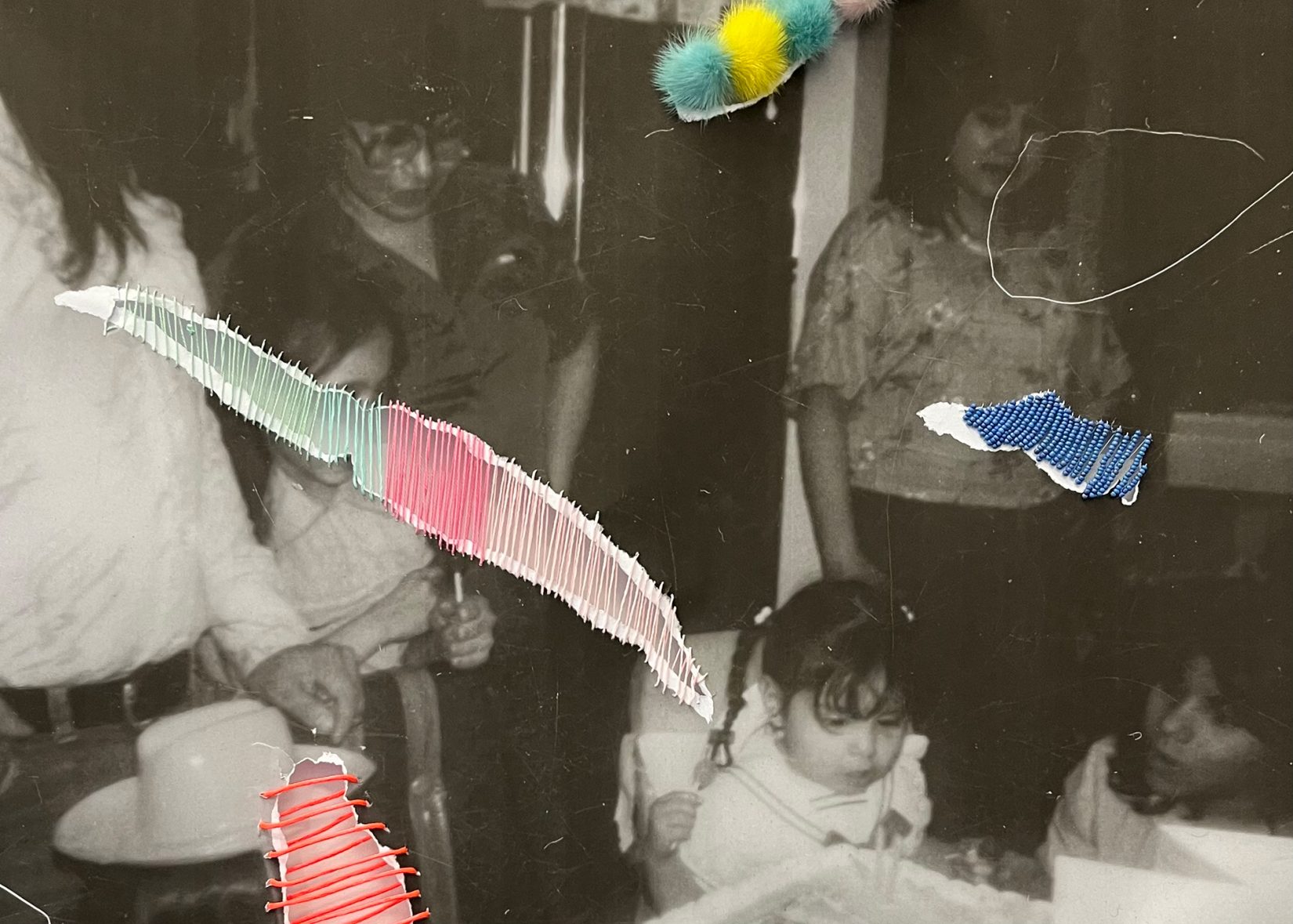 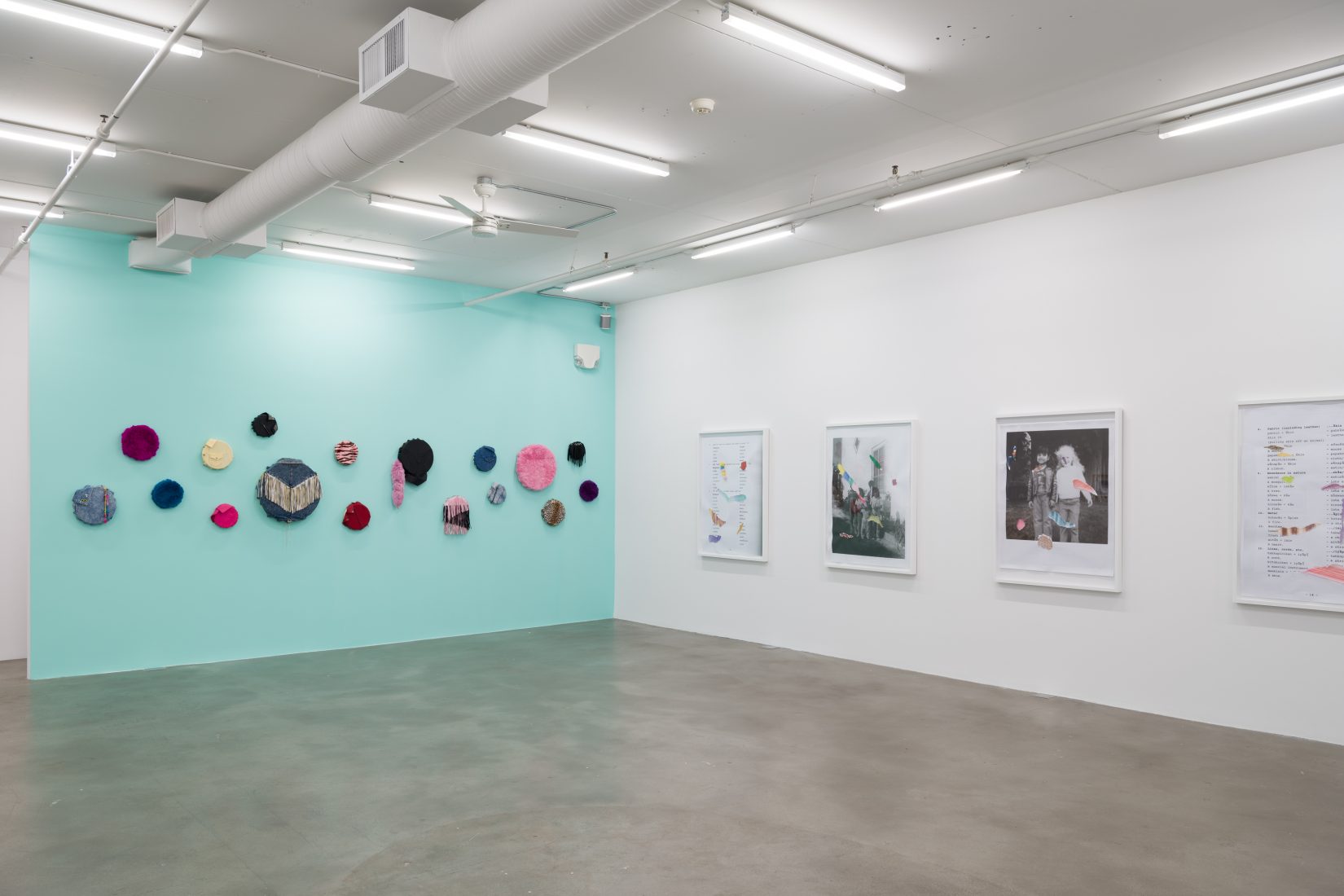 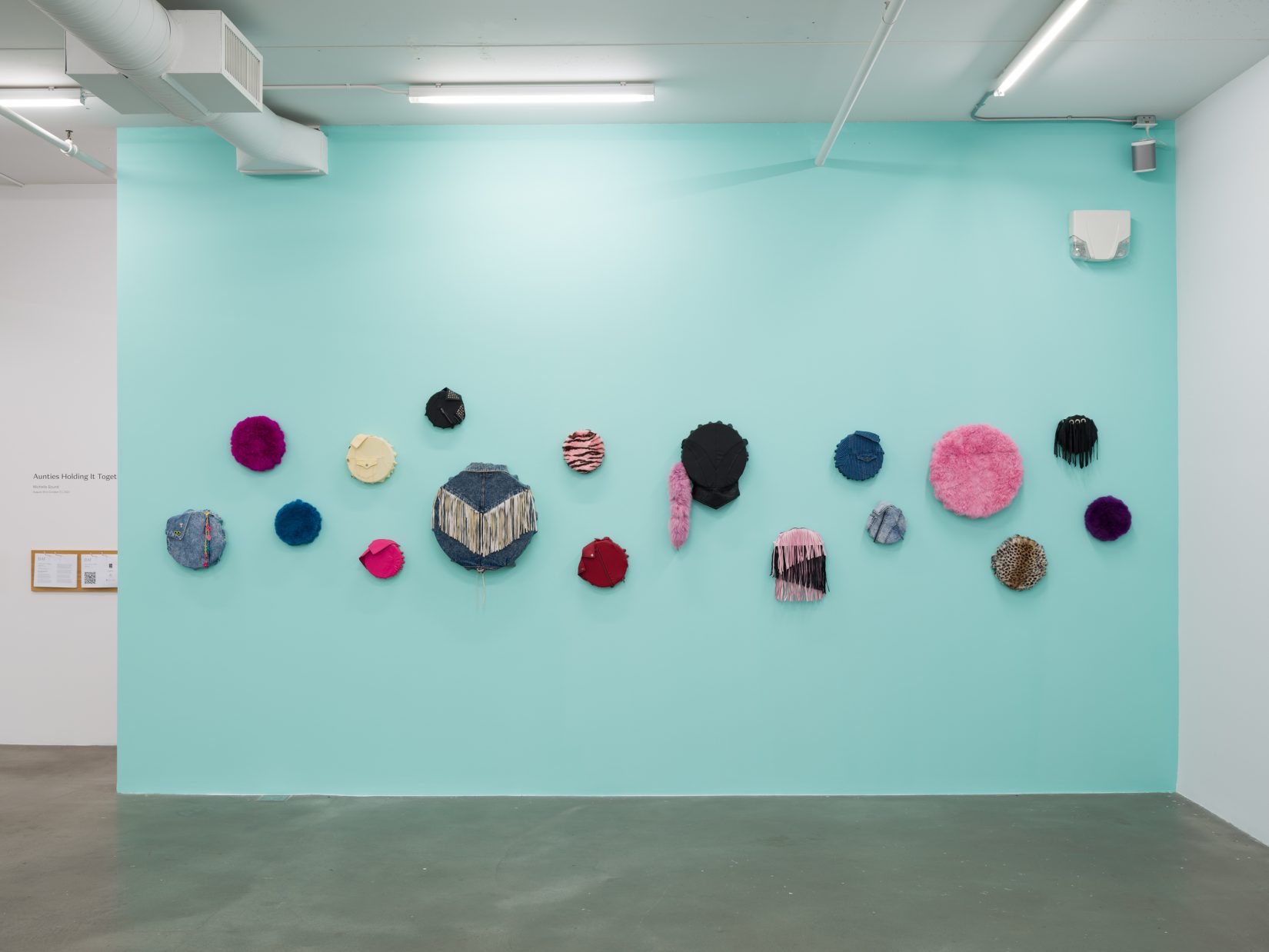 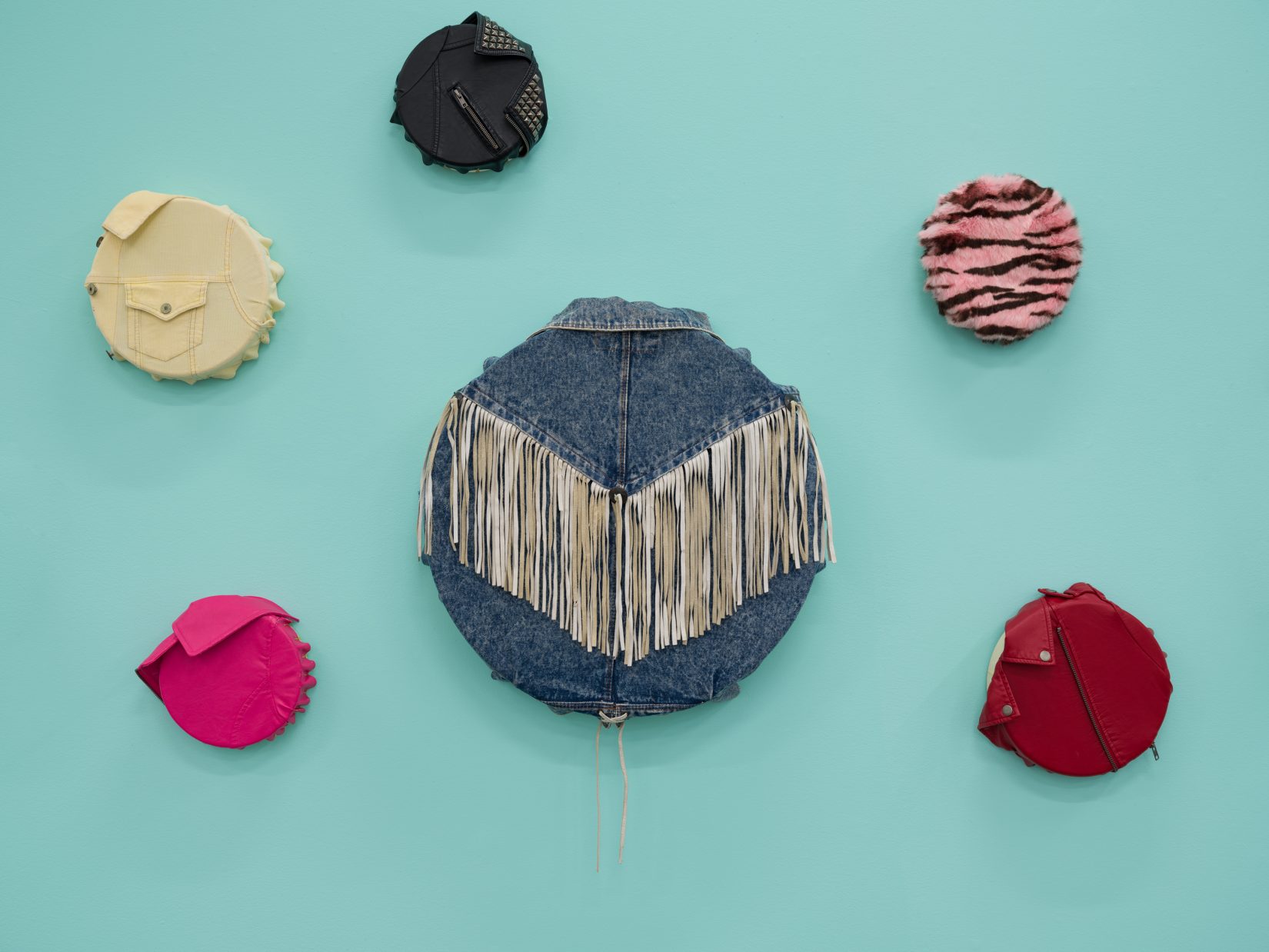 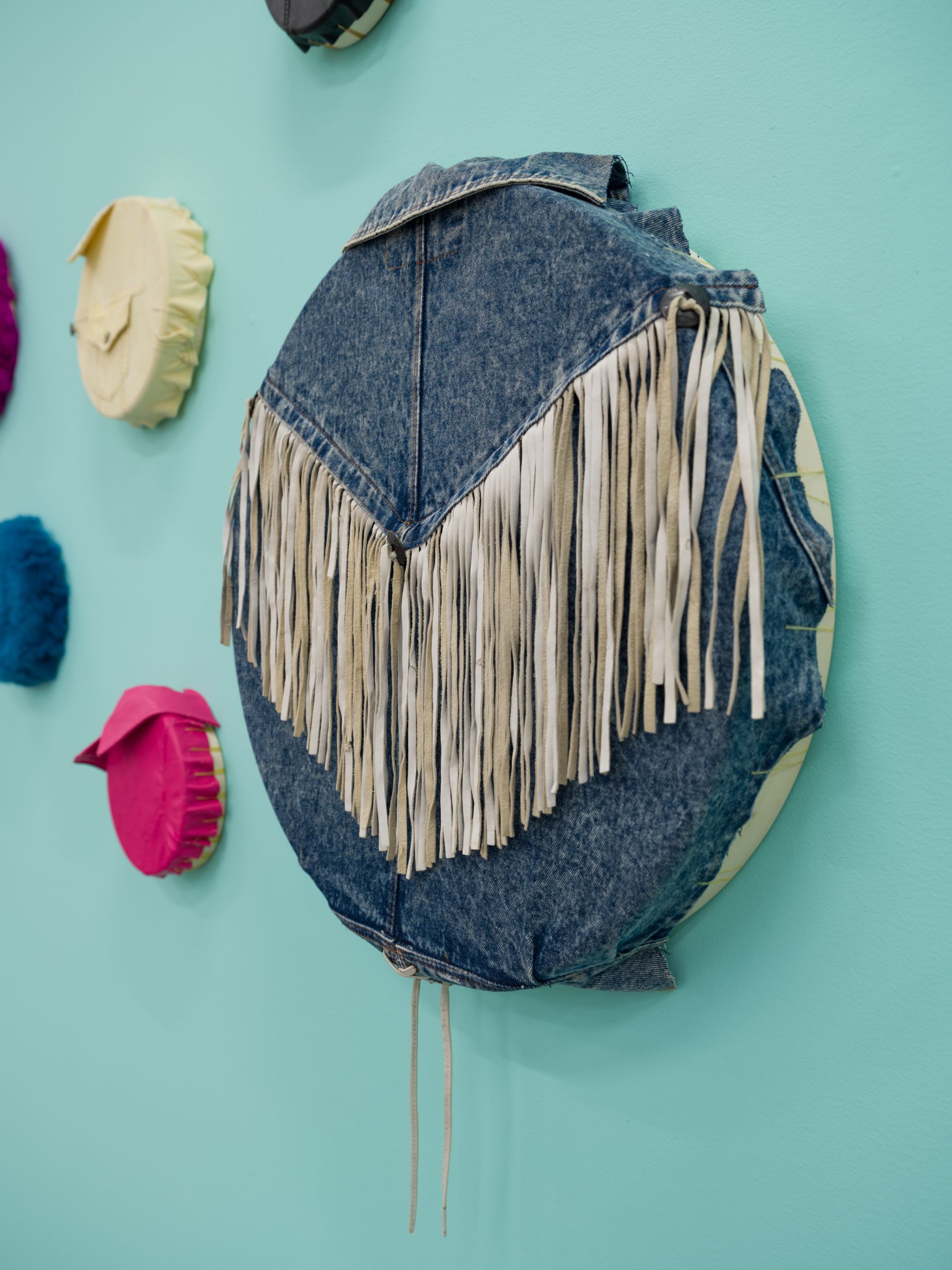 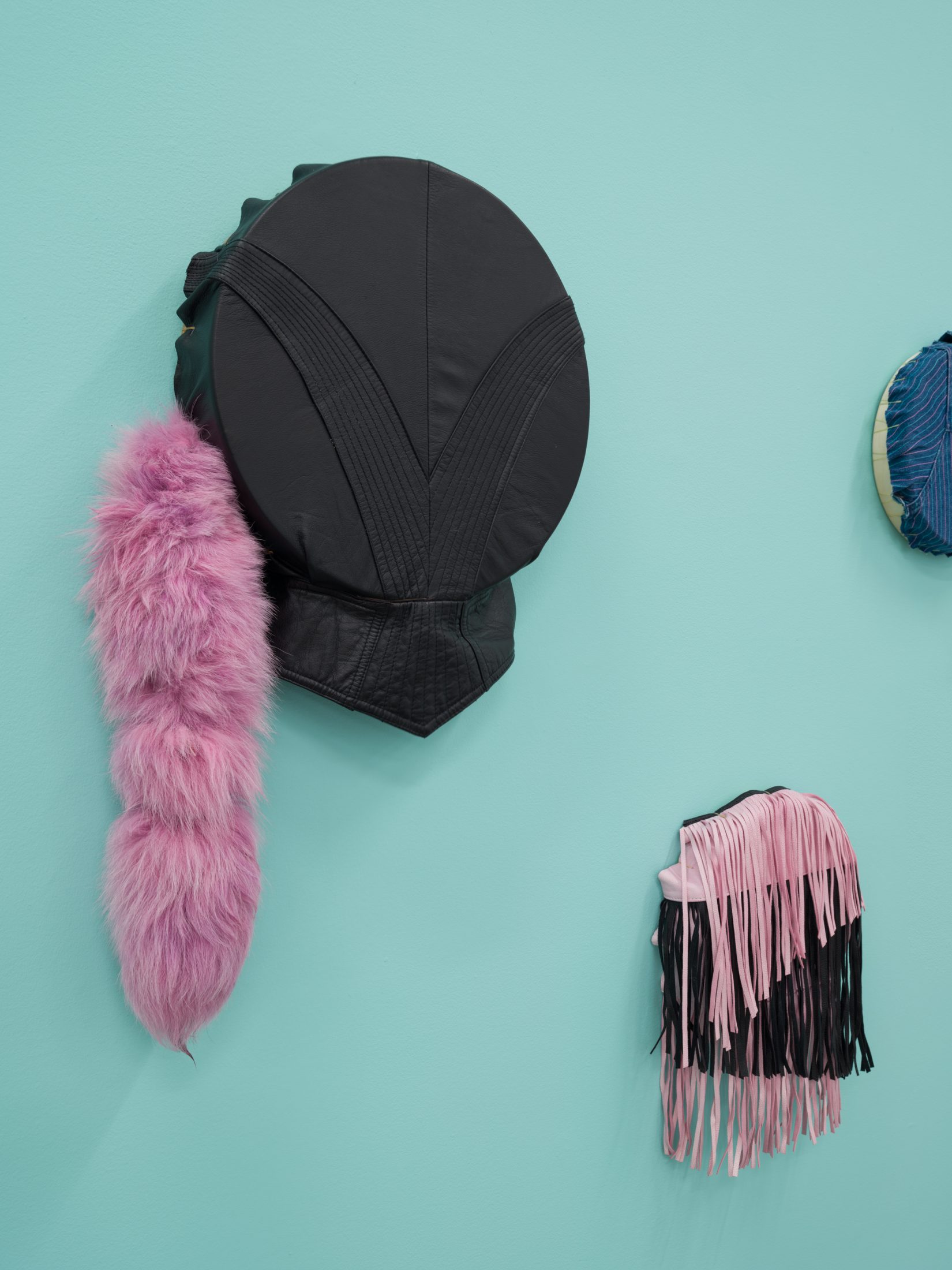 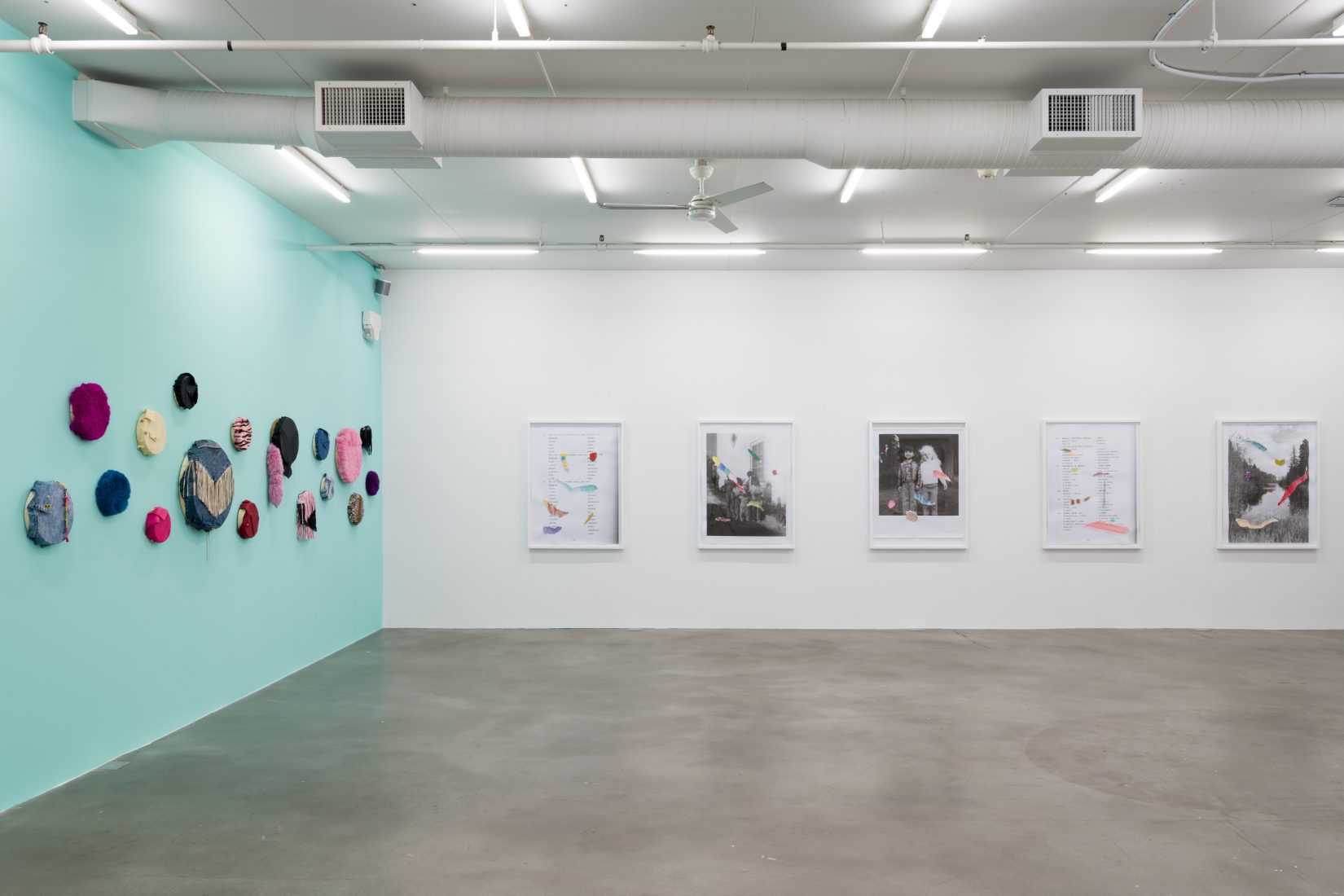 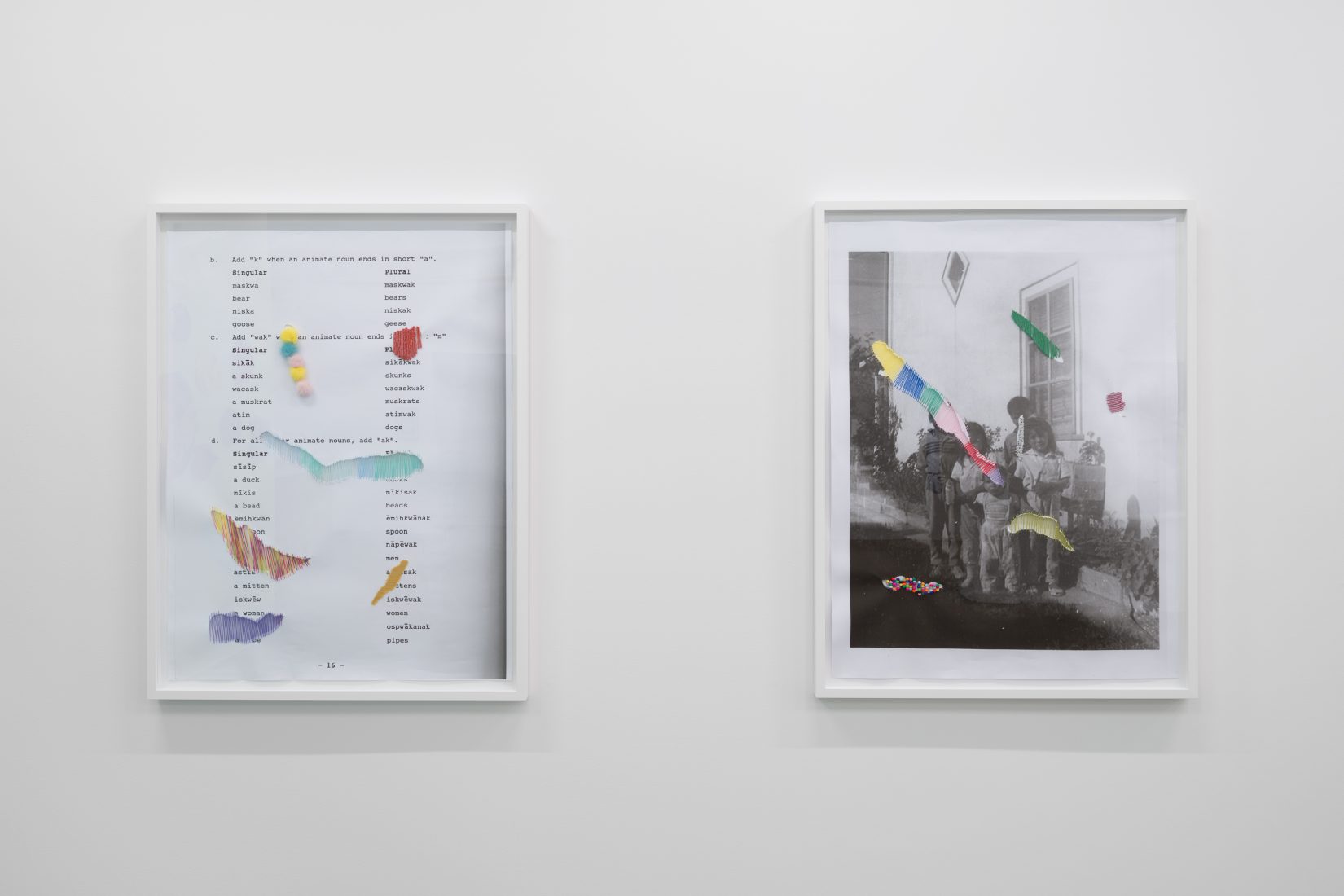 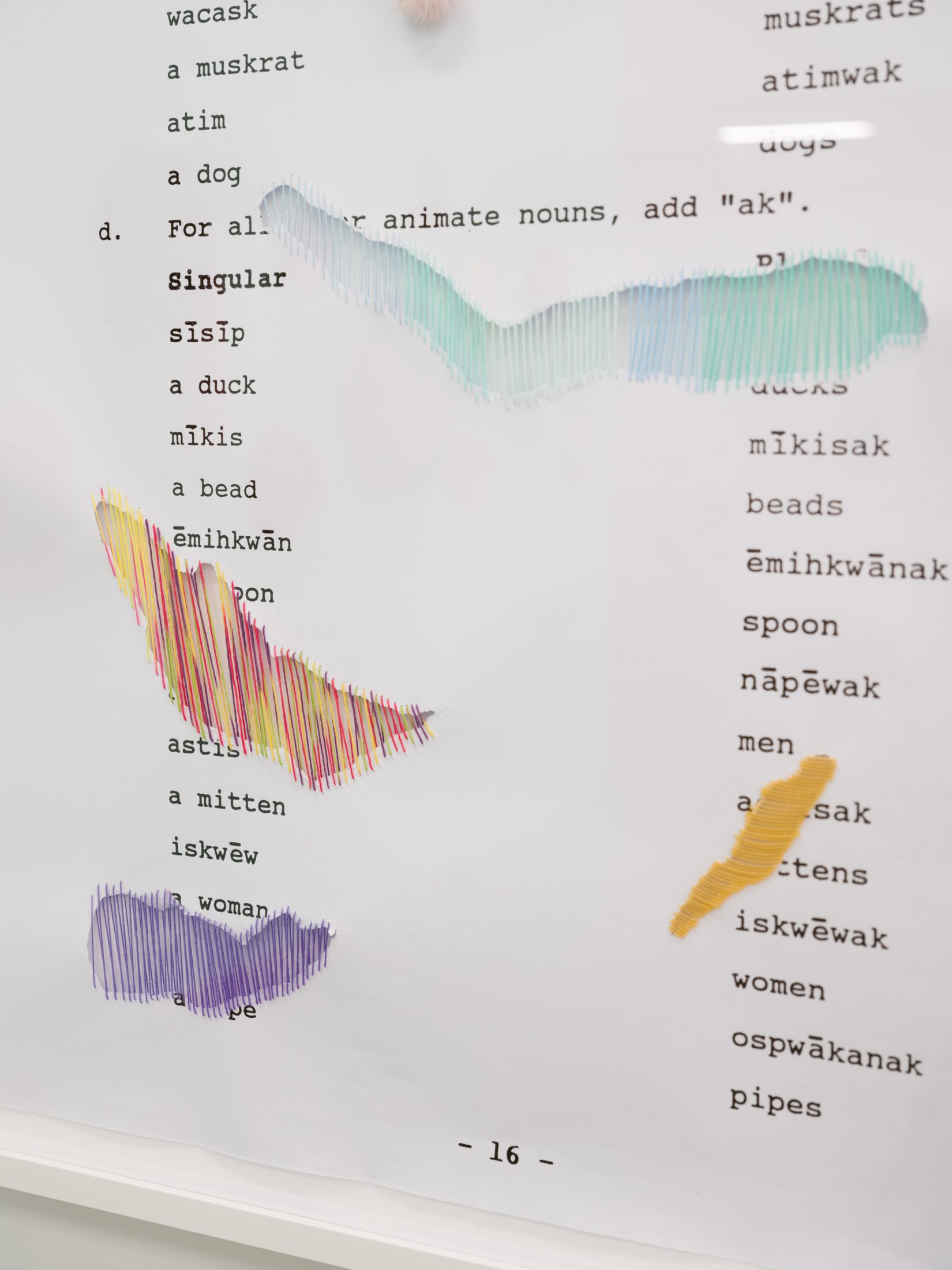 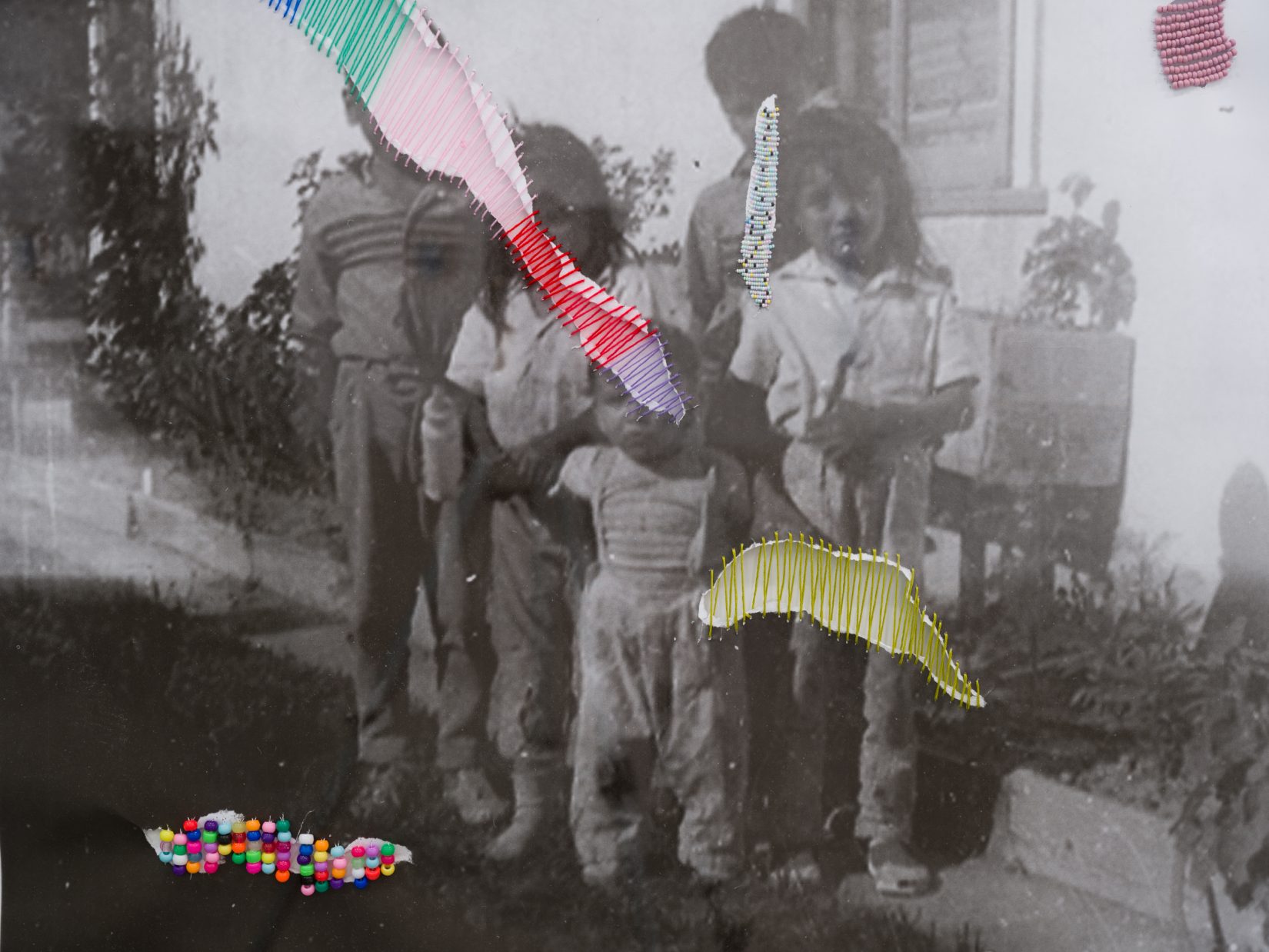 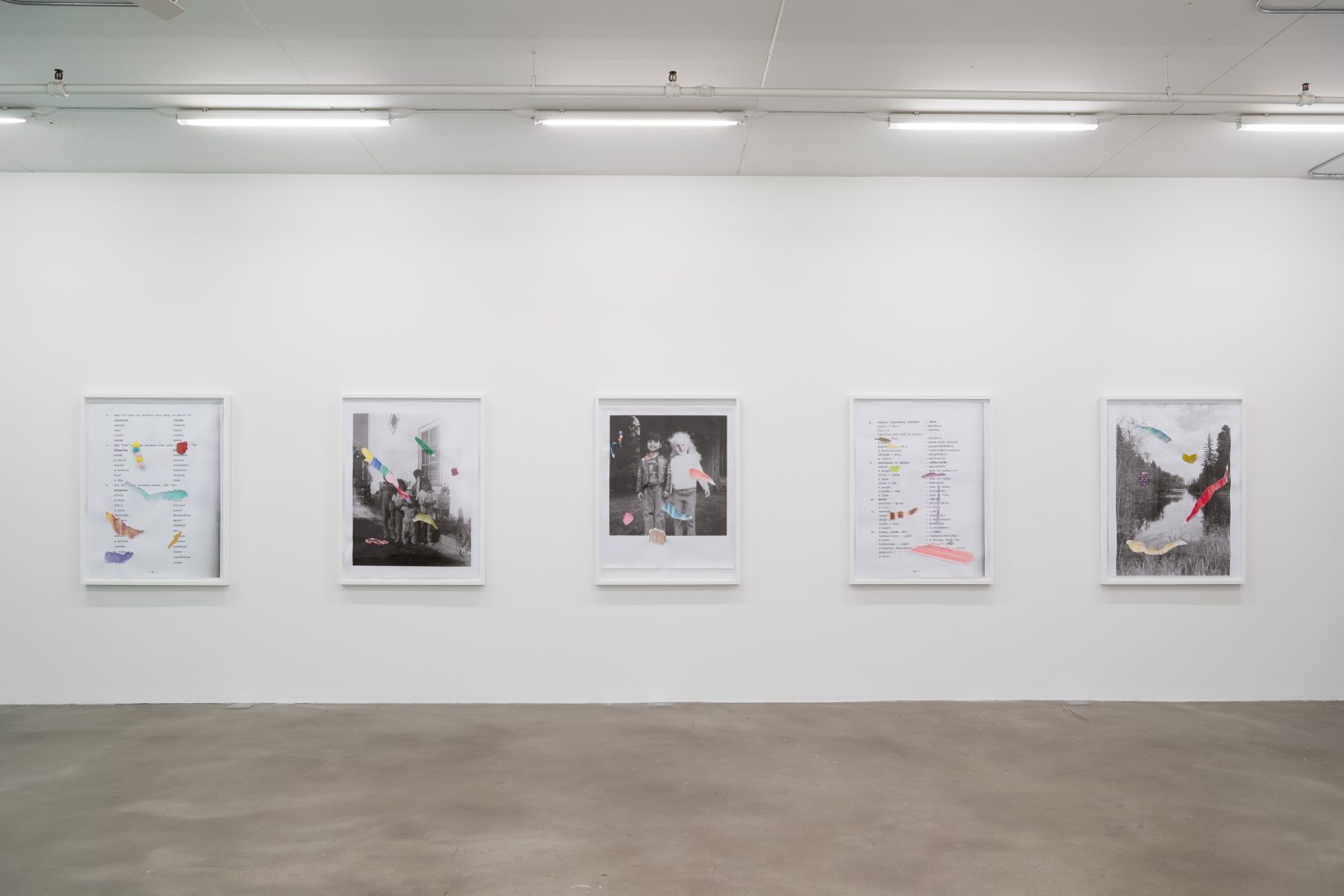 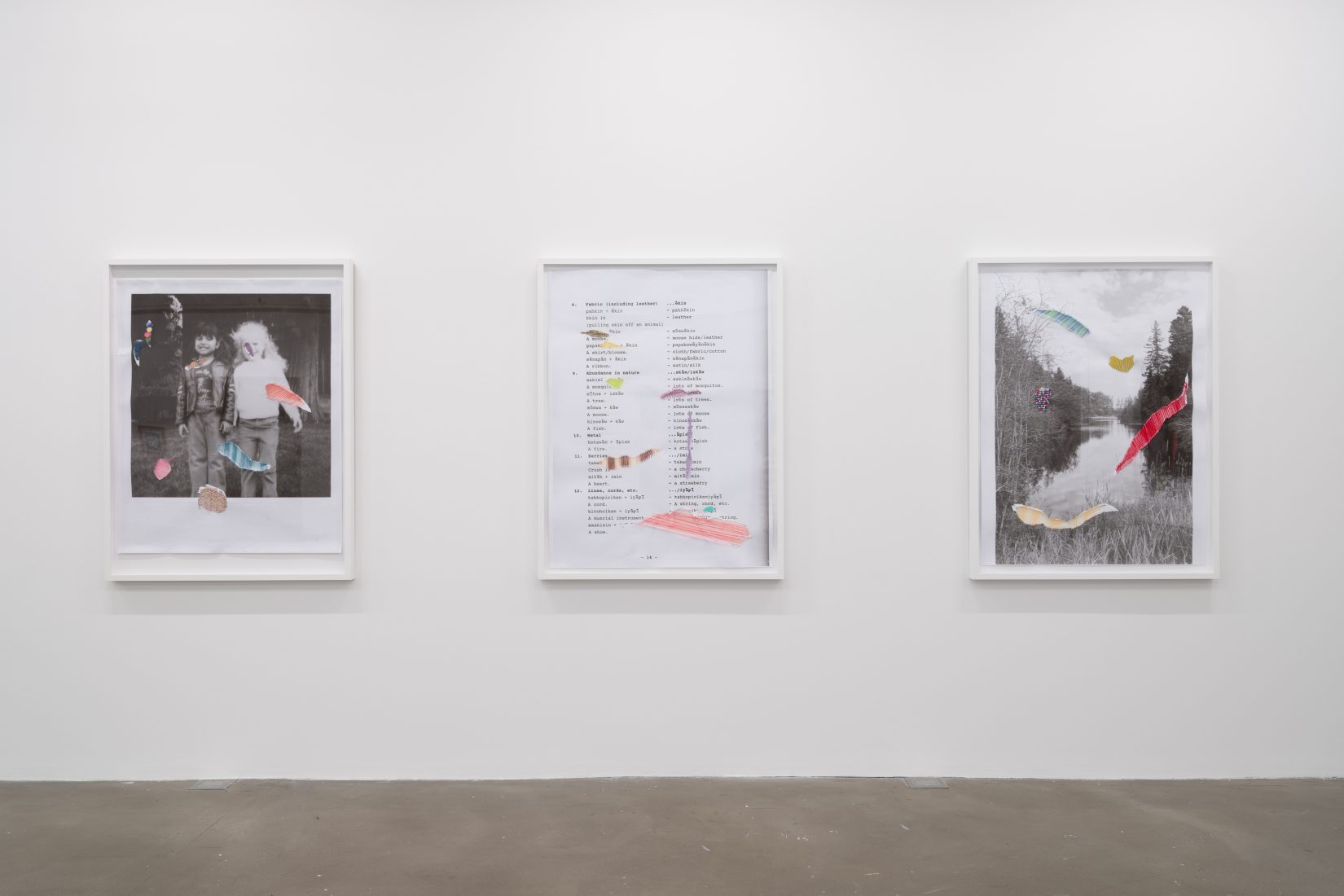 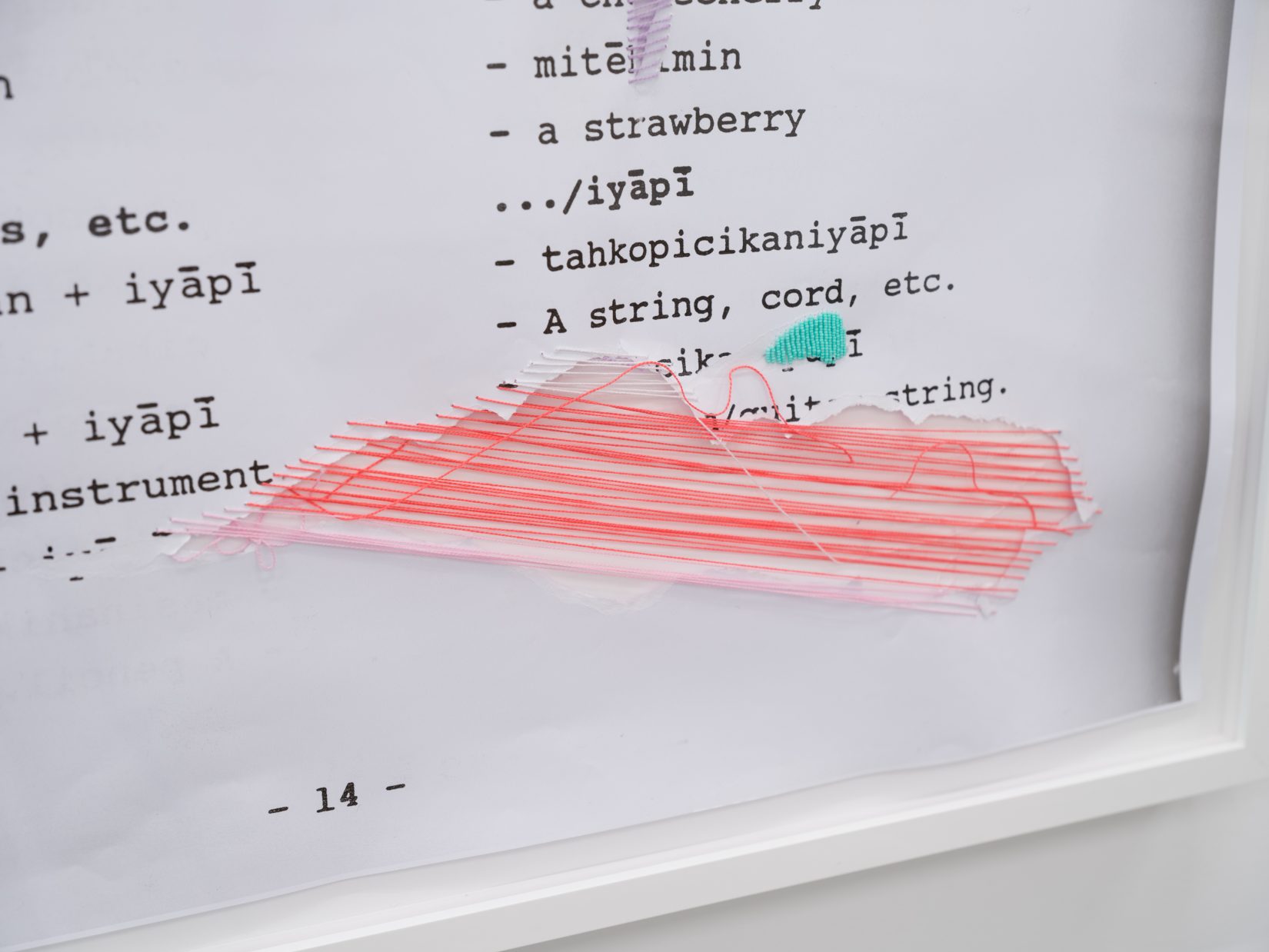 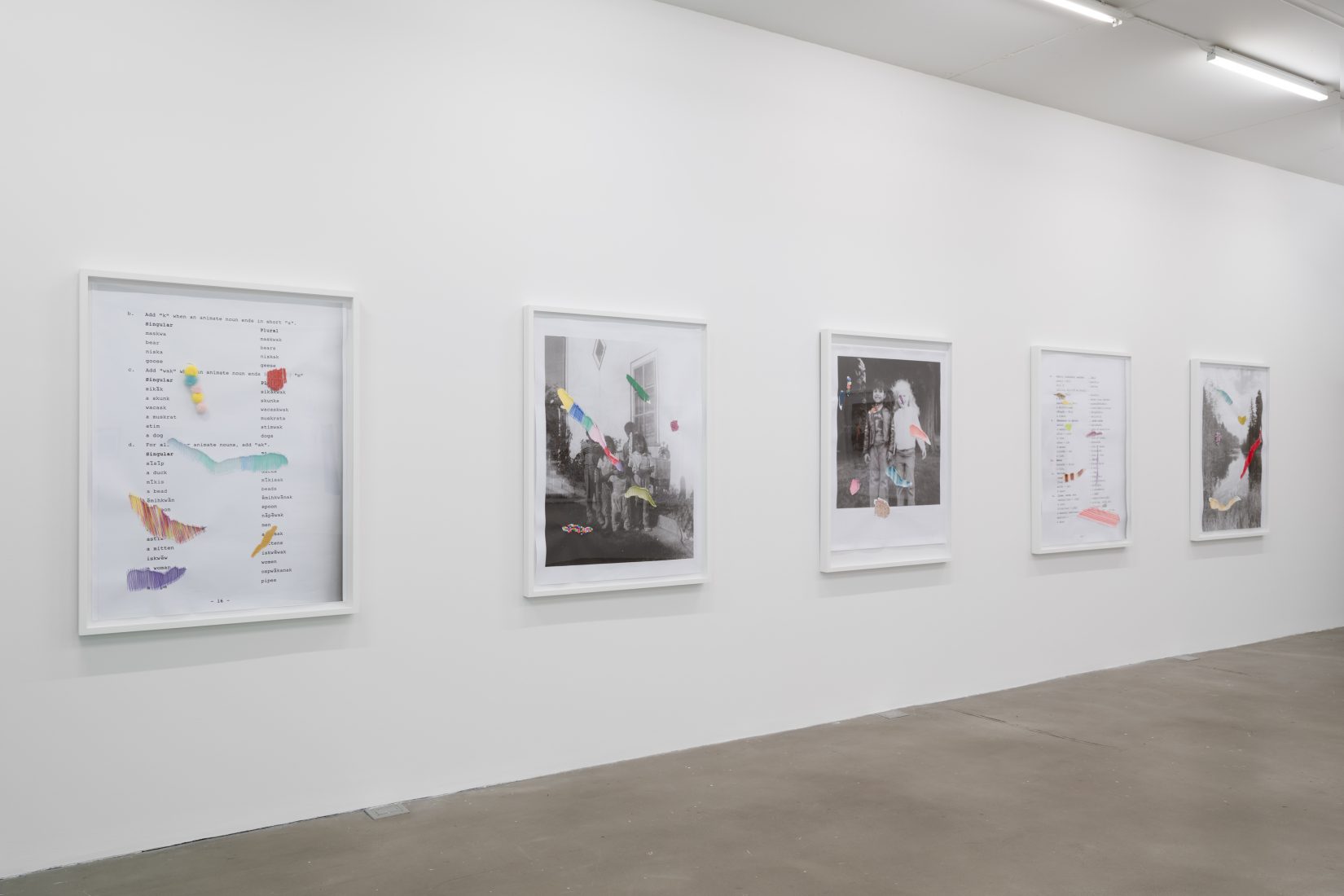 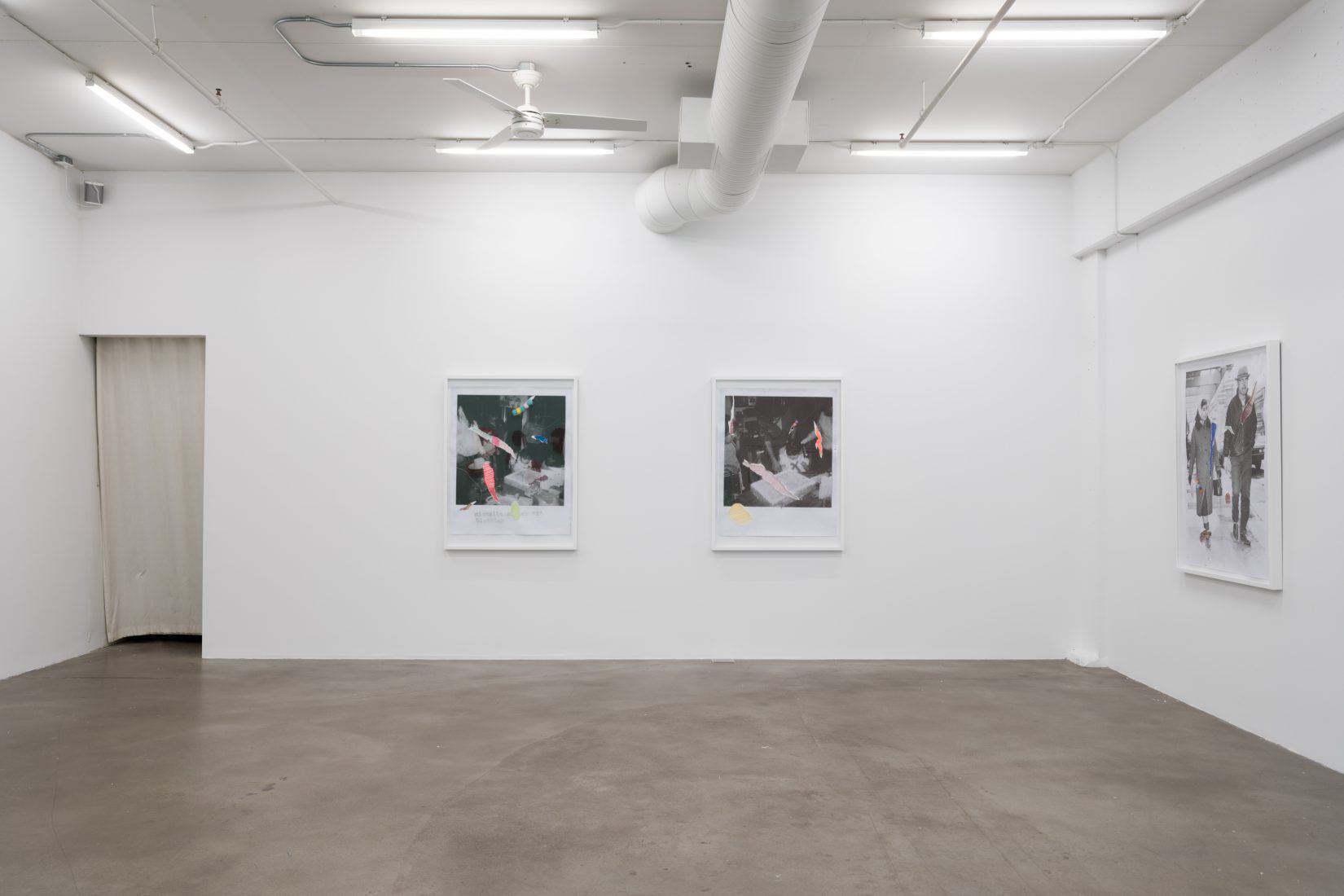 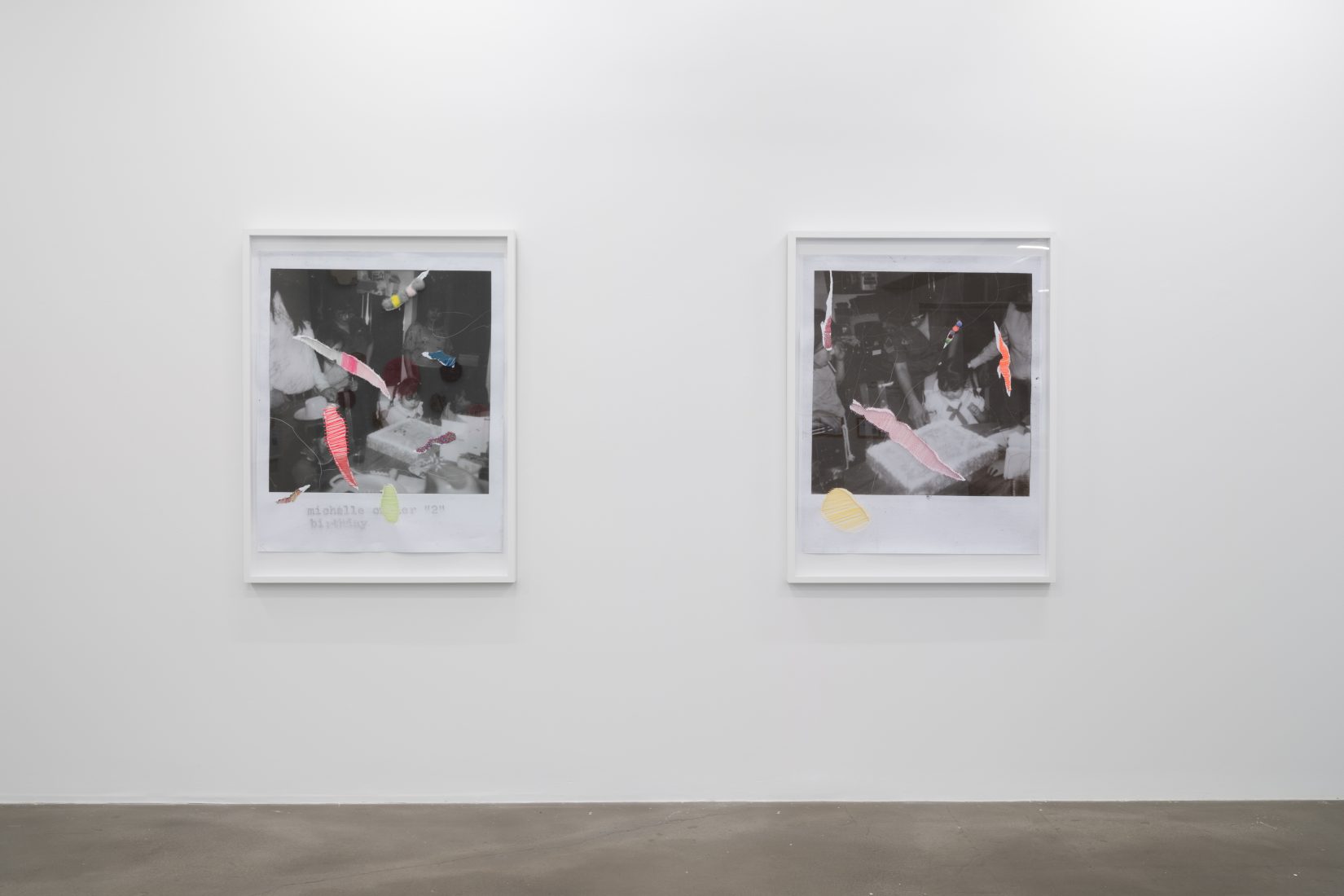 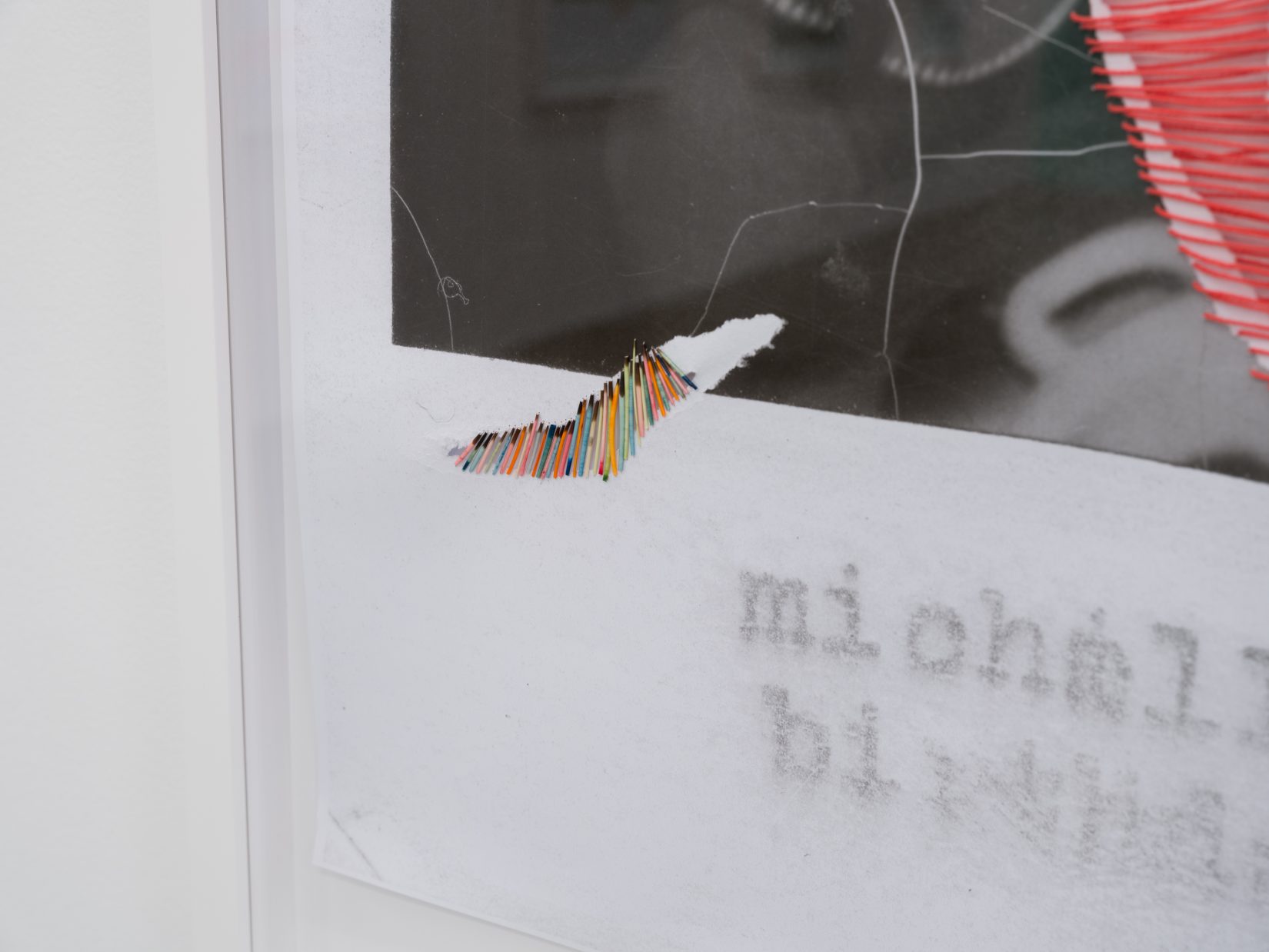 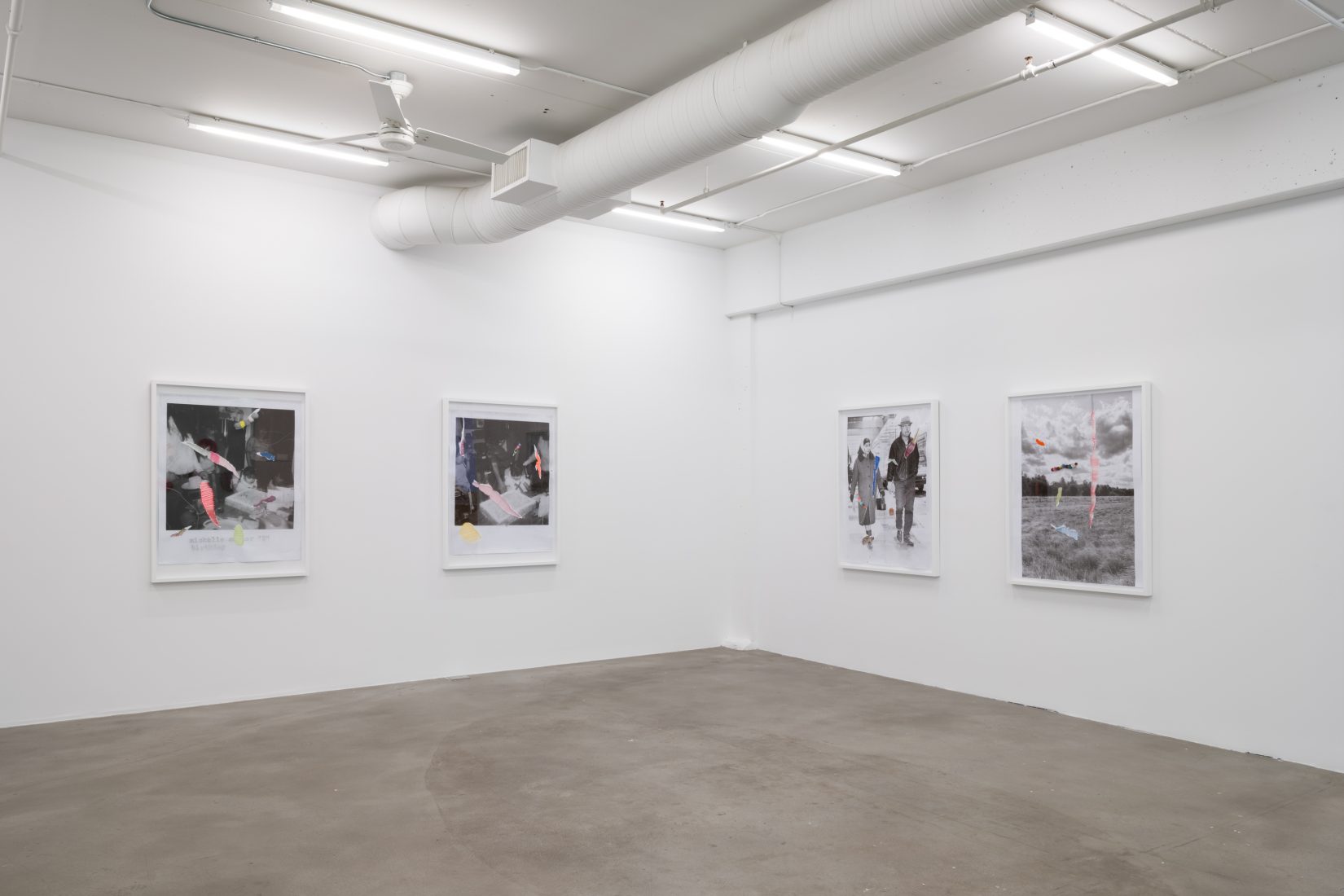 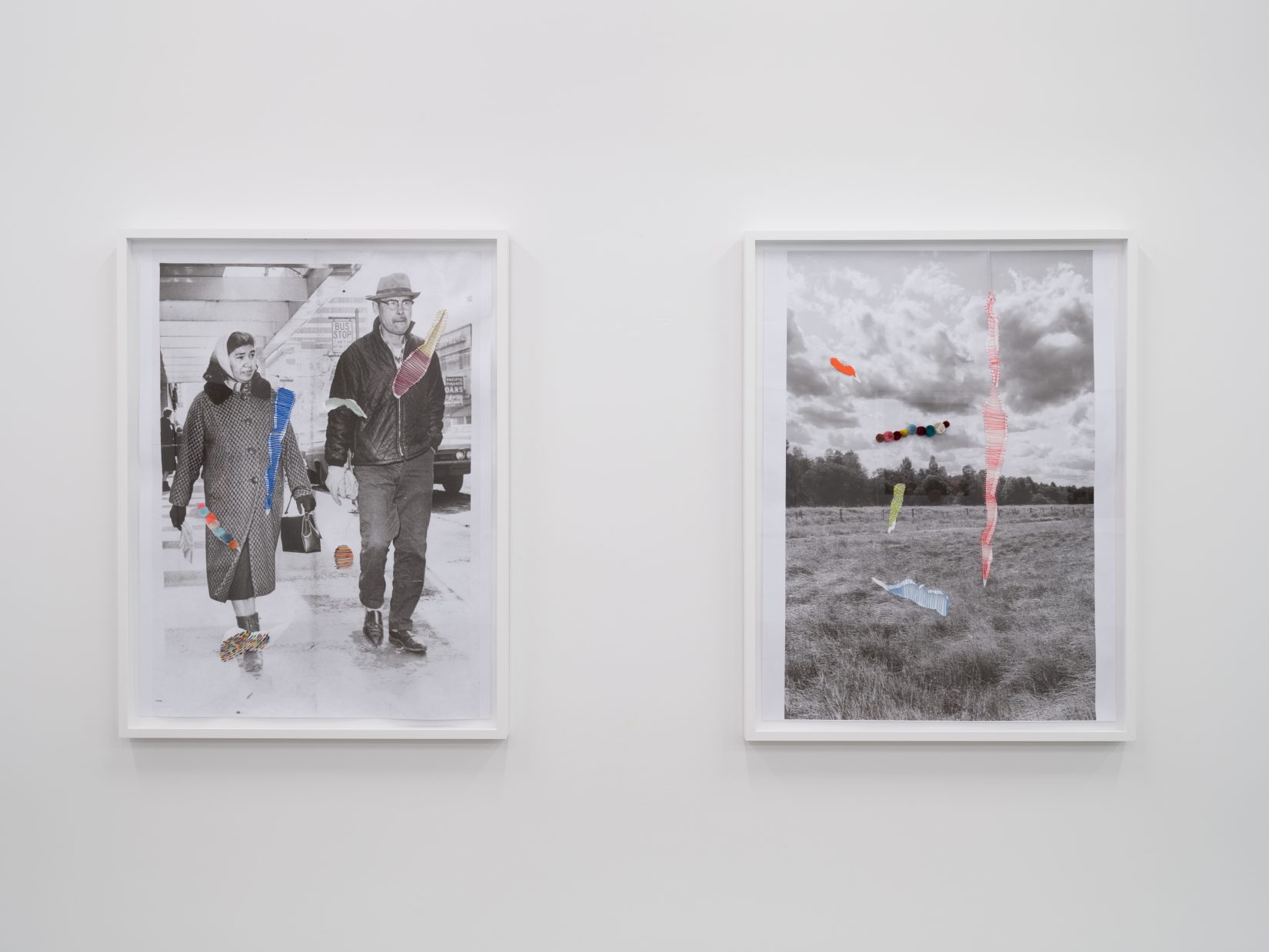 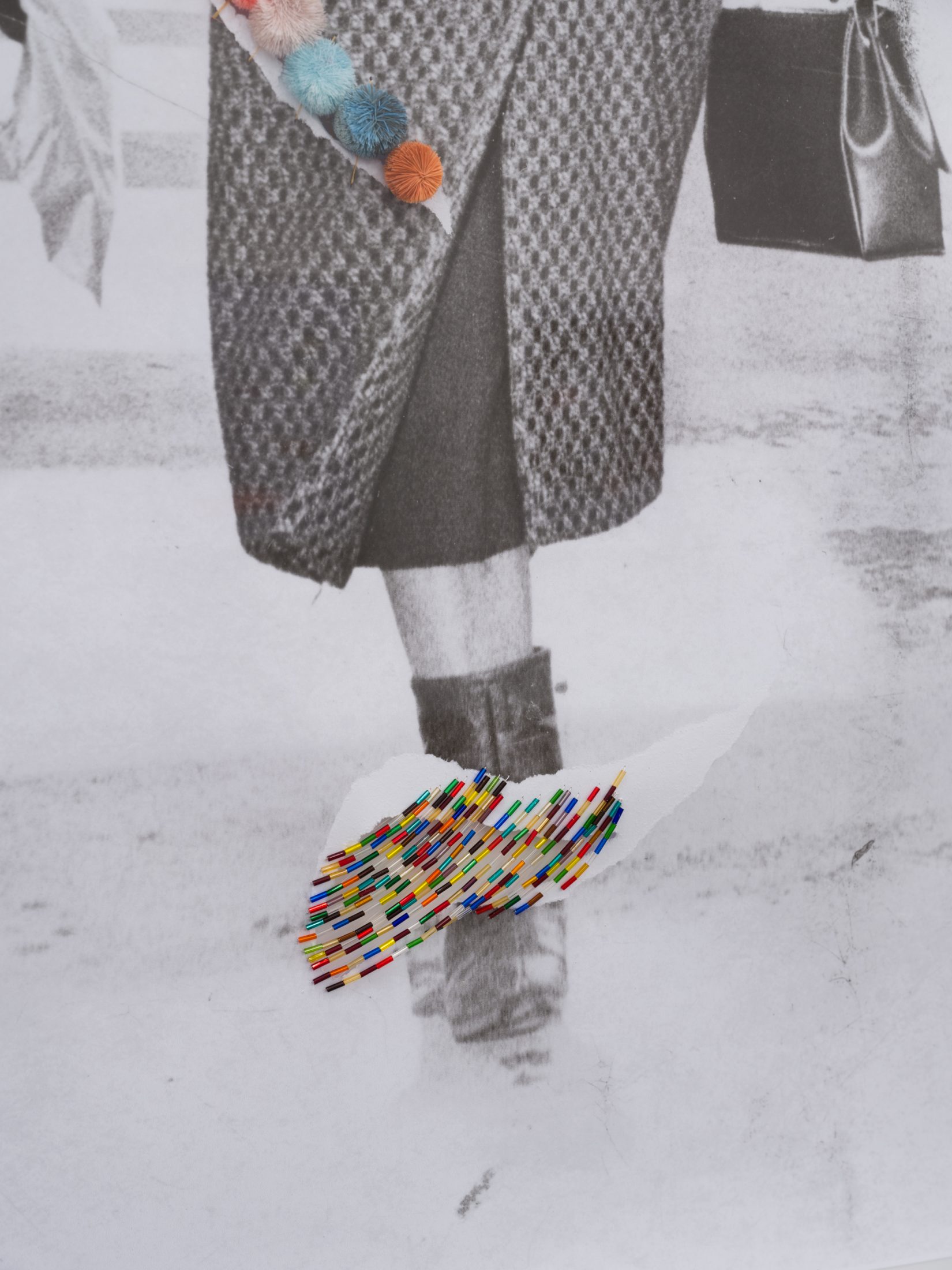 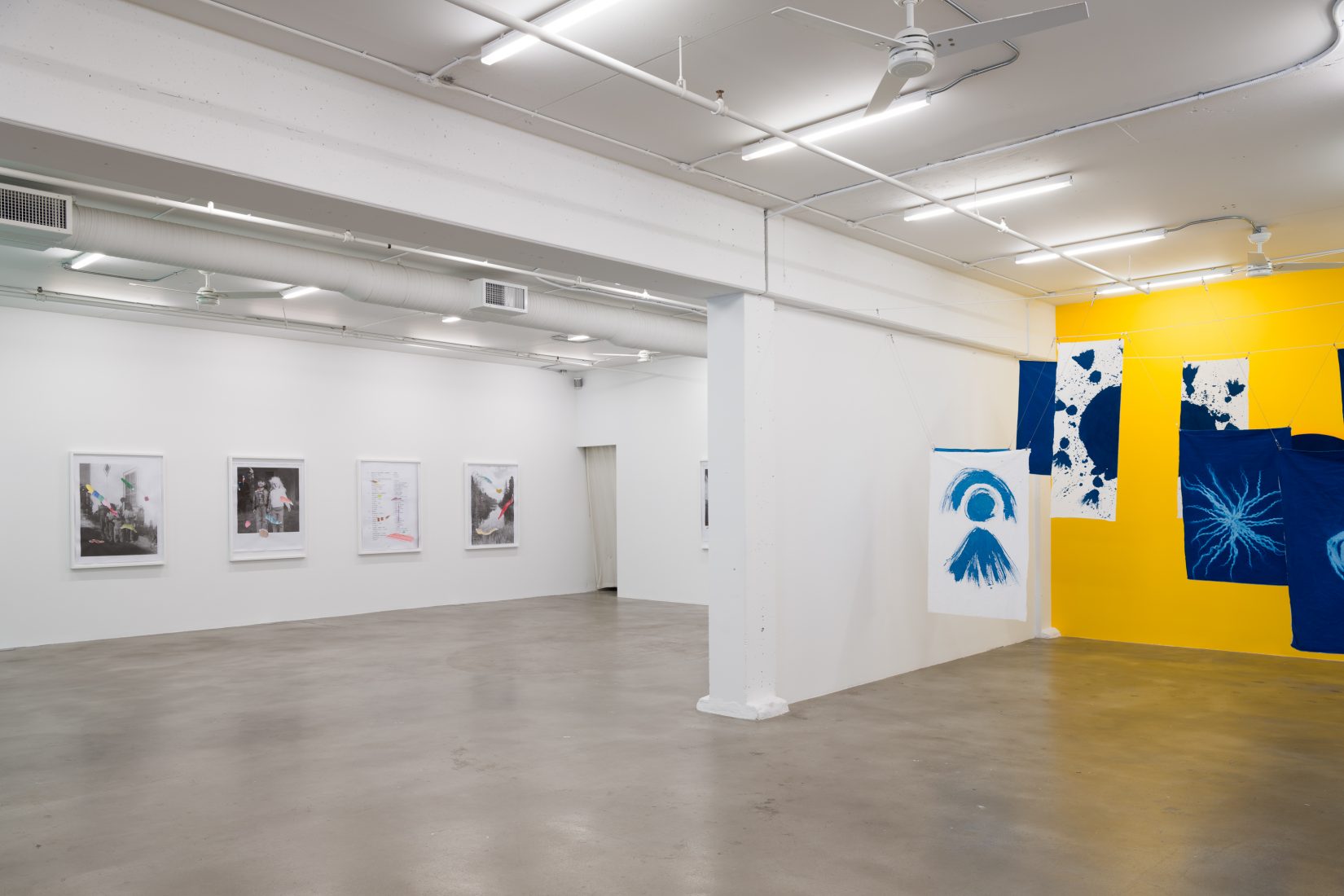 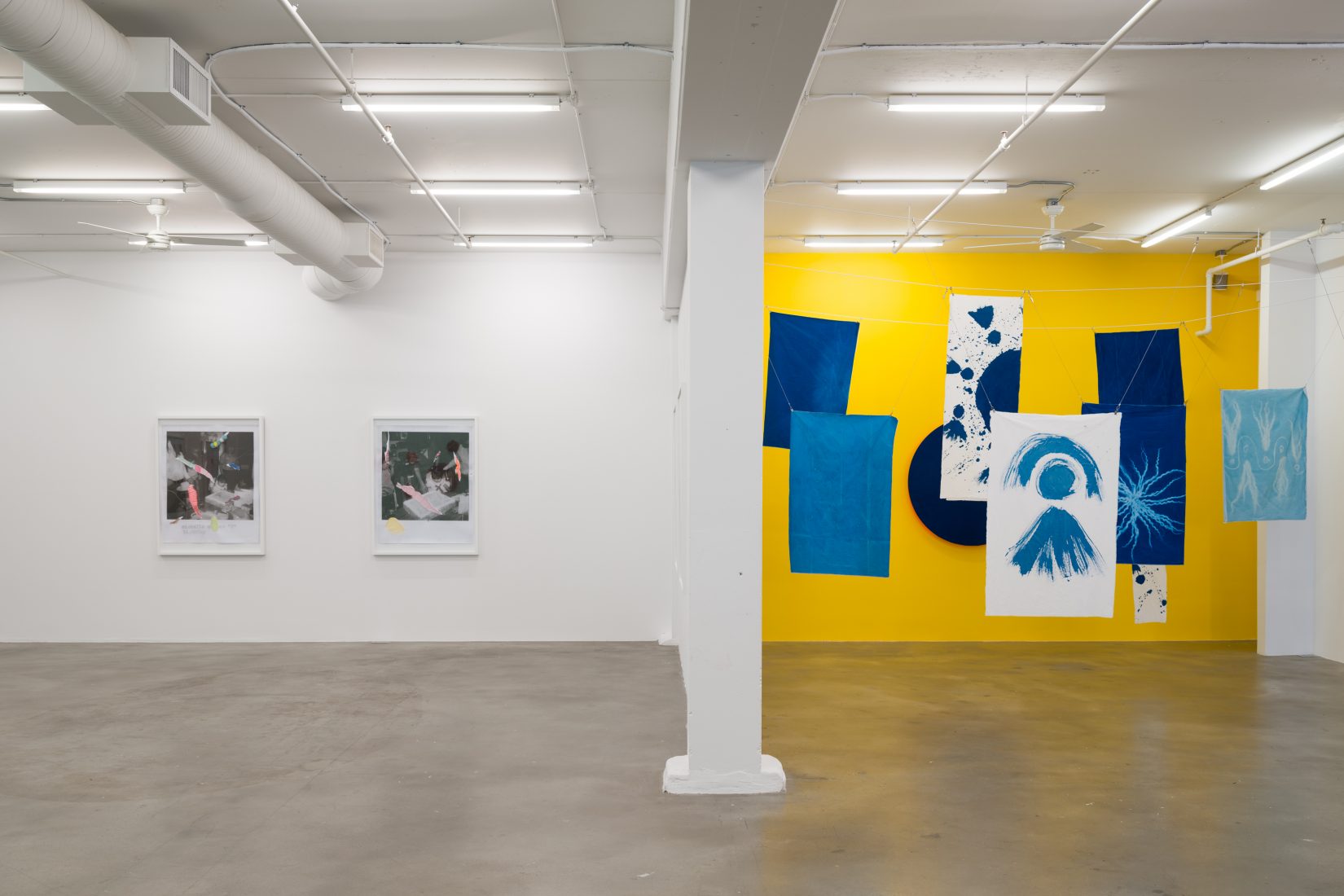 We are all citizens of the long twentieth century. It never ended for NDNs. I’m interested in methodological approaches to the study of the colonial past that imbue Indigenous peoples in the present with futurity. Michelle Sound’s Holding It Together demonstrates a way of attending to the past that doesn’t result in self-destruction.

Yes, history endures; yes, we are still living out the terror of the long twentieth century—the traumas of settlement, reservization, residential schooling, child abductions, and so forth. Sound’s work takes up these traumas as objects of analysis. She writes, “These images contain loss, grief, longing, and memory… The images are ripped to show the colonial violence that my family and other Indigenous families have experienced.” In Holding It Together, ancestral territory is also a wound; old family photographs, though seemingly ordinary, depict the subtleties of colonial dispossession. A Cree dictionary is also an inventory of loss.

To view Sound’s work is to inhabit paradox. We have to think paradoxically. Which is to say that we recognize that sometimes our desires are impossible or laden with difficulty but we desire all the same. It also means that we have to believe that it is possible to confront history’s atrocities and not be ruined in doing so.

Sound destroys her objects in order to repair them. I understand this approach, I feel it in my body. Maybe it is an NDN coping mechanism, a way of reckoning with grief and holding onto the present even if we know that the present is a dead end.

The torn photographs are stitched with colorful threads and embroidered with beads and caribou tufts. Set against the greyscale photographs, the materials, which meld traditional and contemporary techniques, evidence an aesthetics and practice of care. A torn photograph is a synonym for the past as well as the present. Some nights my body feels like a torn photograph—a very NDN feeling. Sound knows that our grief is both private and public. She sanctions our grief. In doing so, the space of the gallery becomes a new emotional landscape.

Holding It Together also amounts to an alternative history of feeling, an entire archive of NDN feeling, to modify Ann Cvetkovich’s phrase. We have to deposit our feelings somewhere; our bodies can only hold so much. Cvetkovich argues that “cultural texts [are] repositories of feelings and emotions” that situate us in a shared context.1 Sound’s exhibition places us in a larger affective world that runs counter to the miserable settler world we usually have to weather. We come together so that we can fall apart. Our NDN vulnerability isn’t subject to exploitation. To be an NDN in an art gallery is sometimes dehumanizing, because we have been treated as objects for so long. Sound’s series and art practice more broadly seem to be an antidote to or corrective for this experience of objectification. Like the photographs, we too are sites of both trauma and possibility. Like the photographs, we are being held together, threaded to one another. Ultimately, Sound is an emotional historian of the future.

Aunties Holding It Together