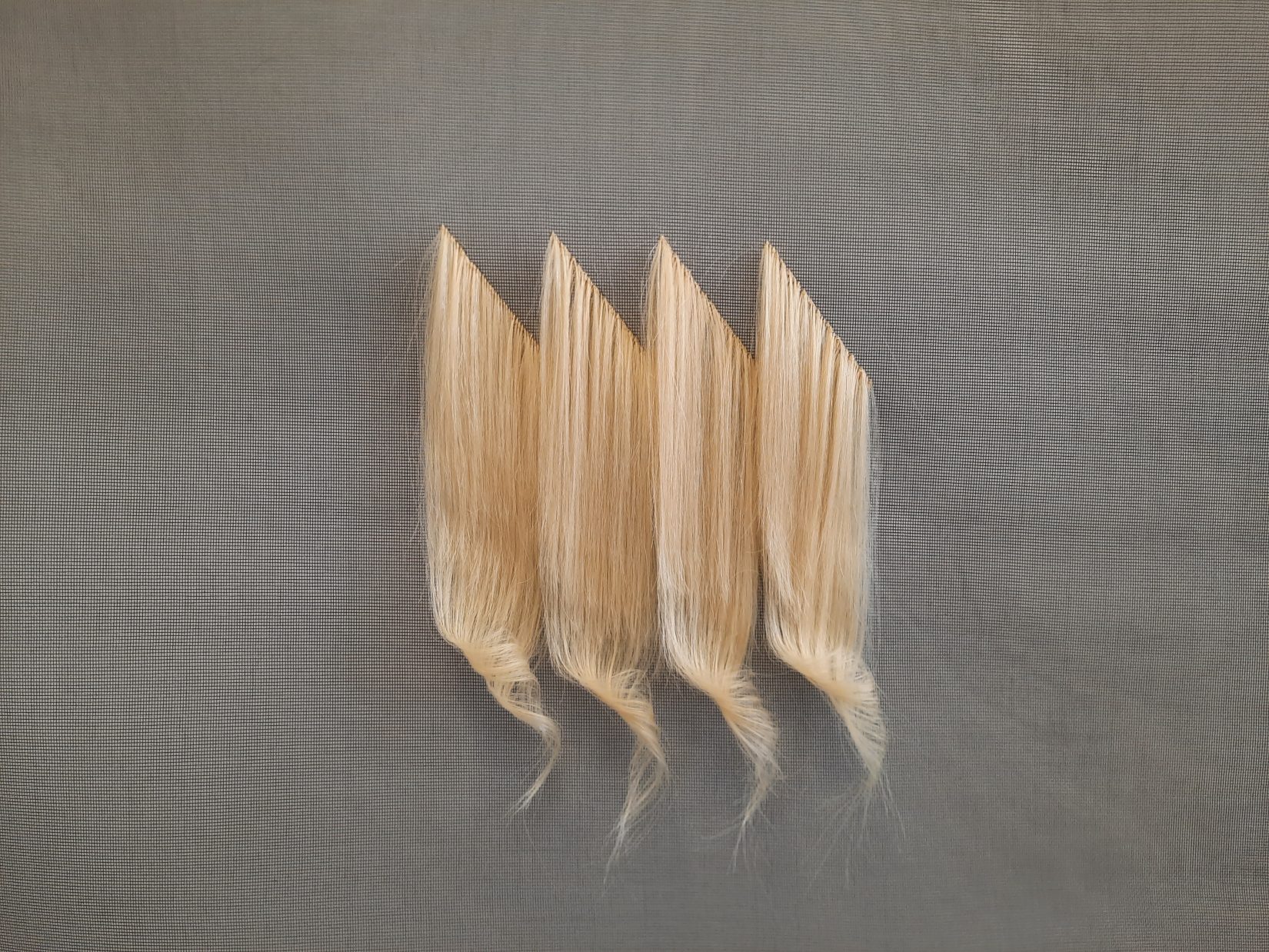 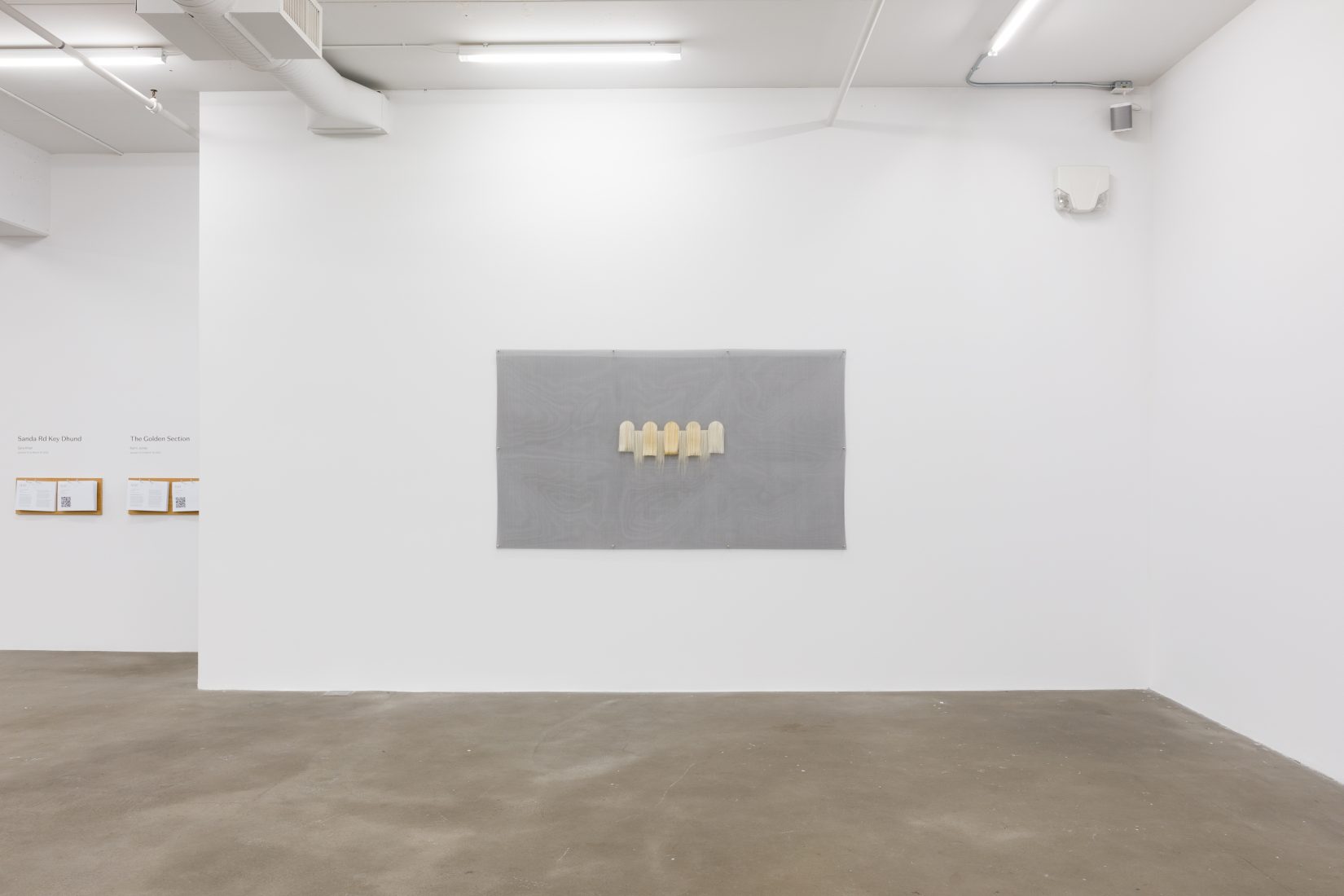 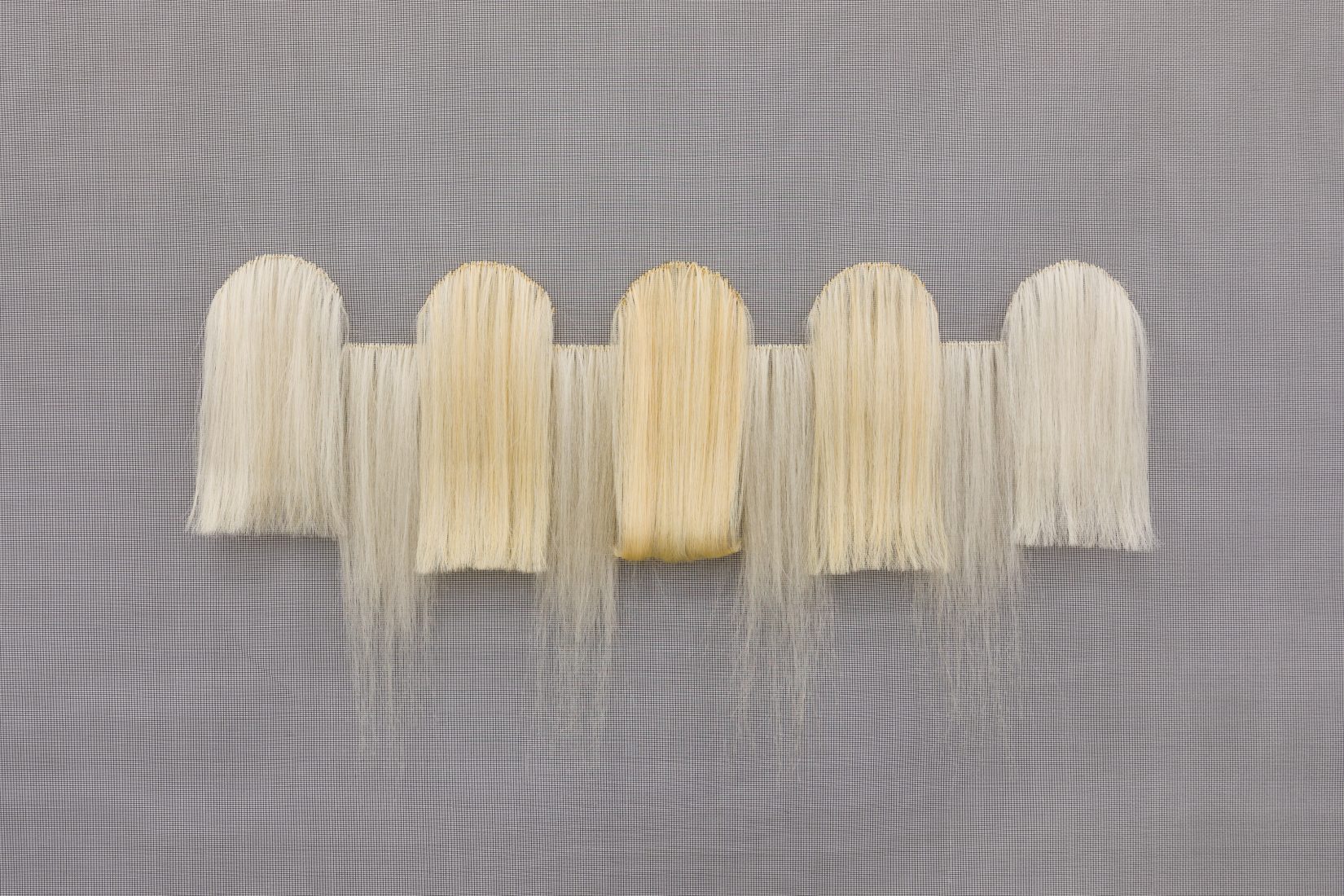 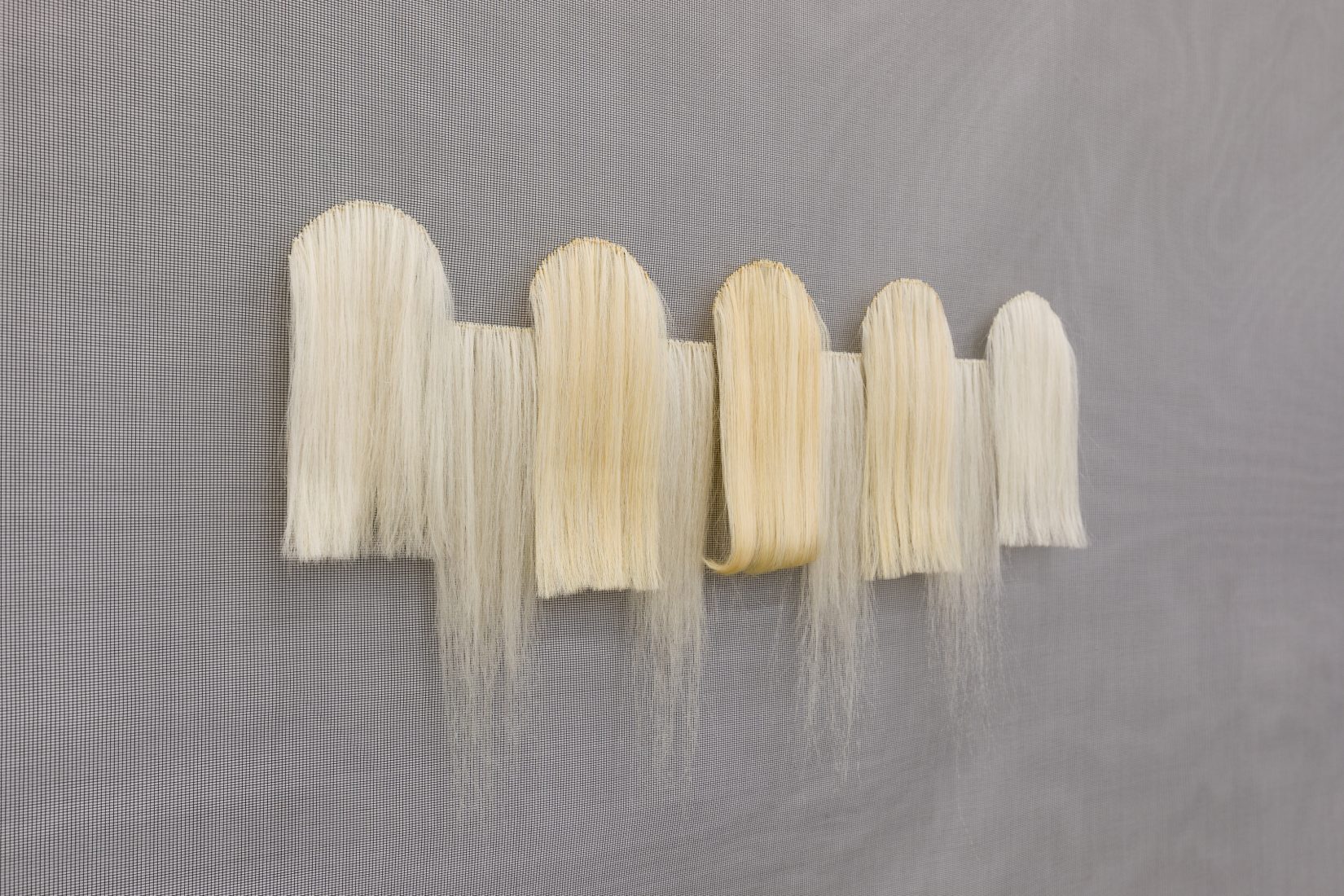 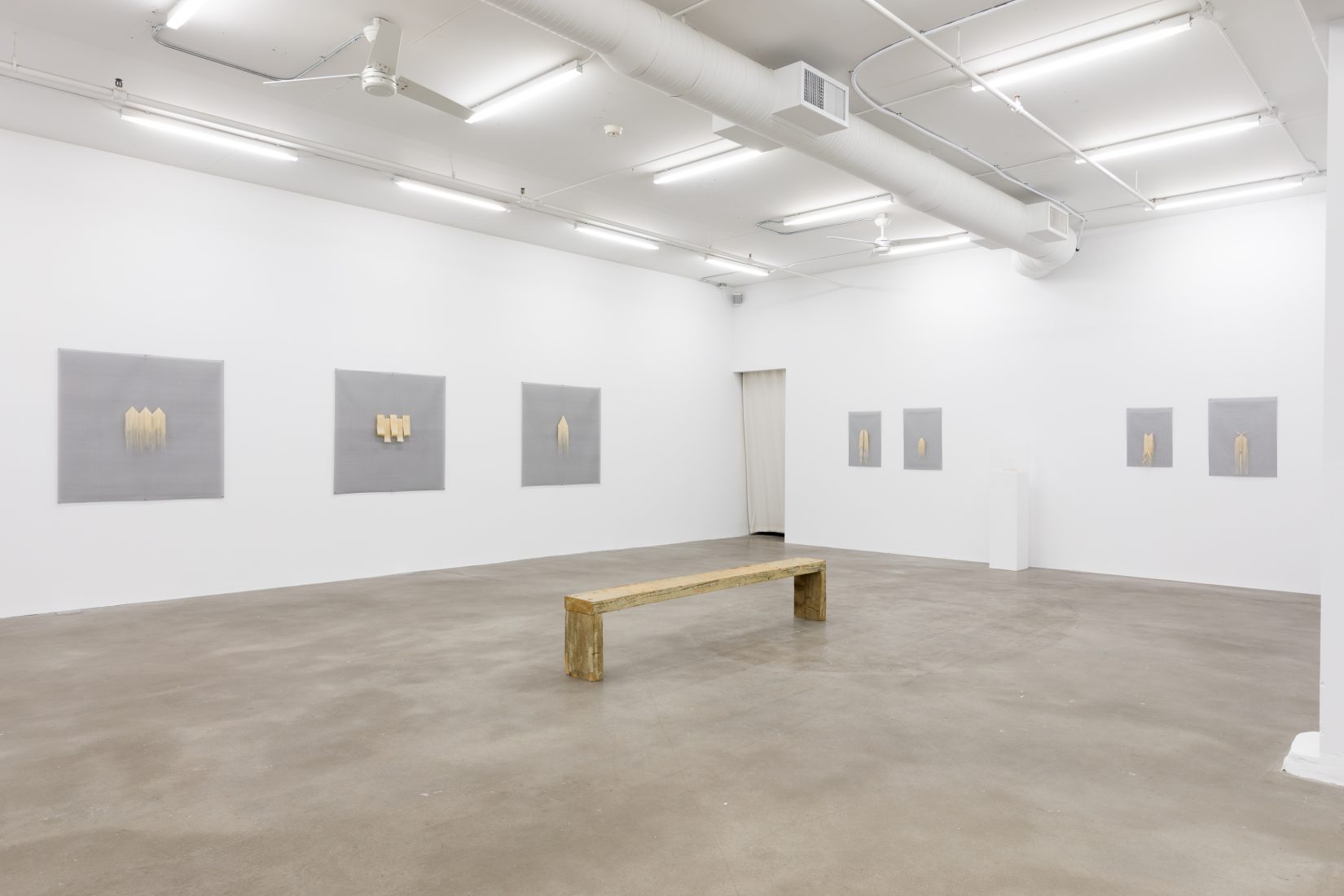 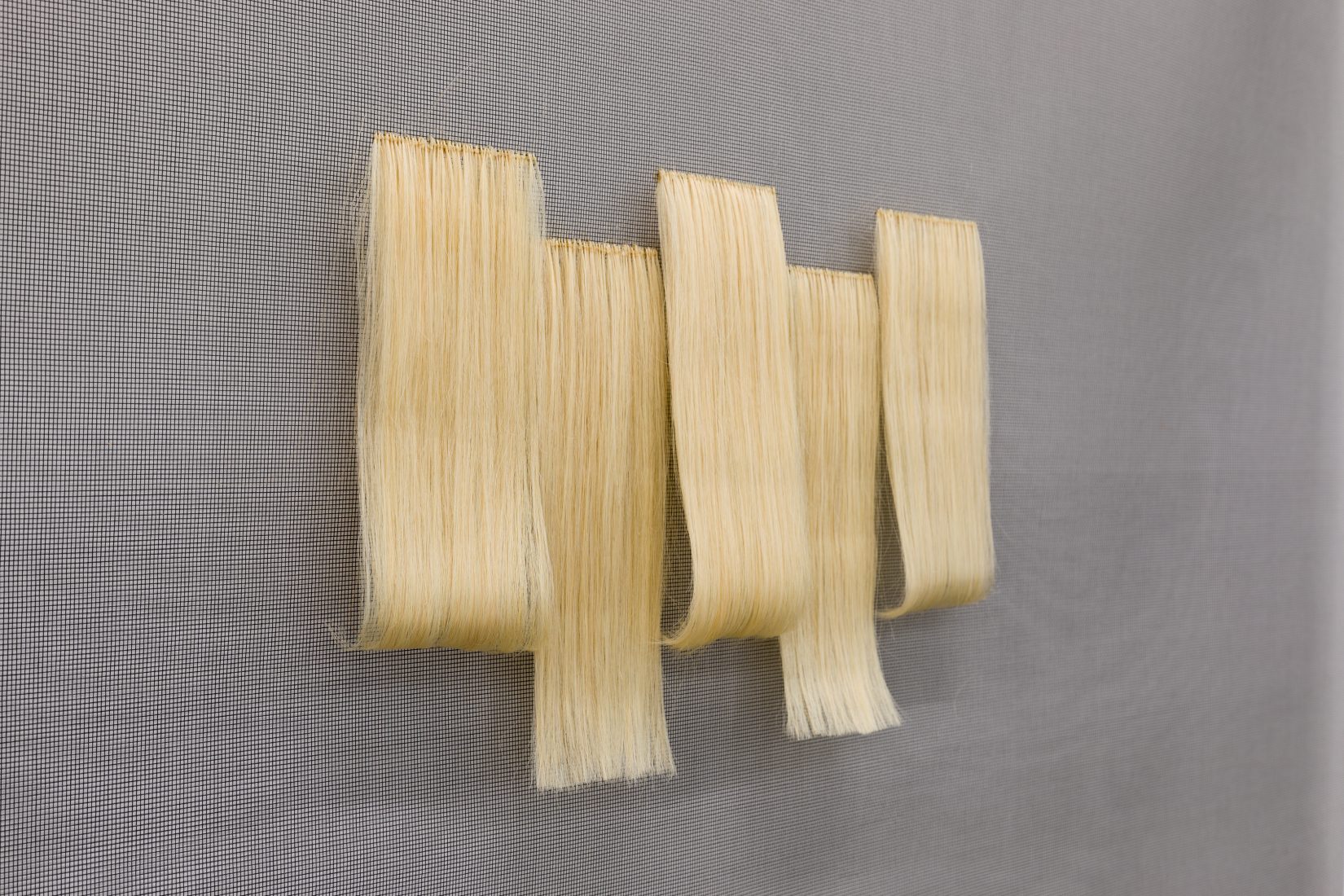 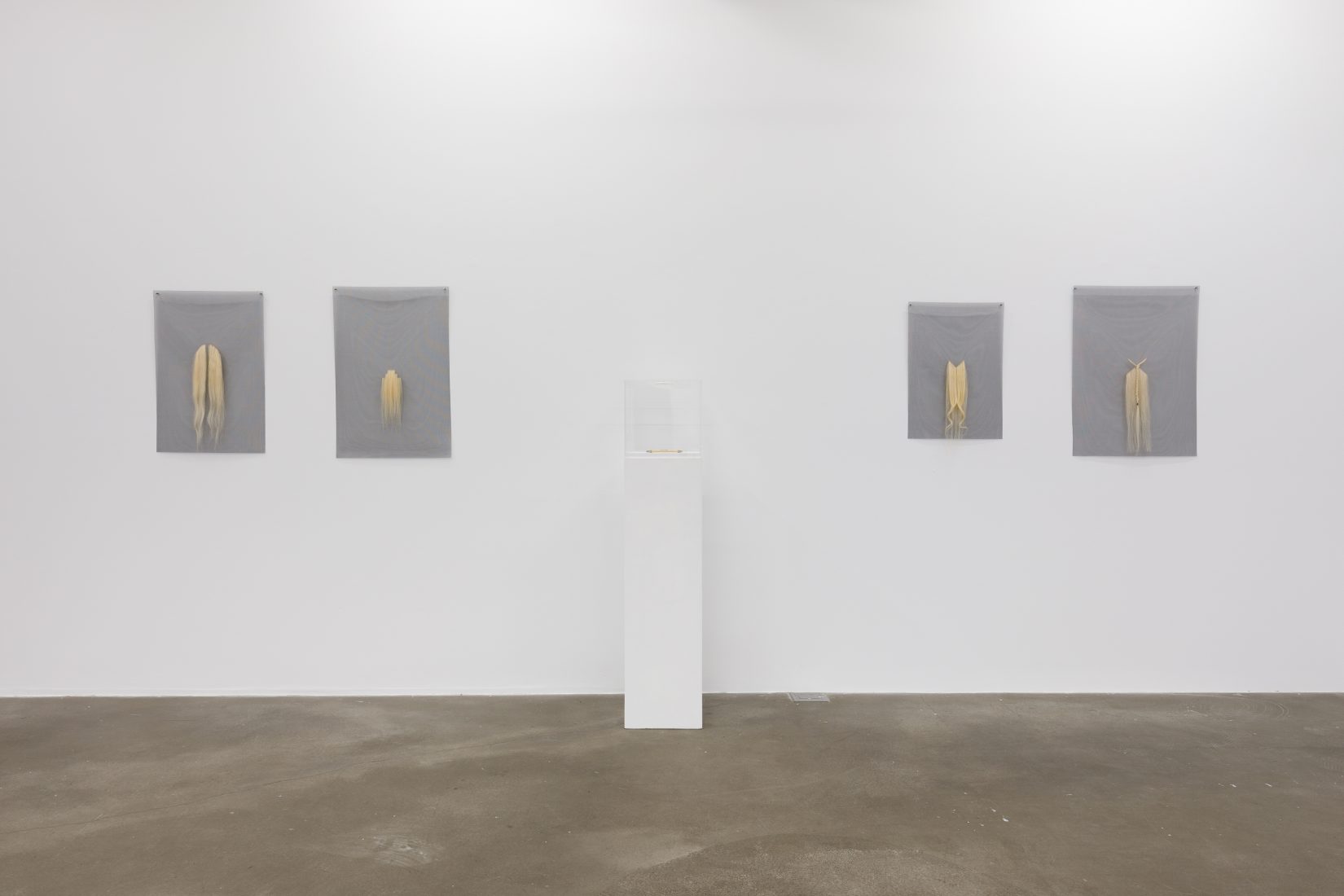 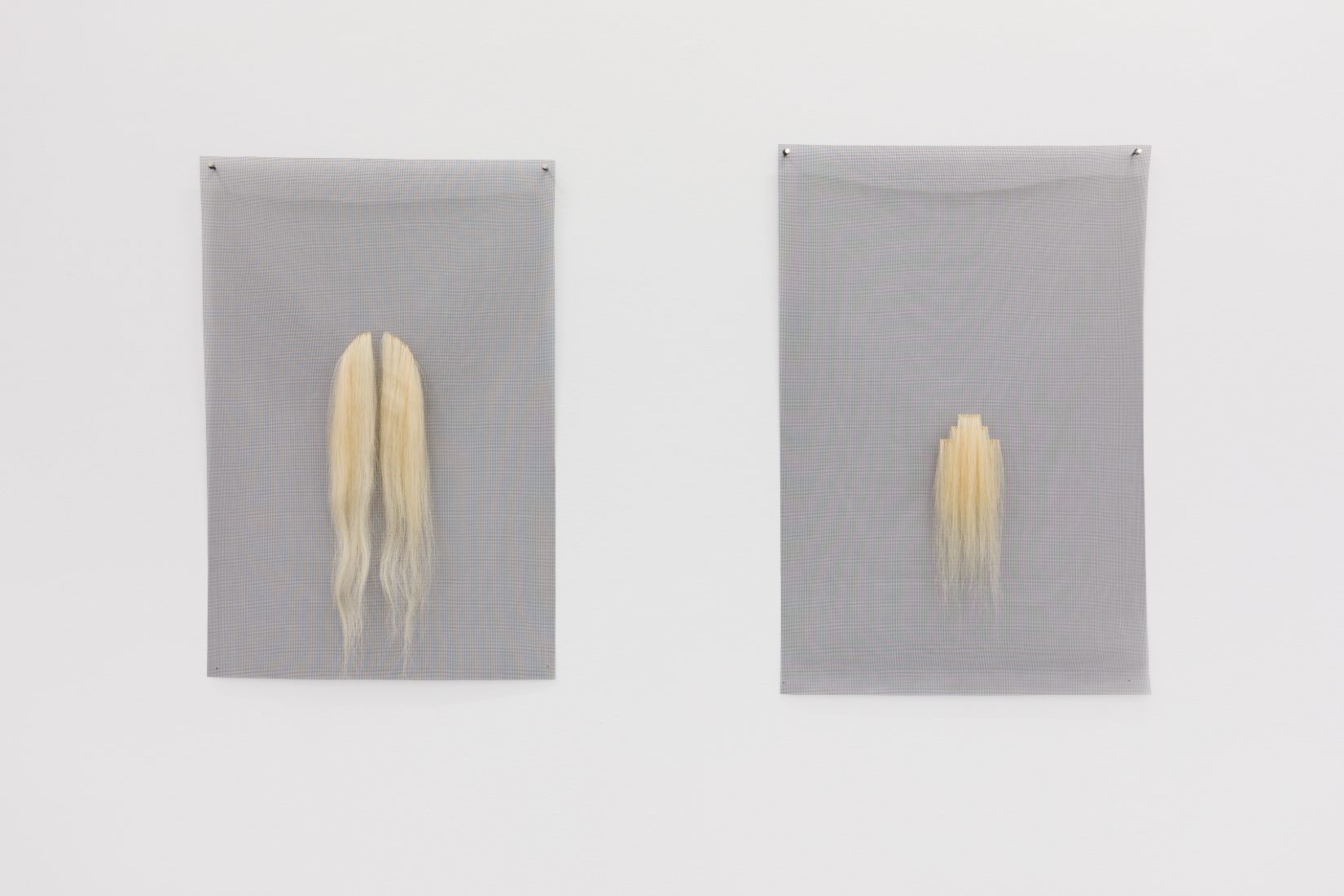 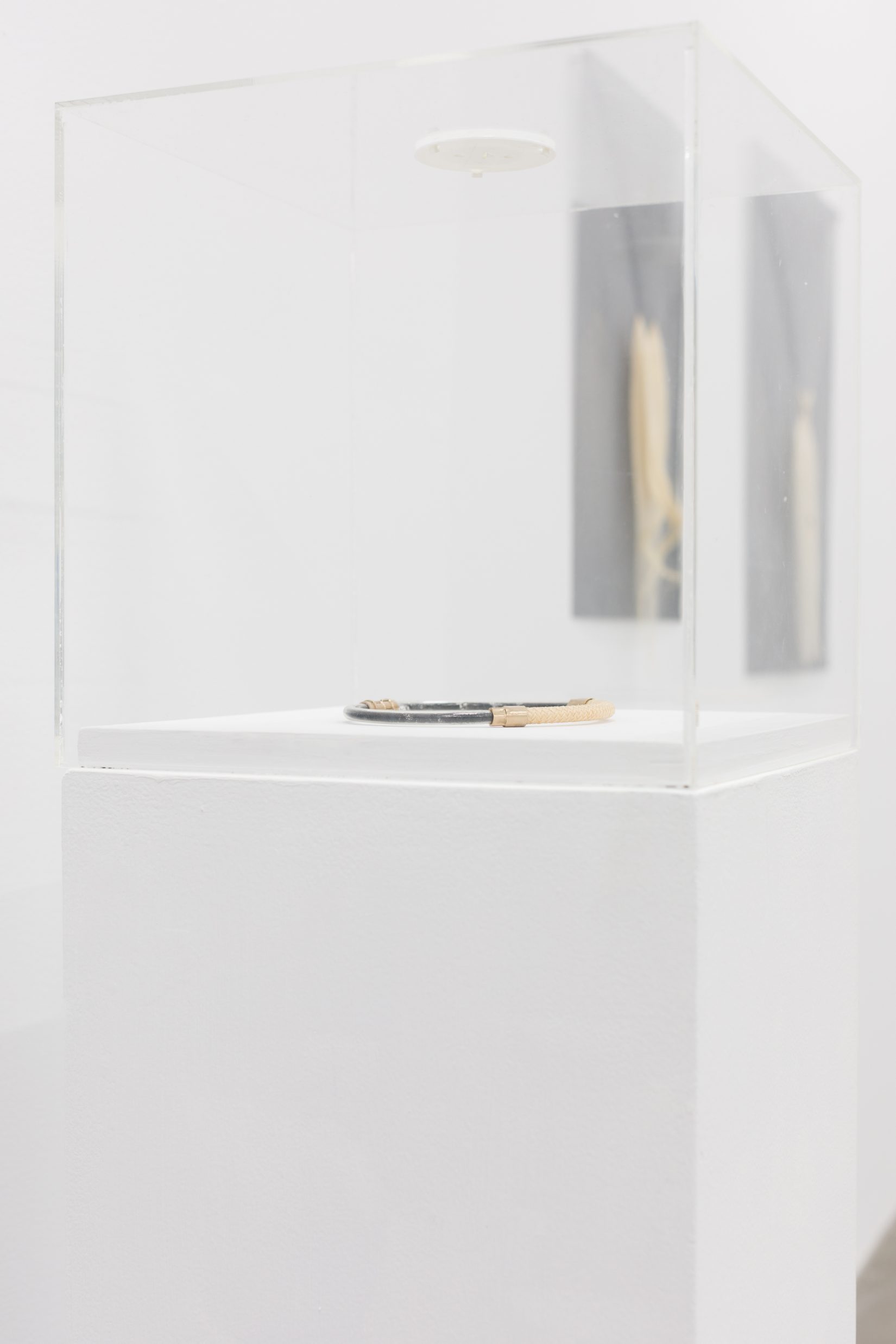 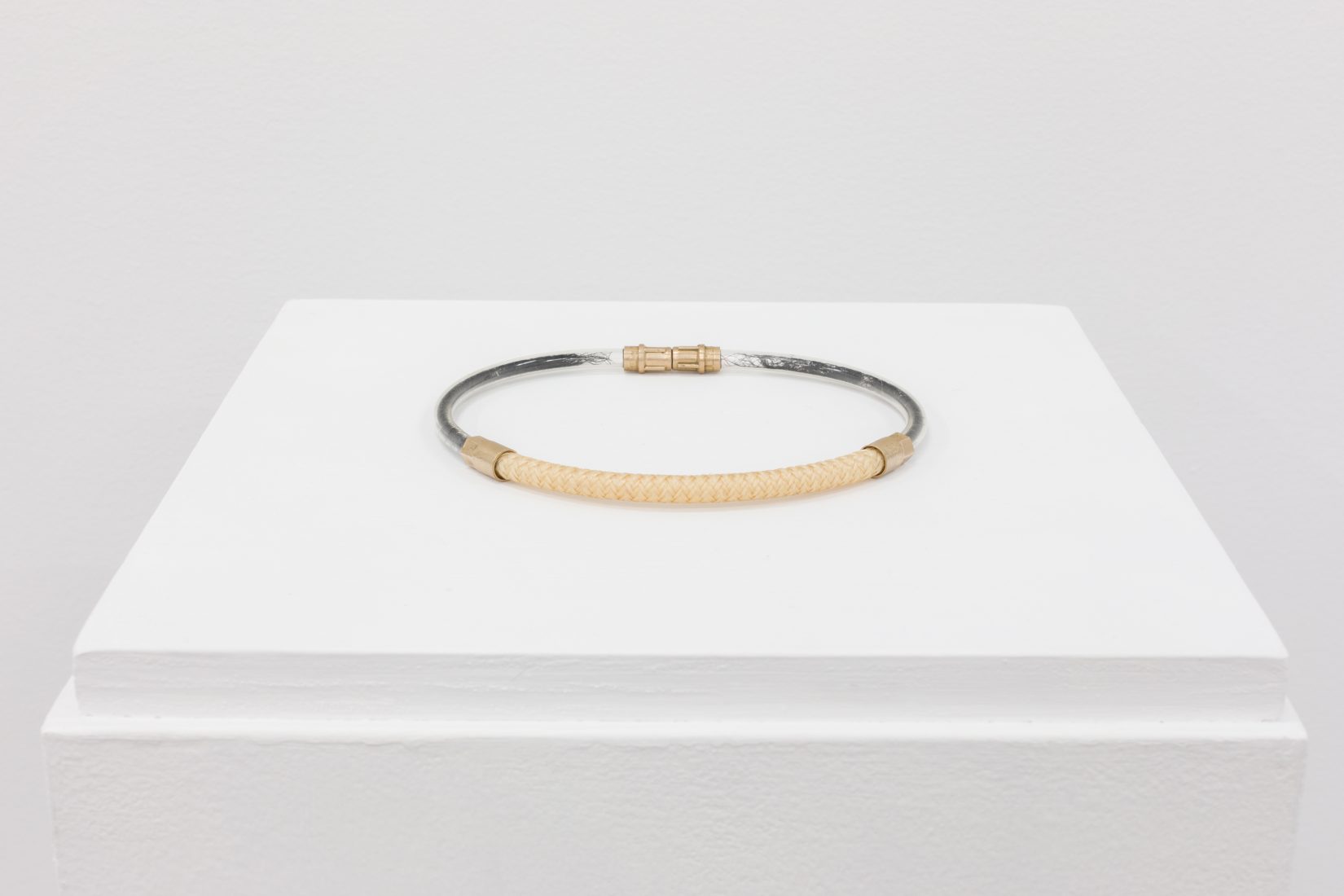 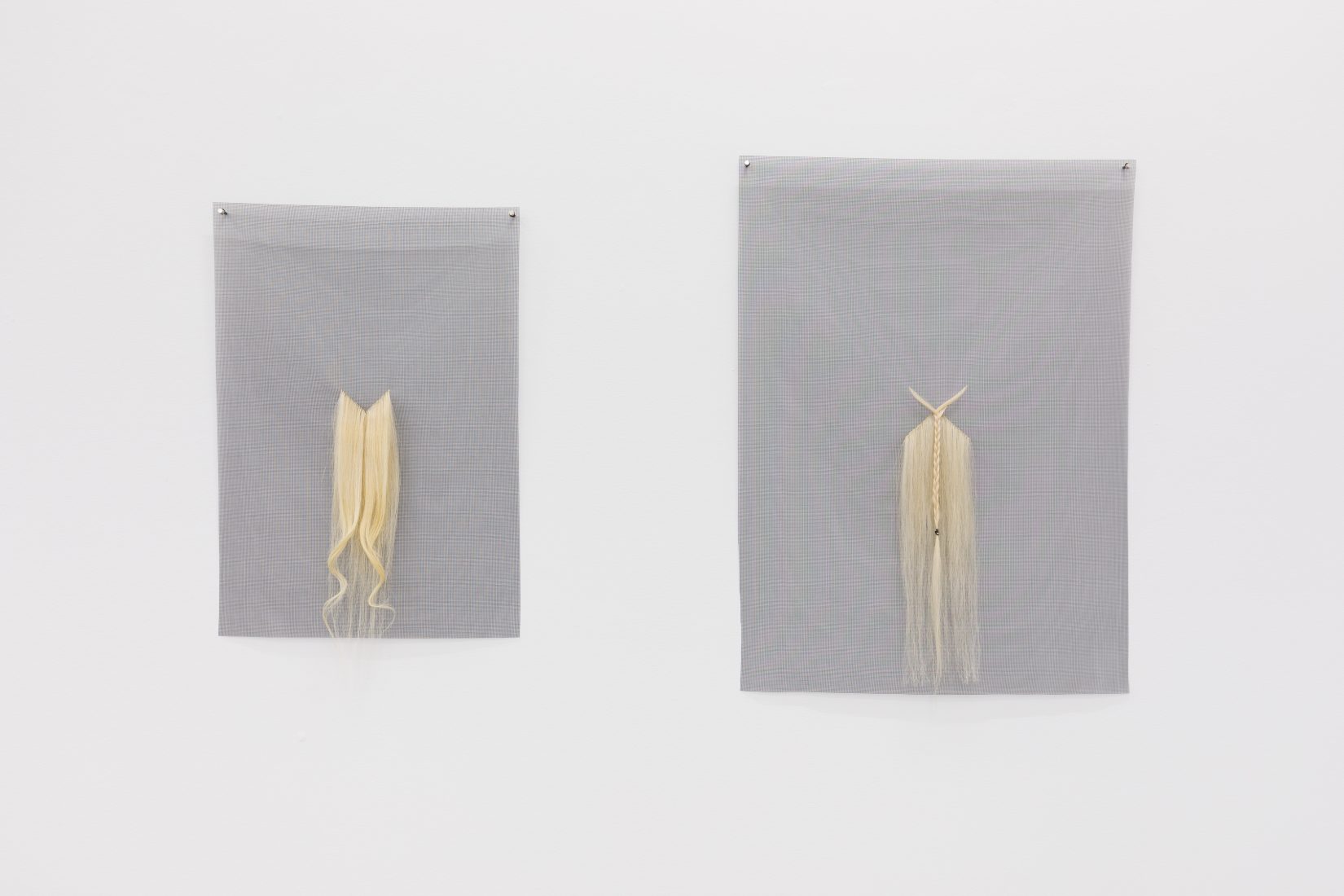 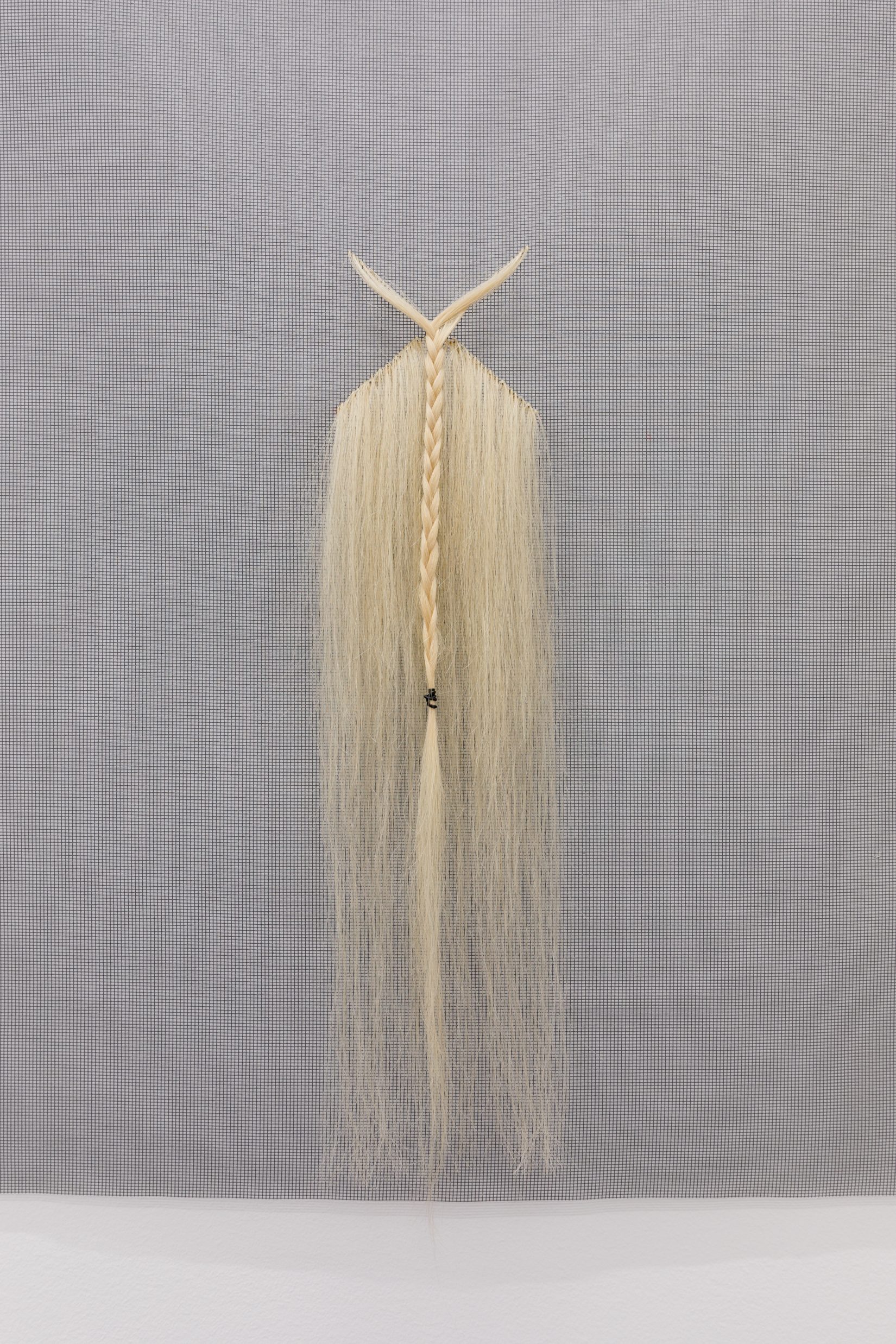 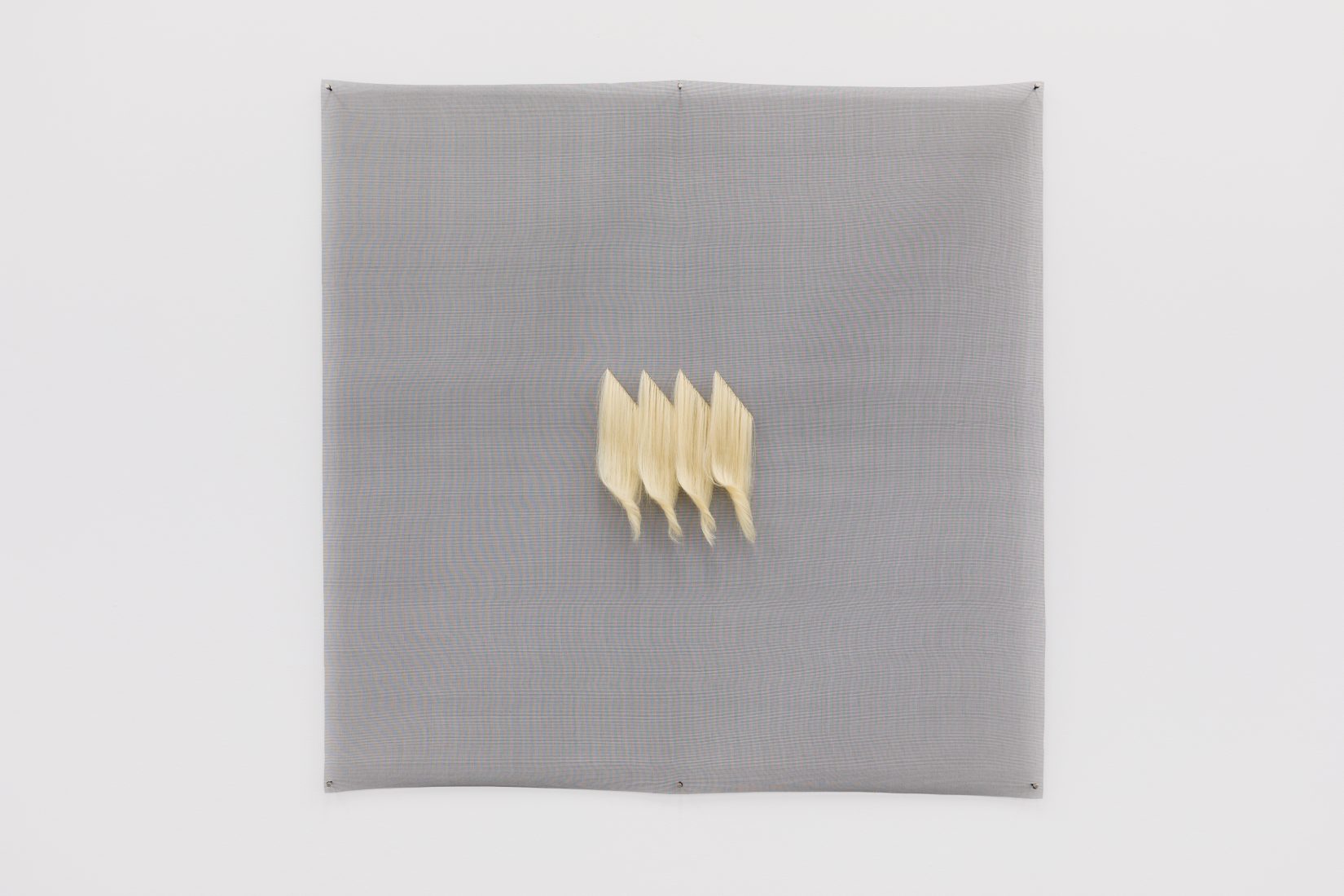 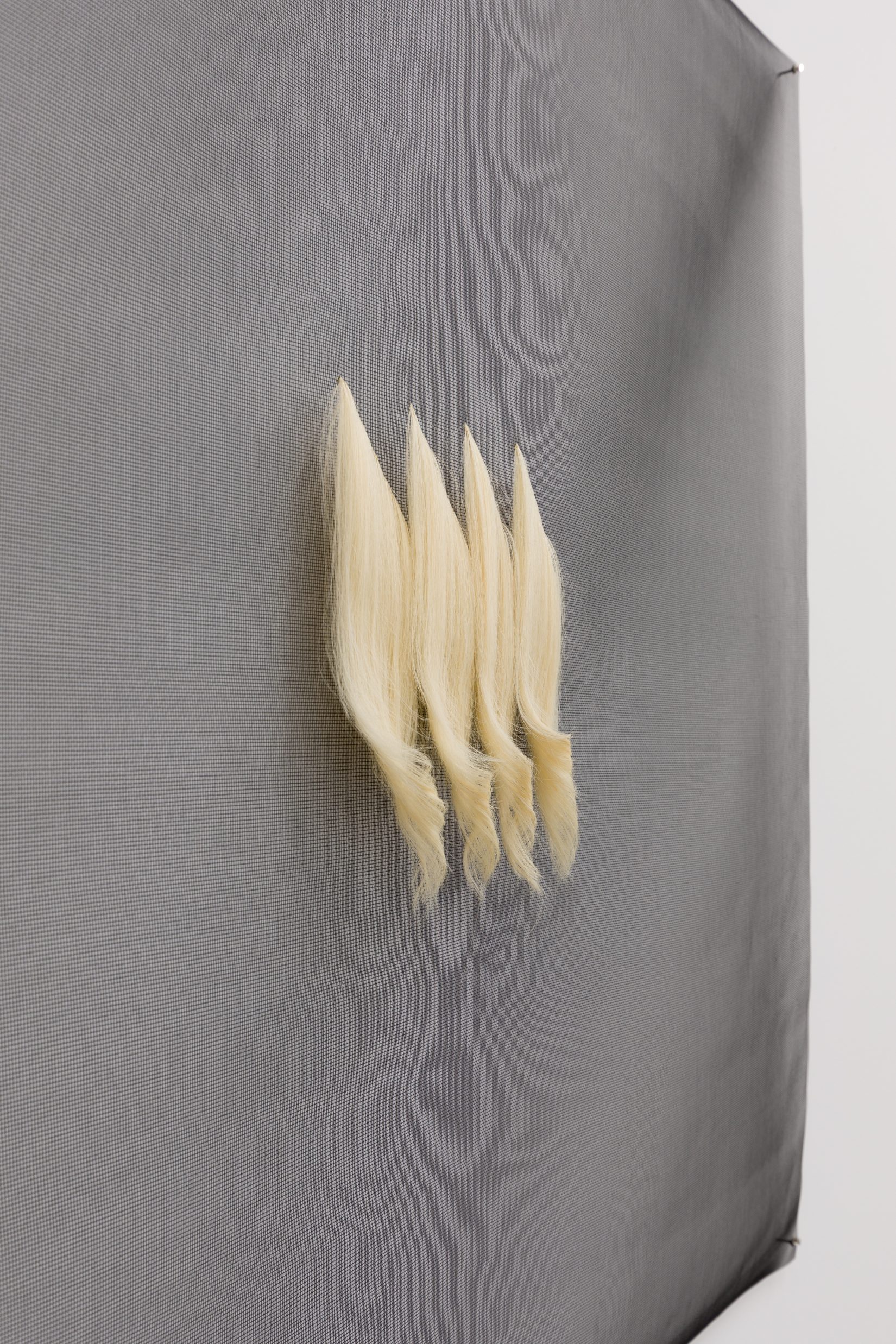 Burrard Arts Foundation presents The Golden Section by Karin Jones, a multidisciplinary artist with a background in jewellery making and design. The exhibition is the culmination of Jones’ fall studio residency at BAF and features geometric arrangements made from human hair extensions that Jones purchased from a local beauty supply shop. Borrowing from traditional wig making methods, she knotted the strands of hair onto mesh substrates, resulting in intricately arranged hair compositions that suspend from their secured placements.

For most of us, hair is ubiquitous. We encounter it on a daily basis, admiring its crop or bounce, or negotiating its care, styling or removal. It can convey personal beliefs or social position, and motivate judgements regarding health or wealth. Detached hair, depending on where it lands, can inspire disgust—as an unwanted discovery in a bowl of soup, for one example. On the other hand, the desire for lengths of hair of a particular aesthetic fuels a global human hair industry that generates hundreds of millions of dollars annually—hair that is longer, thicker, straighter, or lighter.

The Golden Section fixates on the latter, employing as its primary material bleached hair extensions, procured and processed in Asia and exported for sale to North American buyers—in the Western world, for centuries, blonde hair has been associated with idealized feminine beauty. The exhibition’s title, while doubling as a qualitative descriptor for each of the arranged tresses, also refers to a mathematical principle employed in art as a compositional strategy and believed to enhance aesthetic appeal. The word golden in this case, and abundantly in the English language, is used to denote something as a fundamental truth or solution—a golden opportunity, the golden ticket, the golden rule.

Jones challenges and complicates conventions of language and beauty through a nearly obsessive examination of her material, slowly and methodically exploring its bend, curl and blend, and importantly, its shortcomings. The wall arrangements themselves are not entirely wiglike, with small clusters knotted in angular rows that resist overlap, allowing the viewer to focus on individual filaments of varying condition and unnatural hue. Punctuating the south wall is a singular sculptural work—a dazzling and innovative necklace—that juxtaposes an intricate, pale braid against a tubed vessel holding African hair, further emphasizing the depth of Jones’ analysis.

At a surface level, the works are materially inventive and reminiscent of long-established textile arts made using knotting techniques. In the context of Jones’ broader practice, however, The Golden Section reveals itself to be continuing her longstanding exploration of identity and race through fine craft—it is an arresting contemplation of the artist’s own desires and the cultural implications and ramifications of bleached blonde hair.