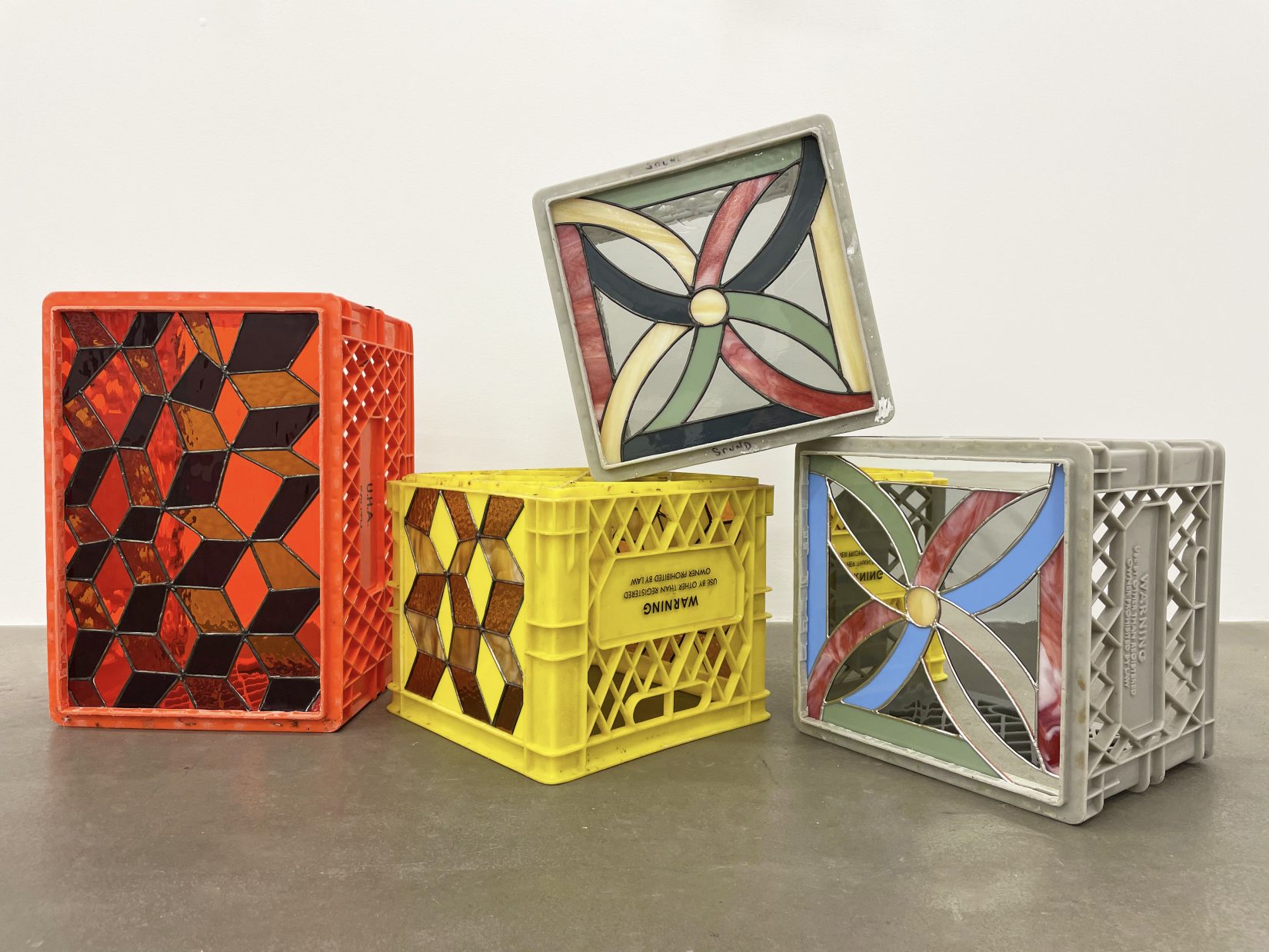 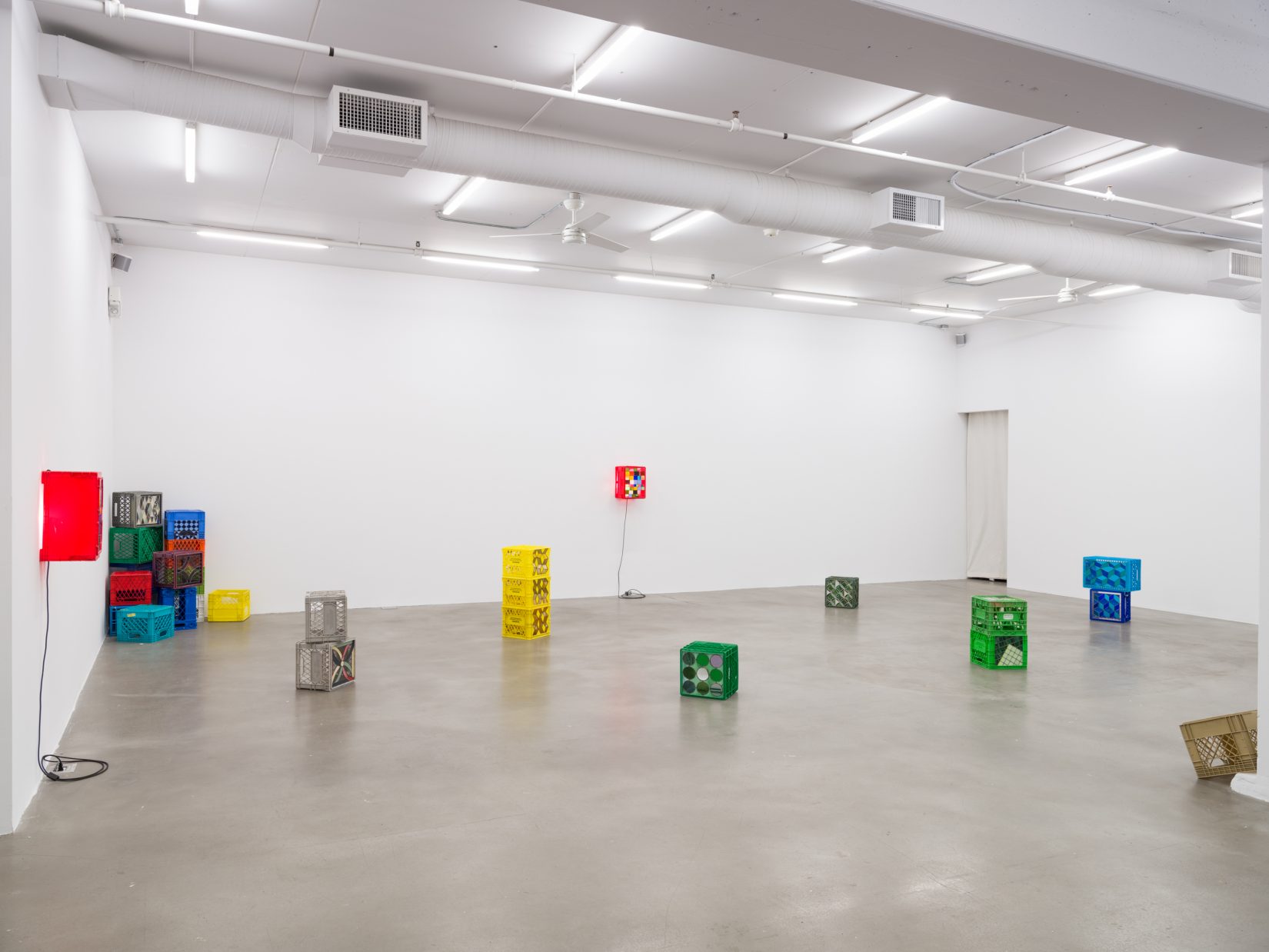 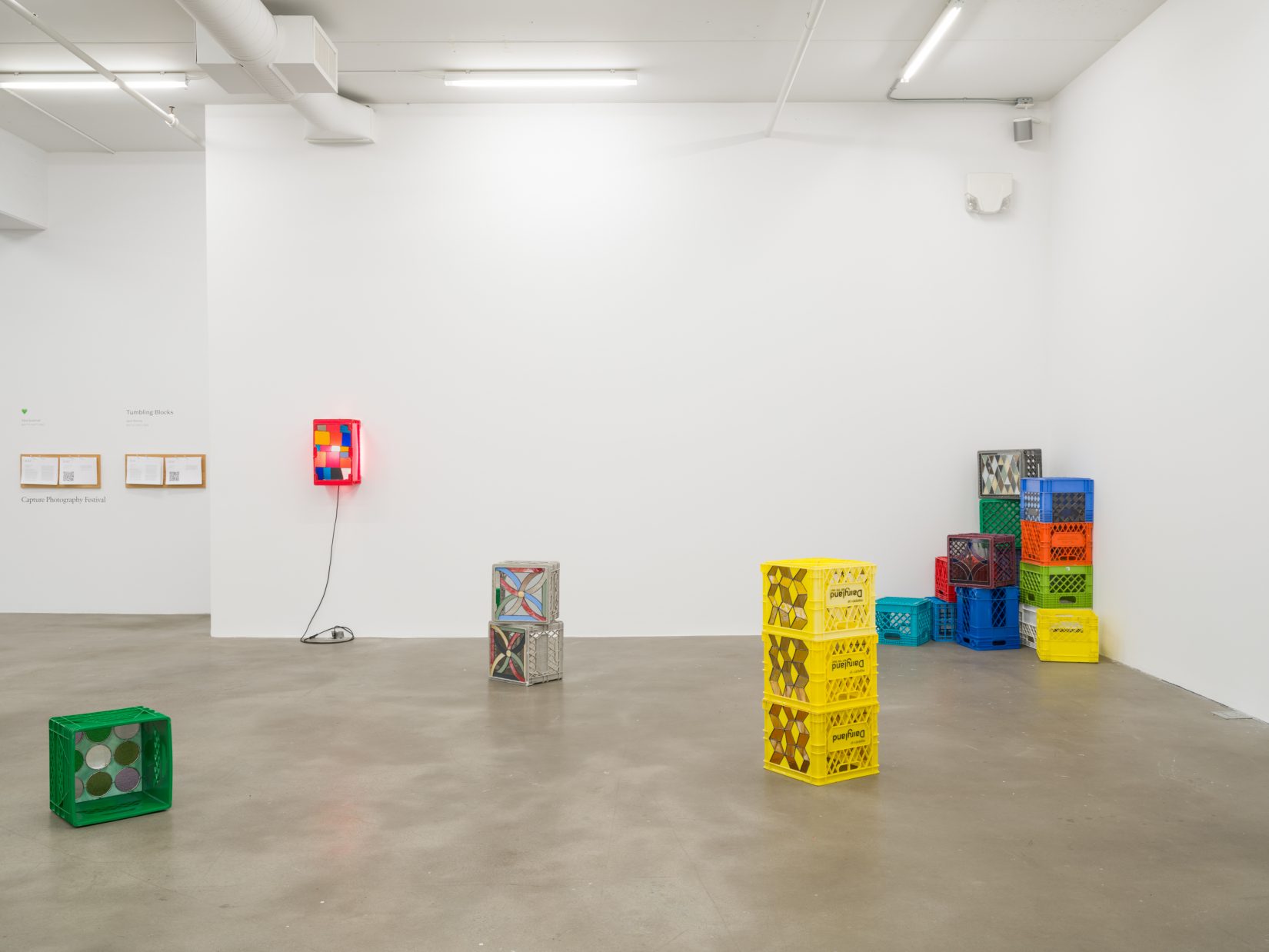 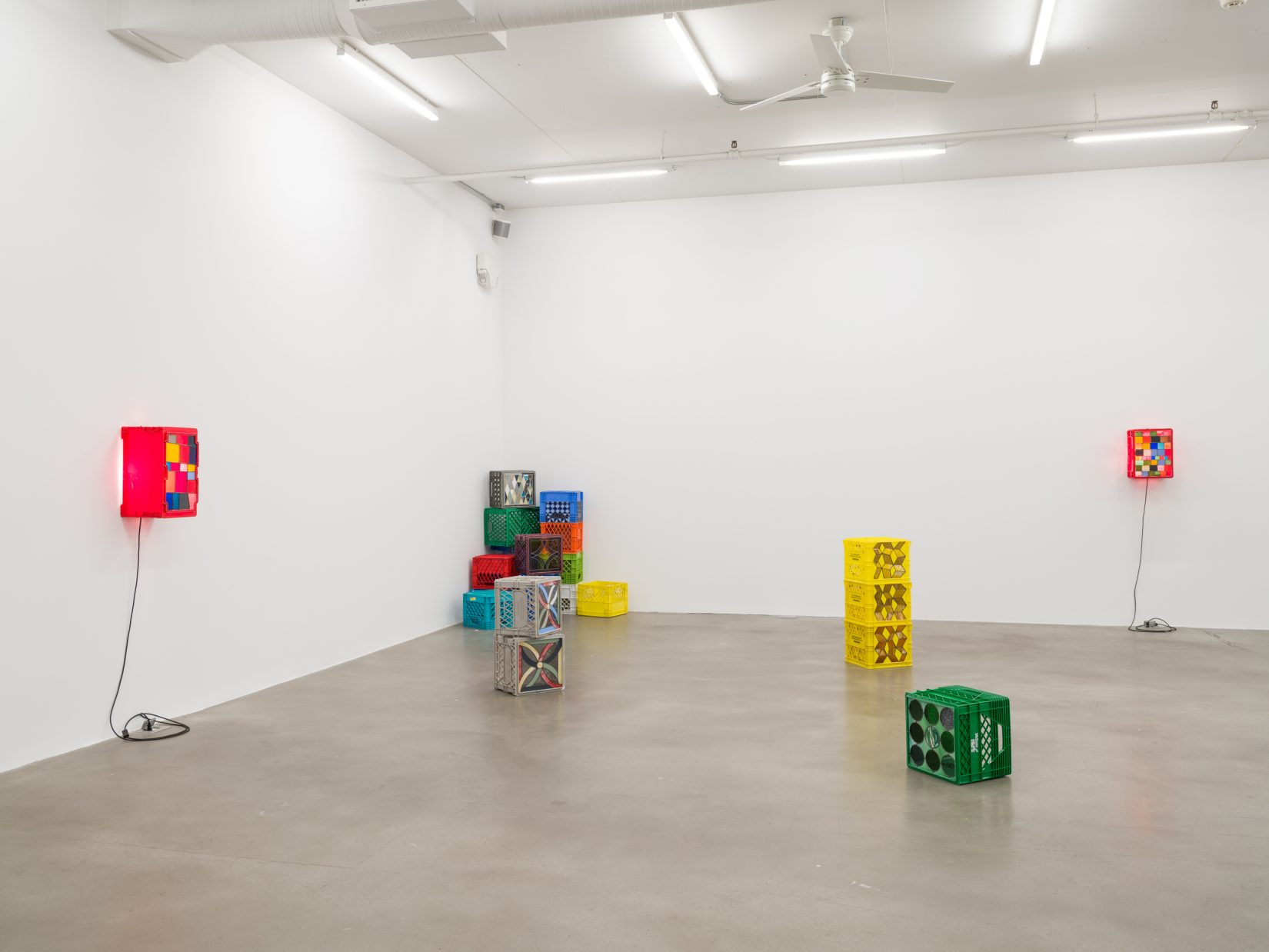 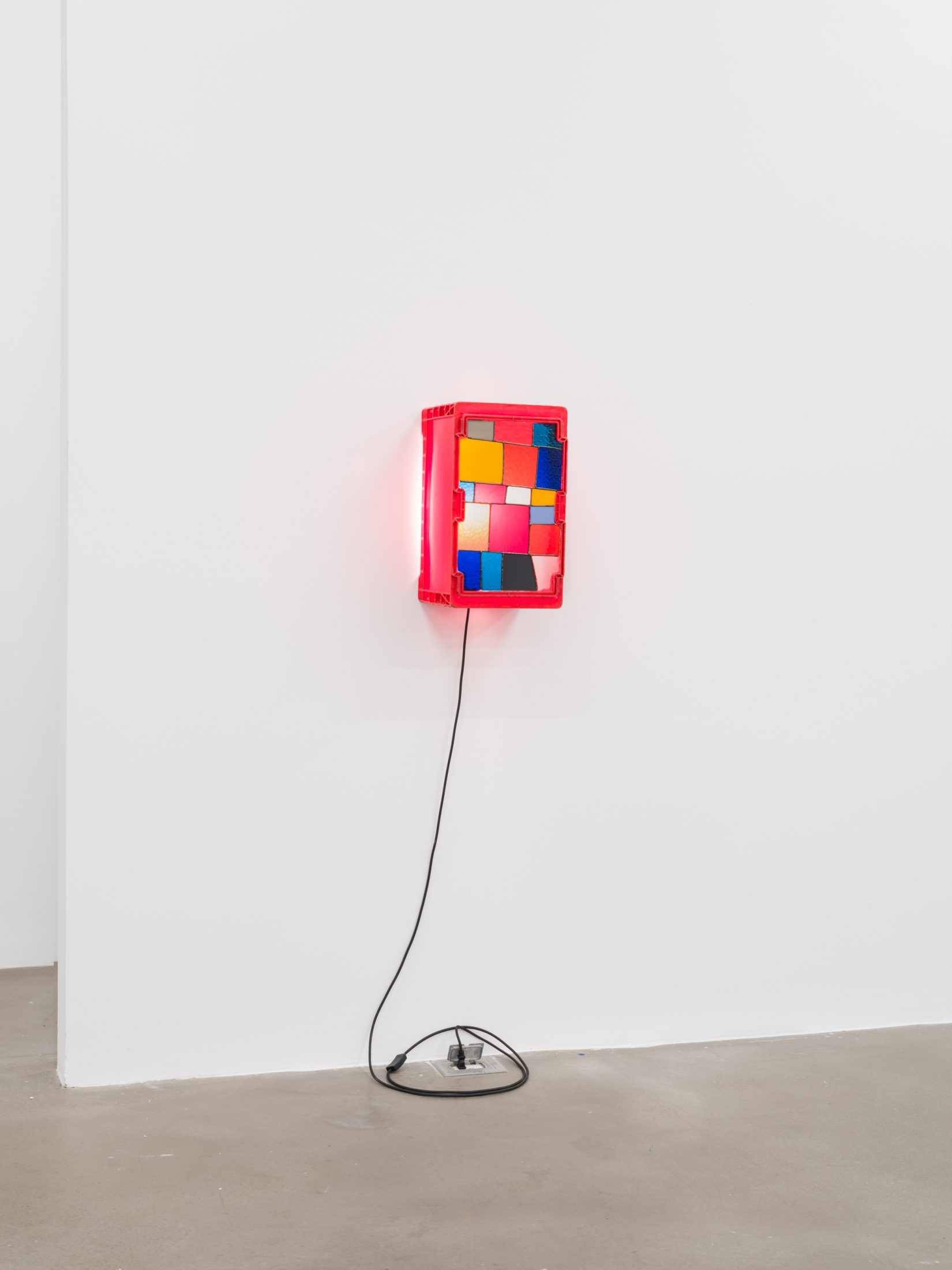 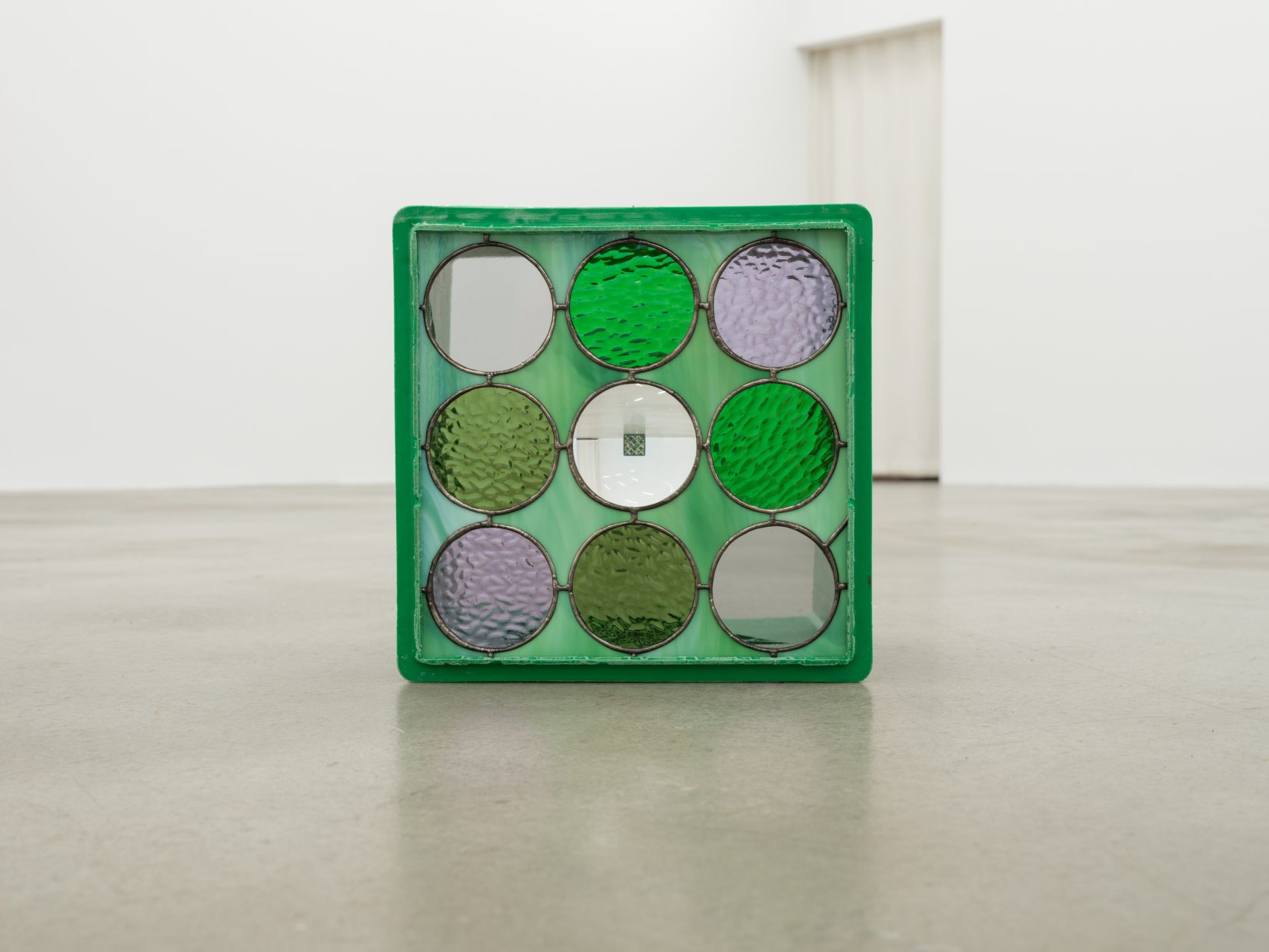 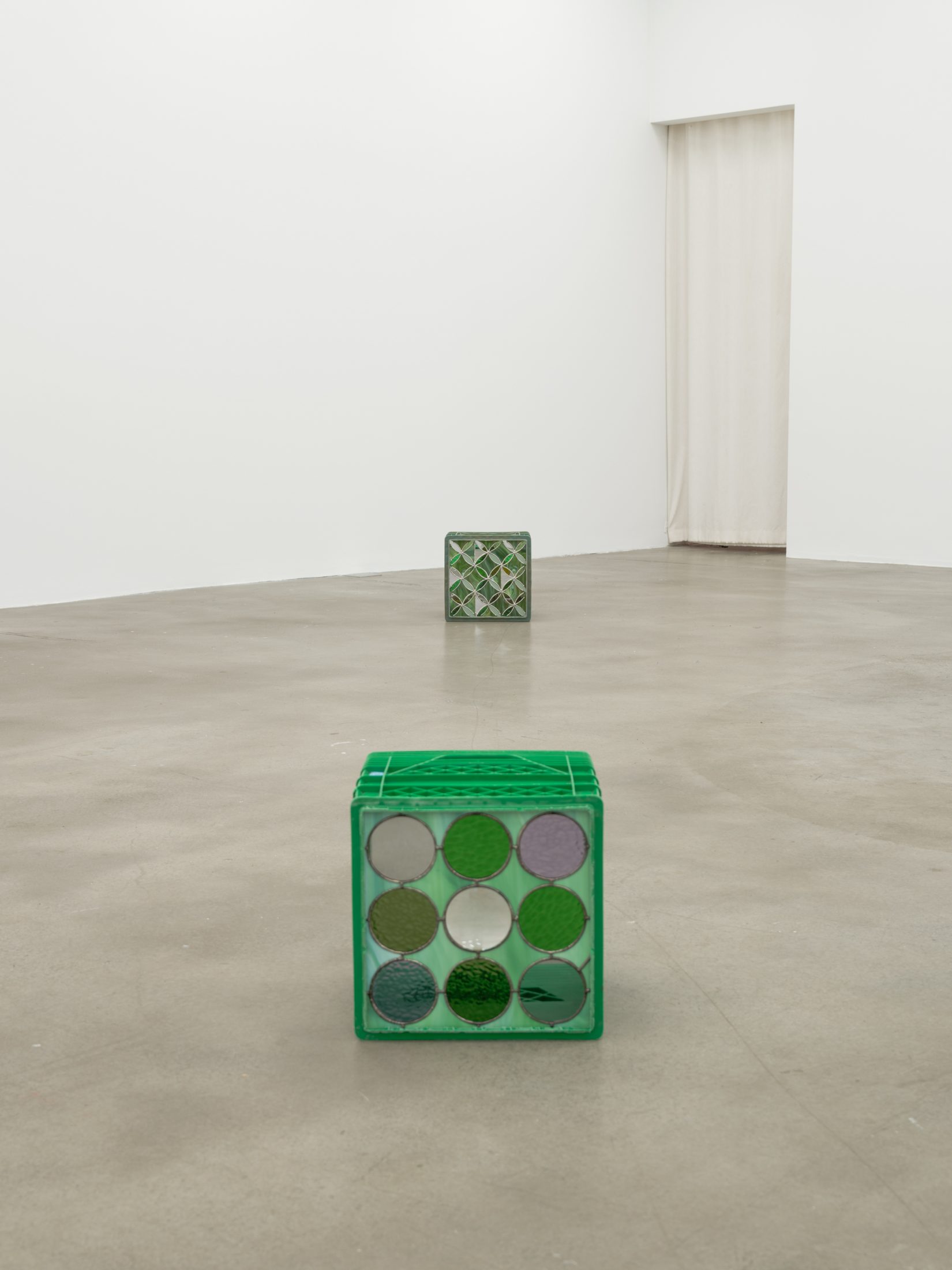 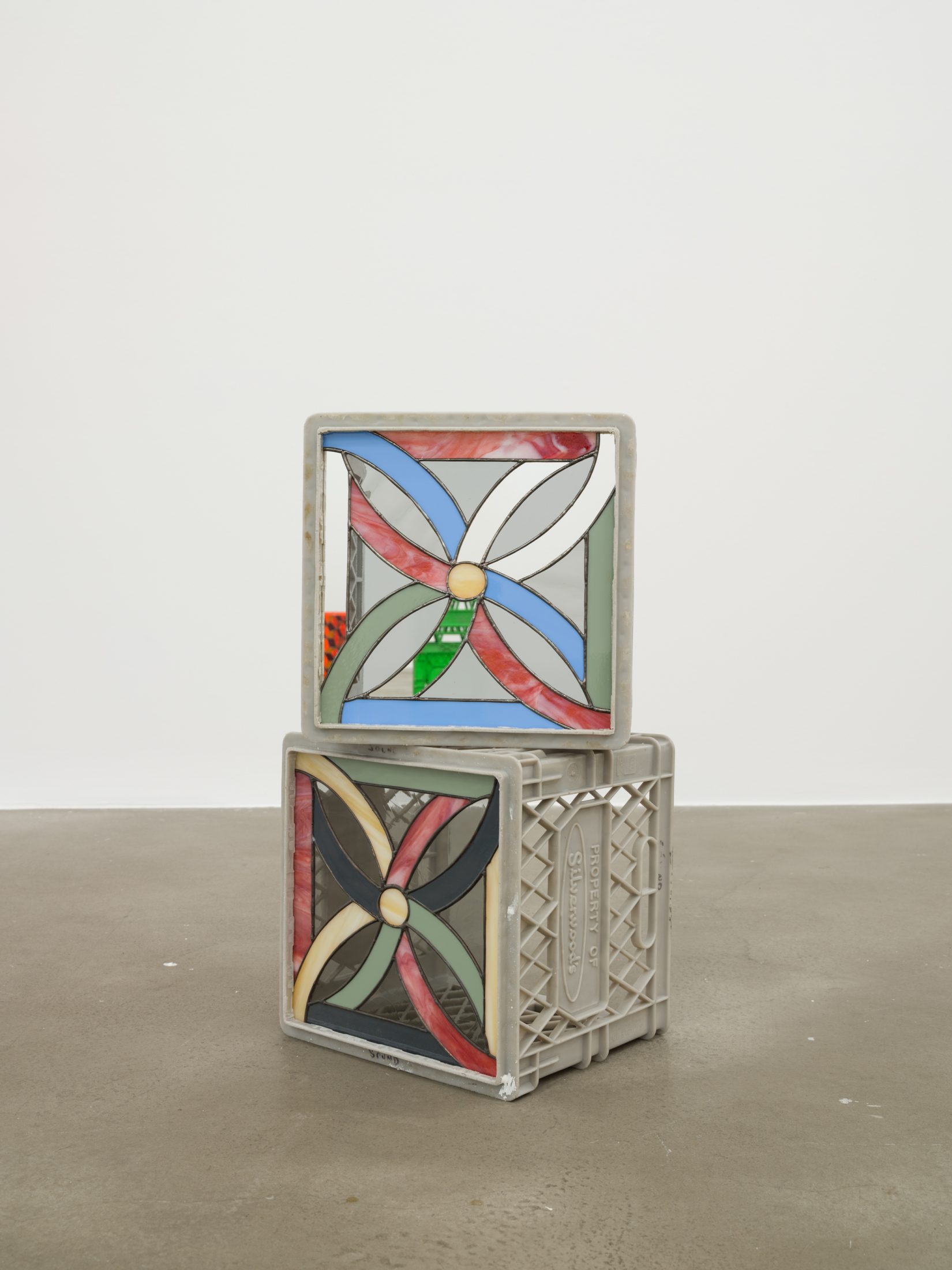 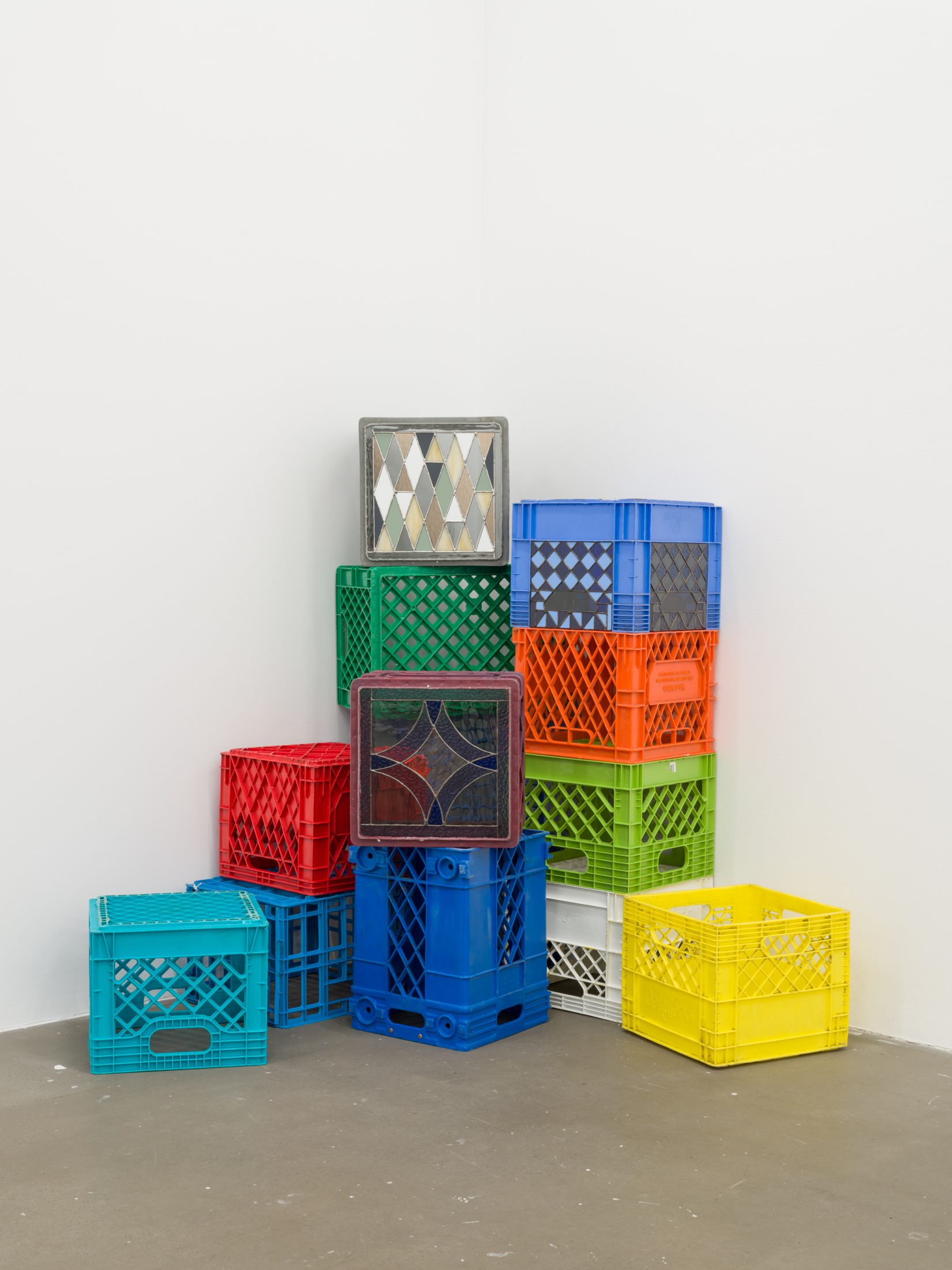 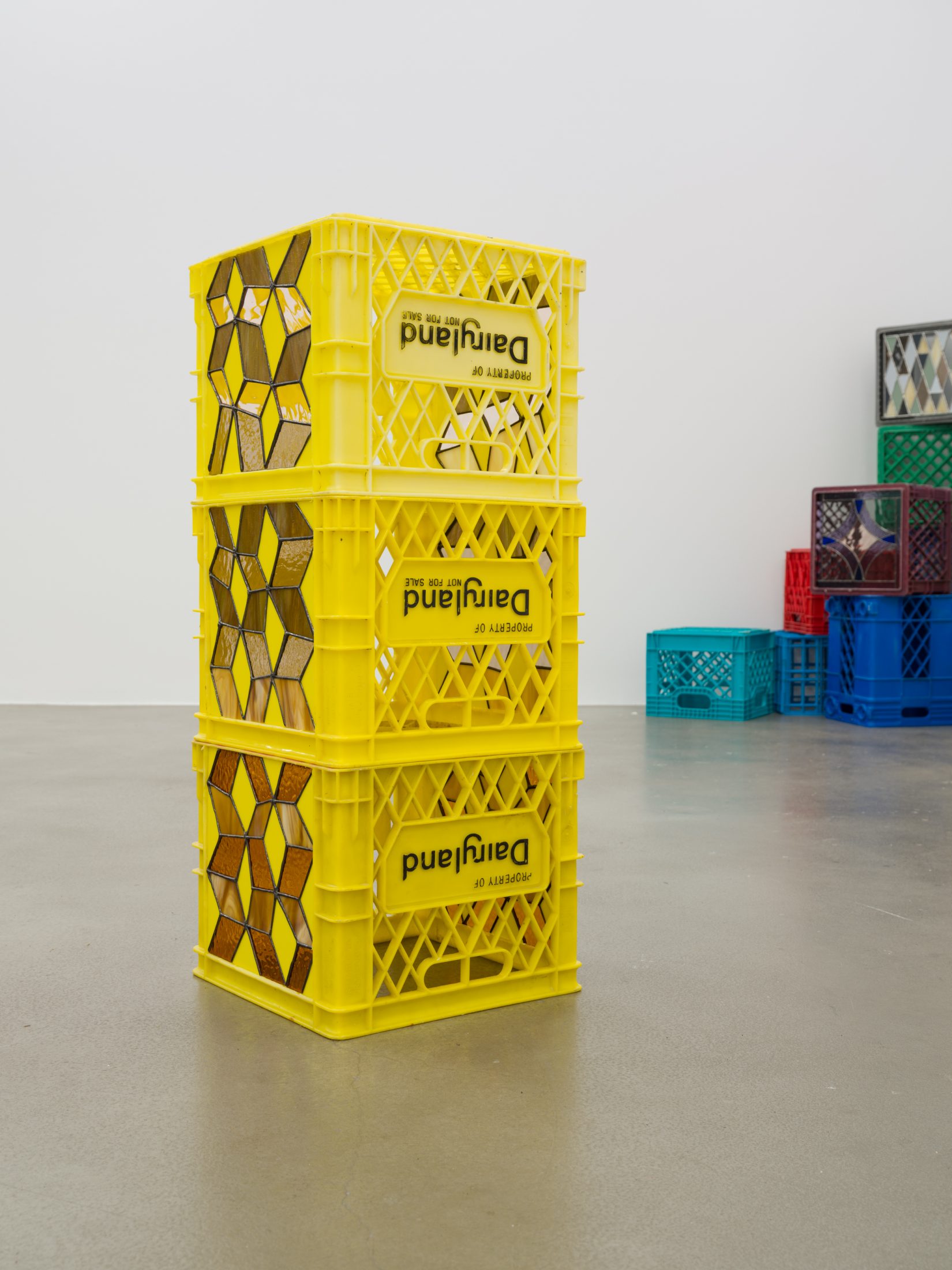 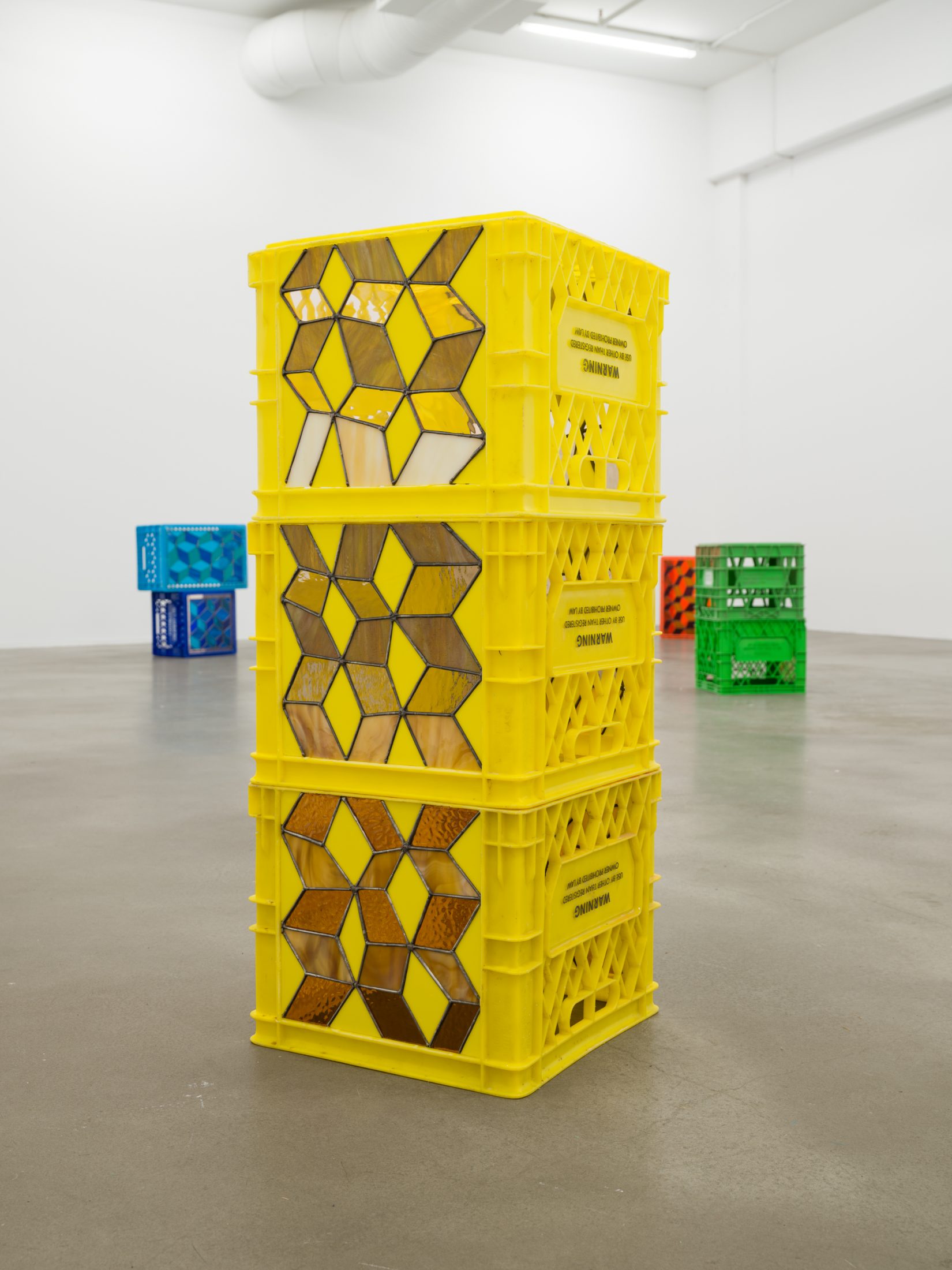 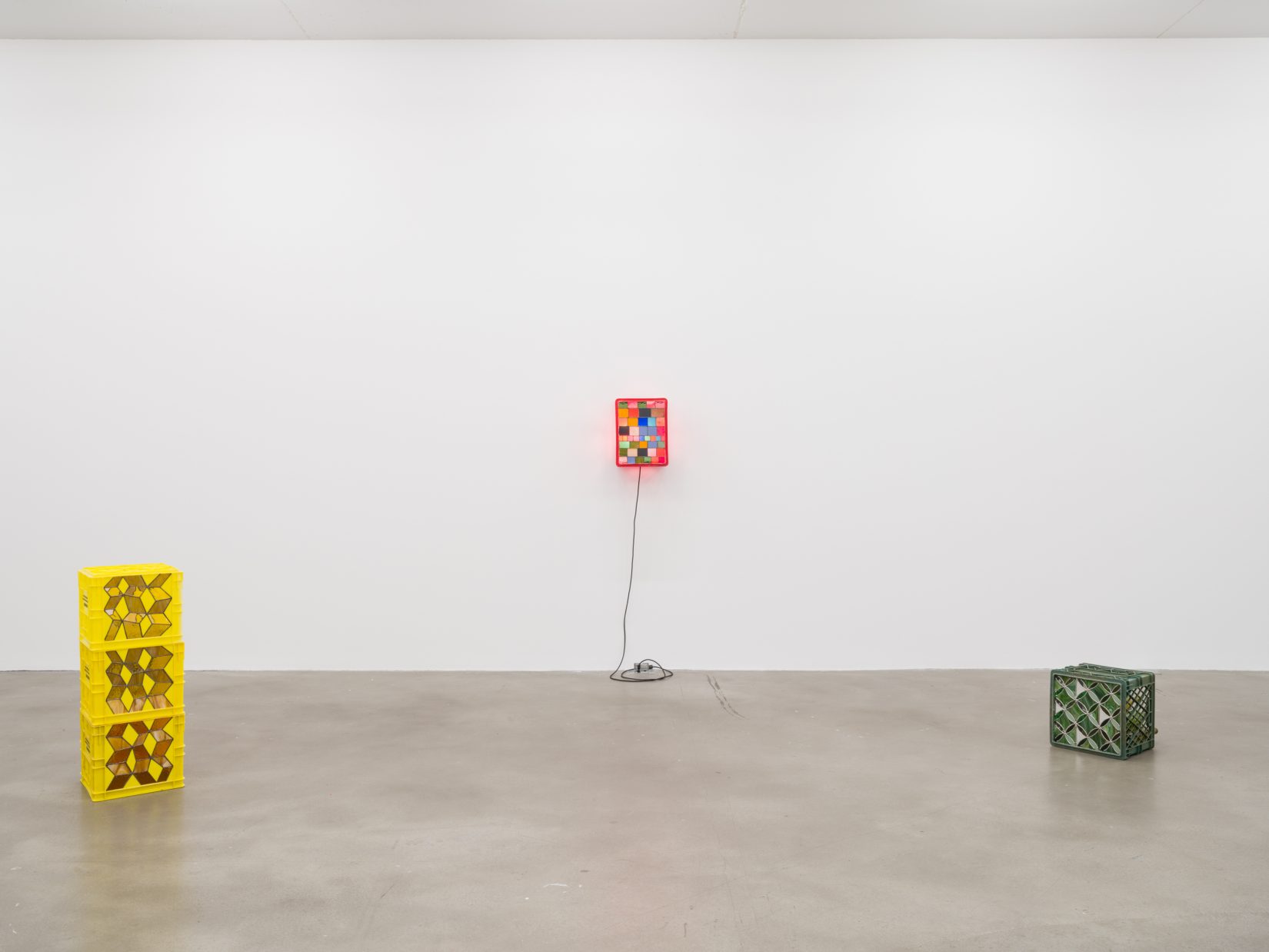 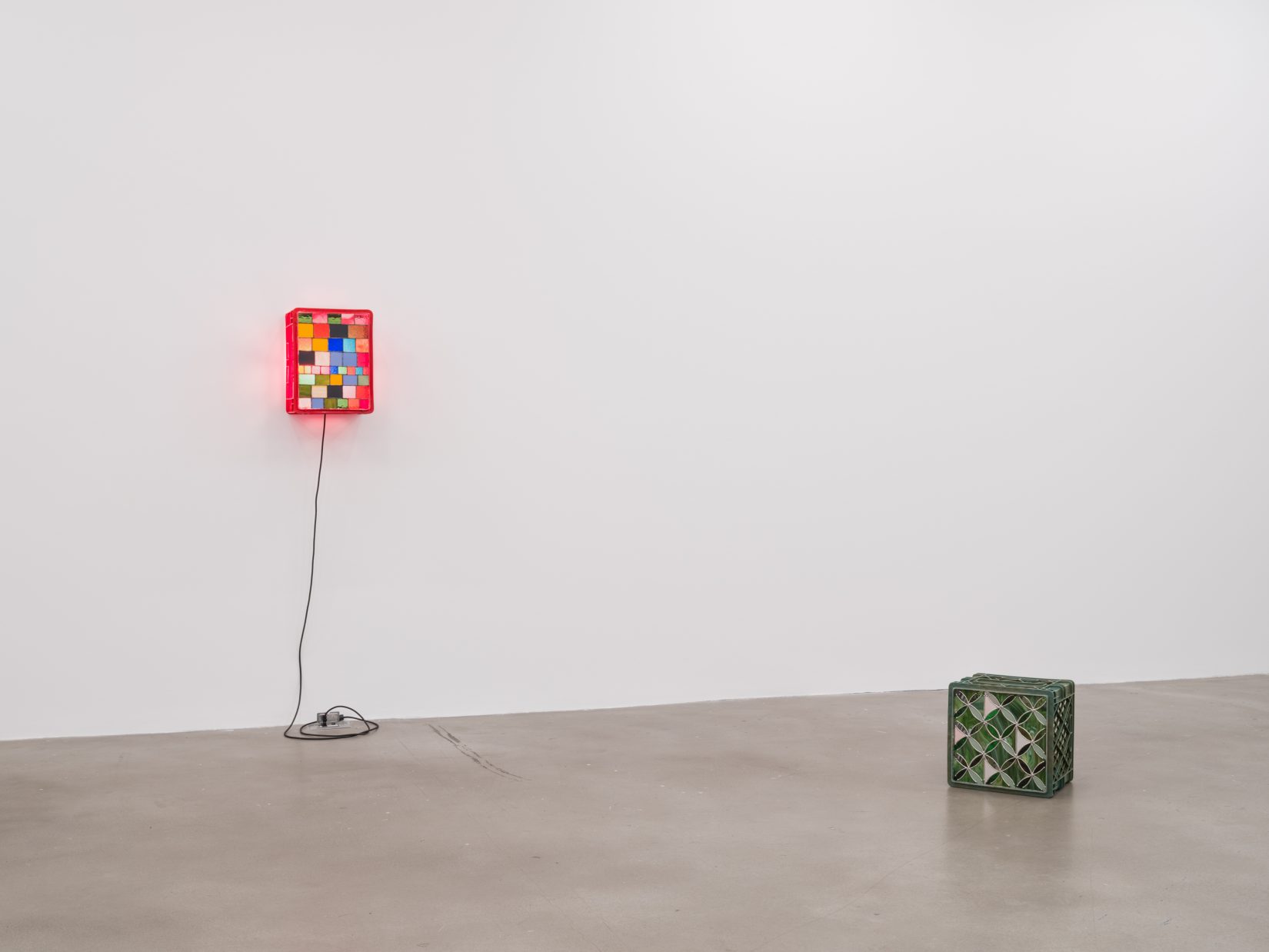 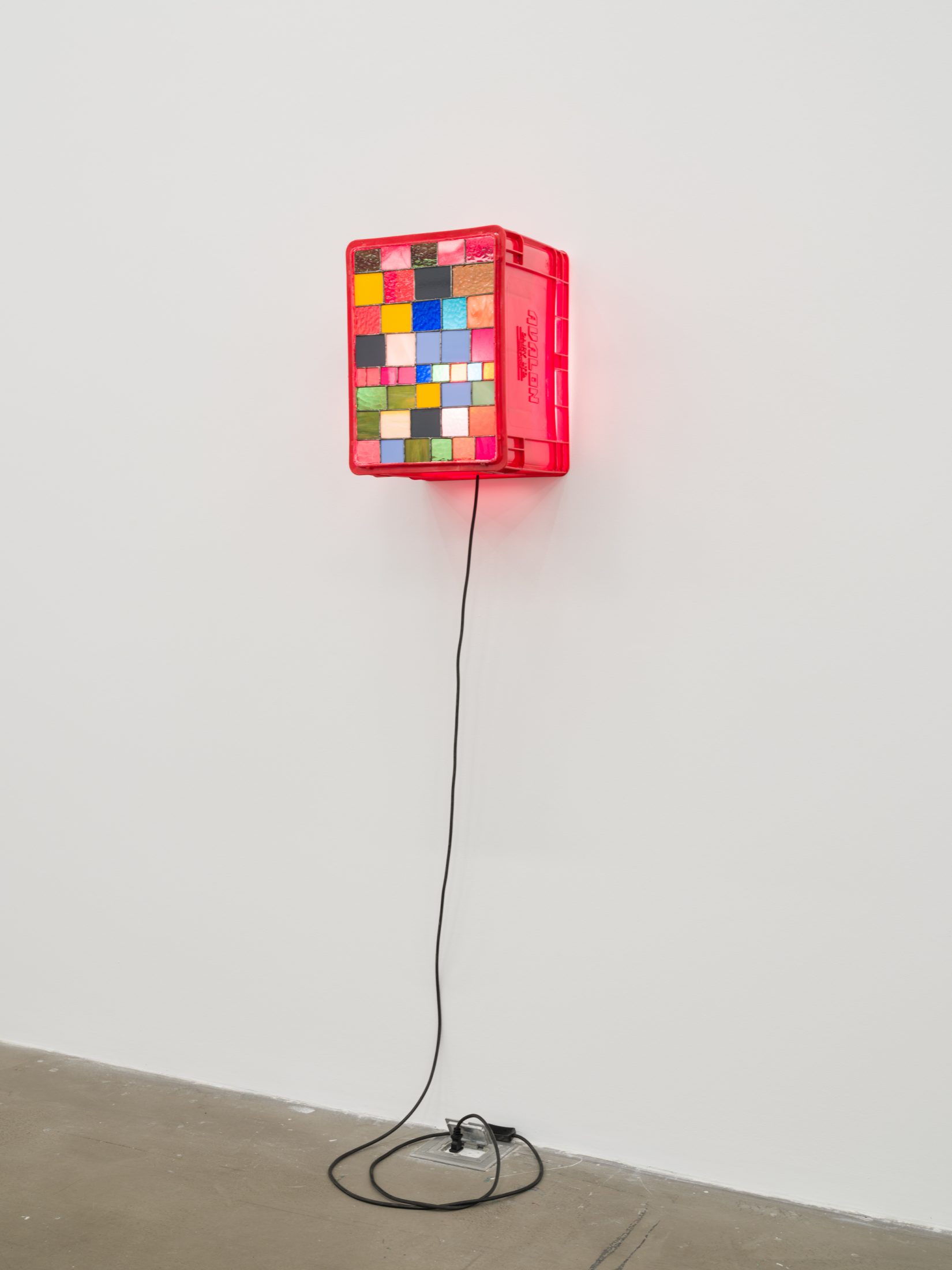 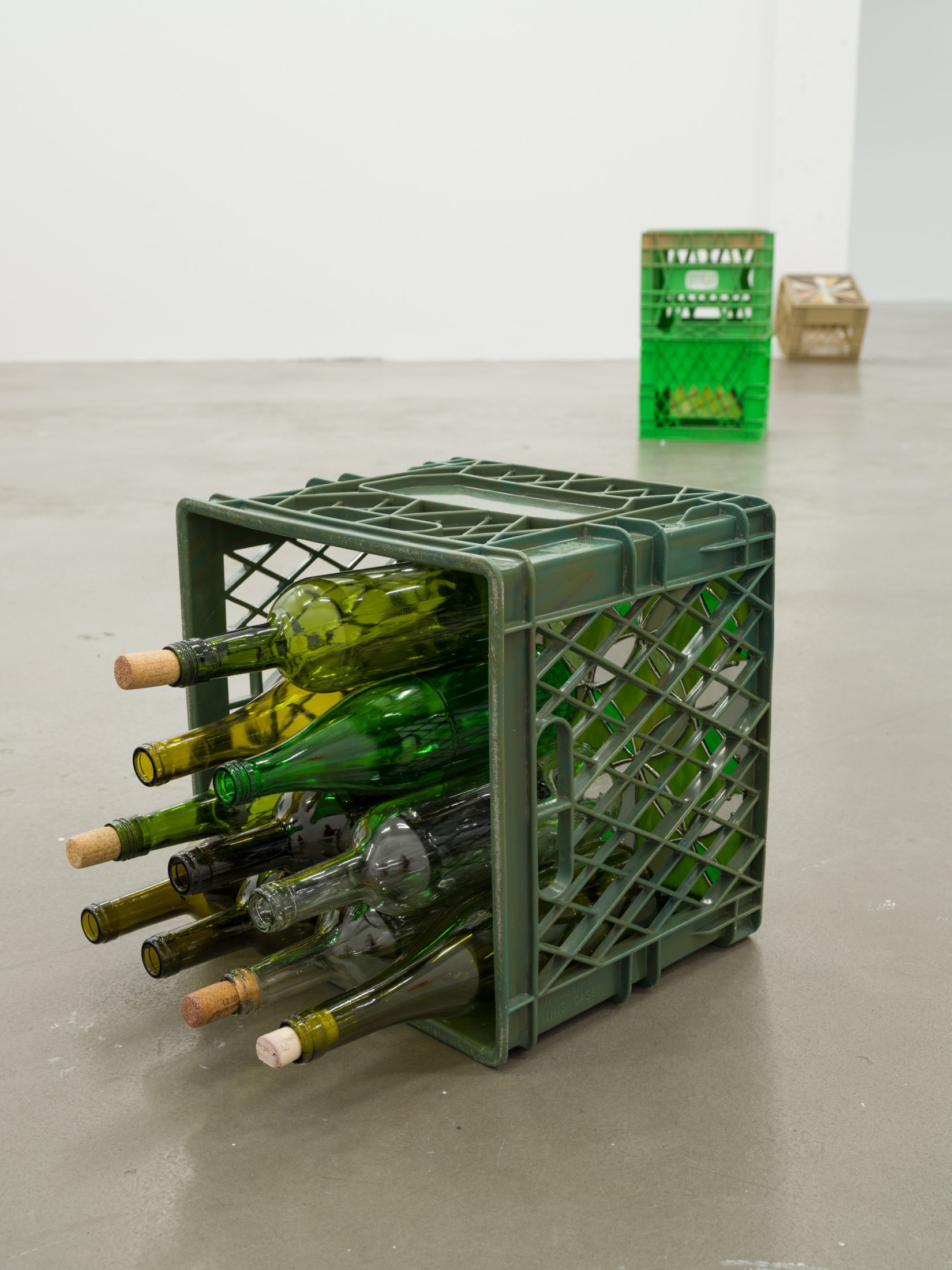 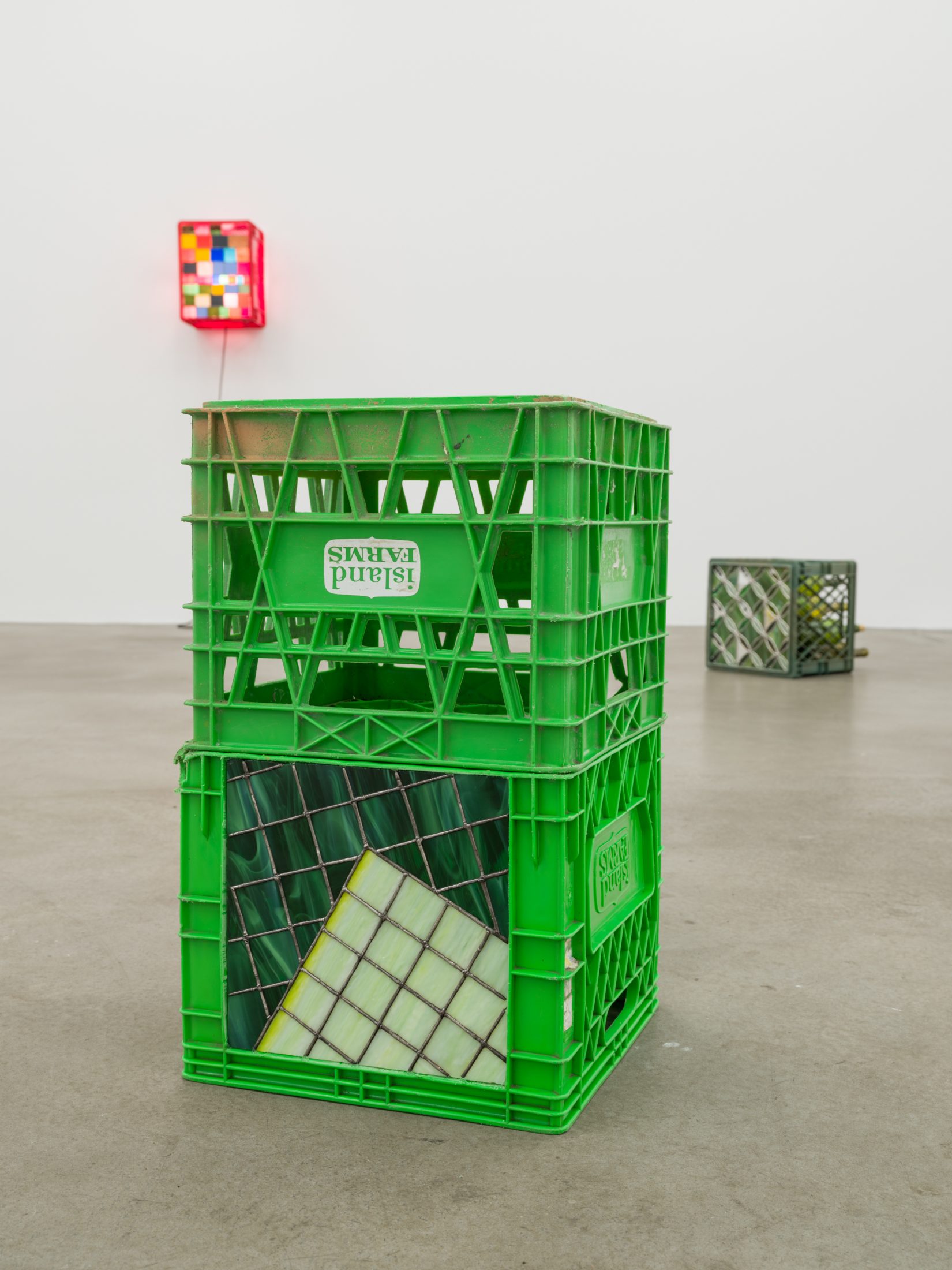 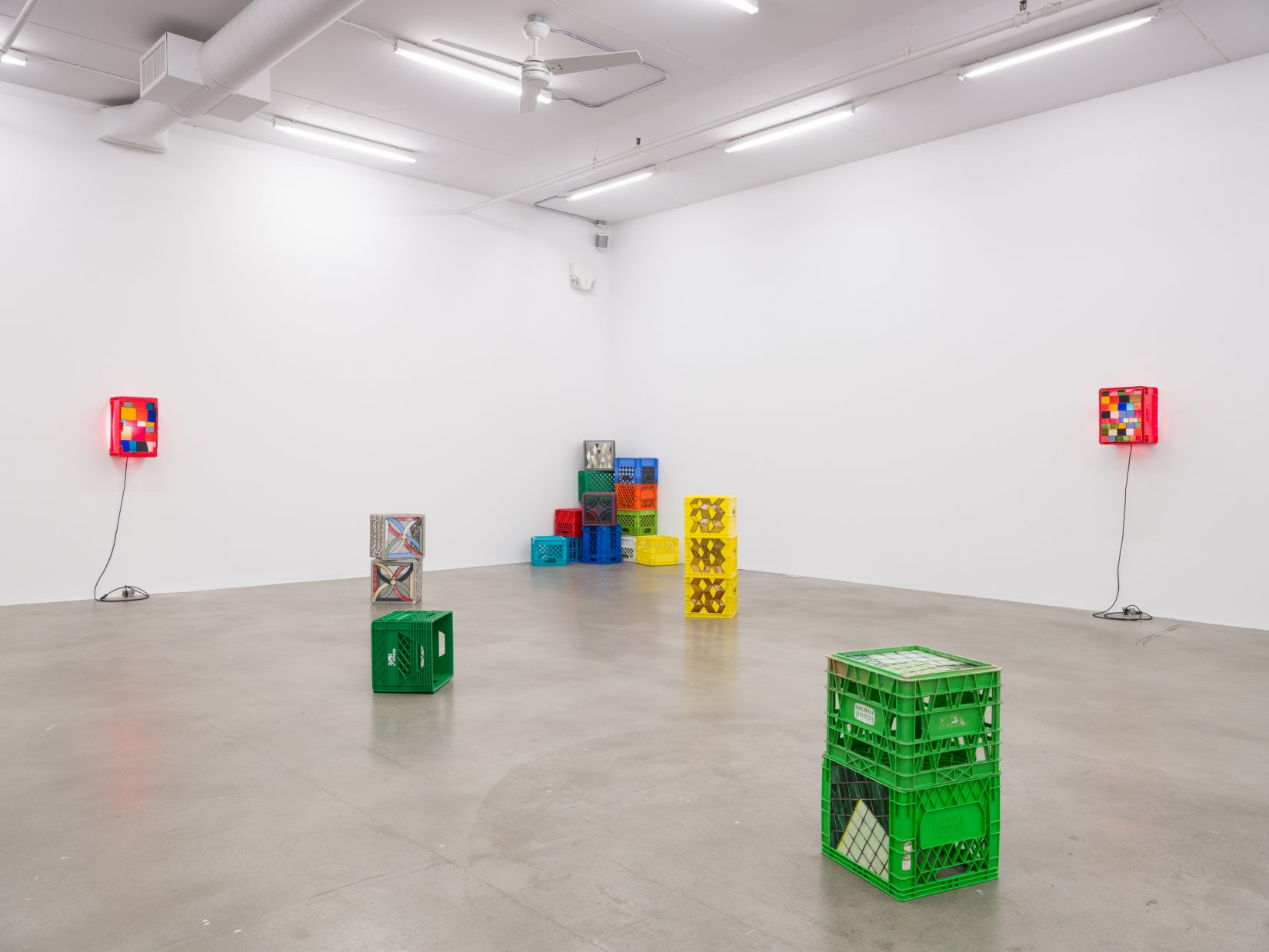 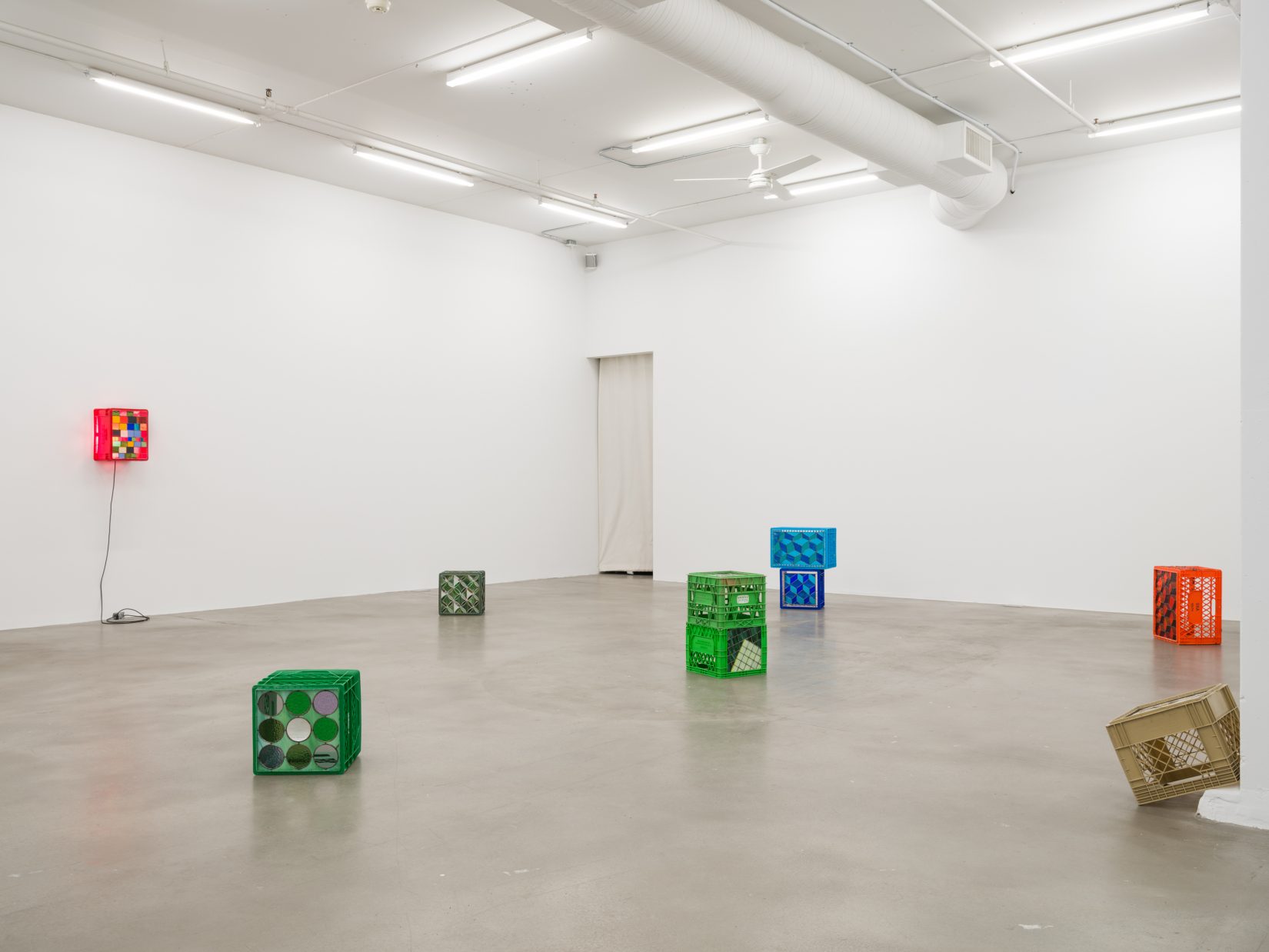 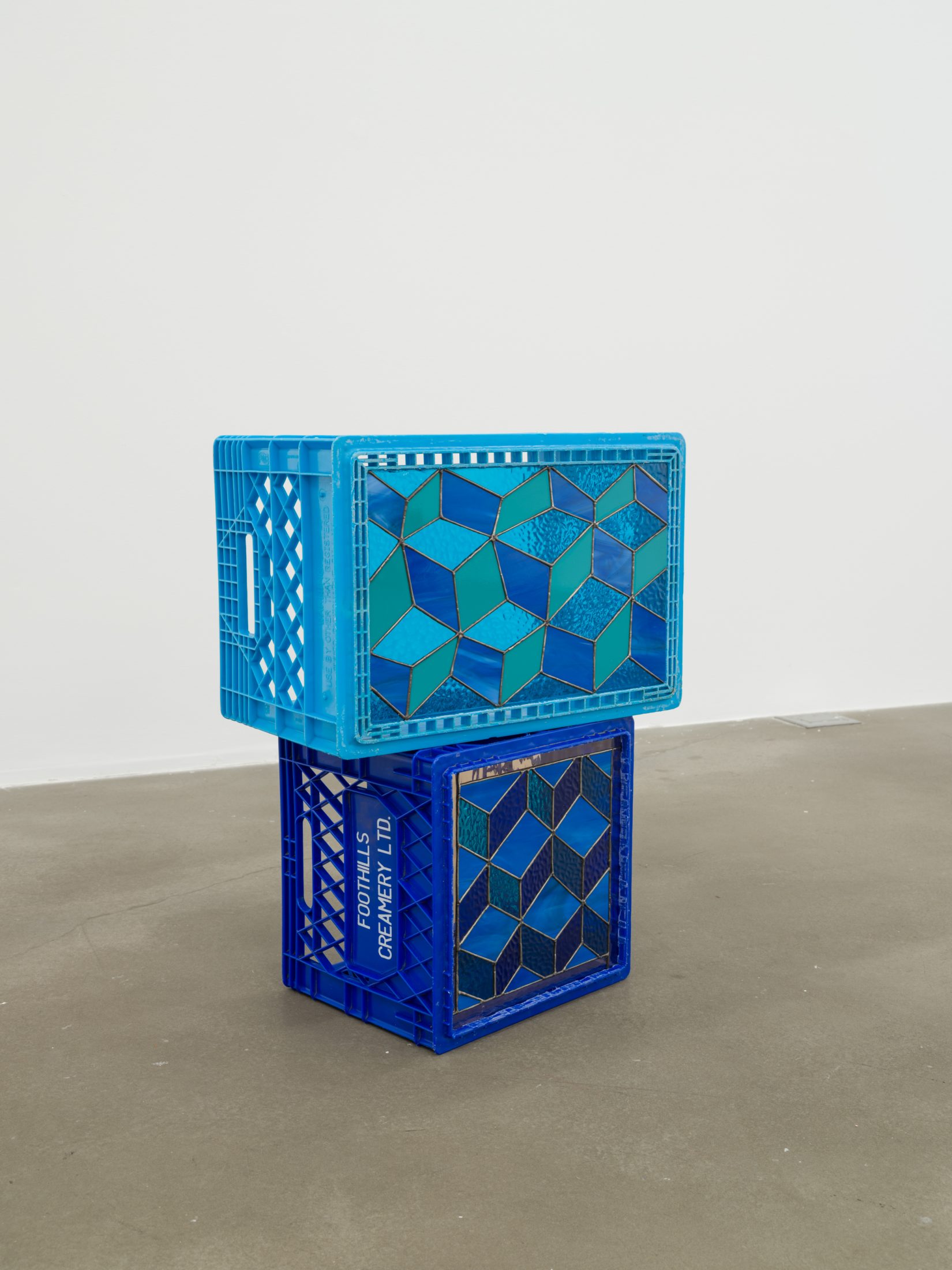 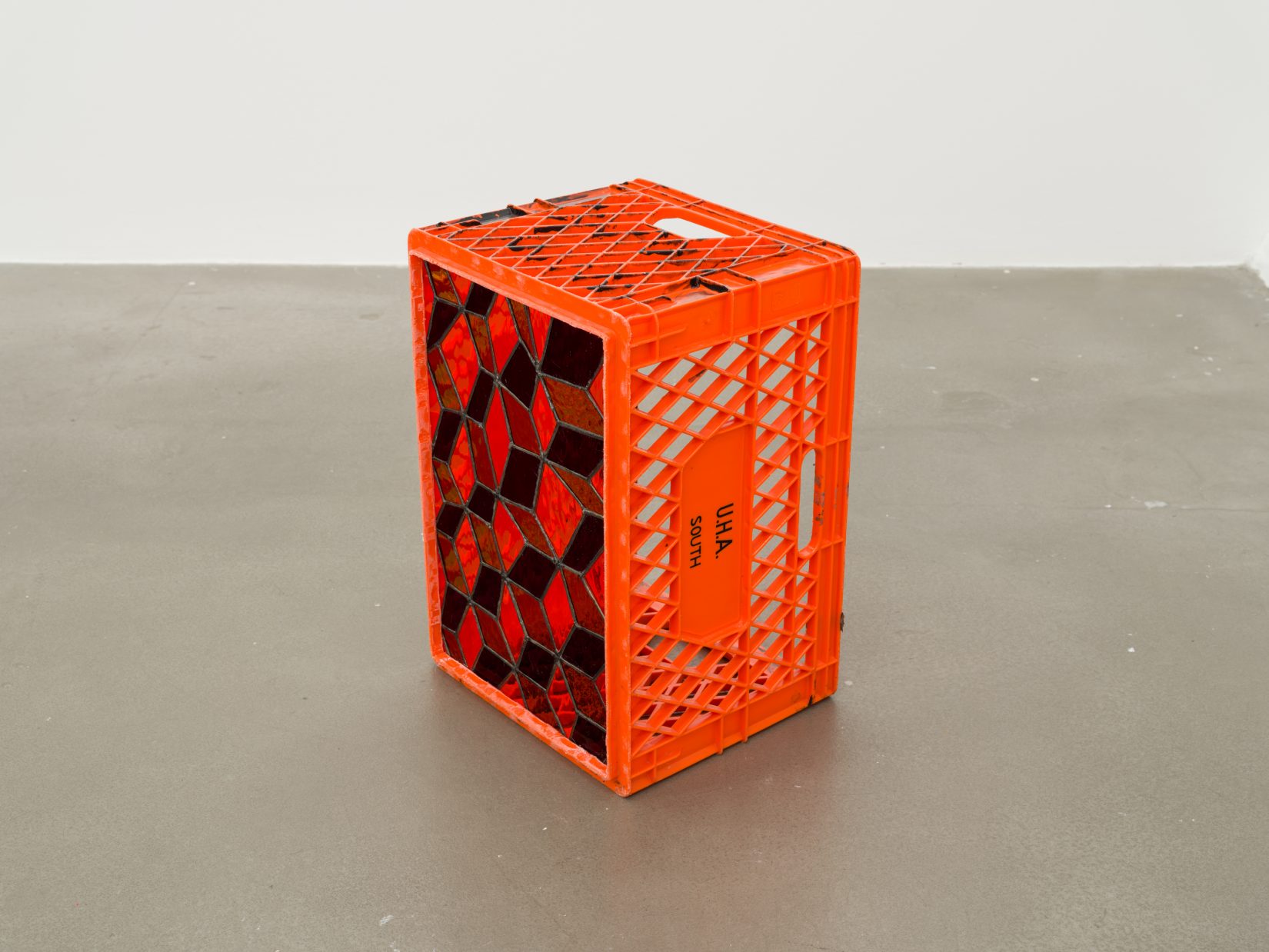 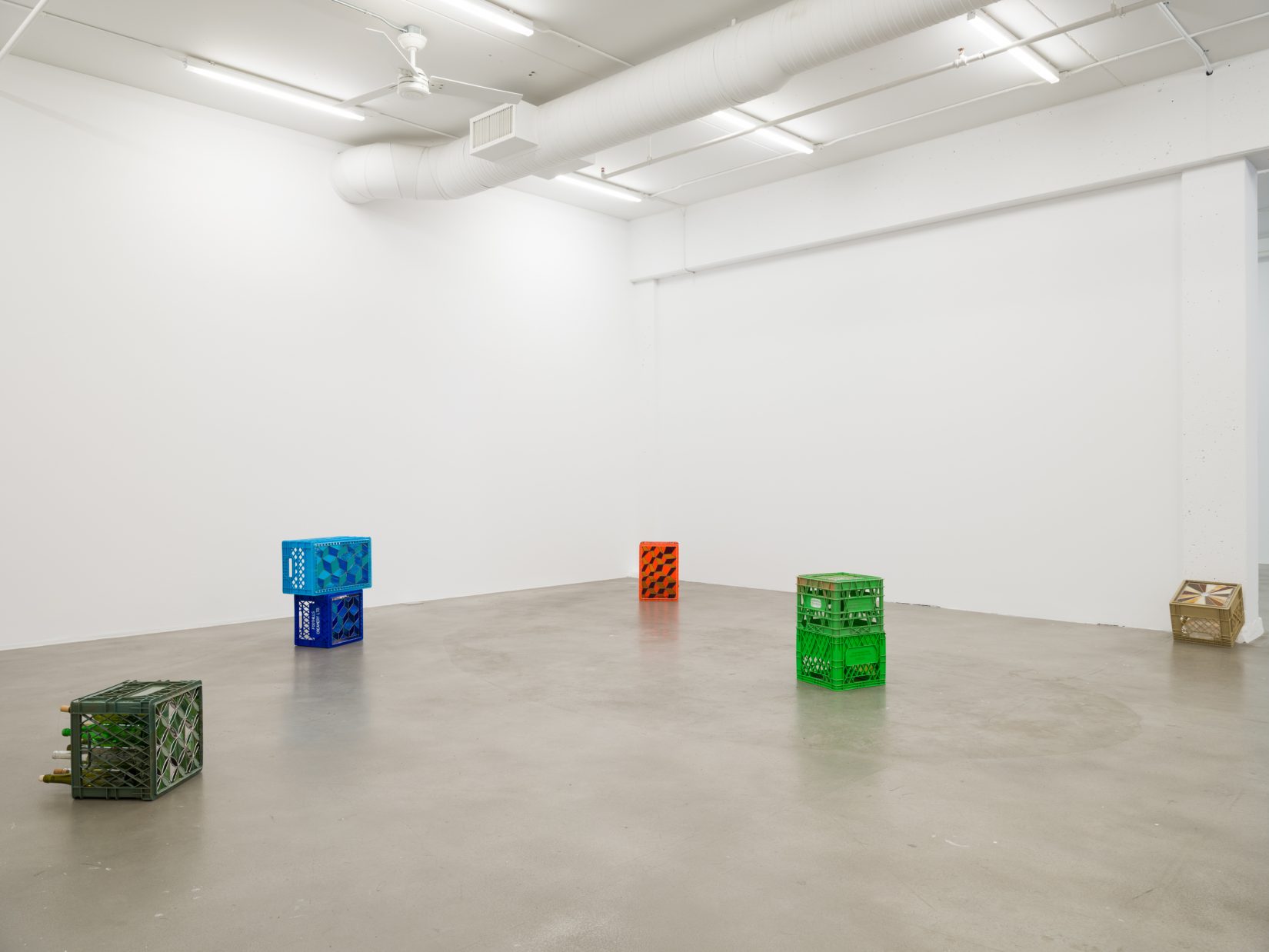 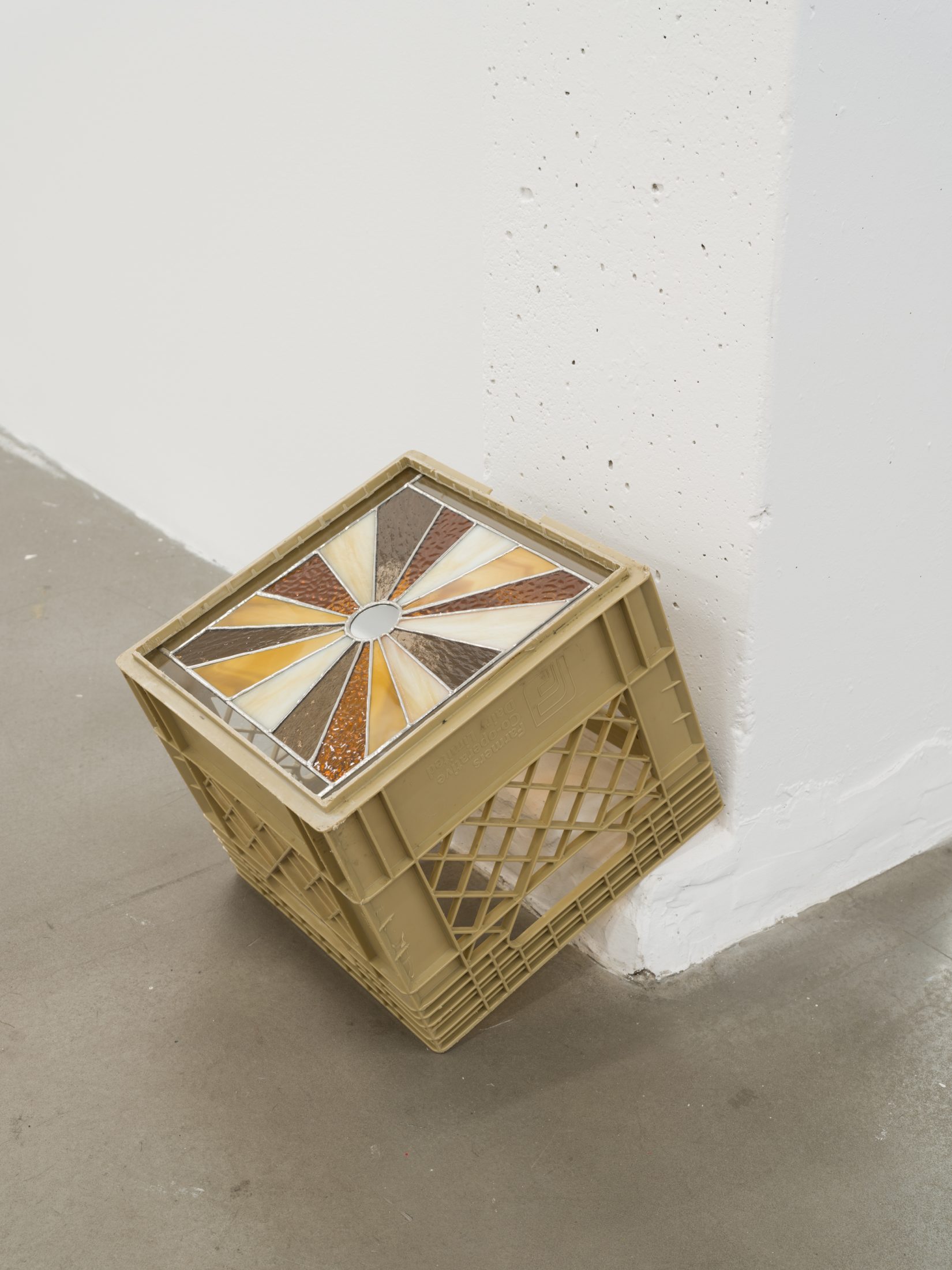 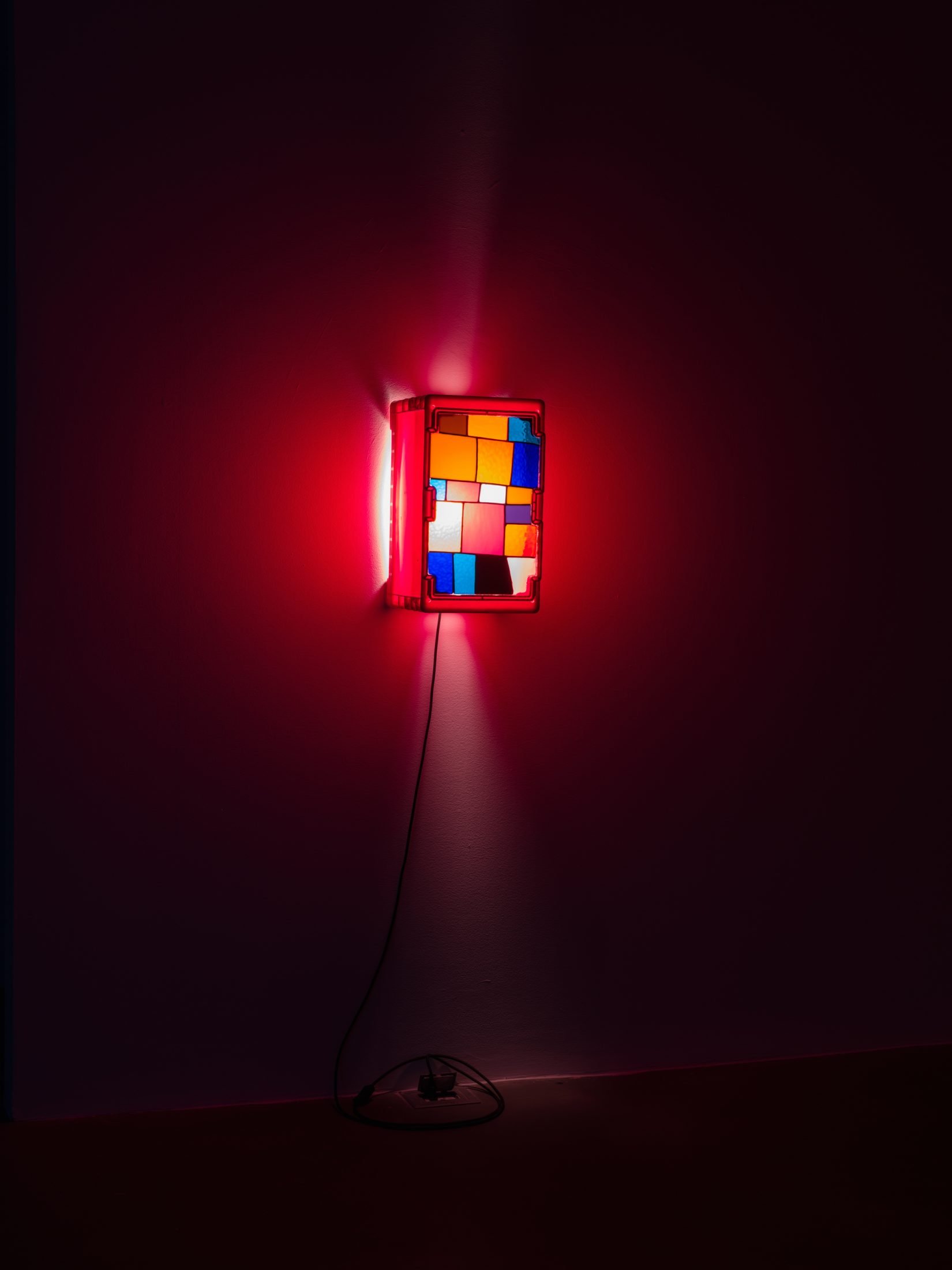 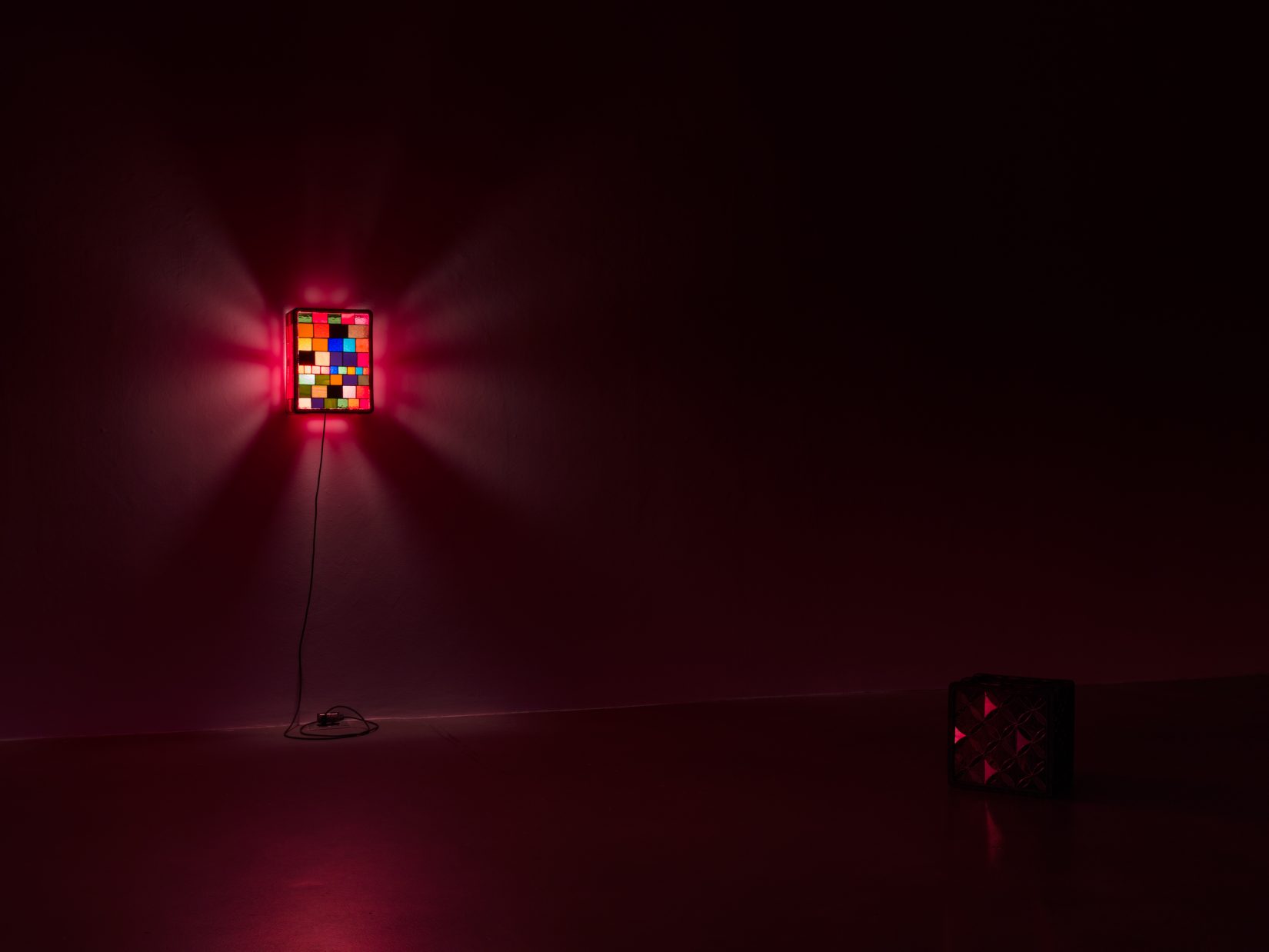 Burrard Arts Foundation presents Tumbling Blocks by Jack Kenna. The exhibition takes its name from an age-old, tessellating pattern of diamond shapes arranged to produce a three-dimensional effect—an illusion of light falling on row upon row of stacked, angled cubes. Known in geometry as rhombille tiling, countless examples bearing the pattern range from ancient floor mosaics to contemporary quilts. Kenna applies the term to a new suite of sculptural works, produced during his winter residency at BAF, that combine found plastic milk crates with abstract compositions in stained glass.

Ubiquitous in North America since the late 1960s, milk crates are square or rectangular interlocking boxes that are used to transport milk and other products. Though steadfast in function, they vary in colour, often corresponding to respective brand identities—locally, for example, Avalon Dairy crates are red, while Dairyland’s crates are lemon yellow. Importantly, the durable crates are also widely repurposed for functions beyond their intended use. They house vinyl records, stack to become shelving, or can be flipped upside down for seating. For artists or students, there is arguably no better accessory to accommodate frequent shifts between scarce rental spaces. The sculptures in Tumbling Blocks evolved from an earlier work that transformed a found crate into a makeshift chandelier, with Kenna using caulking to secure cut glass scraps into each plastic void, like a Tiffany-style lampshade.

For Kenna, a longstanding fascination with milk crates has heightened his awareness to their subtle shifts in latticework. His ornate stained glass panels juxtapose these seemingly utilitarian designs, emphasizing and responding to their geometric grids through mimicry and contrast. The two materials, heavy-duty polyethylene and coloured glass, can appear incongruous to each other in the gallery setting. We as viewers have a sense for how each surface would bounce or break on the concrete floor. Yet, examples of functional pairings of glass and plastic are commonplace—think of mayonnaise jars, hot sauce bottles, or glass tupperware. This series, like much of Kenna’s prolific and varied output, including drawings, paintings and ceramics, is exceedingly clever. The exhibition highlights a material relationship we were aware of but hadn’t entirely noticed.

Tumbling Blocks also speaks to artistic lineage and inherited ways of seeing. Jack Kenna’s mother, Janet Kenna, who he is quick to credit as an artistic mentor, is an accomplished stained glass artist. She contextualizes her own glass practice as informed by her many years of quilting fabrics, encompassing a similar convening of colour and shape. Though the glass panels in Jack’s sculptures can be seen as responding to the designs of their respective crates, it is plausible that his many years of collecting these adaptable boxes was itself preceded and influenced by his mother’s example and methodology—her affinity for patterning, seriality and saturated hues.