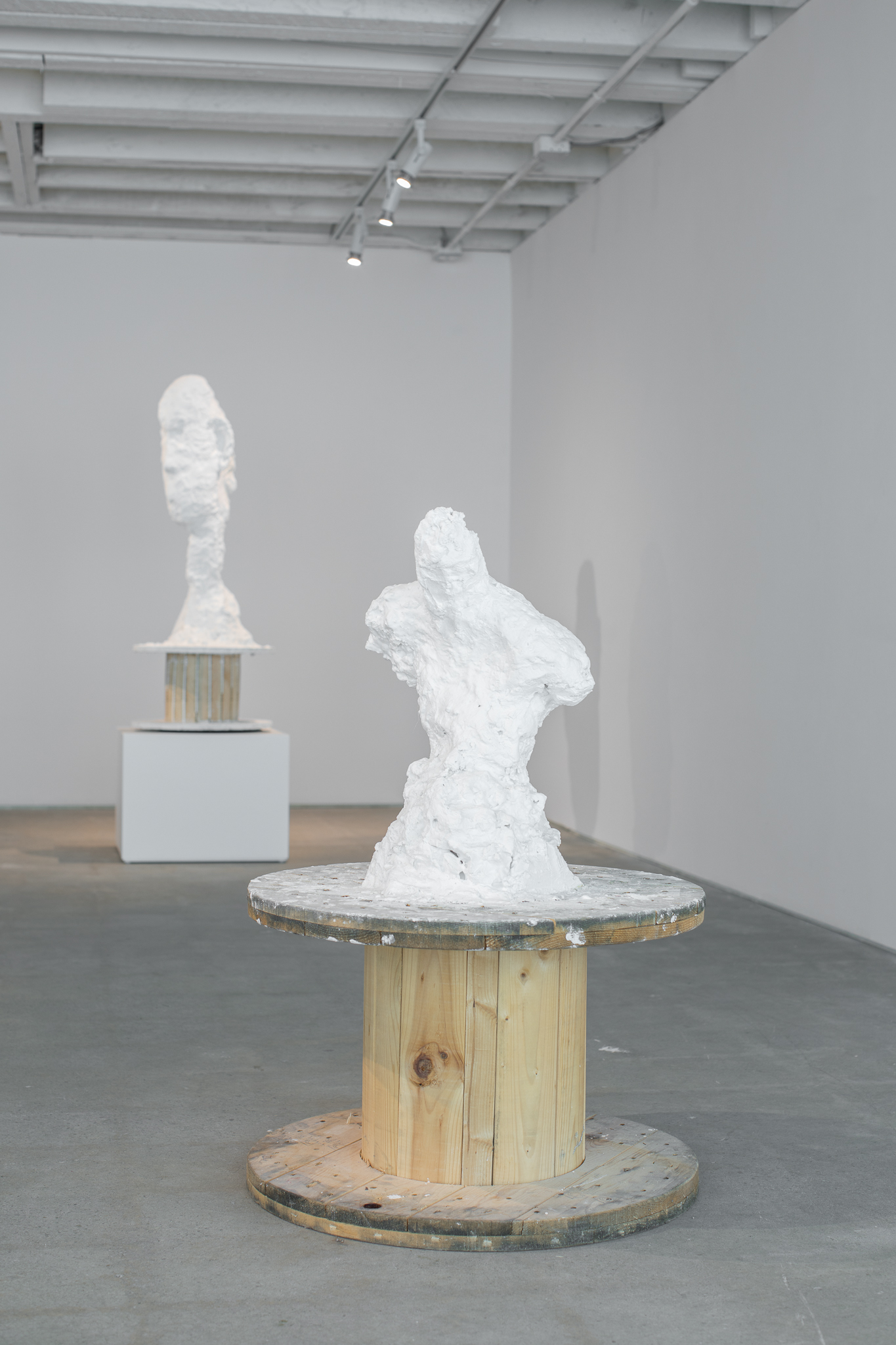 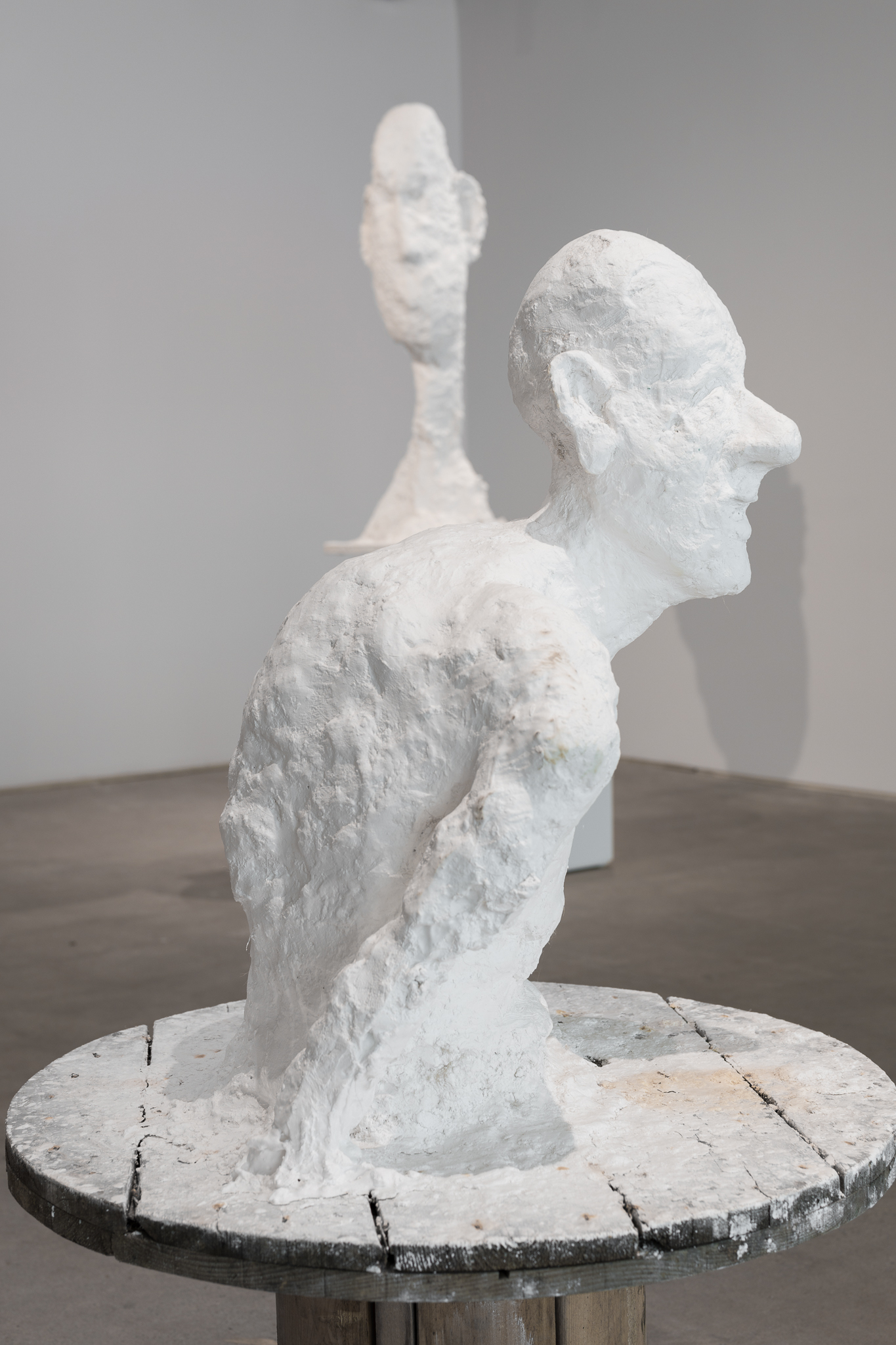 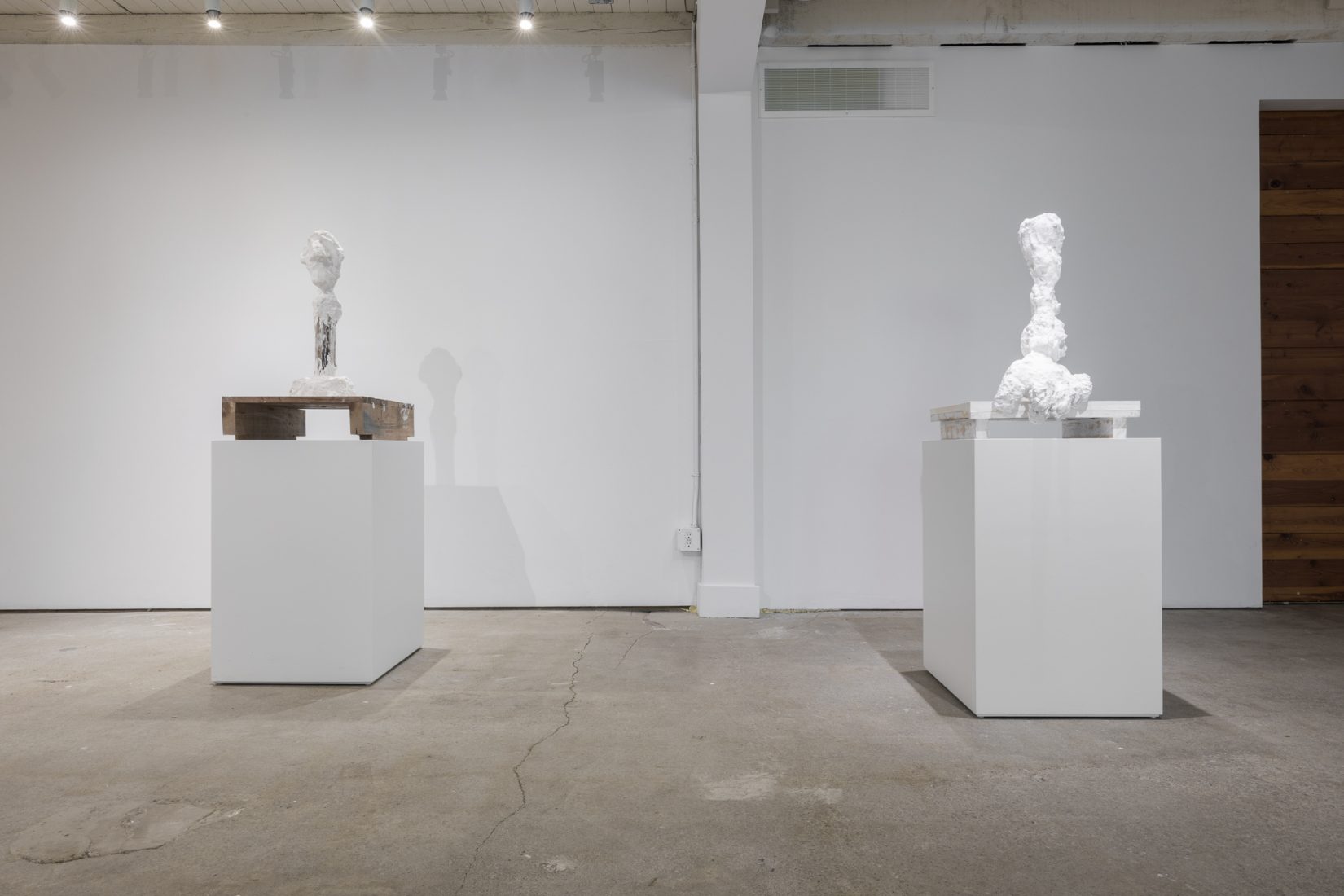 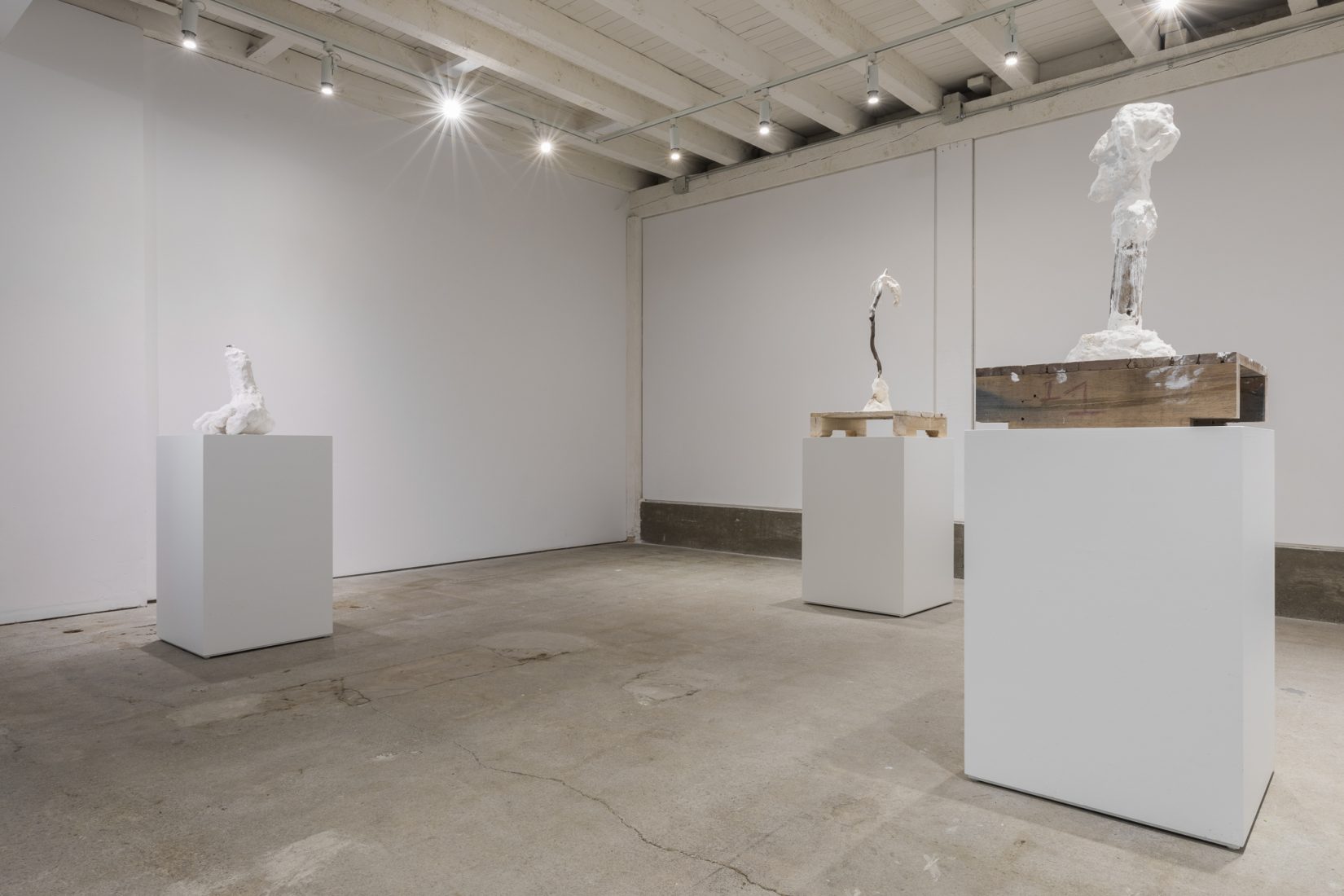 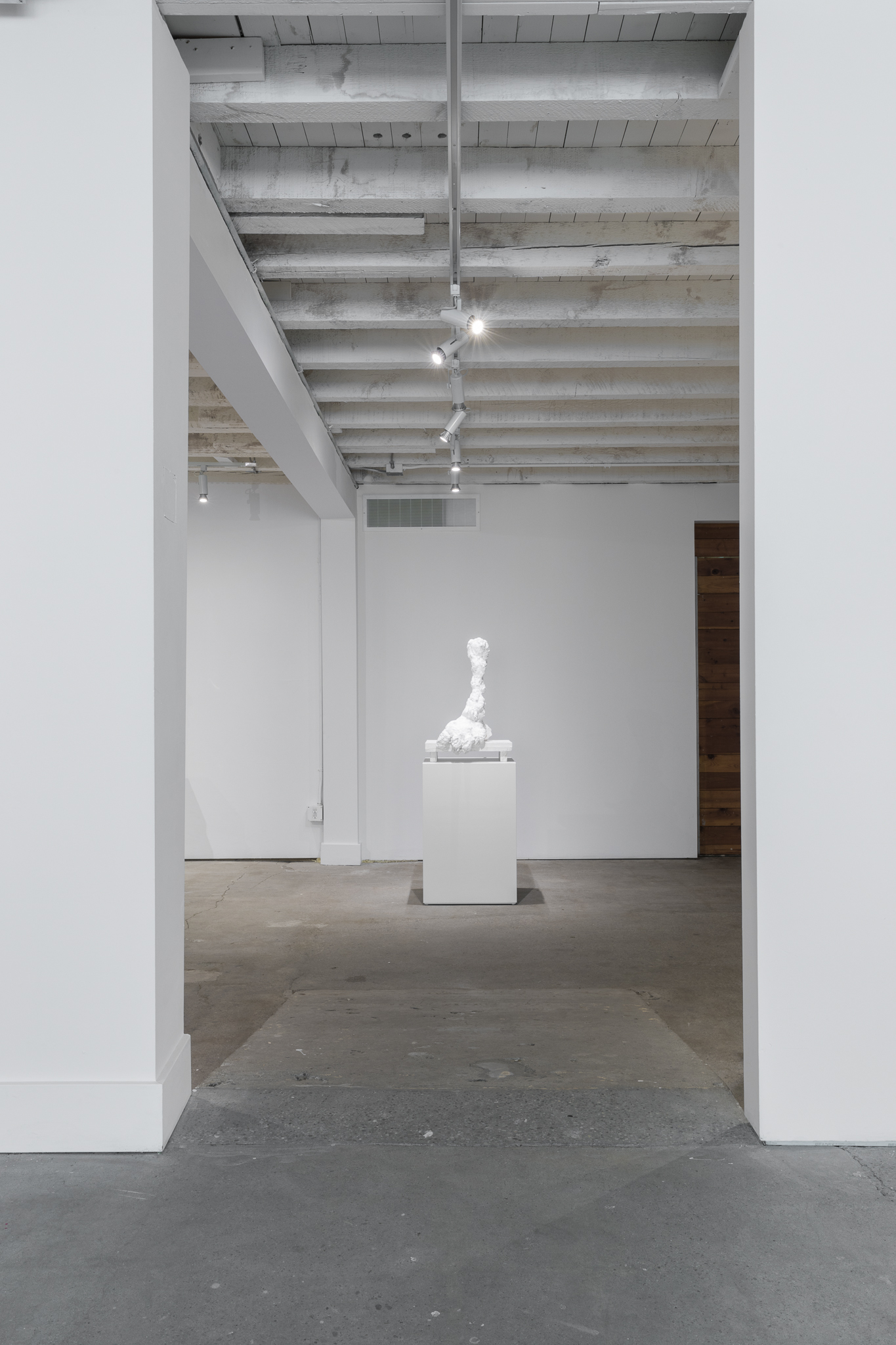 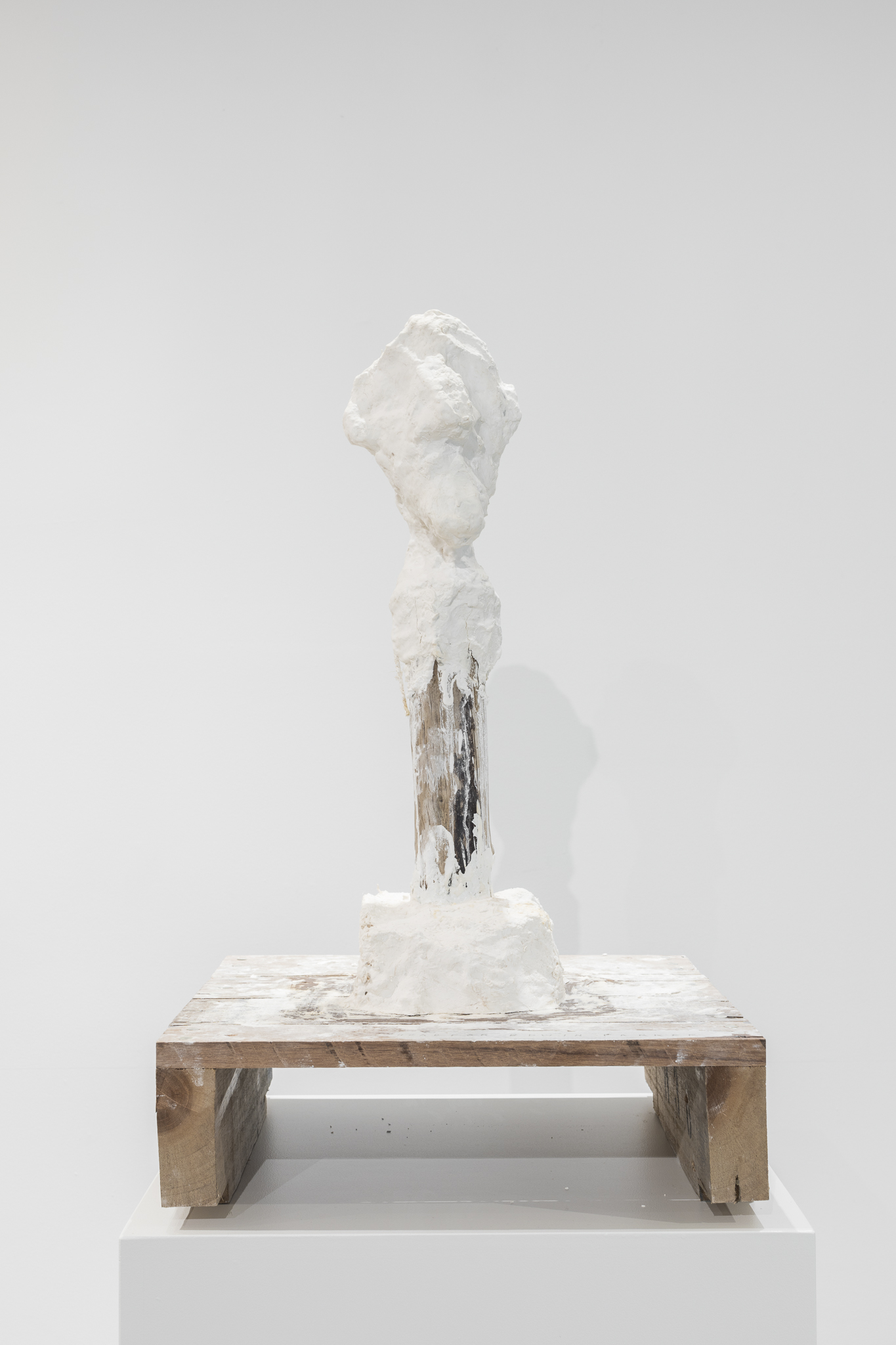 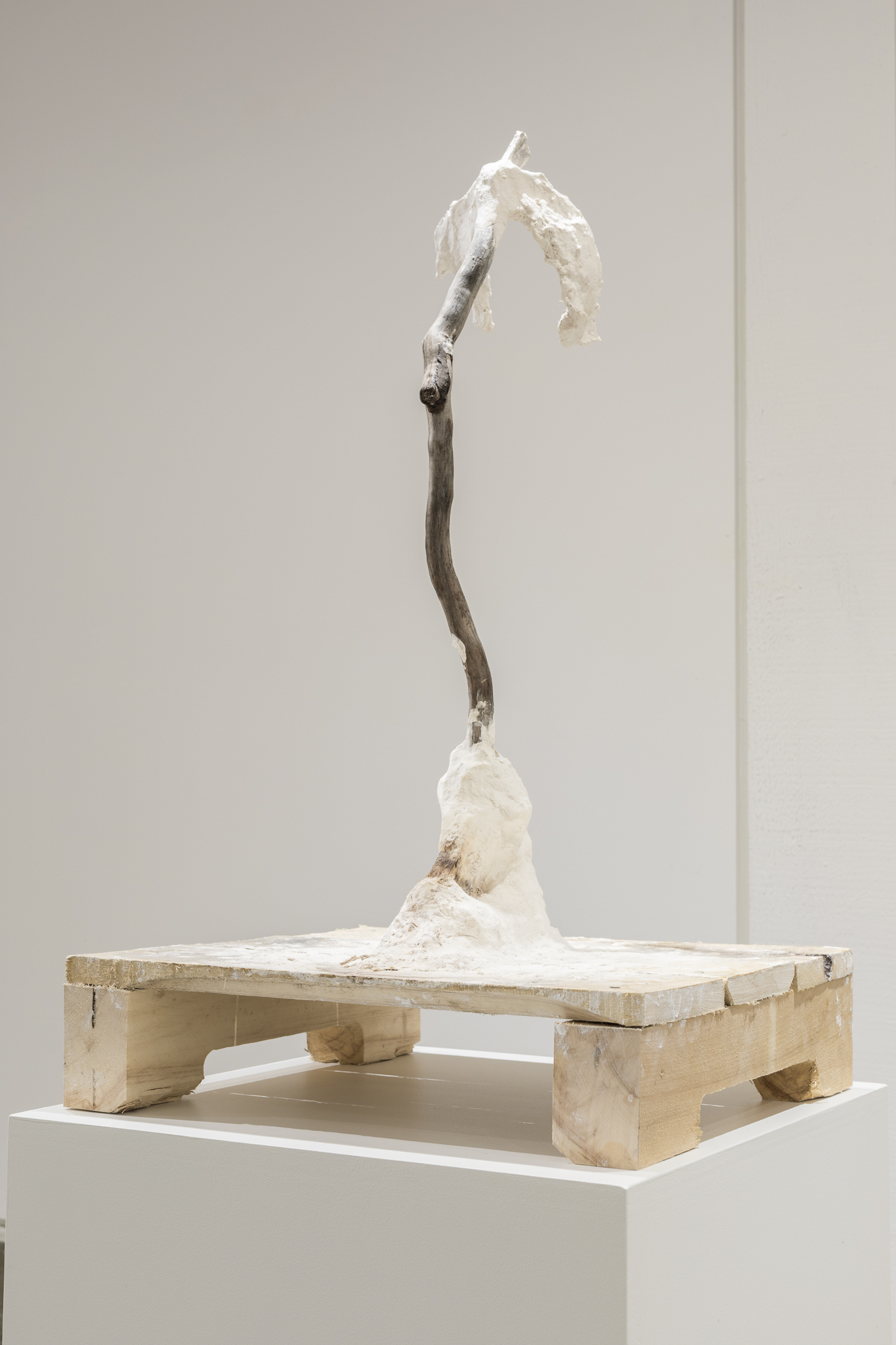 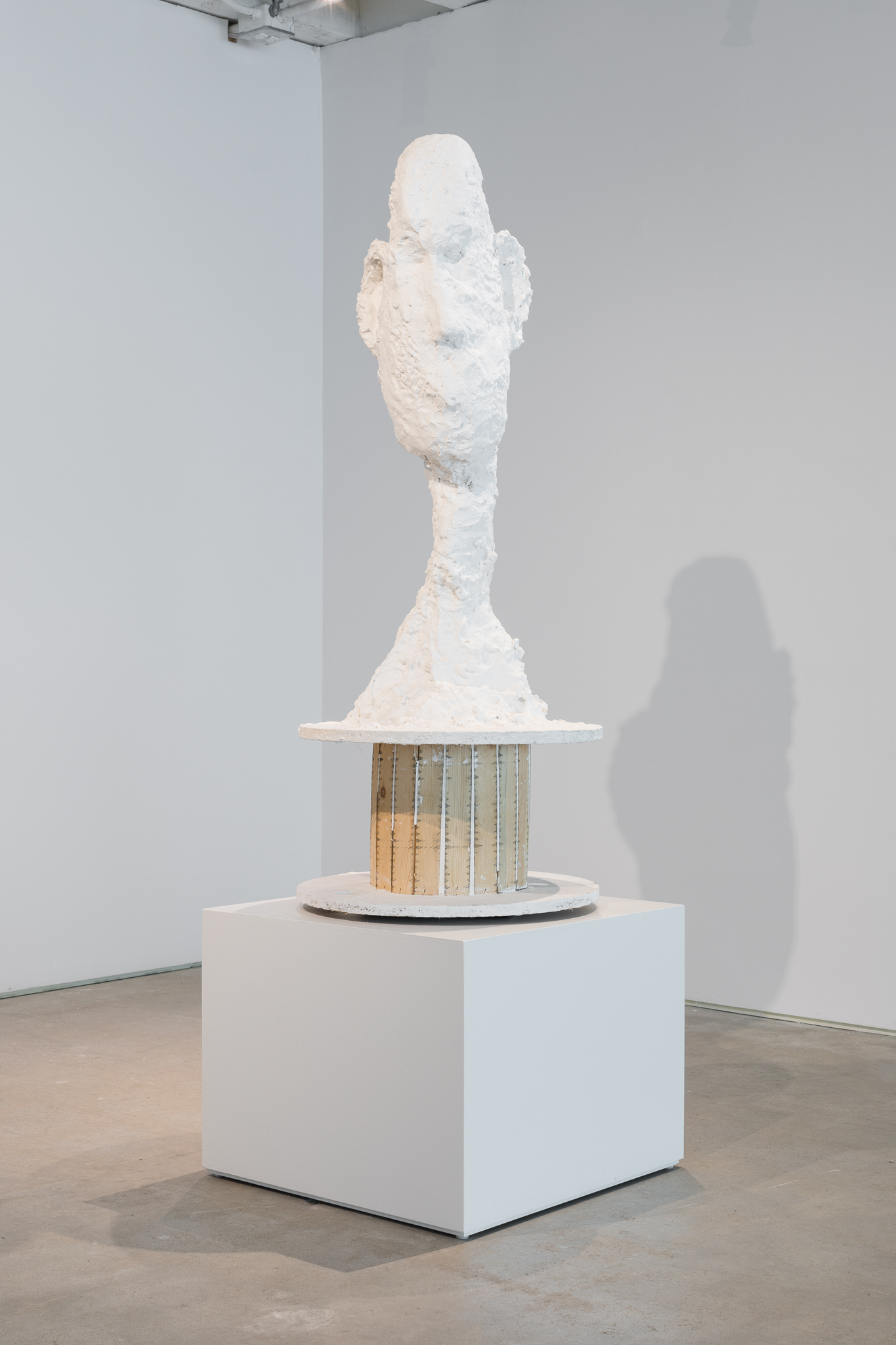 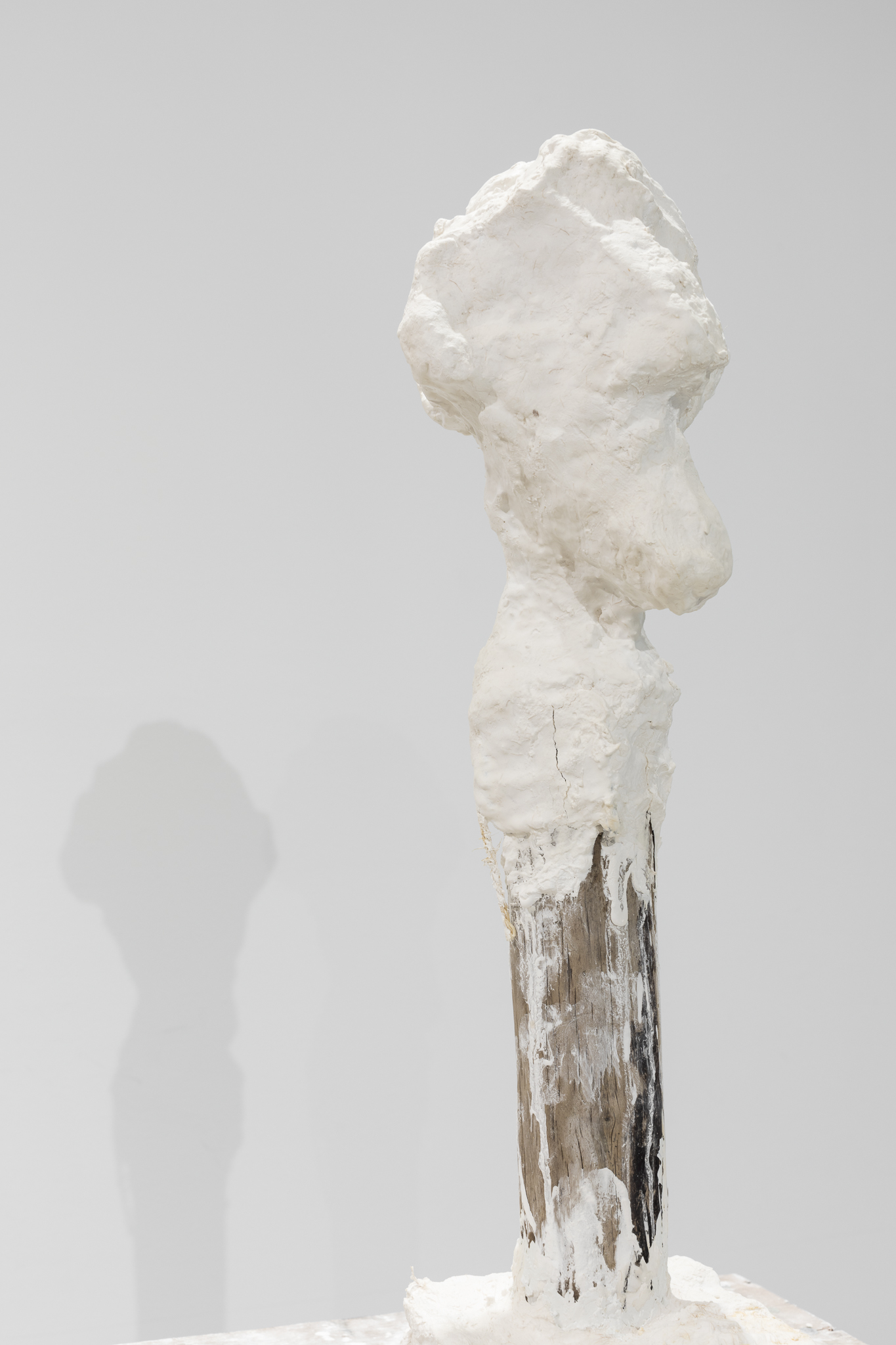 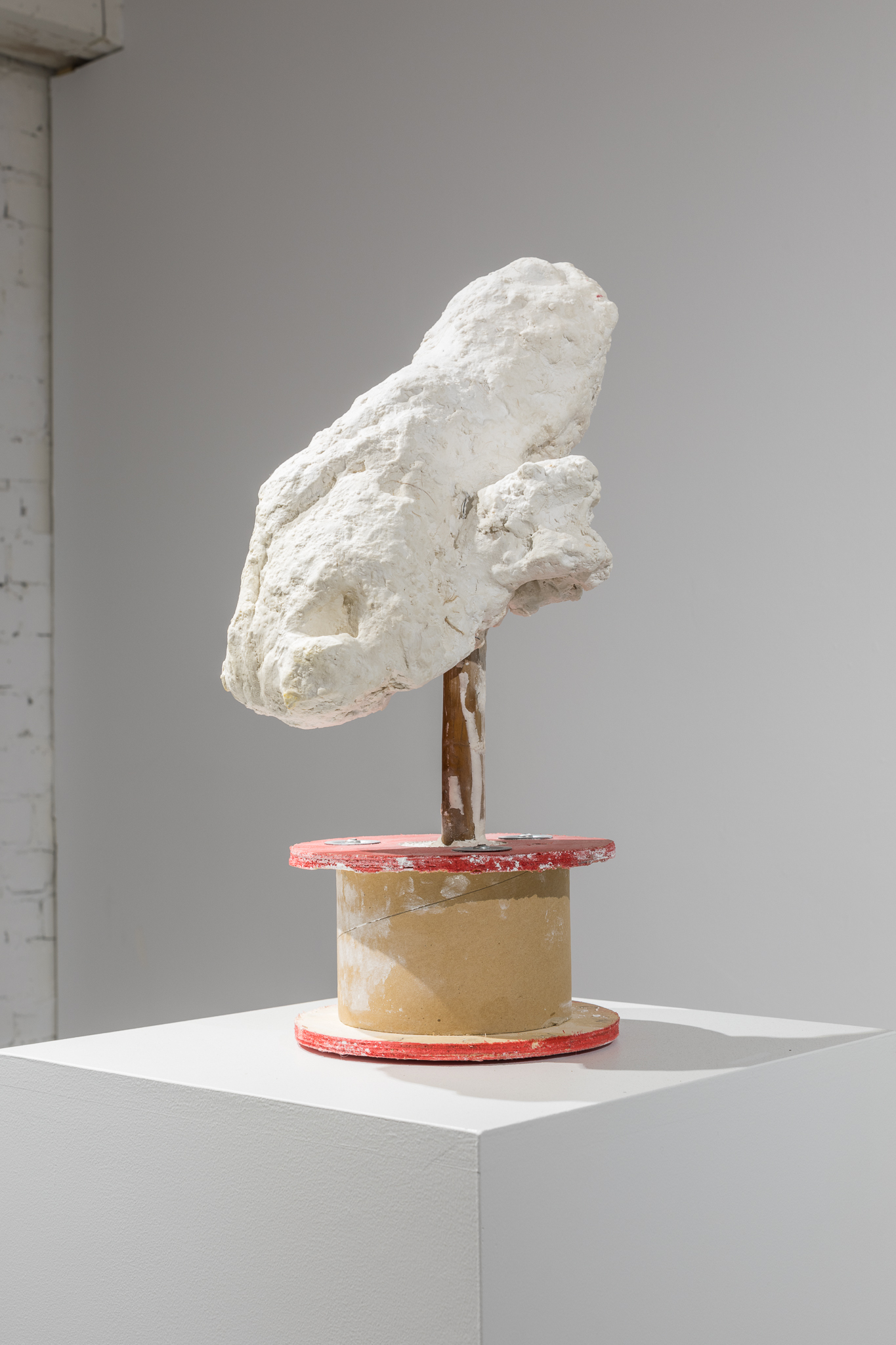 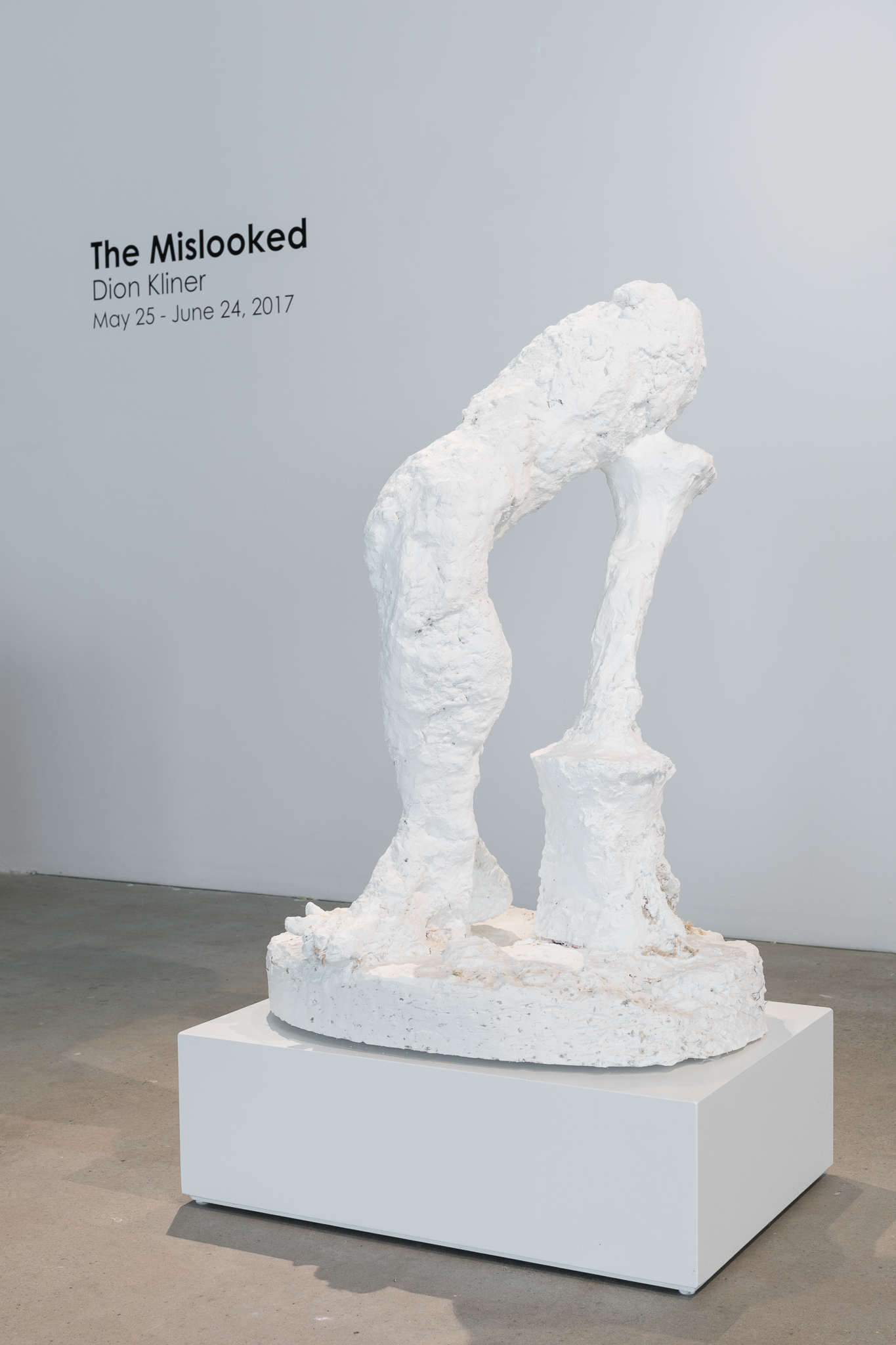 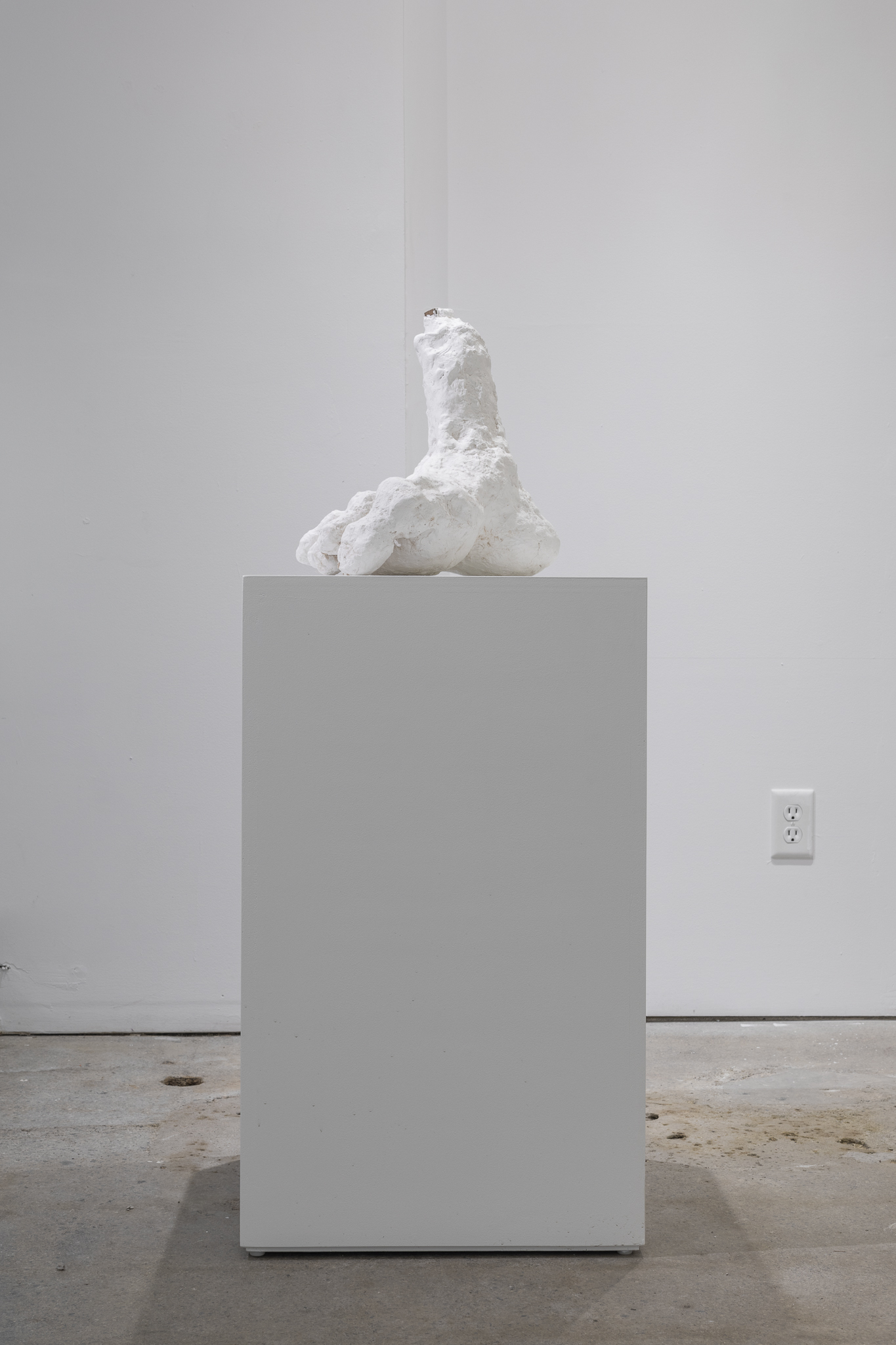 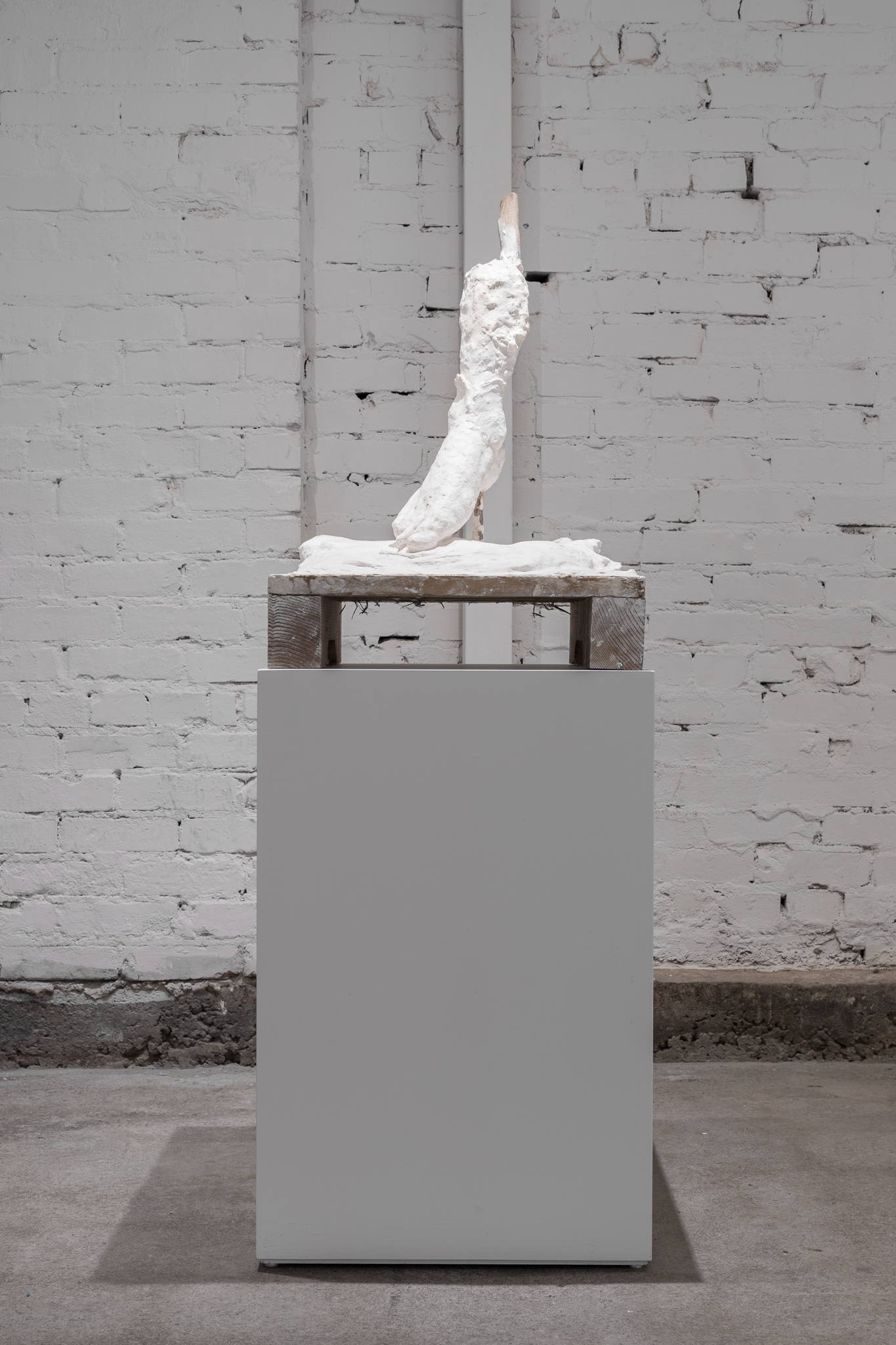 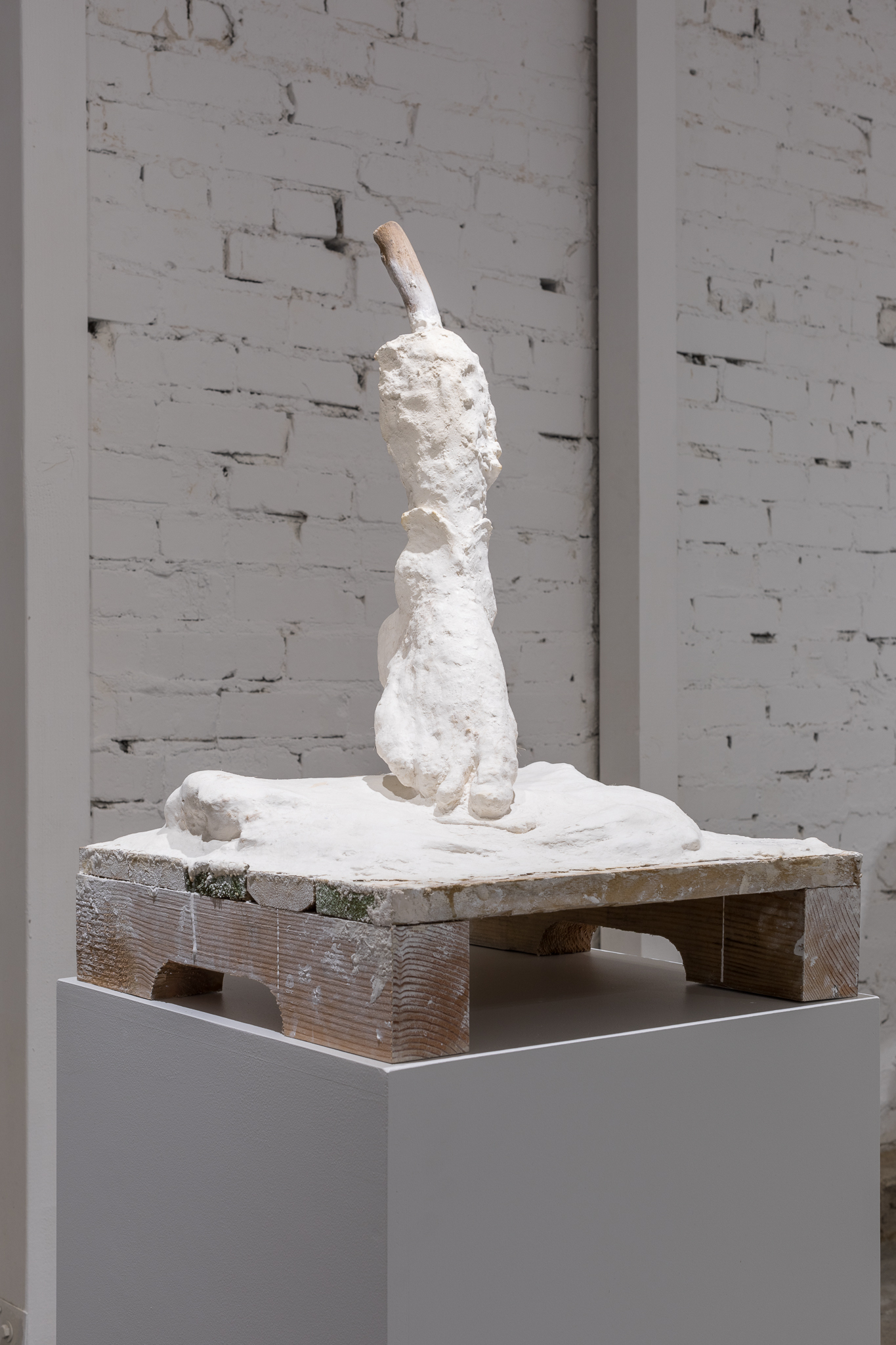 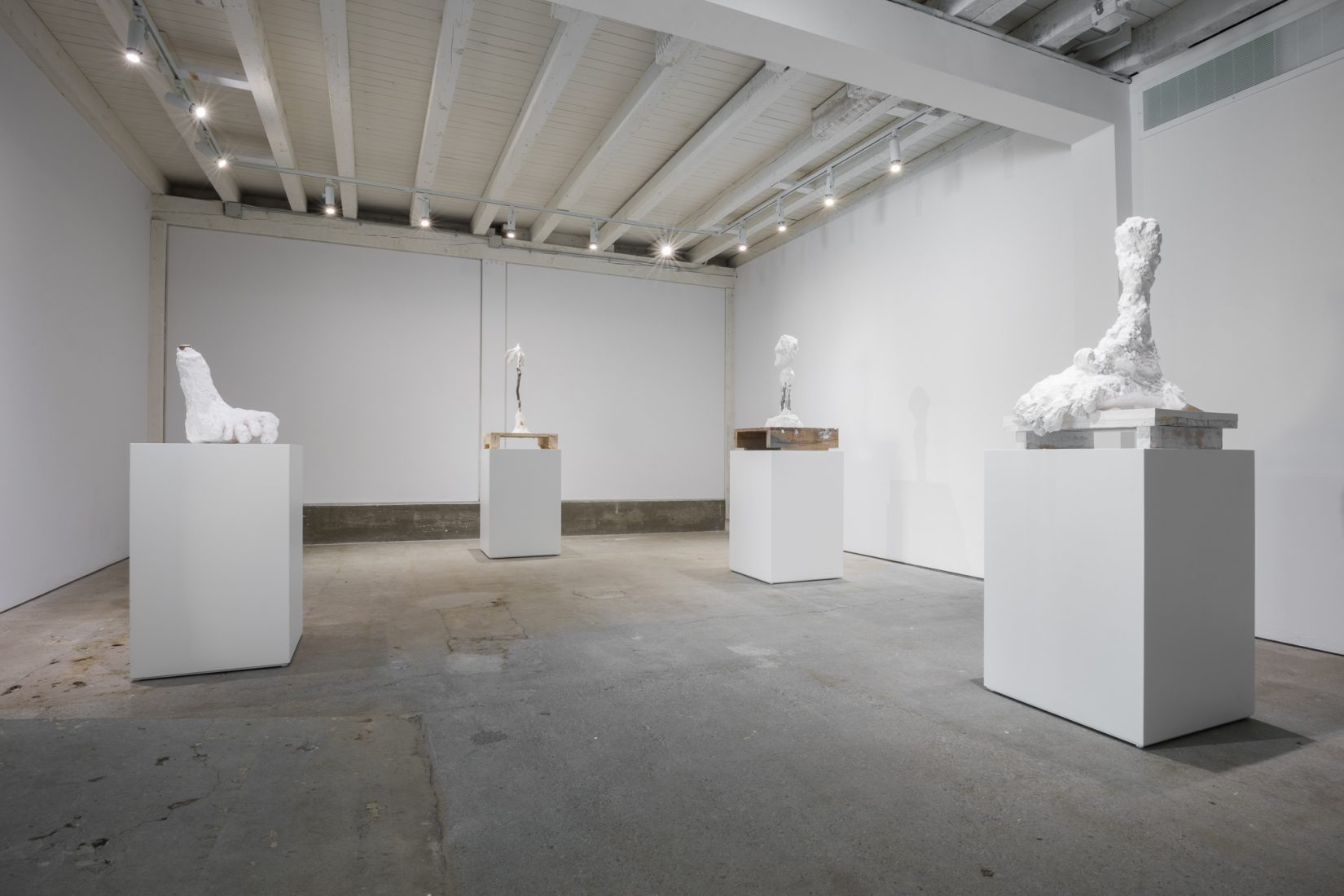 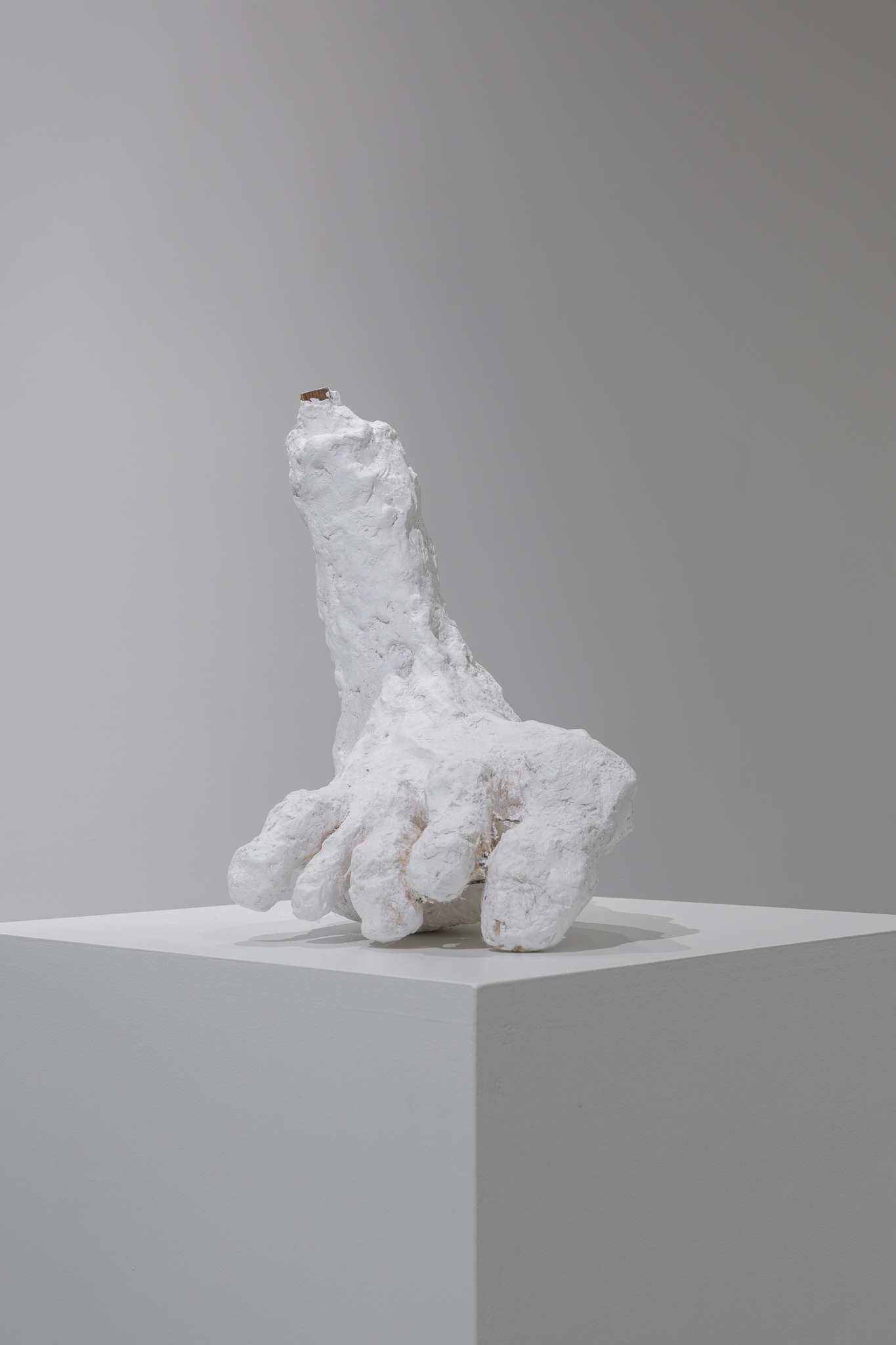 Dion Kliner has long been fascinated by bodily forms typically considered unsightly. His sculptures evoke corporeality at its most damaged, crooked, twisted, broken, and bumpy, often presenting the body in fragments rather than as a unified whole: a distorted face, a club foot, a misshapen limb. Roughly moulded by hand in plaster – whose surface is pitted and pocked with Kliner’s fingerprints – these are clearly not the heroic, muscled bodies of Classical Greek and Roman warriors and athletes, rendered in polished marble. Rather, they embody what Kliner terms an “aesthetics of asymmetry.” He writes: “While classical sculpture is usually smooth and anatomically ‘correct,’ mine is lumpy, and asymmetrical; physical metaphors to suggest the idea of alternatives (personal, social, economic, political) to dominant cultural assumptions.”

Kliner’s exhibition title The Mislooked calls to mind individuals typically ignored and made invisible due to their physically disfigured or socially marginalized status. Considering his work within a broader context of fear and denigration of the Other, he explains: “I think difference is usually treated hostilely as a wound of some kind; being wounded represents a weakness, and the result is being outcast. Conversely, difference is often considered threatening to the cohesion of a group, with the same result of being outcast.”

Uninterested in the noble archetypes or what he describes as the “anonymous, impersonal subject” so revered in classical western sculpture, Kliner’s works are redolent with explicit evocations of European literature and art – everything from Goya’s Black Paintings and Rodin’s The Burghers of Calais to nineteenth-century realist novels by Balzac and Dostoevsky to Giacometti’s elongated bronze figures, the expressionist works of Chaim Soutine, and Frances Bacon’s paintings whose subjects are rendered in a style approaching abstraction. His titles, crudely written in capital letters directly onto the sculptures, tell stories too, often of iconic antiheroes: BGF (aka the Big Friendly Giant), THE HUNCHBACK, THE IDIOT.

Kliner’s focus on the “mislooked” is also manifest in his predilection for utilizing devalued materials that are discarded as garbage. For his sculptures, he concocts a unique mix of plaster and recycled paper pulp. The resulting thick paste remains moist and malleable for a prolonged period, enabling him to employ this doctored plaster as a sturdy sculptural material that he can build with. He reinforces the structural skeleton of his sculptures with found tree branches, which protrude from the plaster like broken bones, and with old burlap, whose tufts of thread penetrate the white surface like hair. Kliner sculpts his roughly hewn forms directly on equally unrefined supports of reclaimed wooden pallets and industrial wire spools. Spattered with dried plaster à la Jackson Pollock, these crude makeshift “plinths” – onto which his sculptures are adhered – display the messy traces of his sculptural process.

Paying homage to a history of homely figures, Dion Kliner’s sculptures function as metonymic monuments to those habitually rejected or relegated to the margins. Rendered in plaster that is both fragile and fortified, the works in The Mislooked asserts the secret beauty of the outsider.