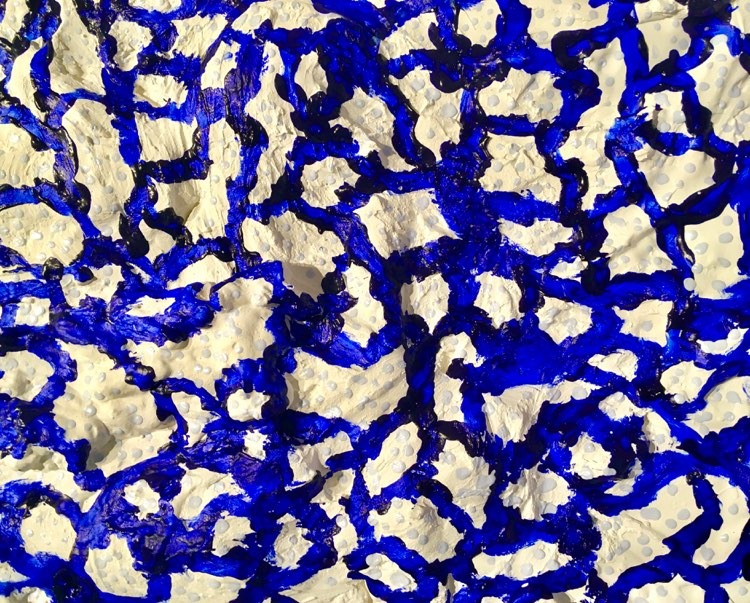 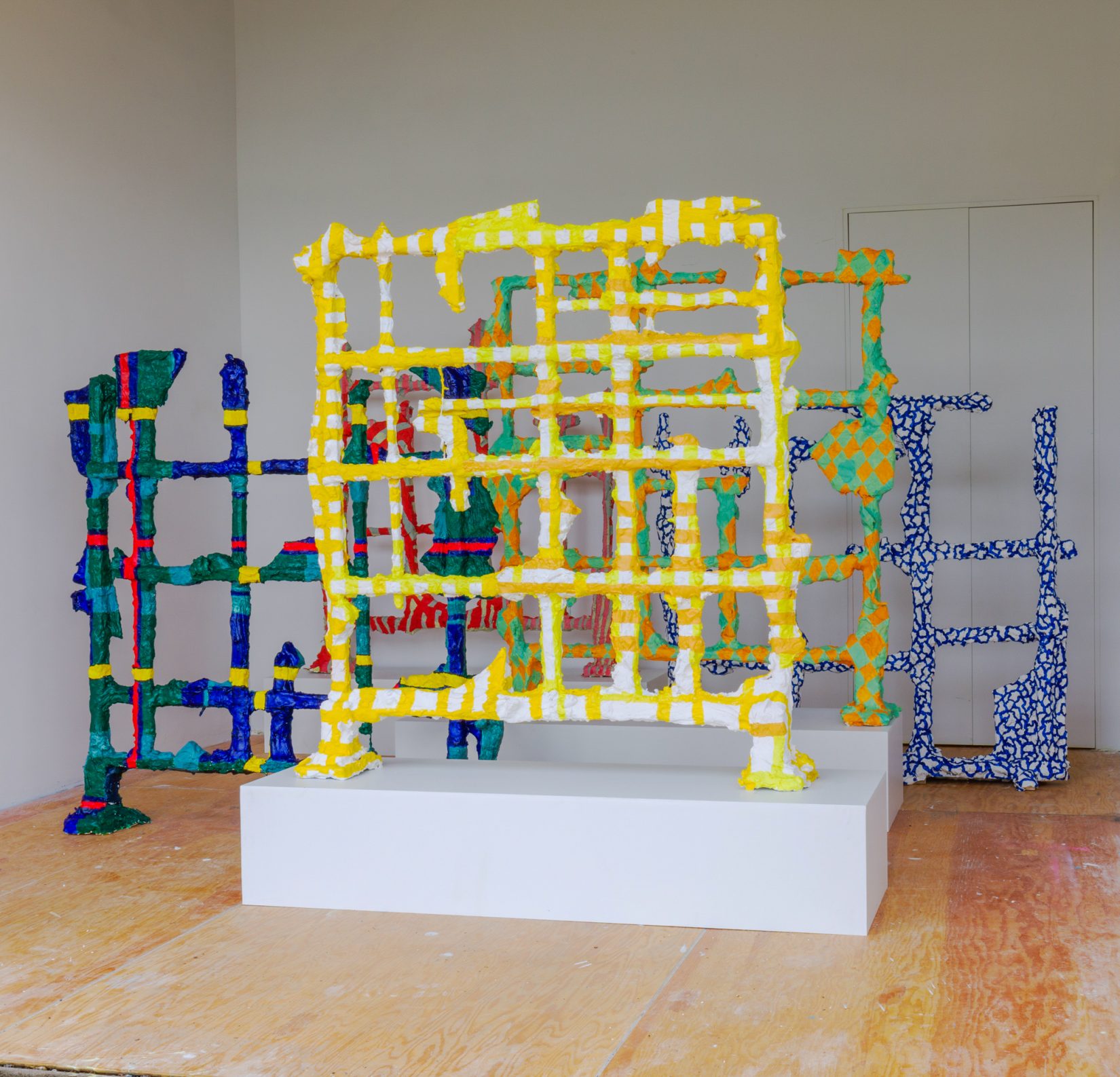 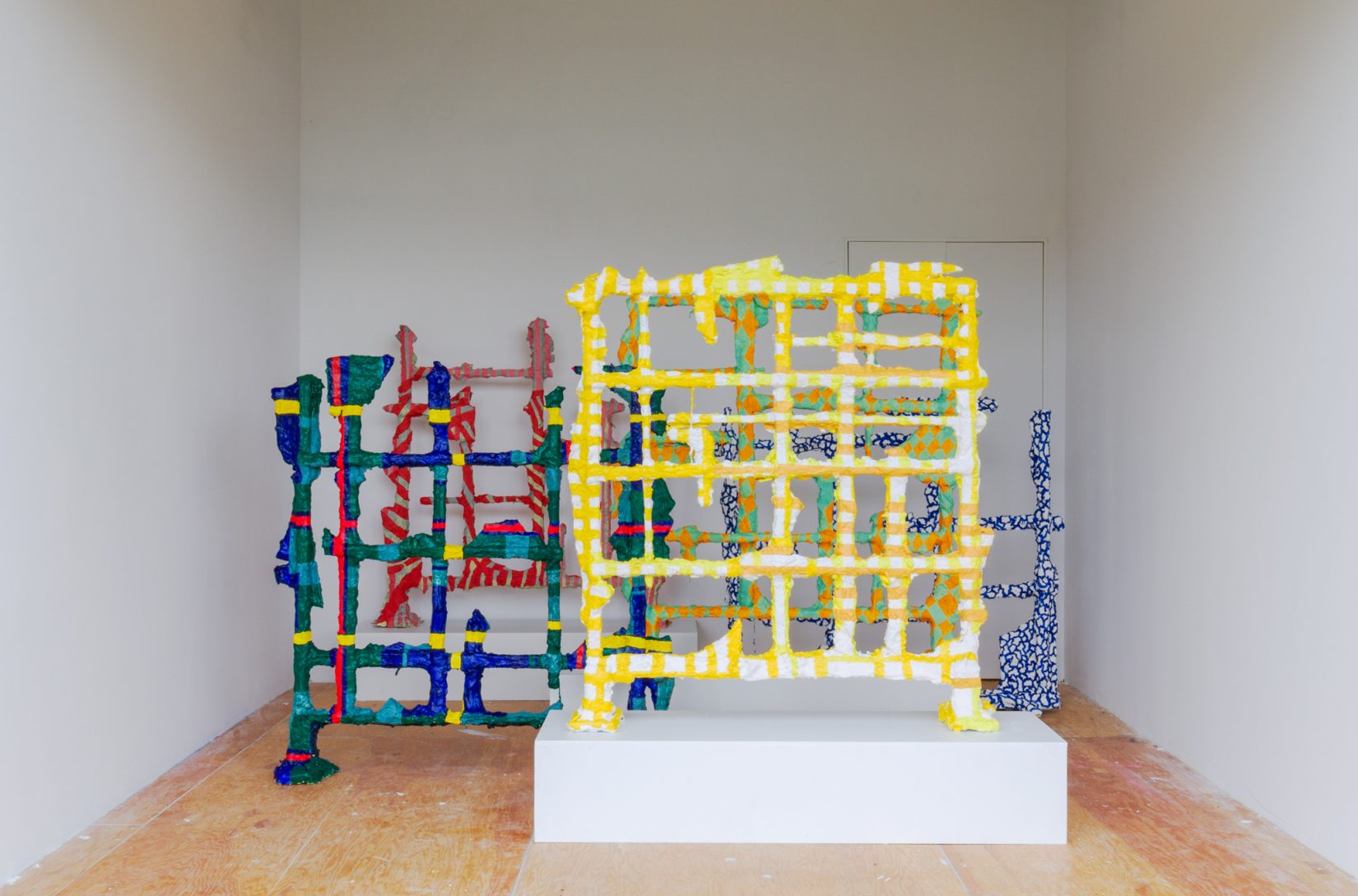 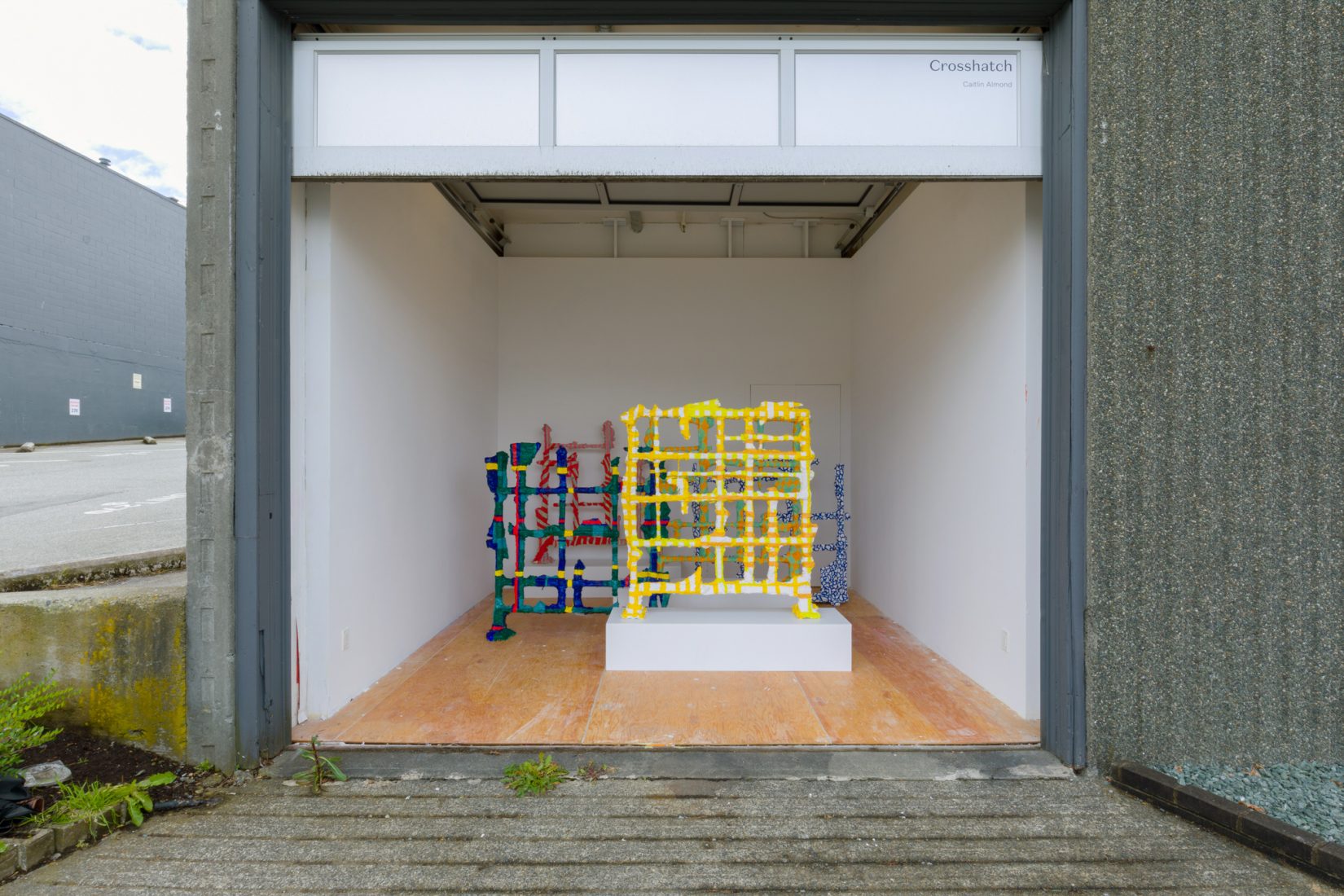 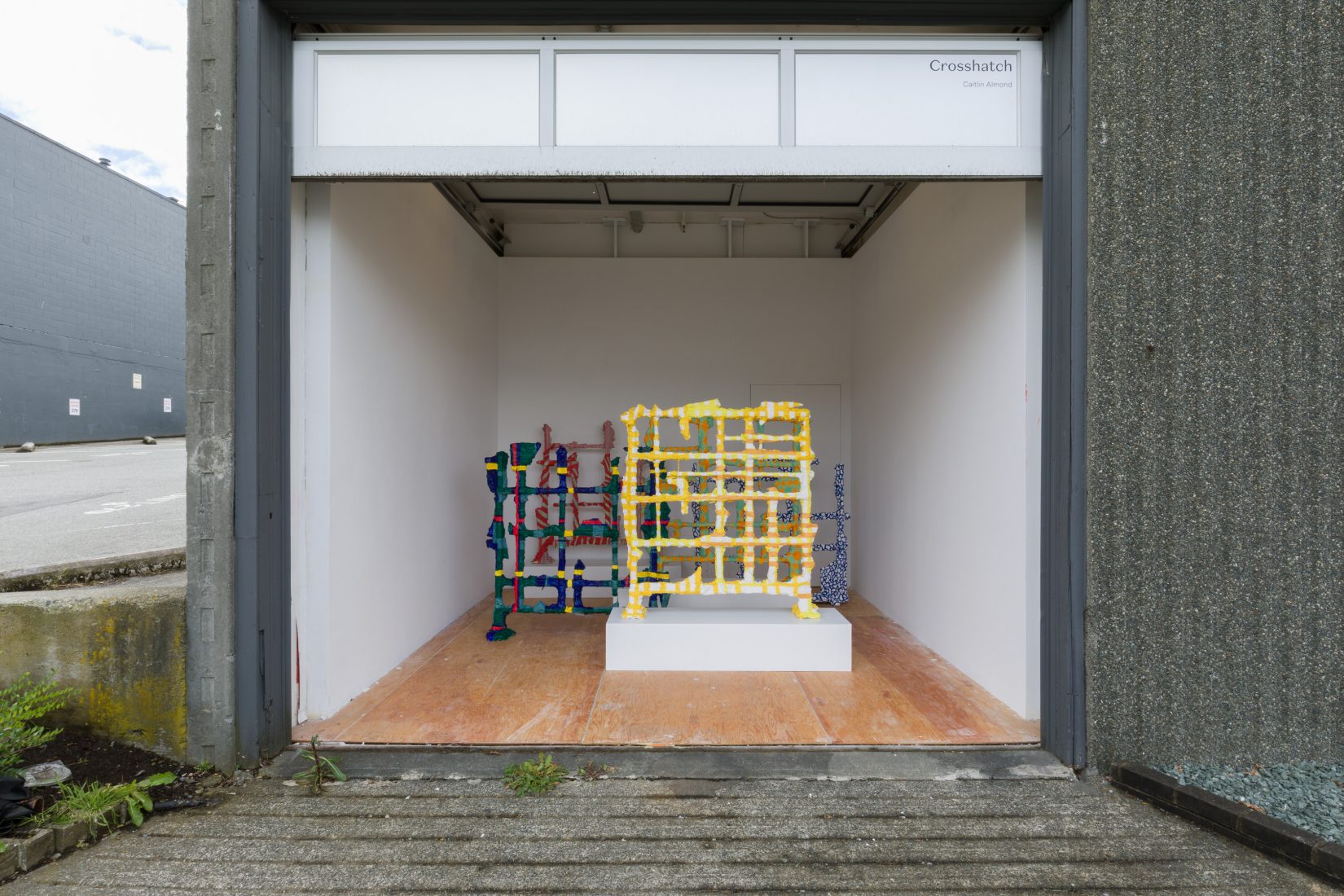 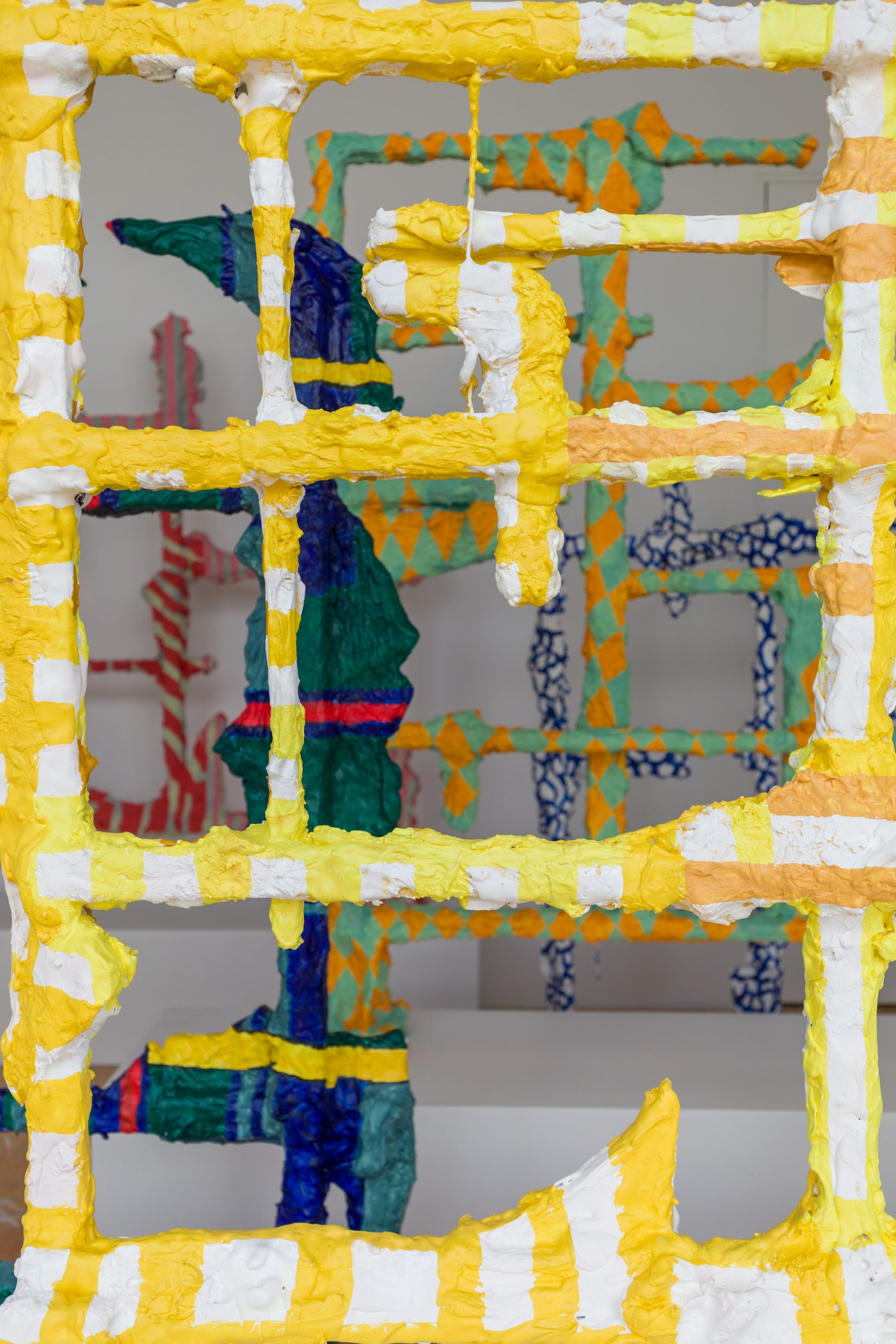 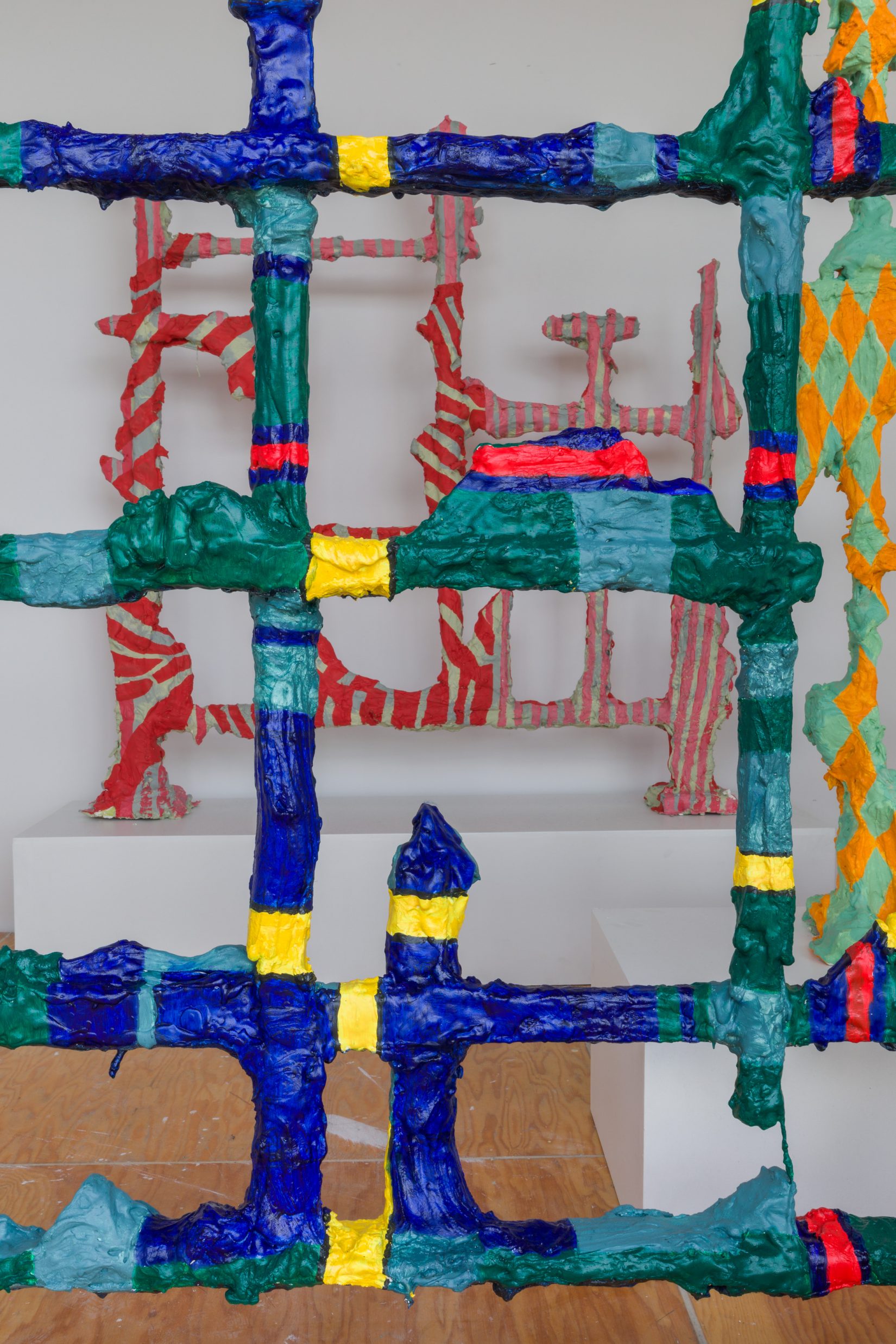 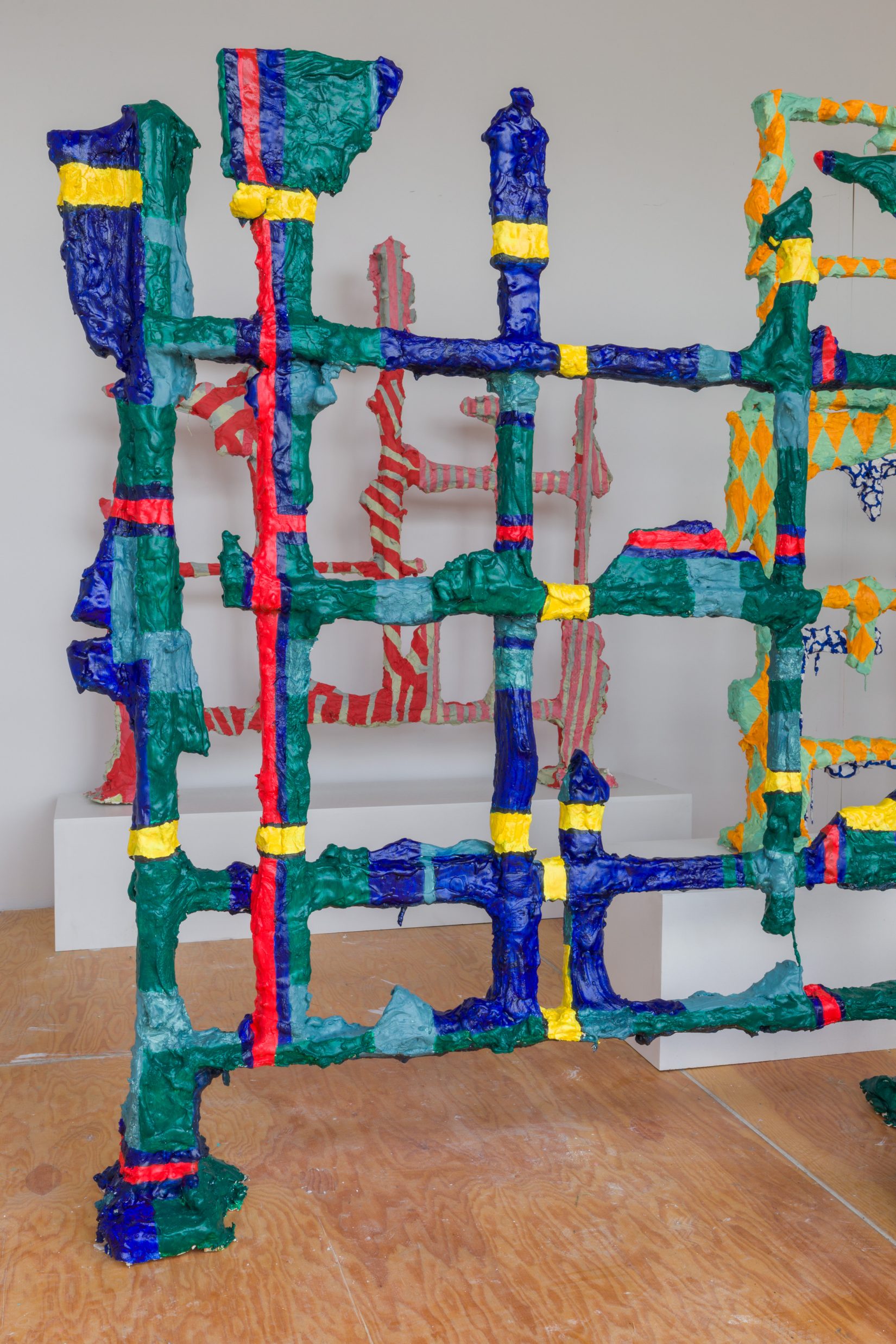 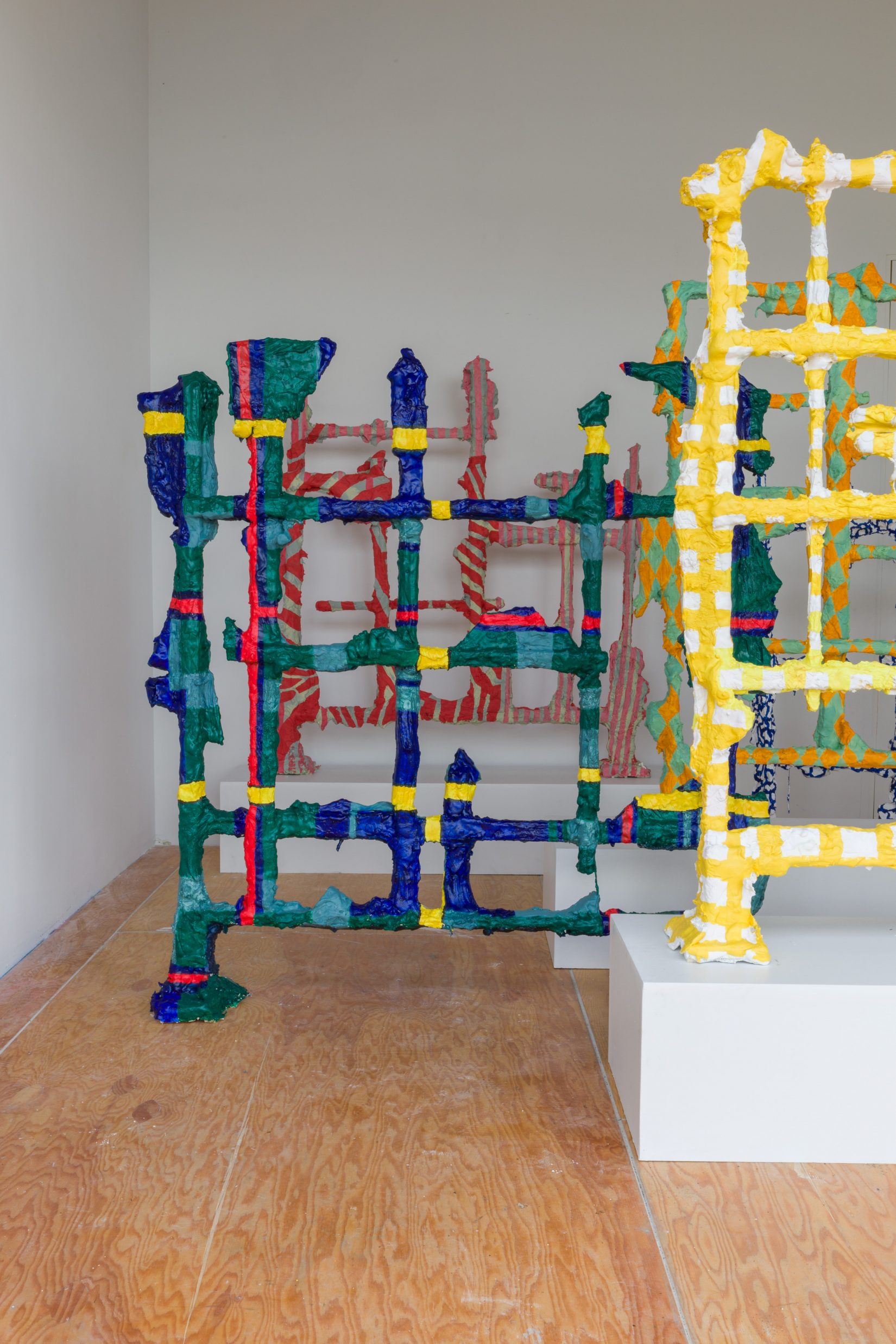 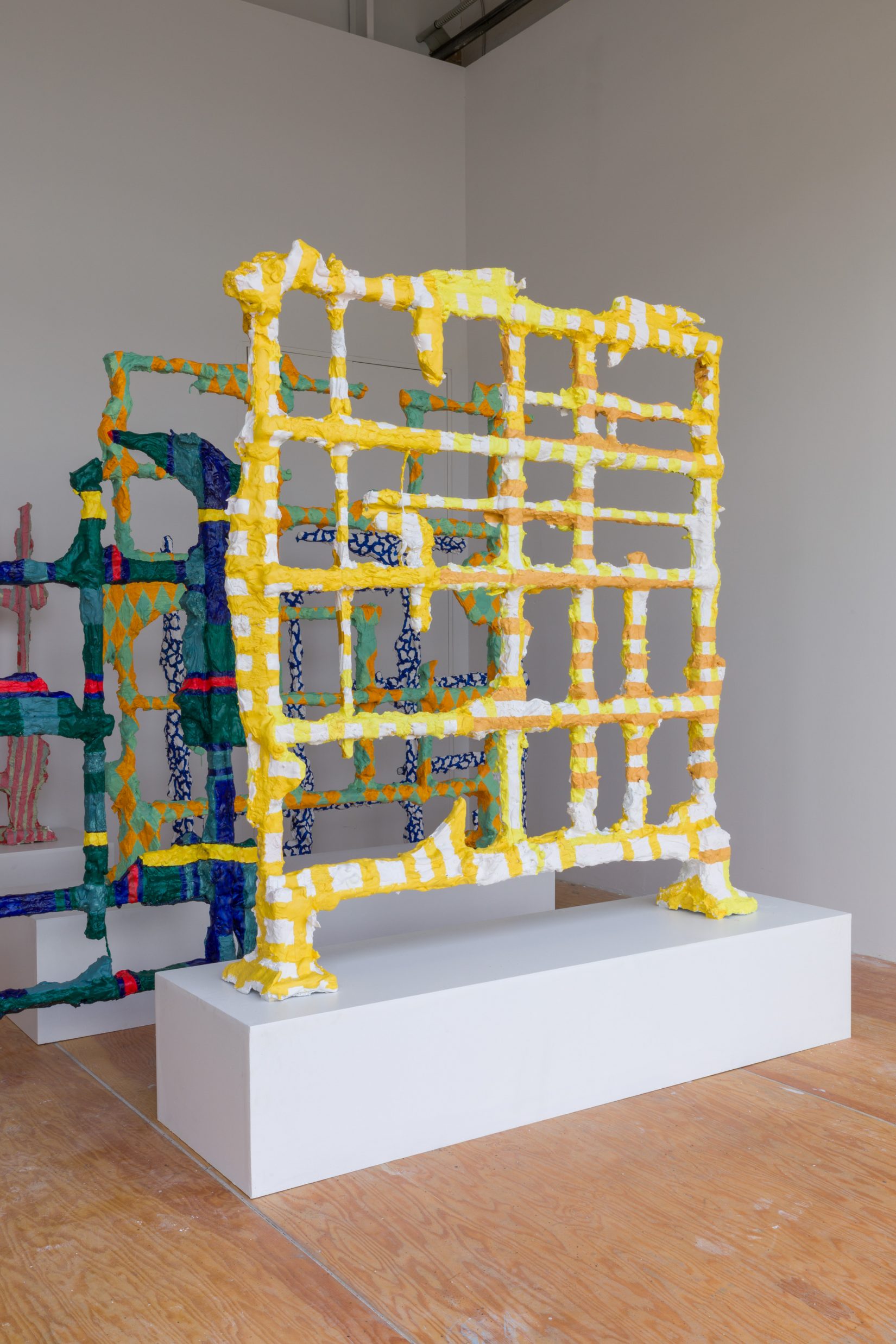 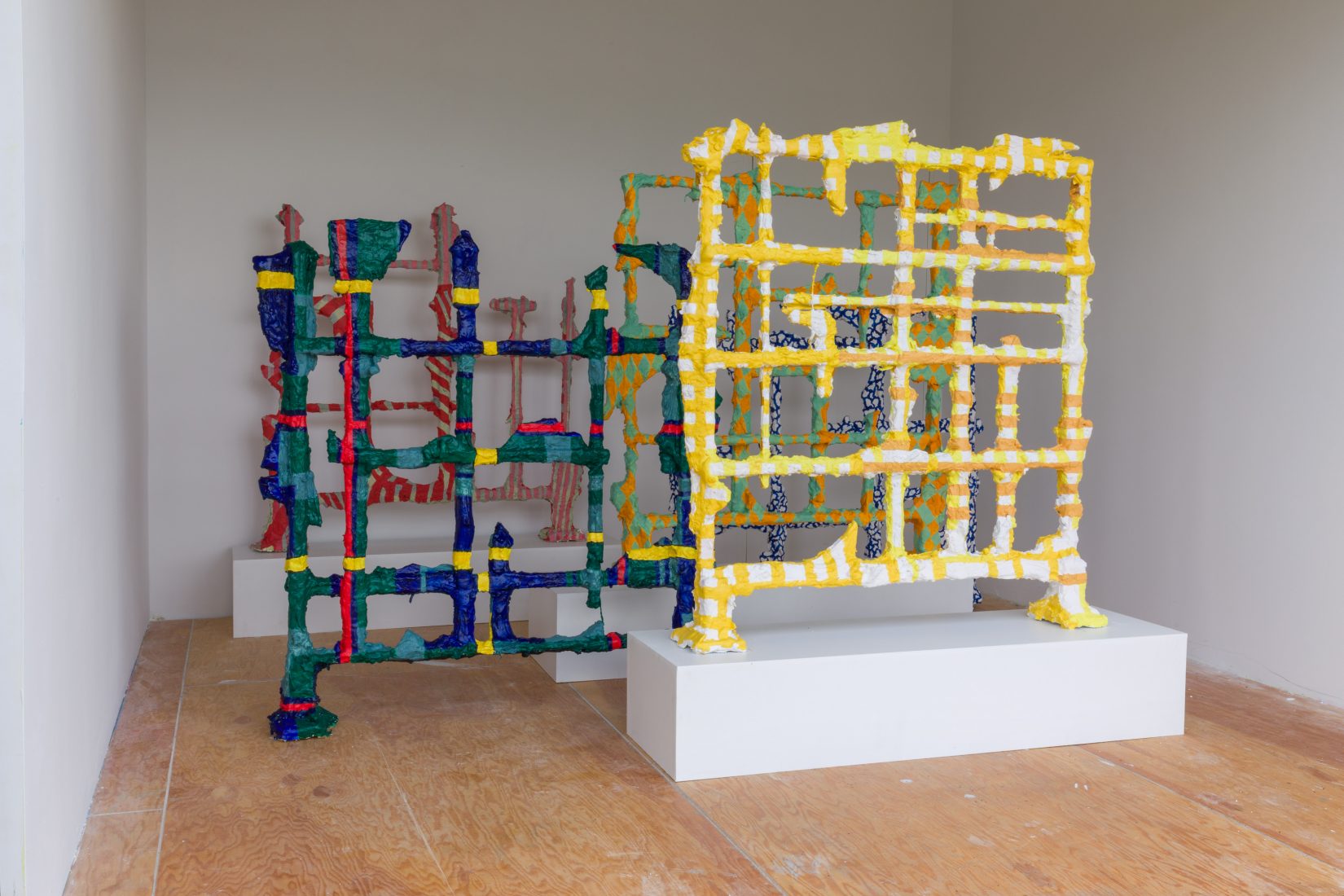 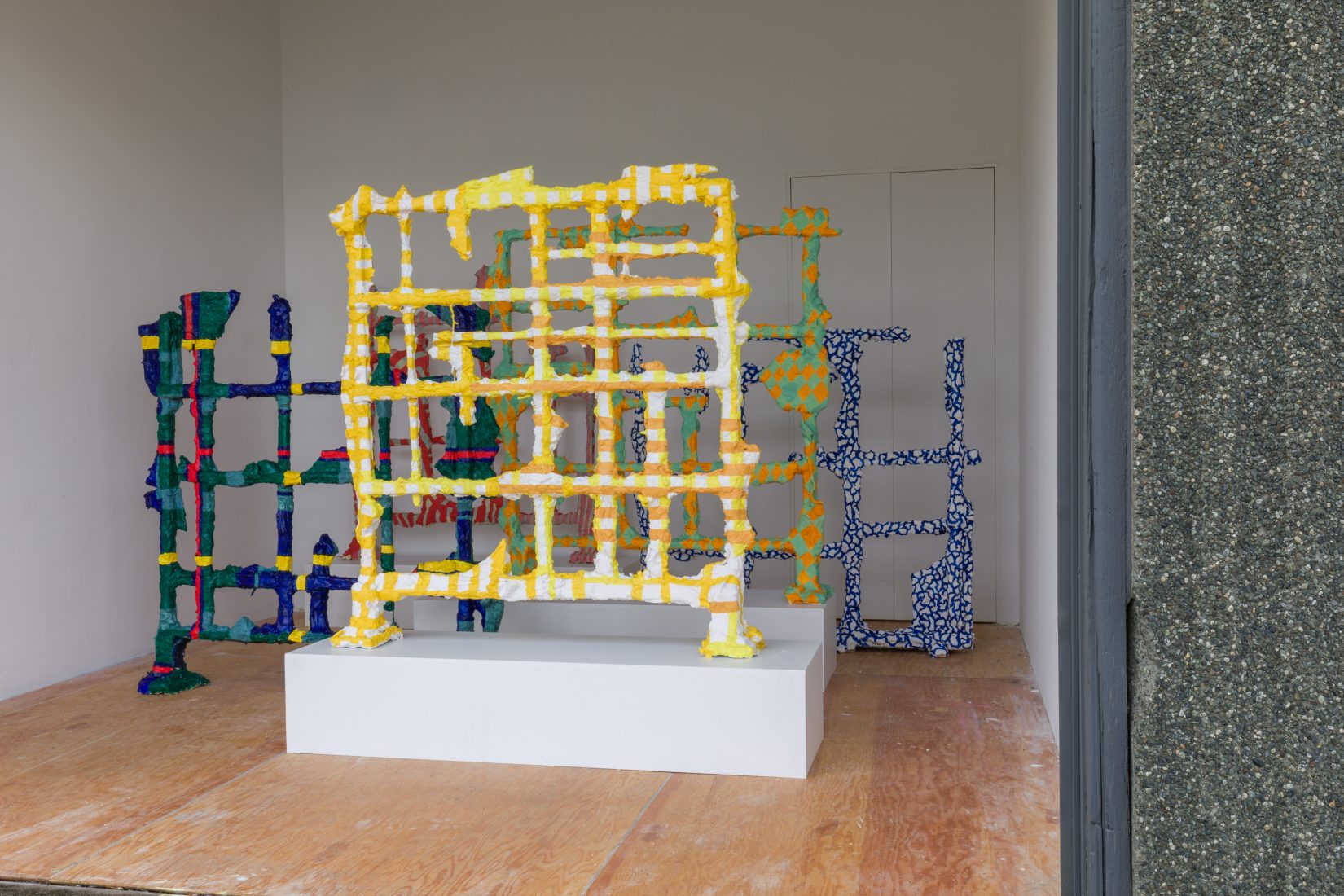 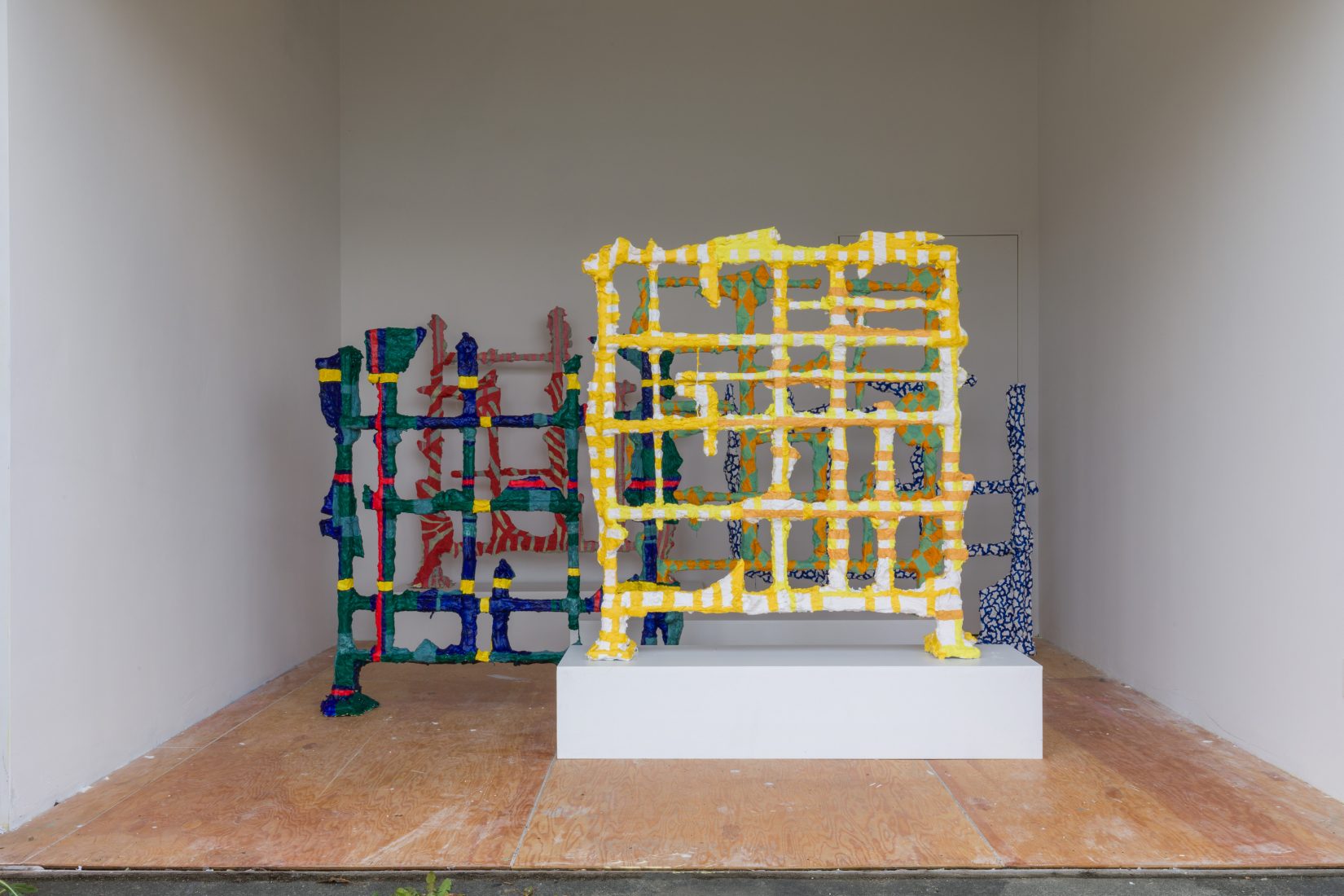 In Crosshatch, Caitlin Almond explores the relationship between form, object, and ornamentation. A selection of handmade screens are displayed on plinths within the Garage, constructed from plaster-coated wood painted in dense patterns. Their gridlike form is based on the handcrafted, decorative screens used in domestic spaces as room dividers, a type of domestic object which dates back to eighth century China and was later adopted in Japan. Particularly popular was the Japanese Fusuma, or sliding door screen, and the Byobu, or folding screen, which were eventually adapted and cannibalized by western Modernist artists like Henri Matisse, Felix Vallotton, Pierre Bonnard, and Maurice Denis.

Significantly, Almond’s use of plaster allows the sculptures to have a highly textured surface, mimicking thickly applied oil paint. This excessive application of plaster allows Almond to negotiate form and formlessness, recalling Alberto Giacometti, Rebecca Warren and Franz West’s vigorous use of this medium. Almond then further obscures the object’s form through the painting process, covering the screens in well-known textile patterns like paisley or tartan. She compares this use of all-over pattern with the Dazzle ships used during World War One. This counterintuitive form of camouflage covered ships in complex geometric patterns, making it difficult for the enemy to estimate the ship’s distance, speed, and directionality.

For Almond, this way of working refers not just to the dichotomy of form and formlessness, but to the distinctions between painting and sculpture, fine art and ornamentation. The plaster is applied in such a way as to conceal or bury the wooden structure beneath it, but in concealing, it necessarily reveals a new form.  While both the wooden foundation and thick plaster are sculptural materials, in her use of them she arrives at an approximation of painting. Indeed, the technique could be seen as an interpretation of underpainting, in which marks made are buried beneath paint to reveal something new. Then, the application of actual paint obscures further while referencing the separate discipline of textile.

In her varying use of elements pulled from painting, sculpture, and domestic ornamentation, Almond presents the viewer with an object – itself a tool of domestic separation and concealment – that exists at the intersection of these separate, yet connected, traditions.