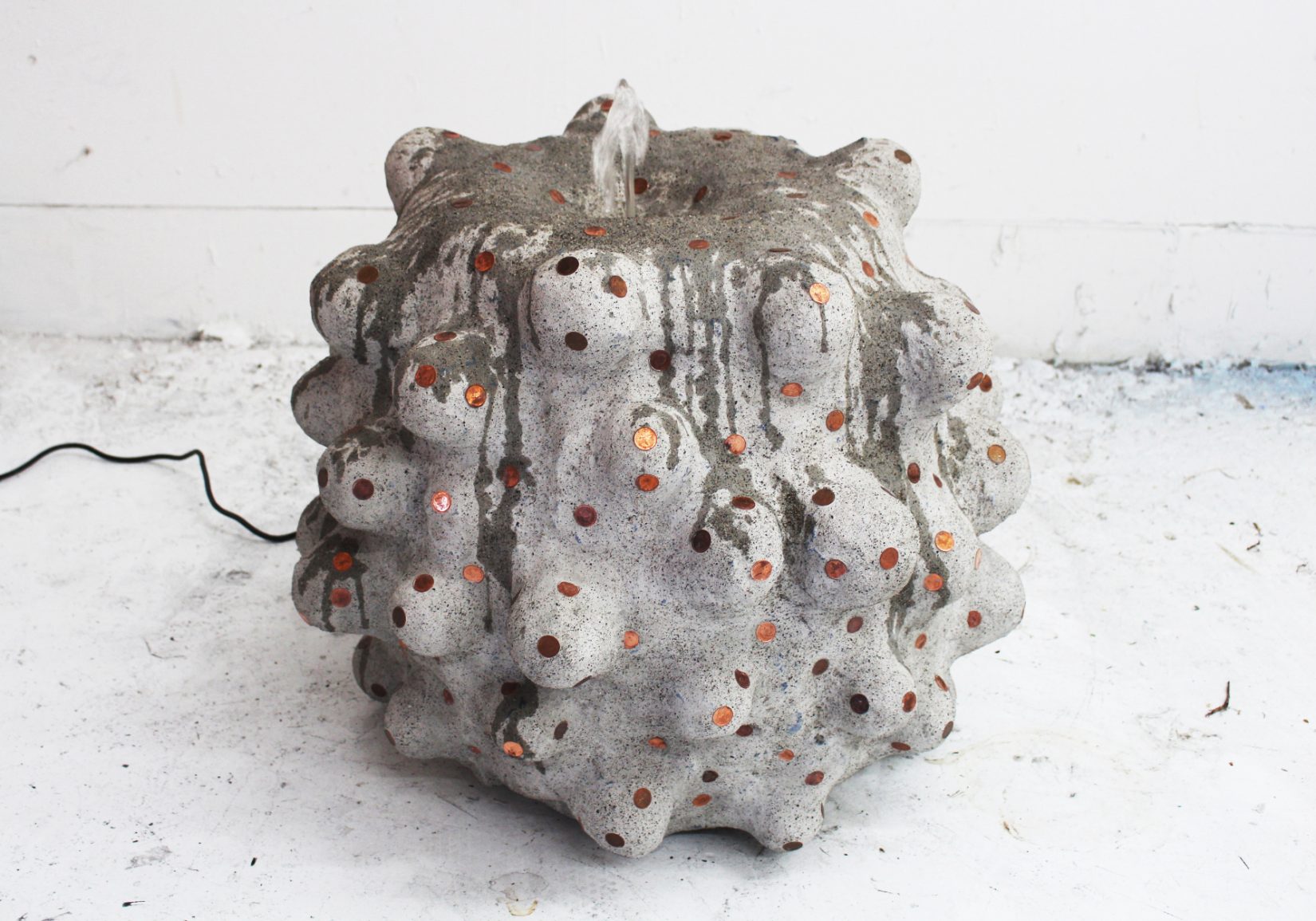 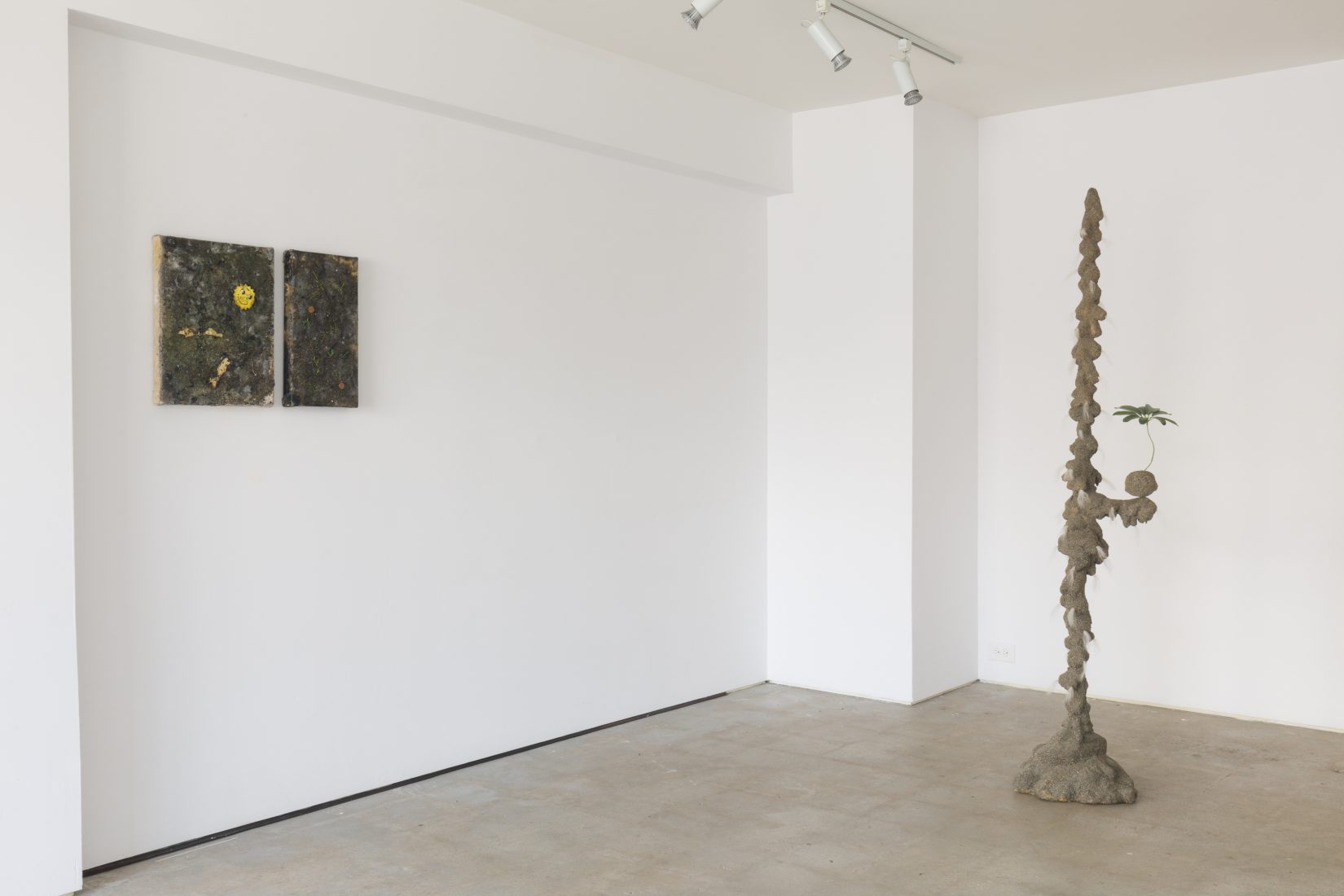 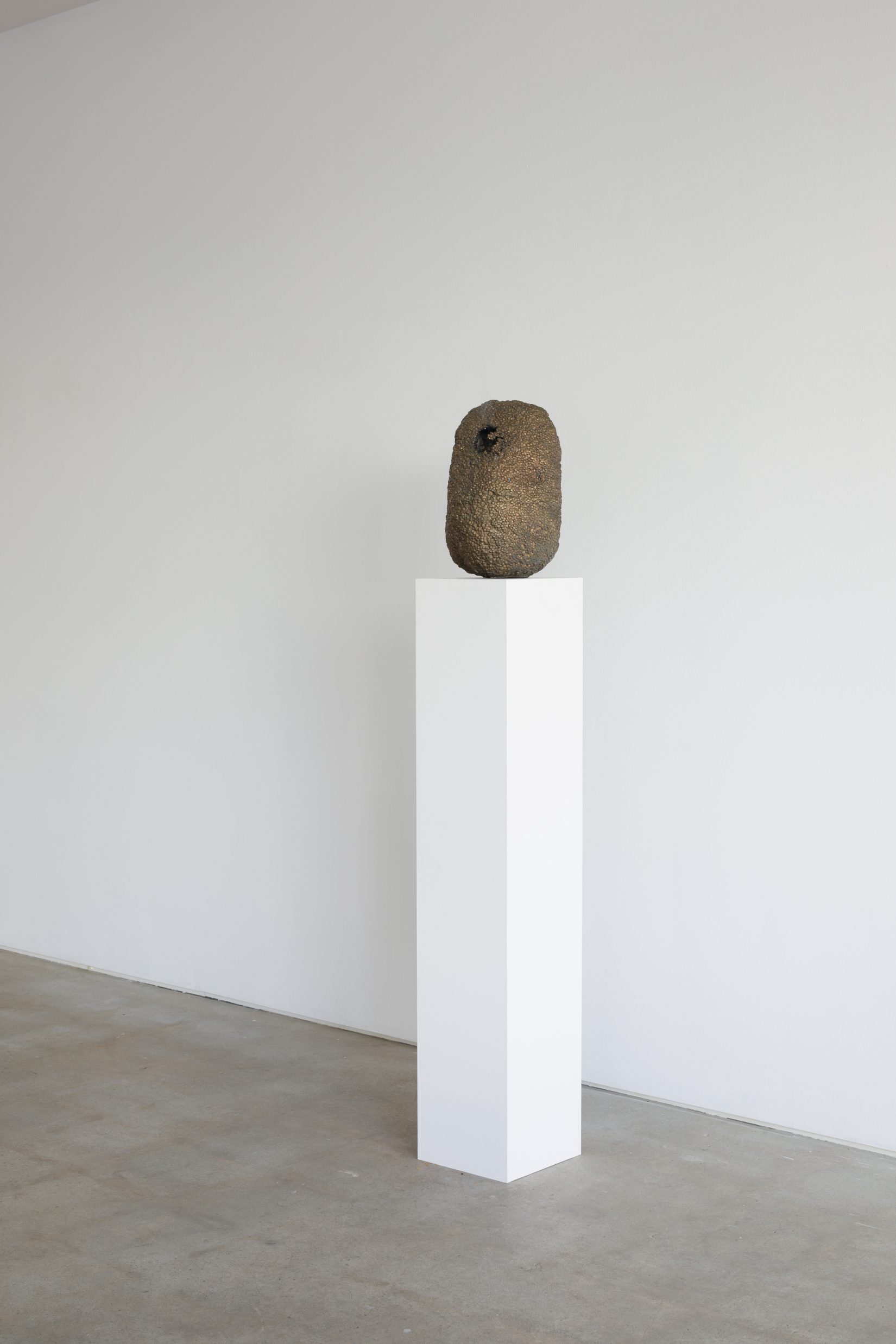 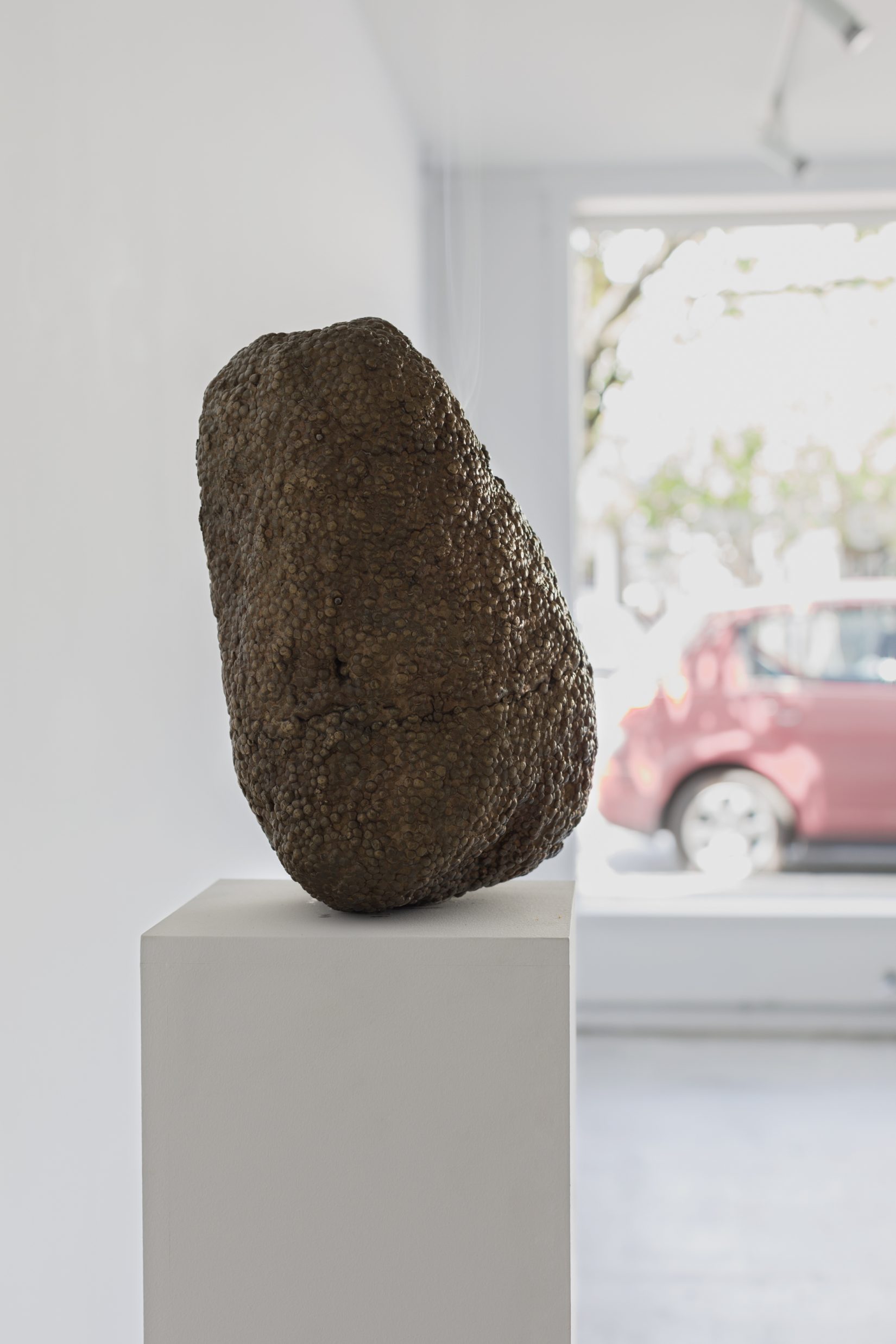 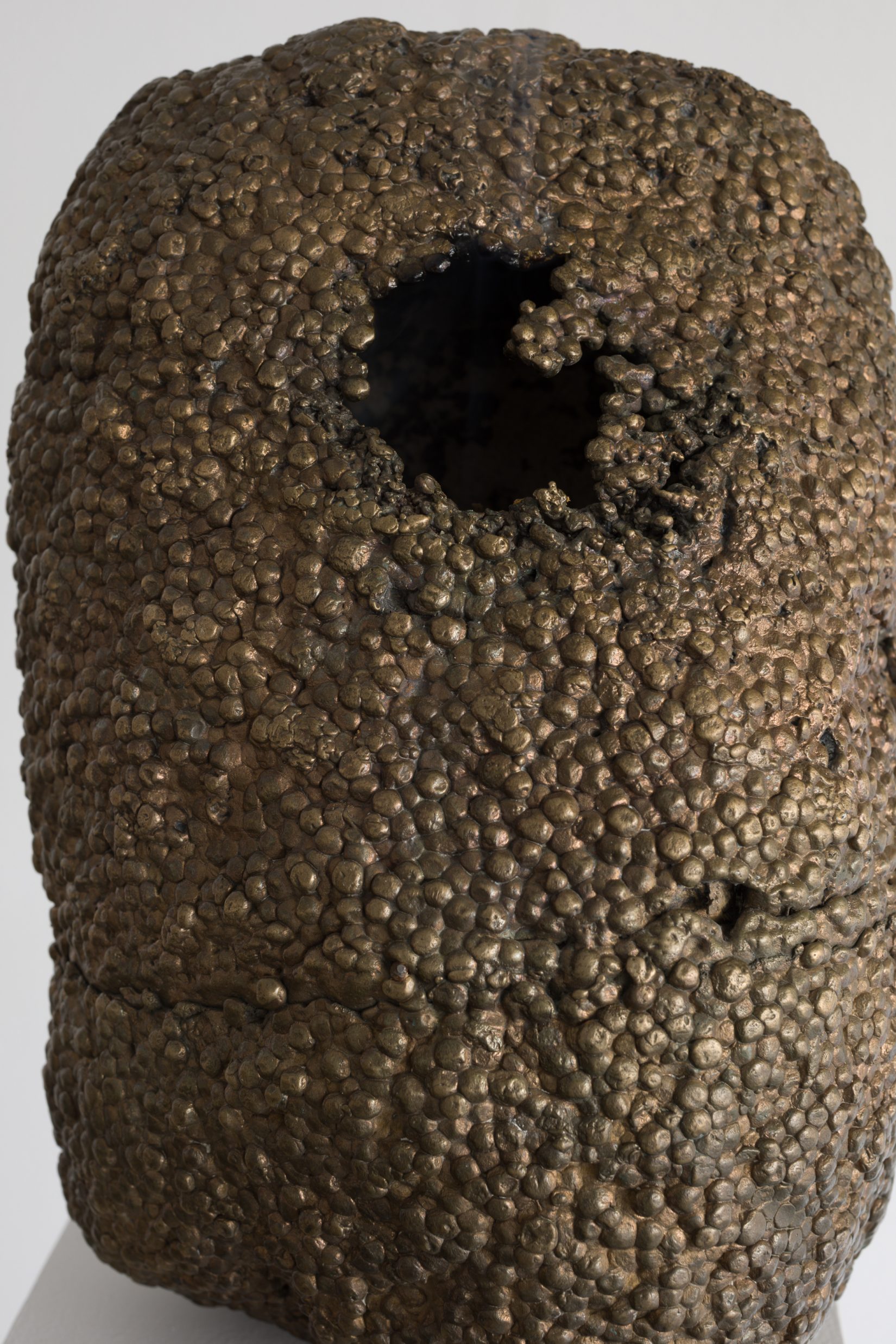 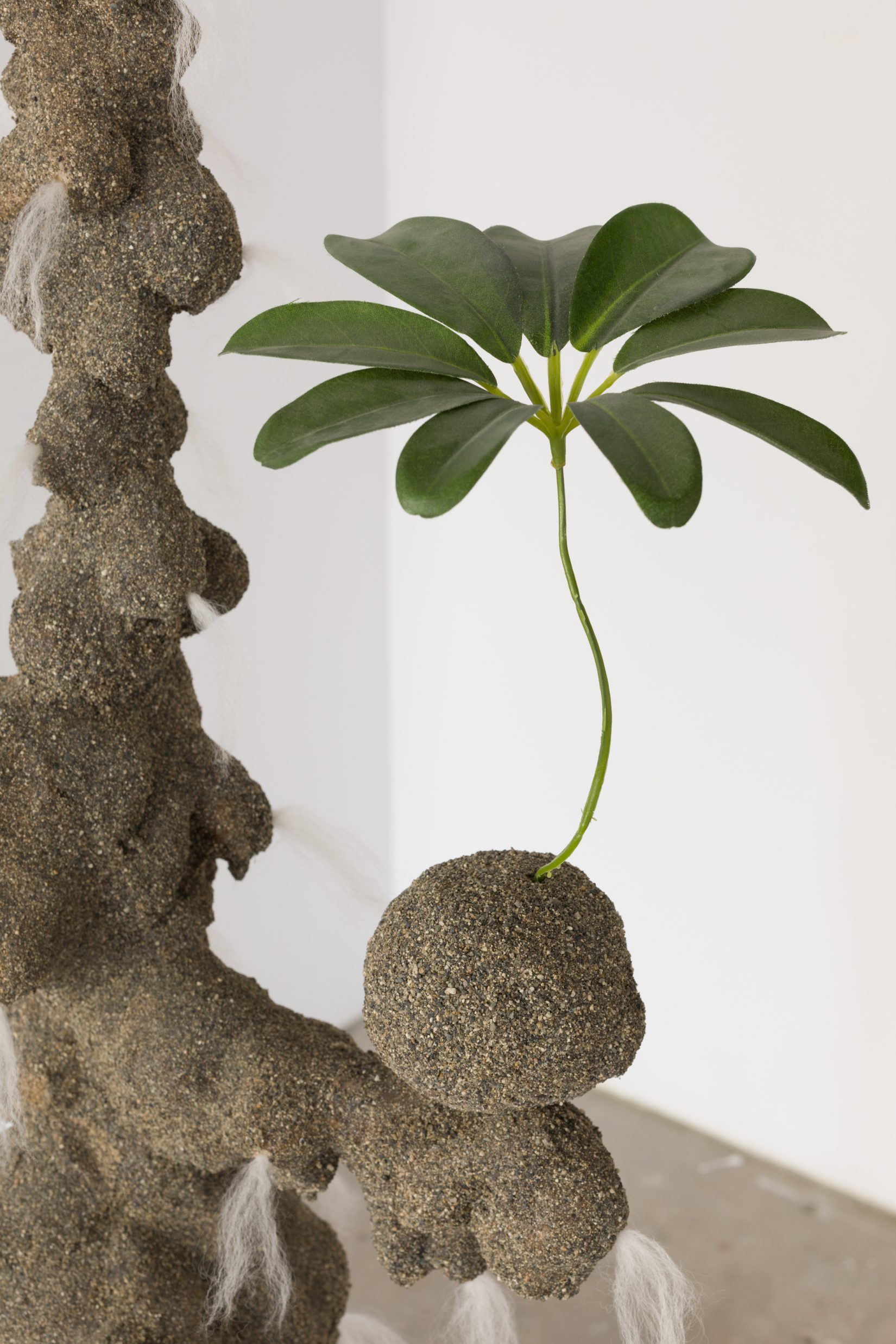 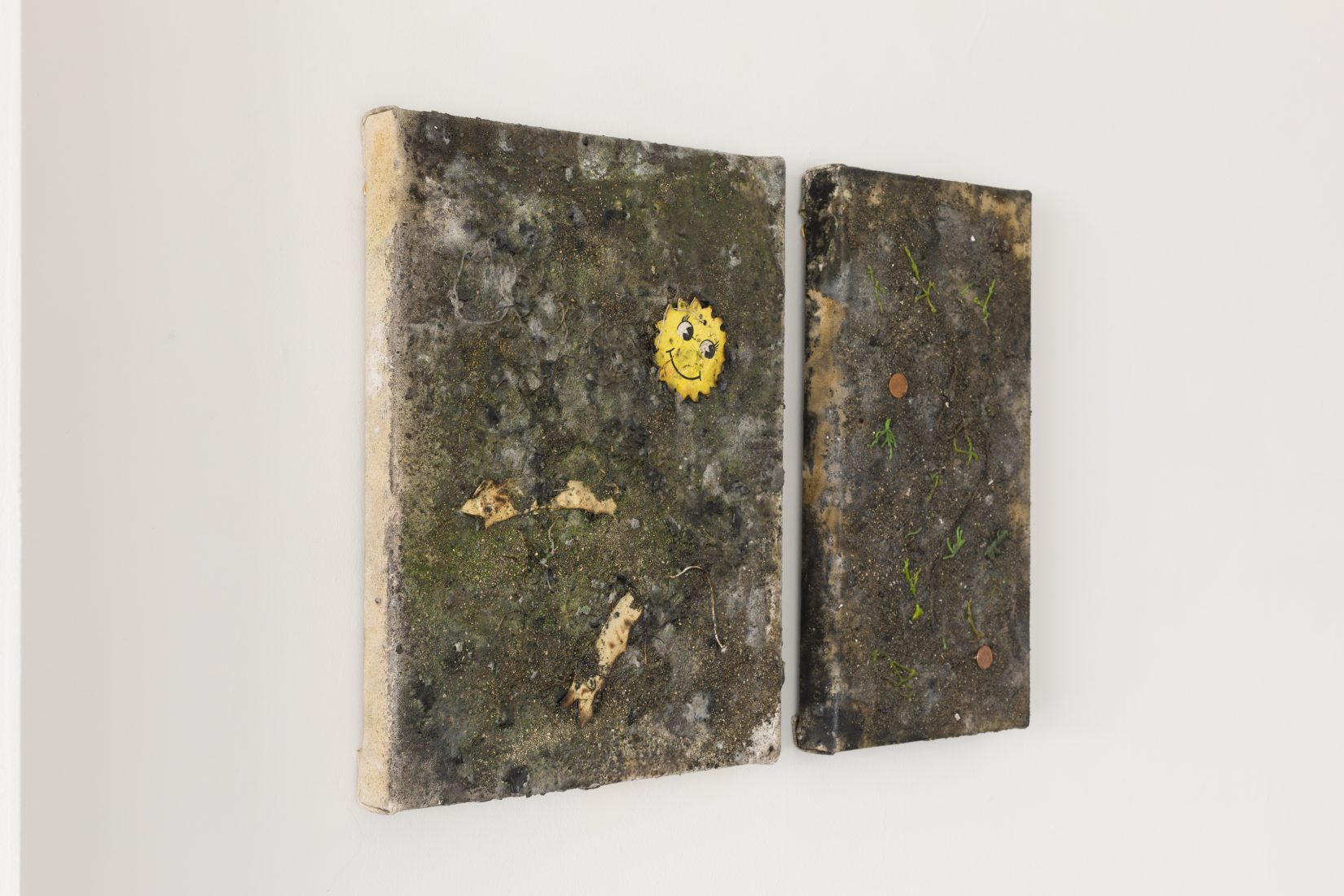 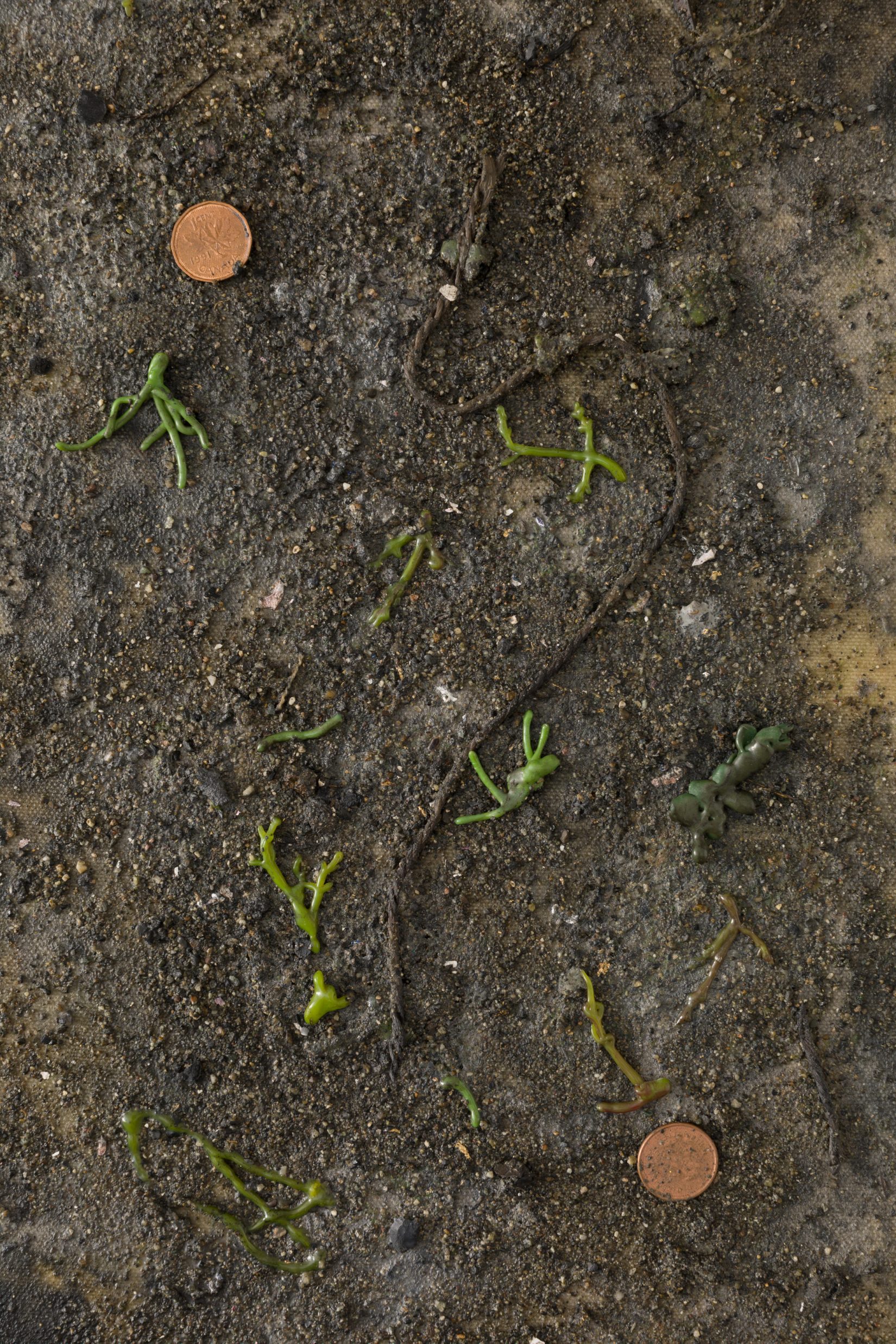 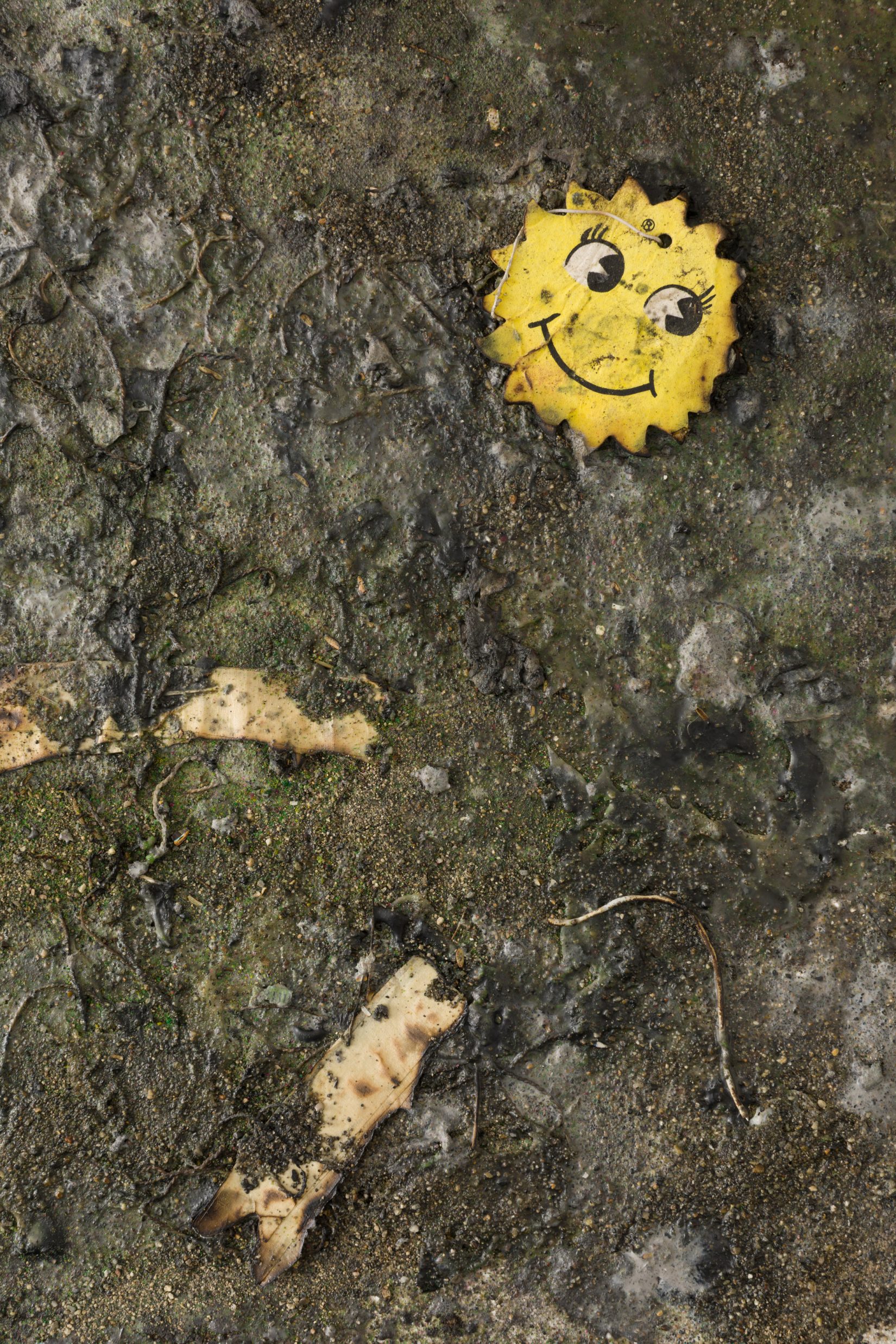 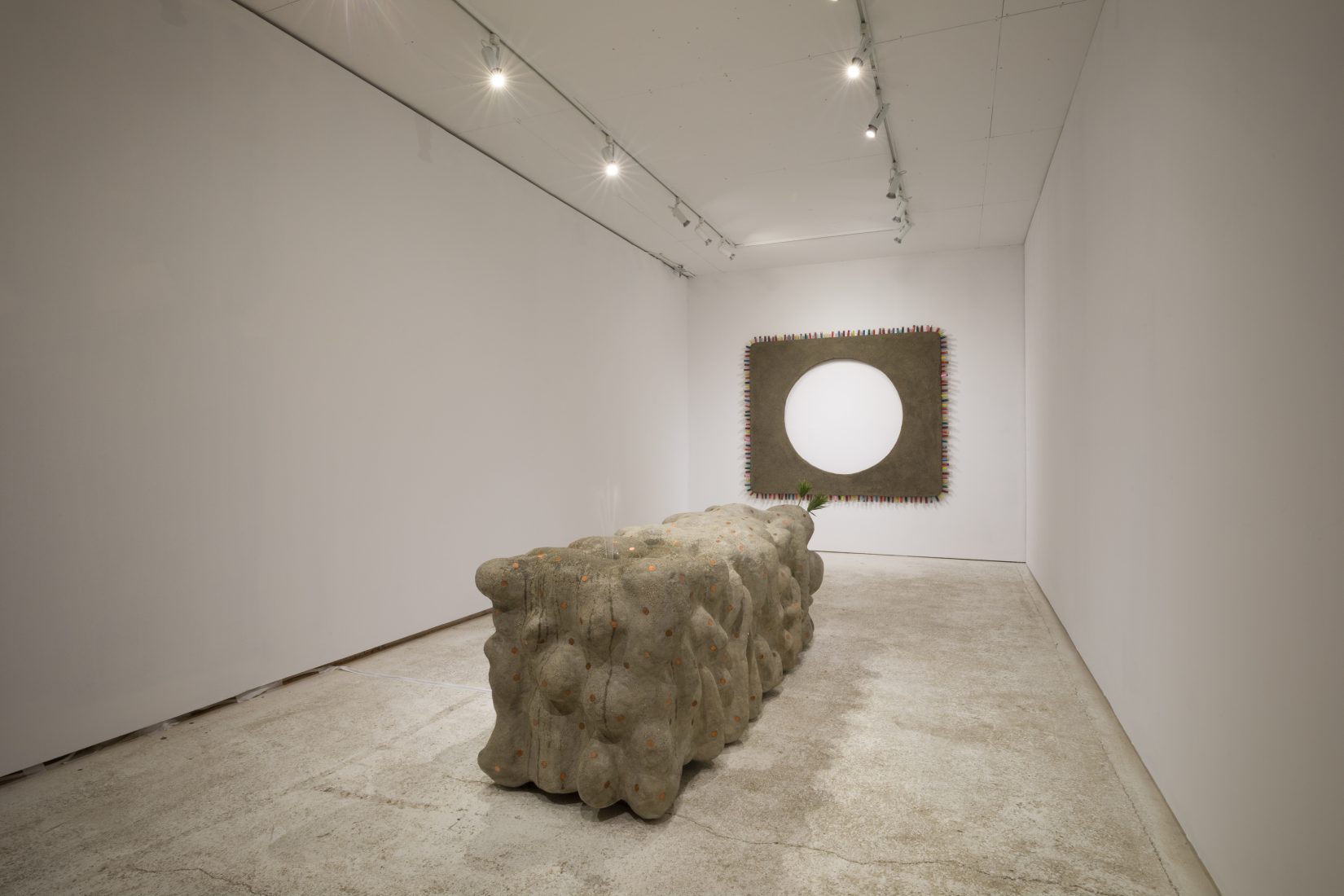 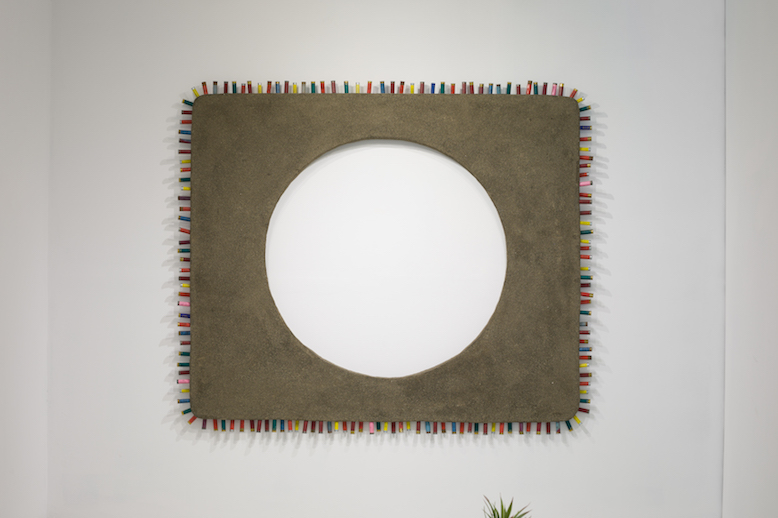 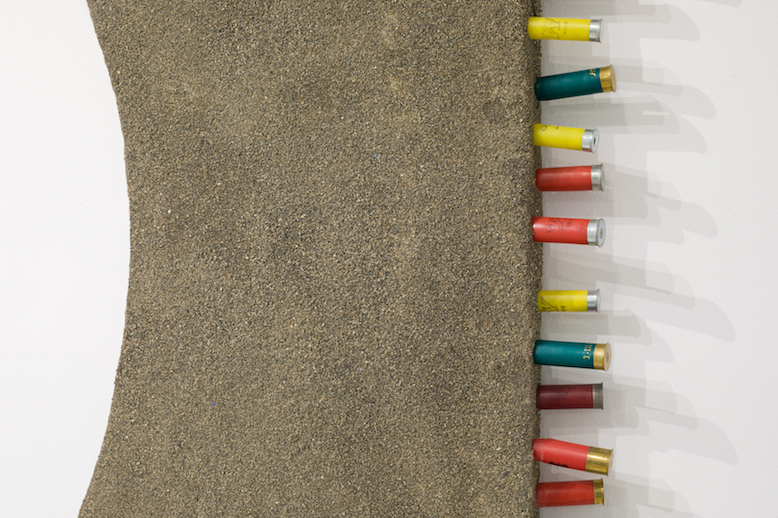 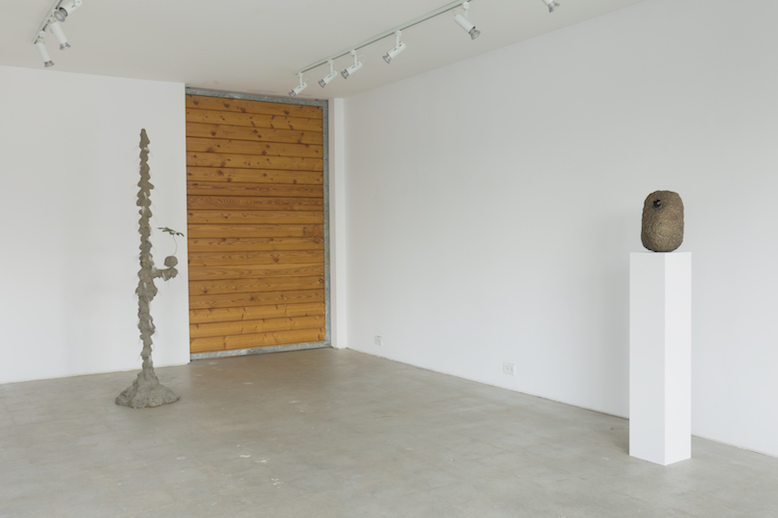 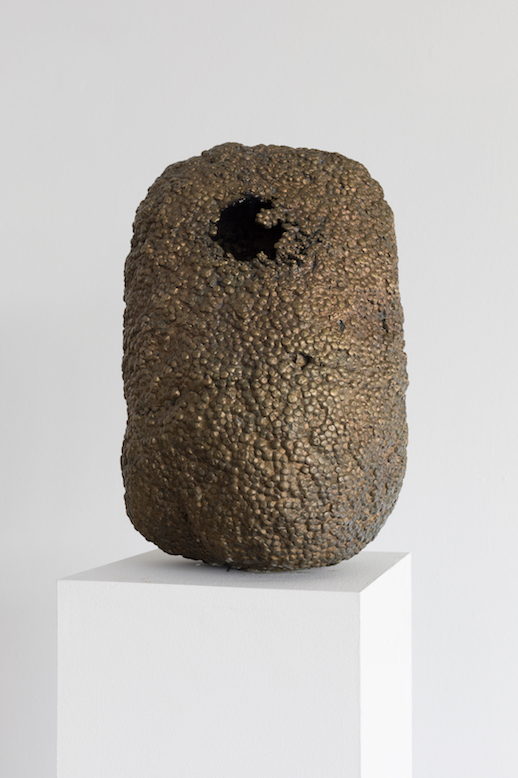 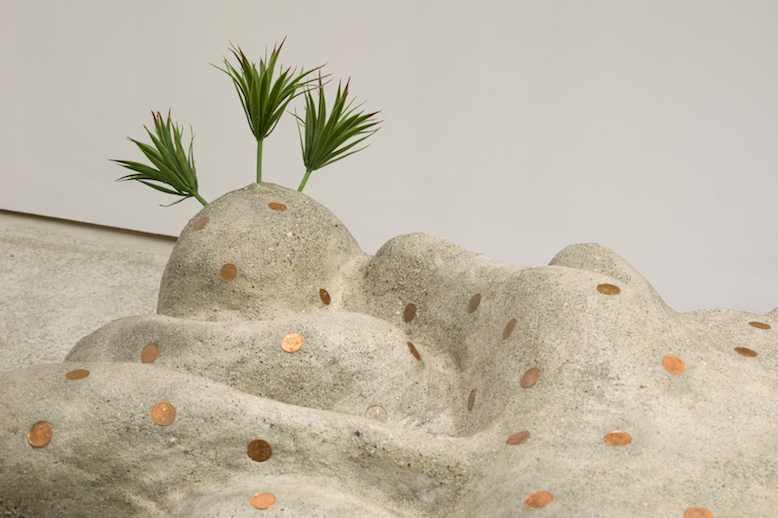 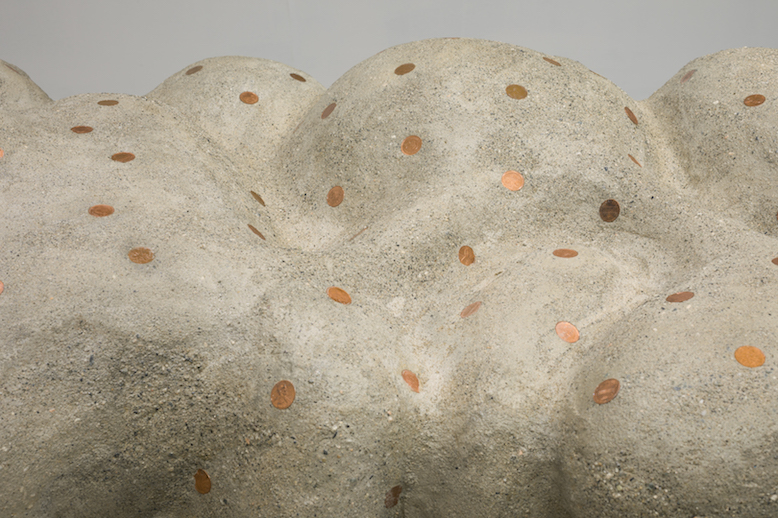 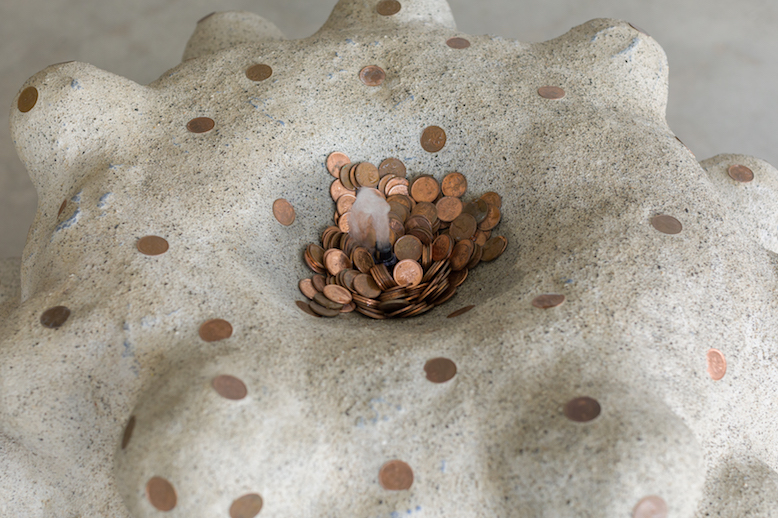 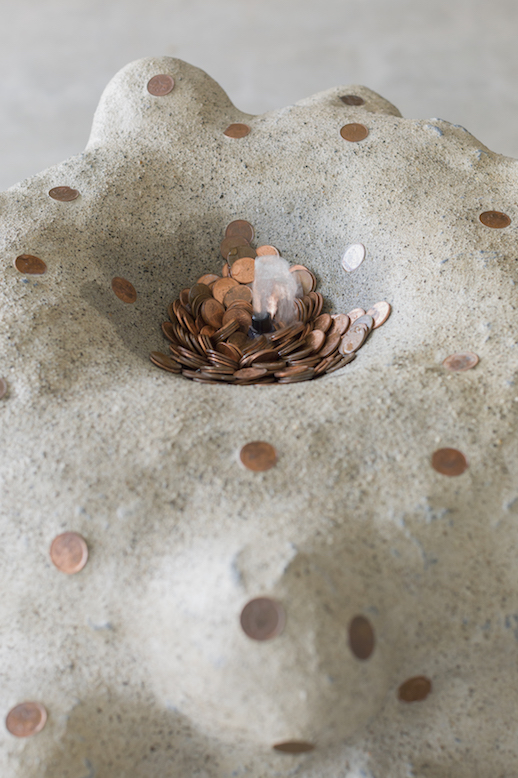 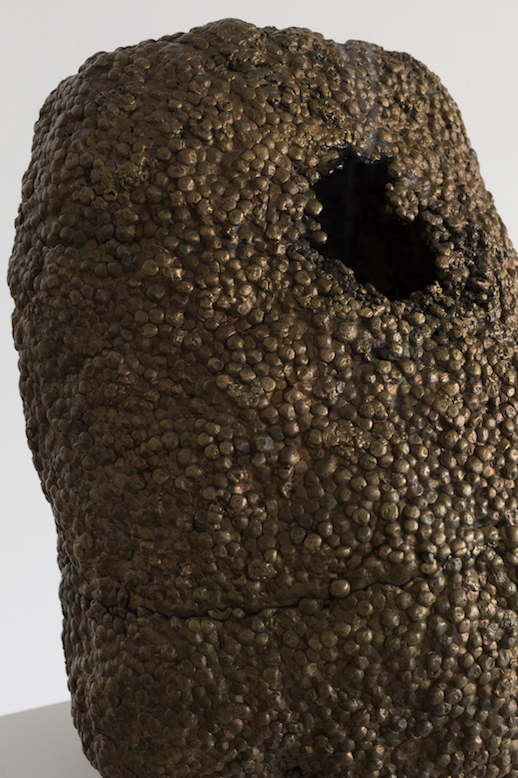 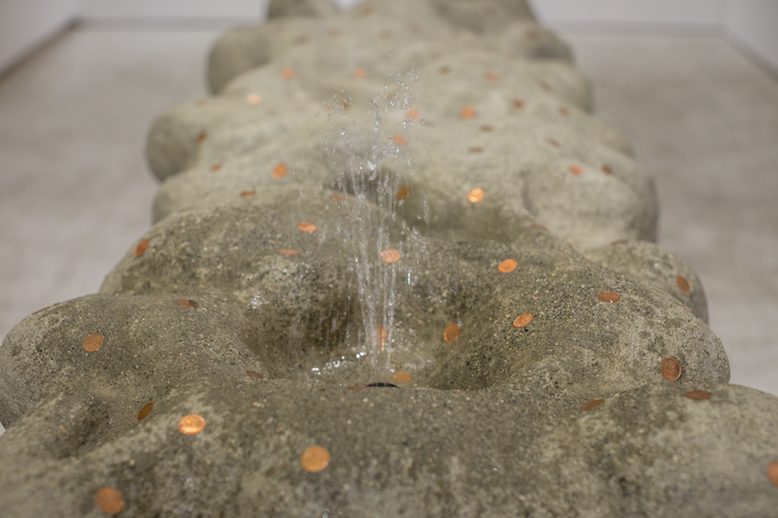 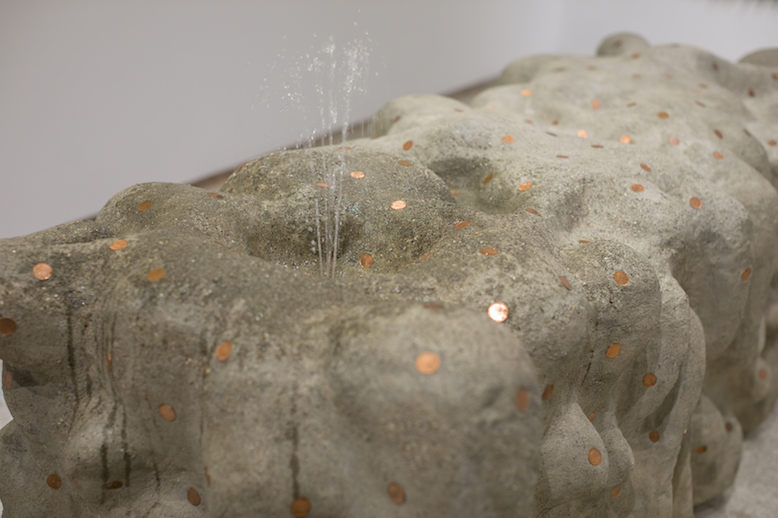 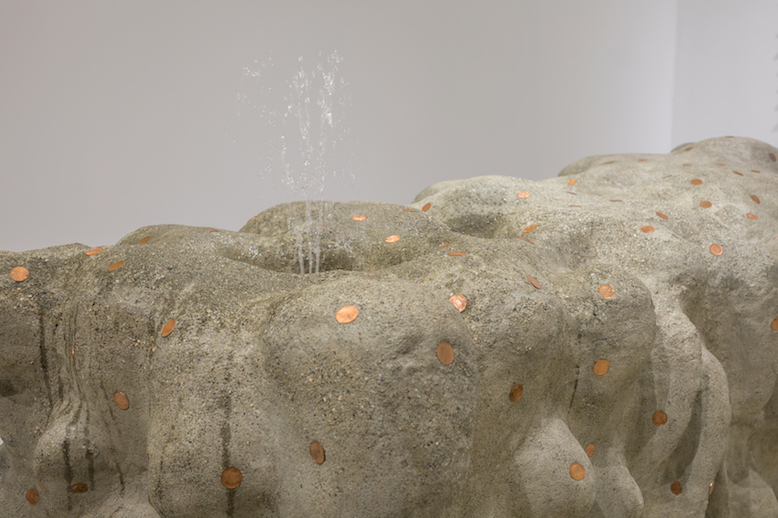 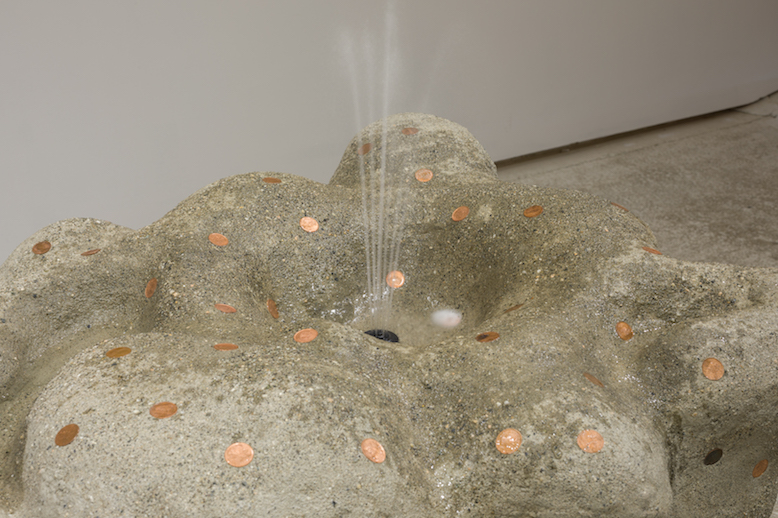 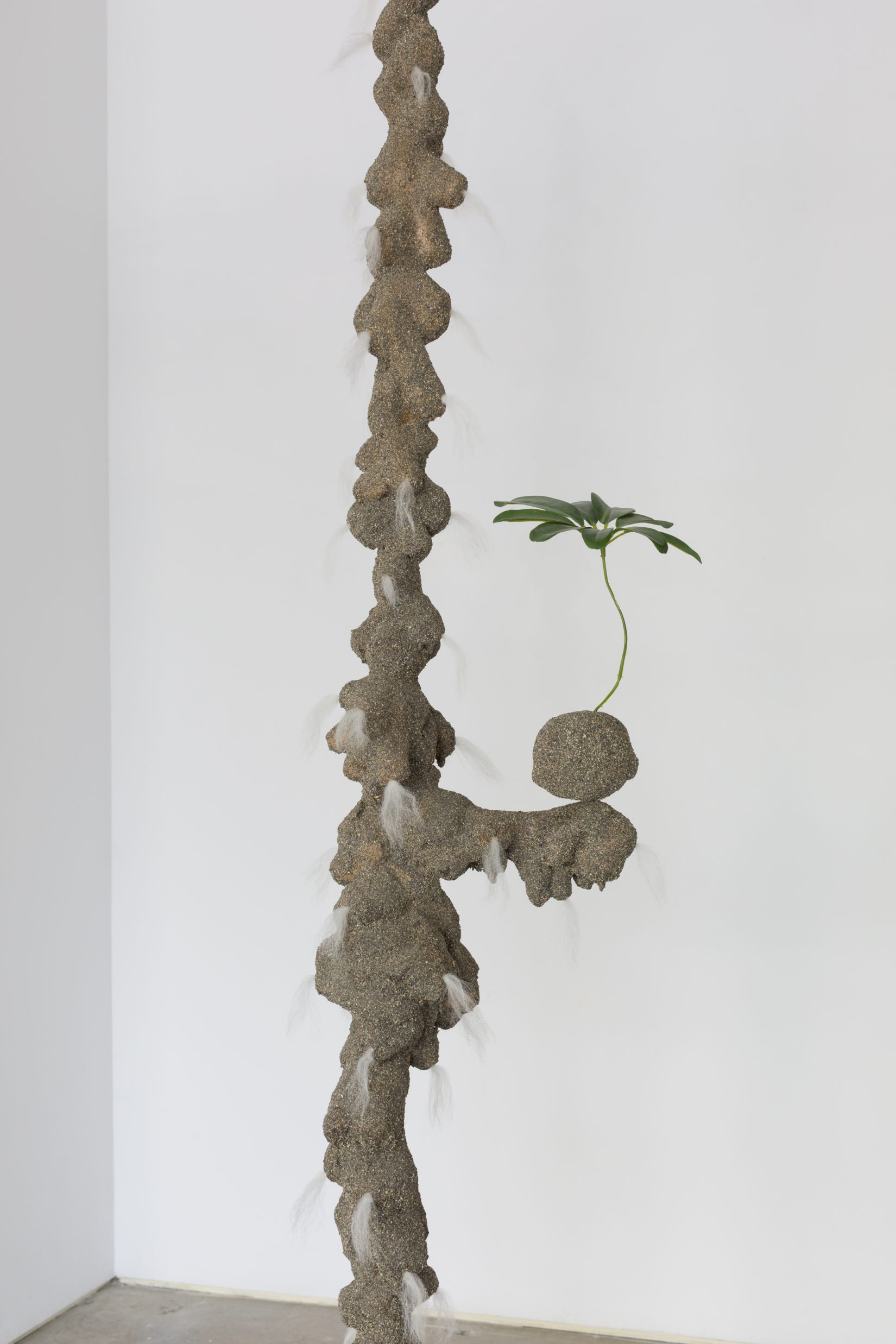 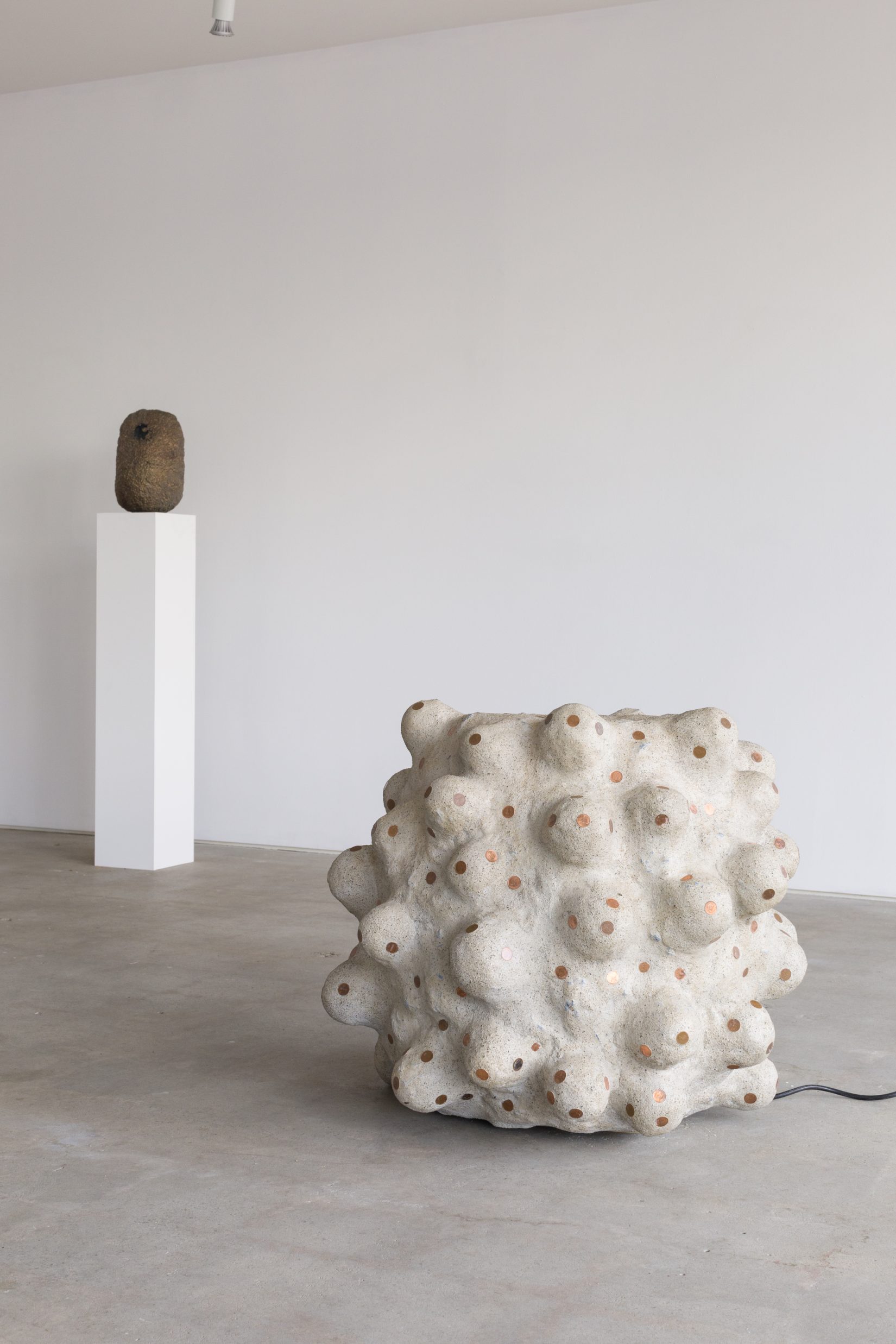 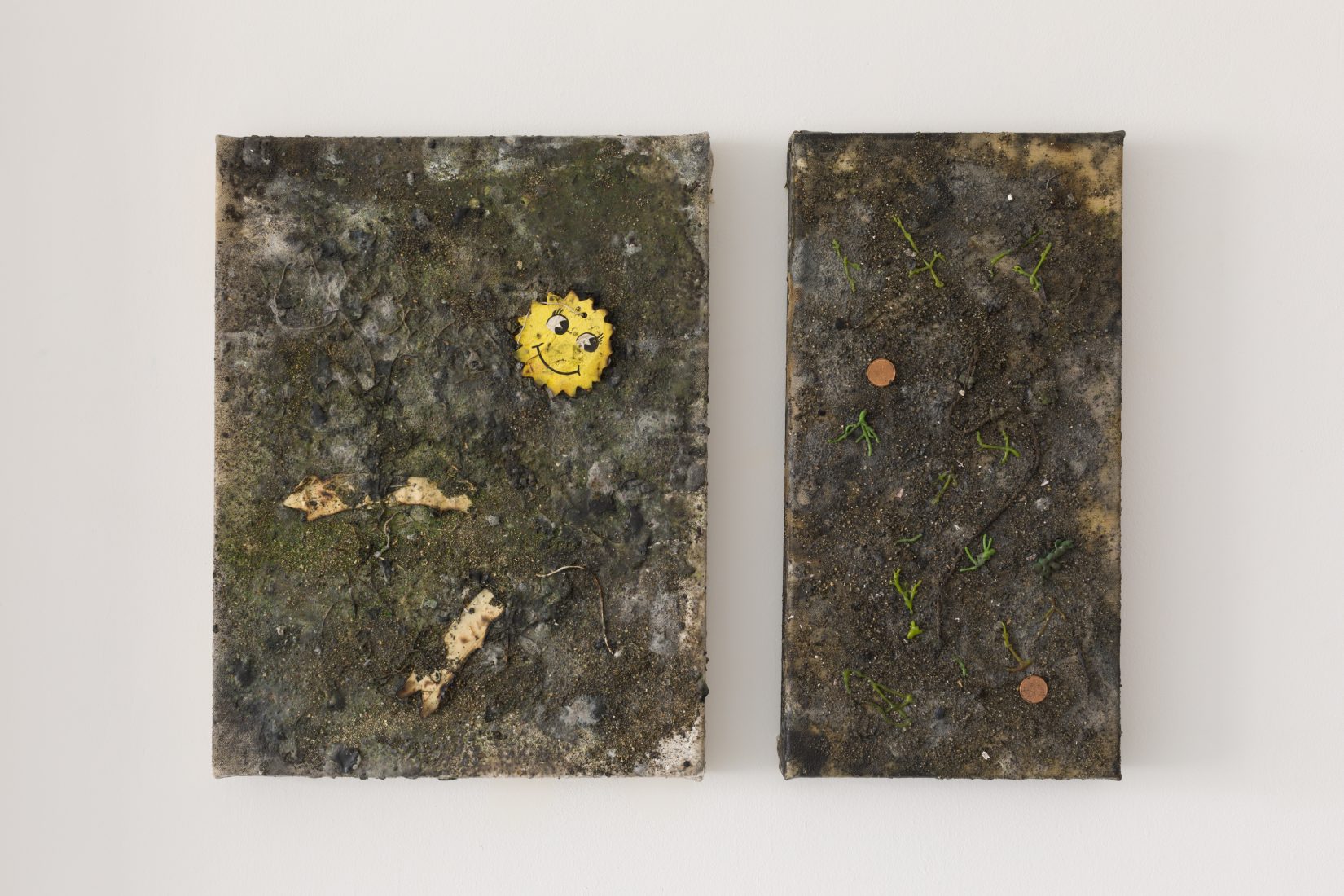 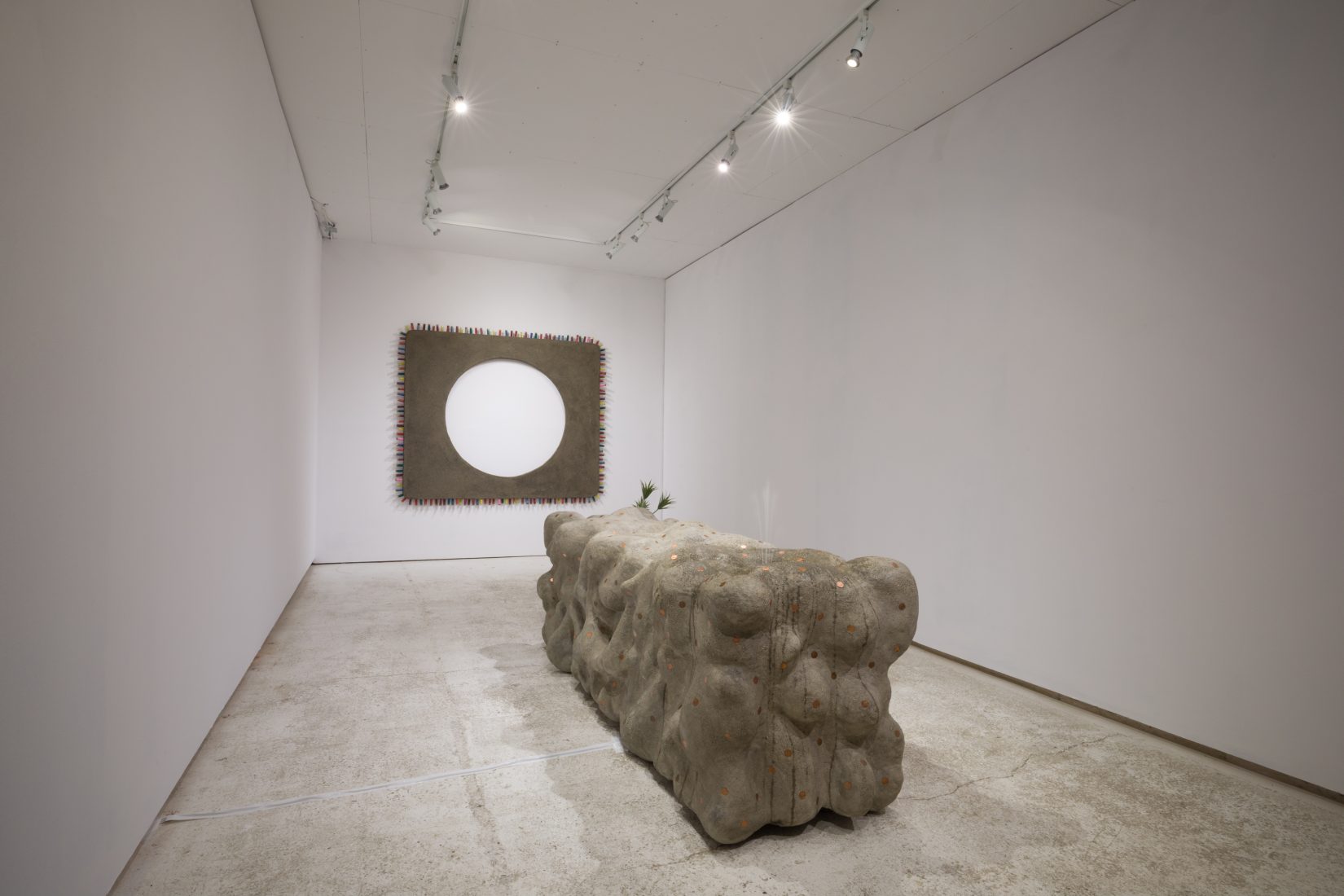 Adorned with the steadily accumulating debris of contemporary life—plastics, Styrofoam, bottle caps, and pennies—the sculptures in Alex Tedlie-Stursberg’s Everything Flows exude, despite their manufactured origins, an aura of the organic. Often they evoke ancient things: fossilised forests, archaeological artefacts, coral reefs, alien planets. Poised between the artificial and the artisanal, the ready-made and the hand-made, they display a trippy, absurd quality that belie Tedlie-Stursberg’s thoughtful engagement with humanity’s discarded materials and the value systems that help create them.

In addition to scavenged detritus, concrete—what he calls “the urban equivalent of stone”—is often Tedlie-Stursberg’s construction material of choice. Though concrete resolutely evokes modern-day architecture, he uses it not in the imposing, blocky style of Brutalism, but rather to render highly touchable, curvilinear forms. With their stripped-down materiality, his sculptures reflect the principles of minimalism, though formally they have more in common with the kitschy, clearly fake worlds of sci-fi films like Planet of the Apes (1968) than the cold industrial slabs of concrete à la Donald Judd.

In The Social Life of Things (1986), anthropologist Arjun Appadurai argues that commodities—like people— have a shifting social and cultural “potential” as they are taken in and out of circulation, and move from one context to another. In his imaginative appropriation of the flotsam and jetsam of contemporary existence, Tedlie-Stursberg follows this logic, finding fresh potential in things typically written off as worthless. He polka-dots the concrete surface of two water-fountain sculptures with copper-coloured pennies, some bright and shiny, others dark and dirty. The penny was famously removed from the Canadian monetary system in 2012 as its production cost exceeded its face value; with the inexorable shift to making payments by card and online, it’s surely only a matter of time before coins and paper money are entirely retired from circulation. His use of pennies also references their association with wishes; fountains are filled with them as “payment” for the realisation of dreams. In a tongue-in-cheek gesture, Tedlie-Stursberg transforms throwaway change into new material for the construction of sculptures that also function as fountains.

To decorate Clear Spot, a sand and fibreglass work, Tedlie-Stursberg appropriates another discarded object: used shotgun shells. These colourful plastic canisters litter shooting ranges and hunting grounds; Tedlie-Stursberg repurposes them as embellishment for his sculpture. For Woolly Marker, also composed of sand and fiberglass but this time in the form of a disheveled tree-like form covered with lumpy growths, Tedlie-Stursberg inserts tufts of found fur that suggest the traces of a wild animal in some prehistoric wood.

Through the strategic process of re-working and re-valuing detritus as a material for sculpture, Tedlie-Stursberg explores the potential of artistic creativity and creation in the age of the disposable. When he finds a piece of sea-sculpted Styrofoam on the beach and reuses it as the mold for a bronze sculpture, the resulting intricately textured “cosmic egg”, as Tedlie-Stursberg jokingly describes its form, playfully pushes viewers to reflect on the often conflicting forces of nature and humanity—one that will surely prevail long after our passing. Rather than falling into a knee-jerk pessimism, Tedlie-Stursberg instead finds solace—and inspiration—in the idea of the world in a state of constant transformation. As his title maintains: everything flows.