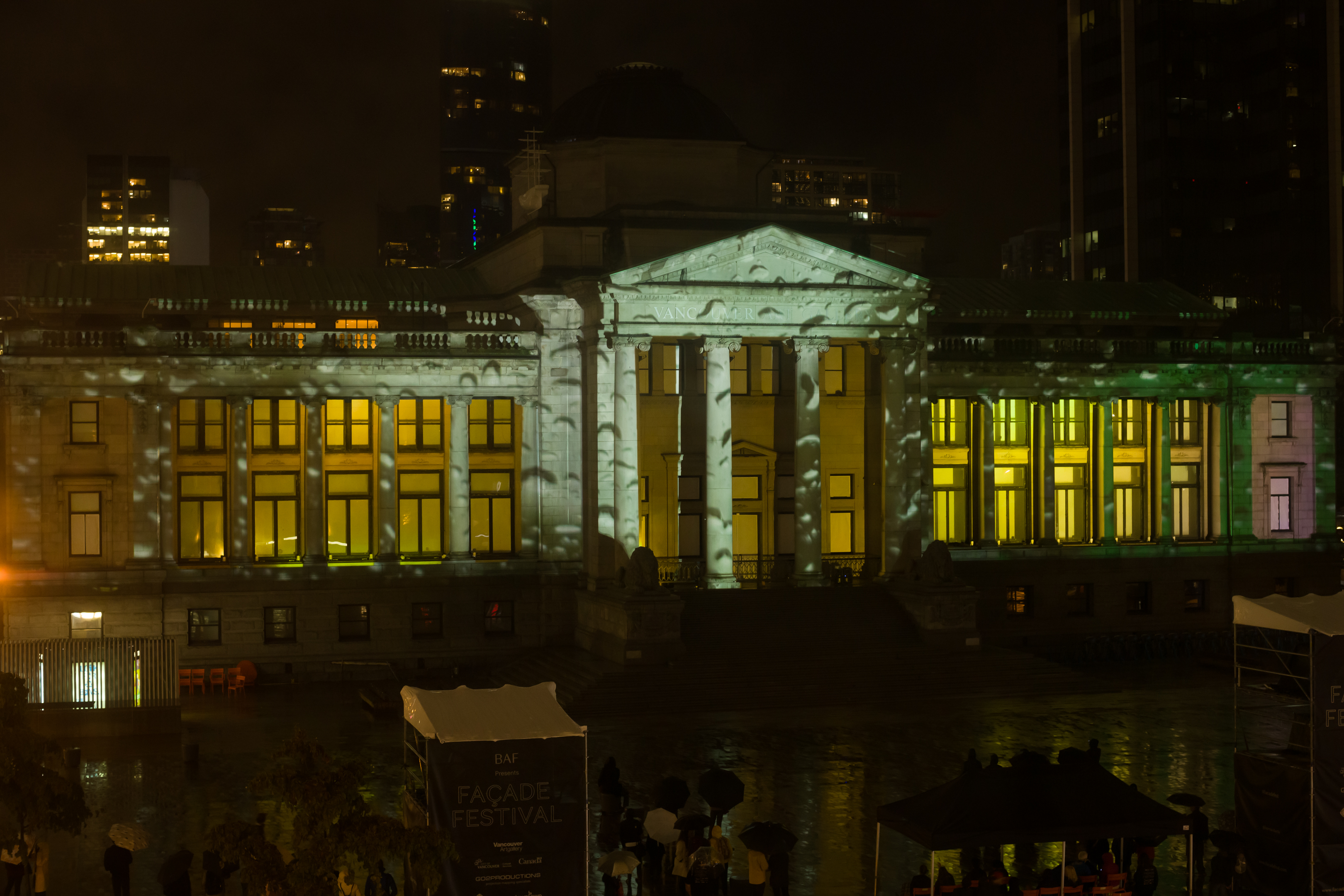 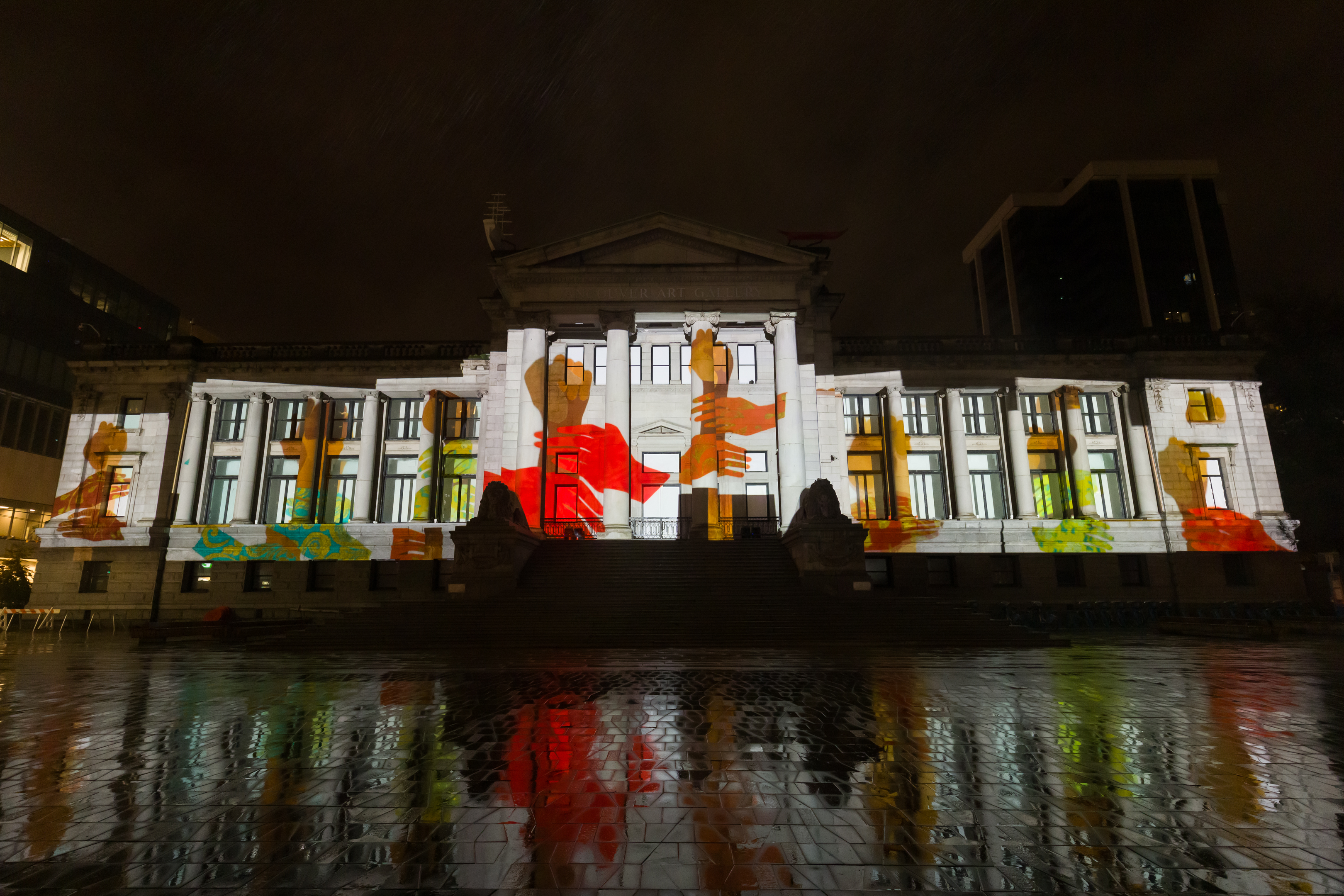 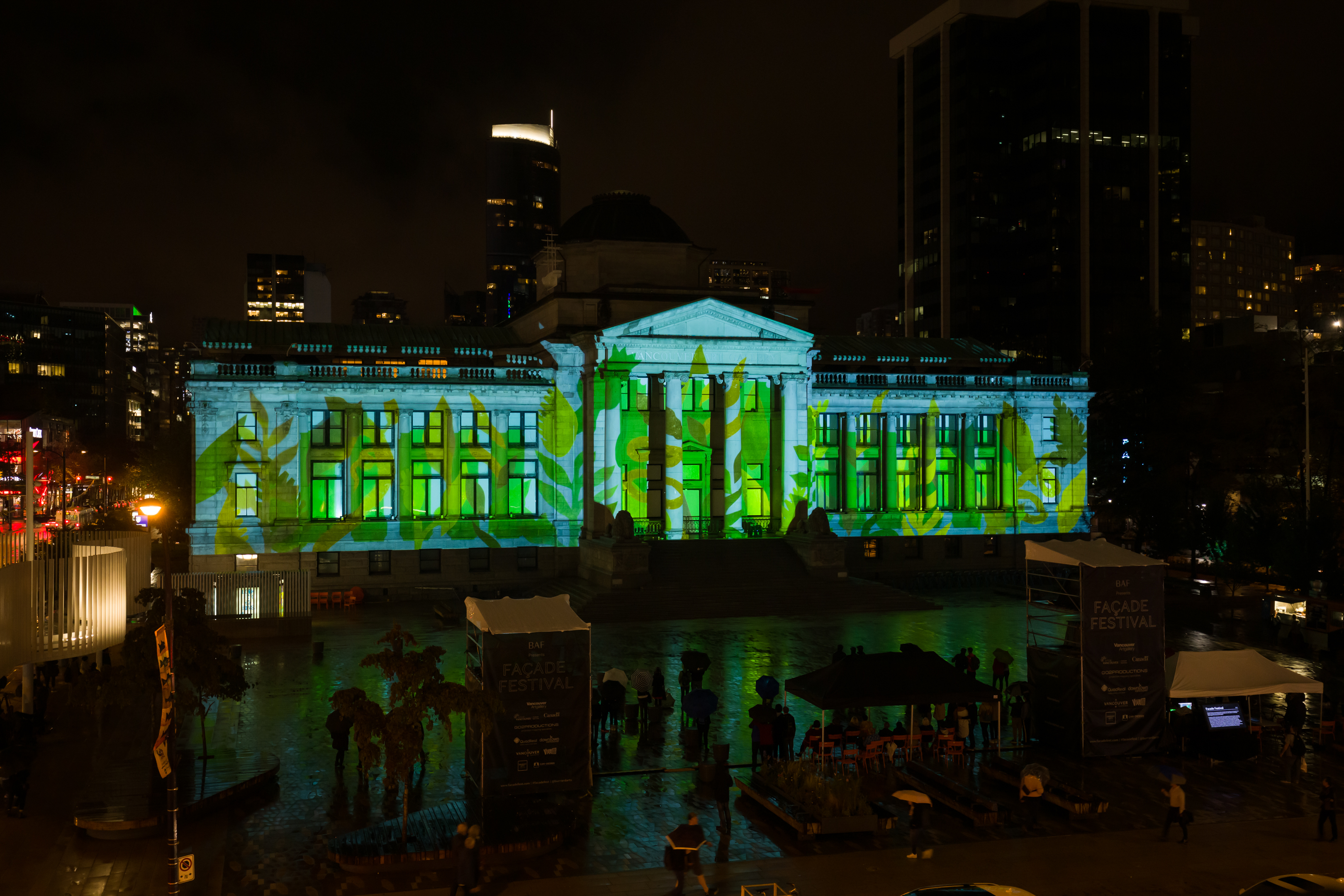 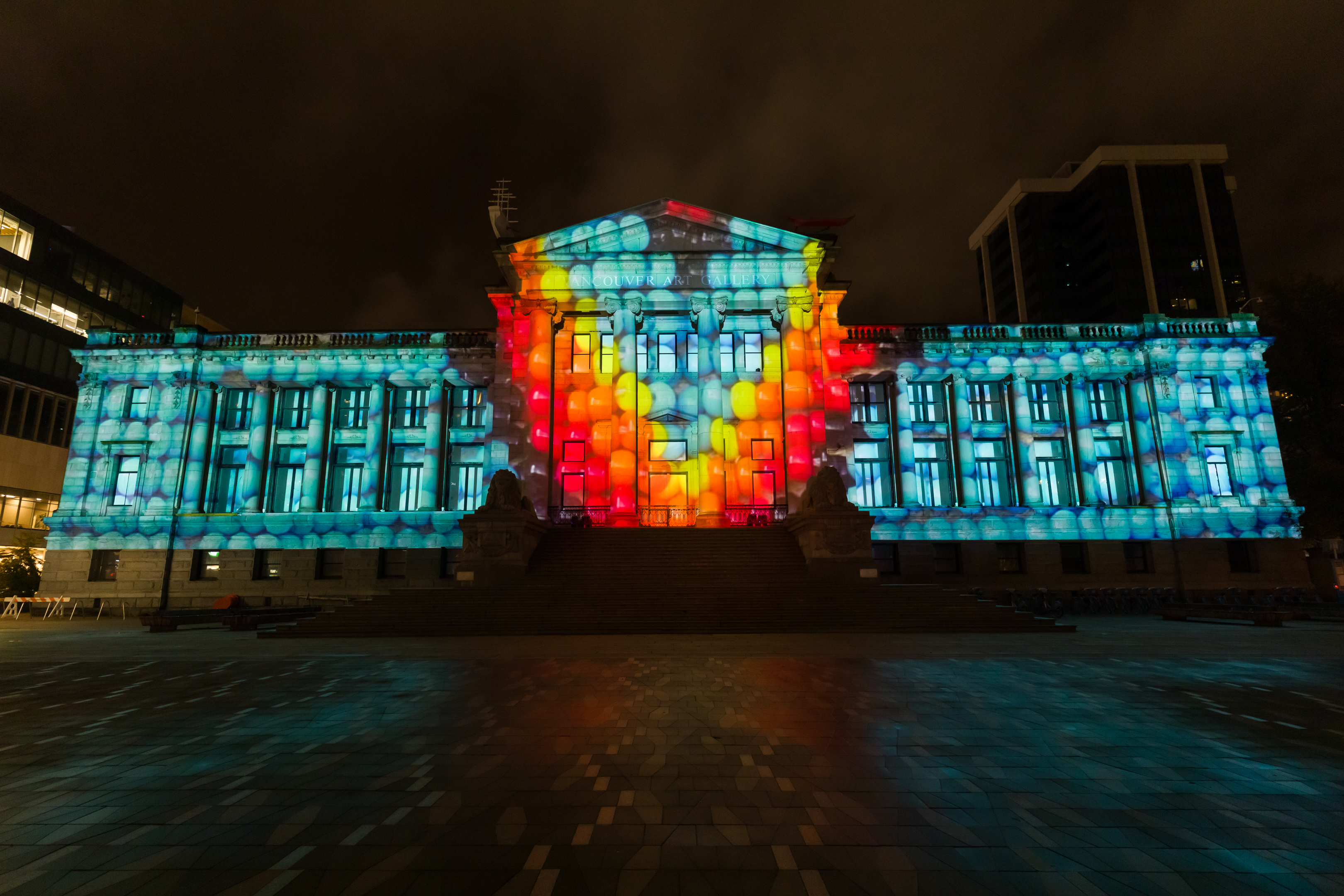 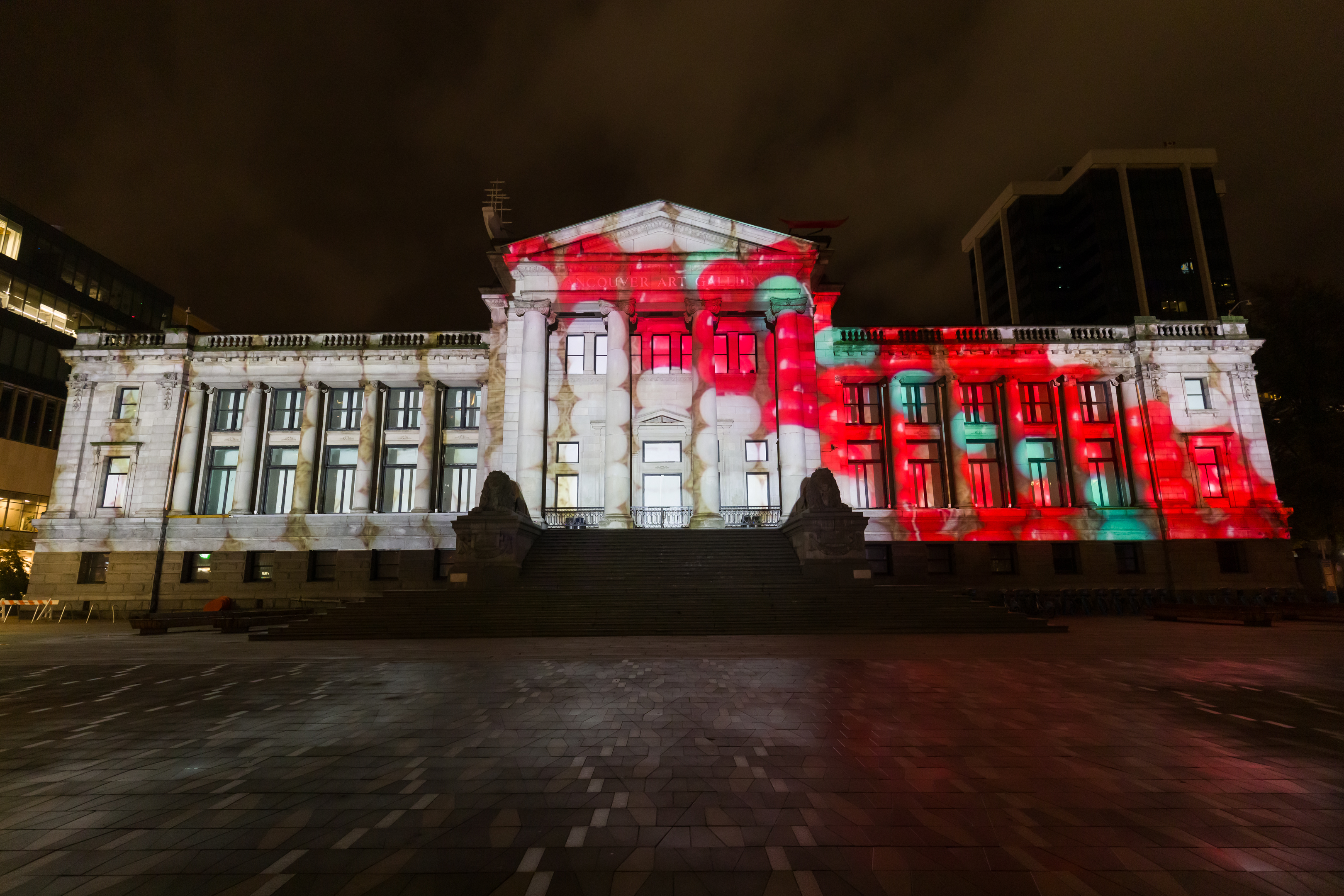 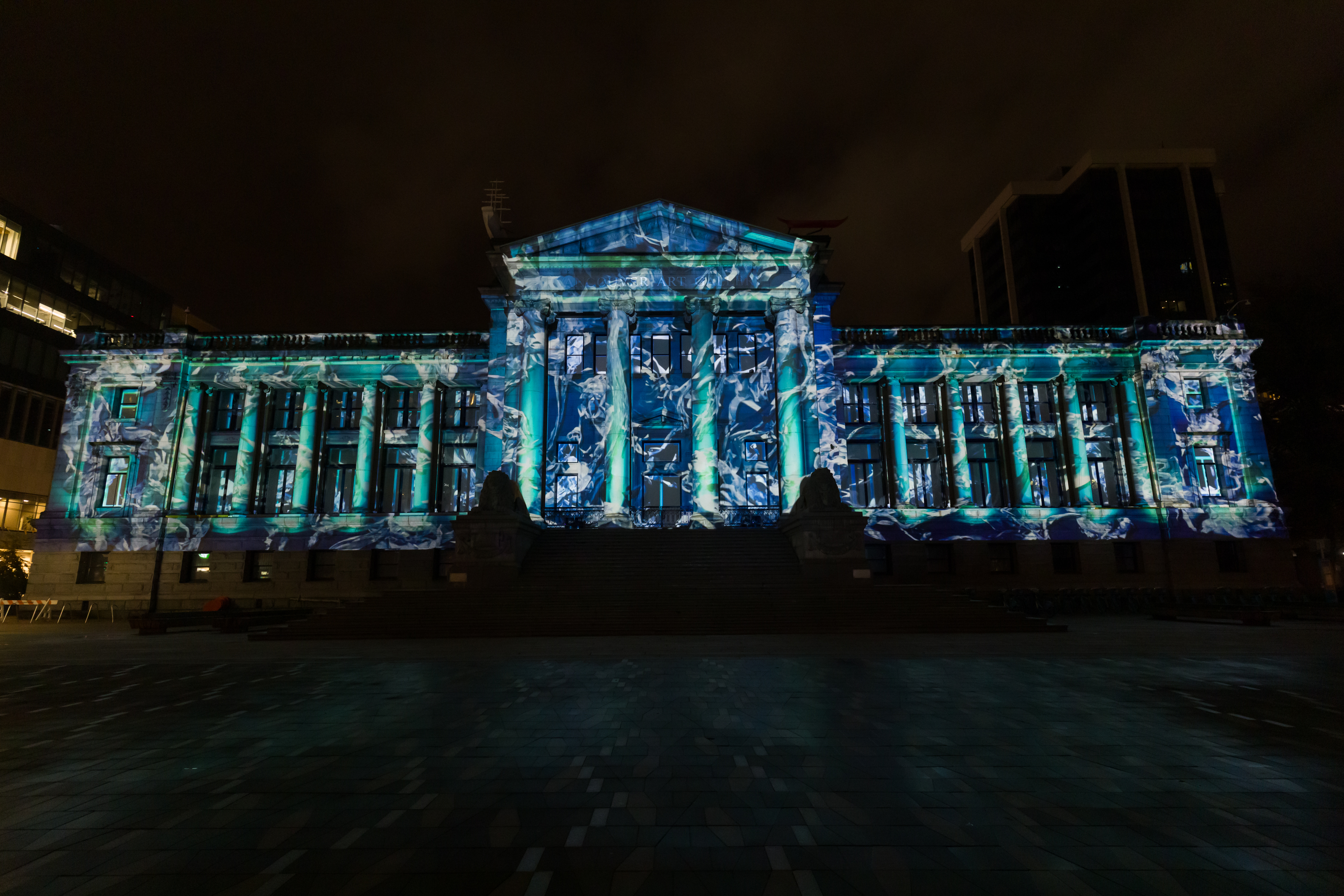 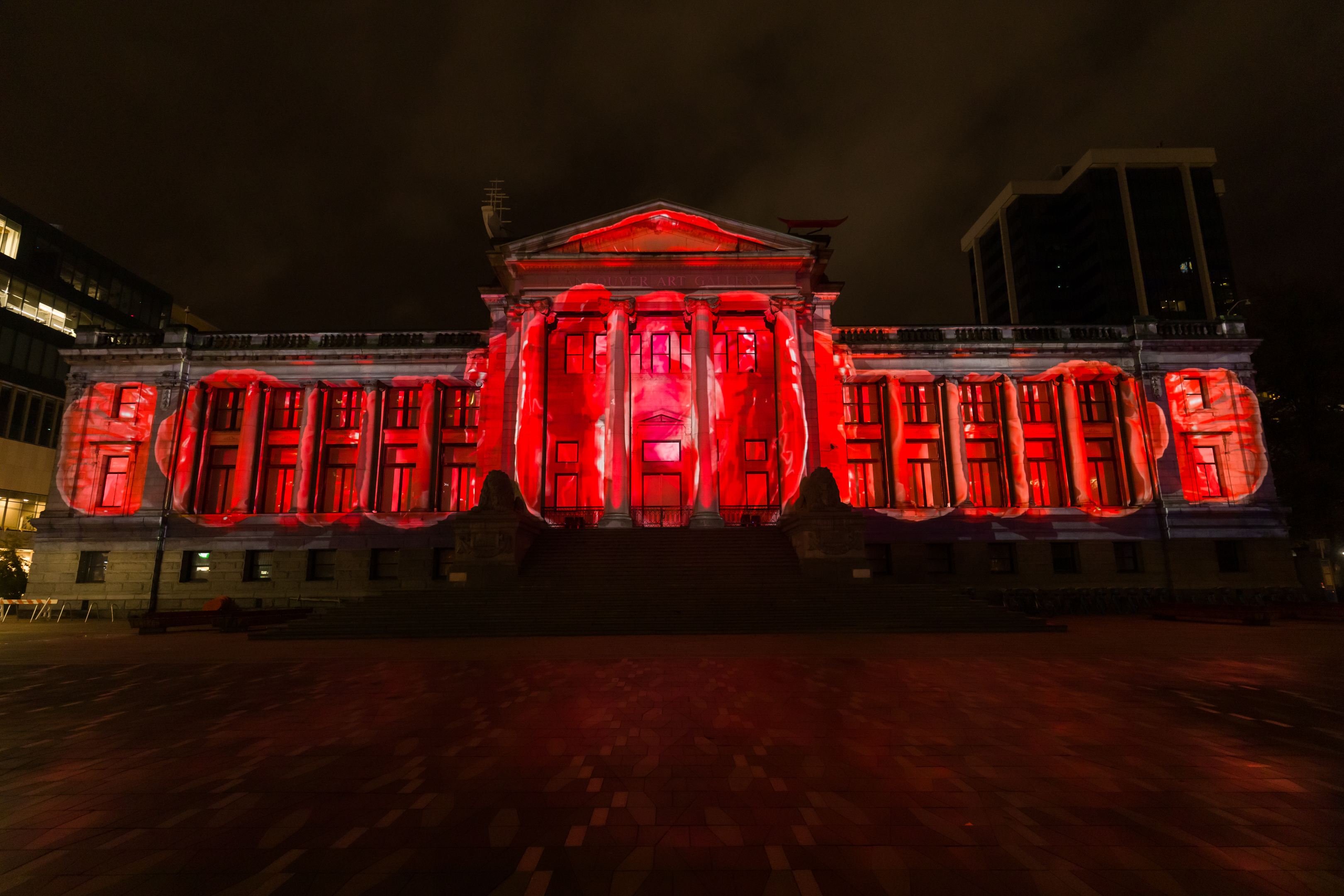 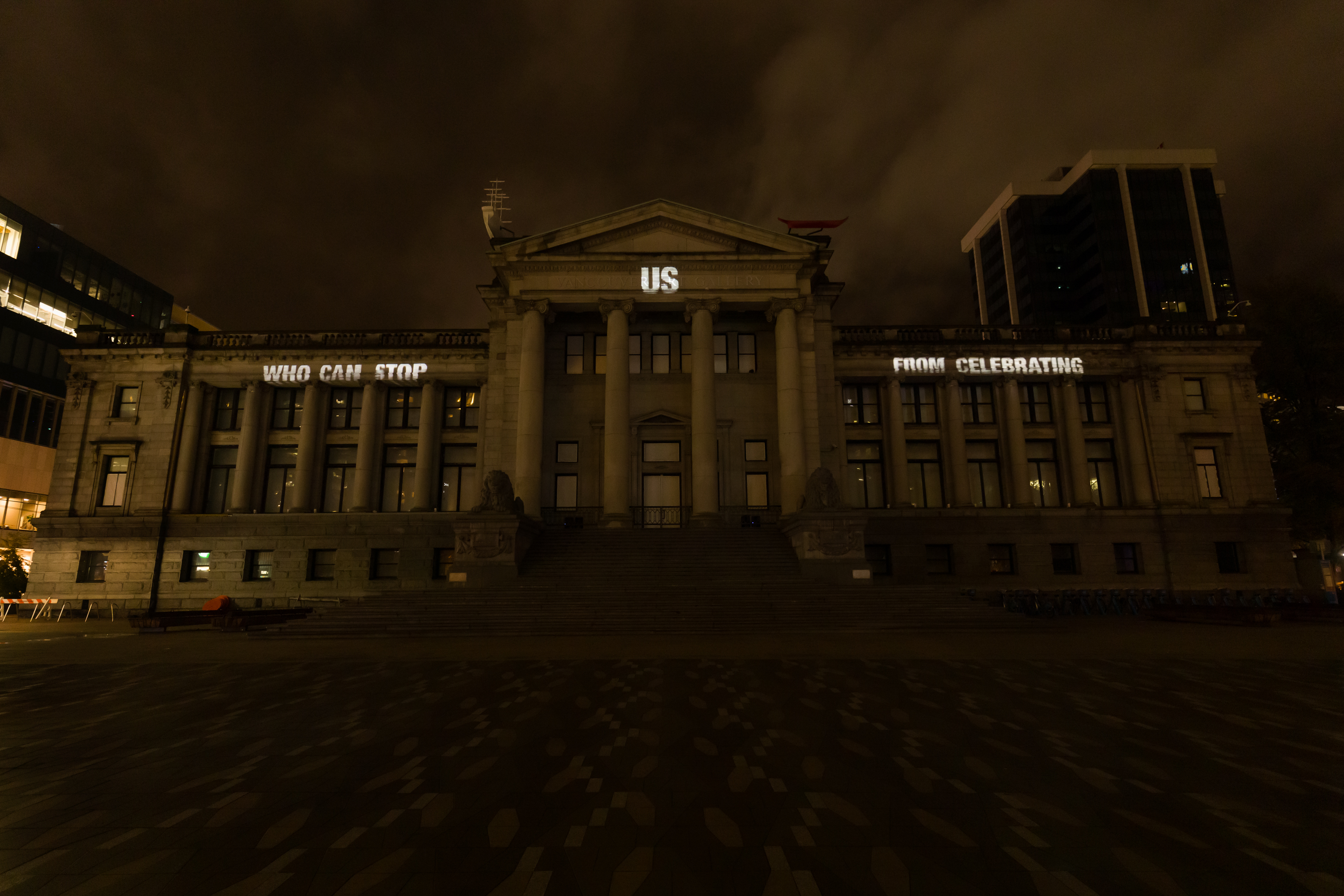 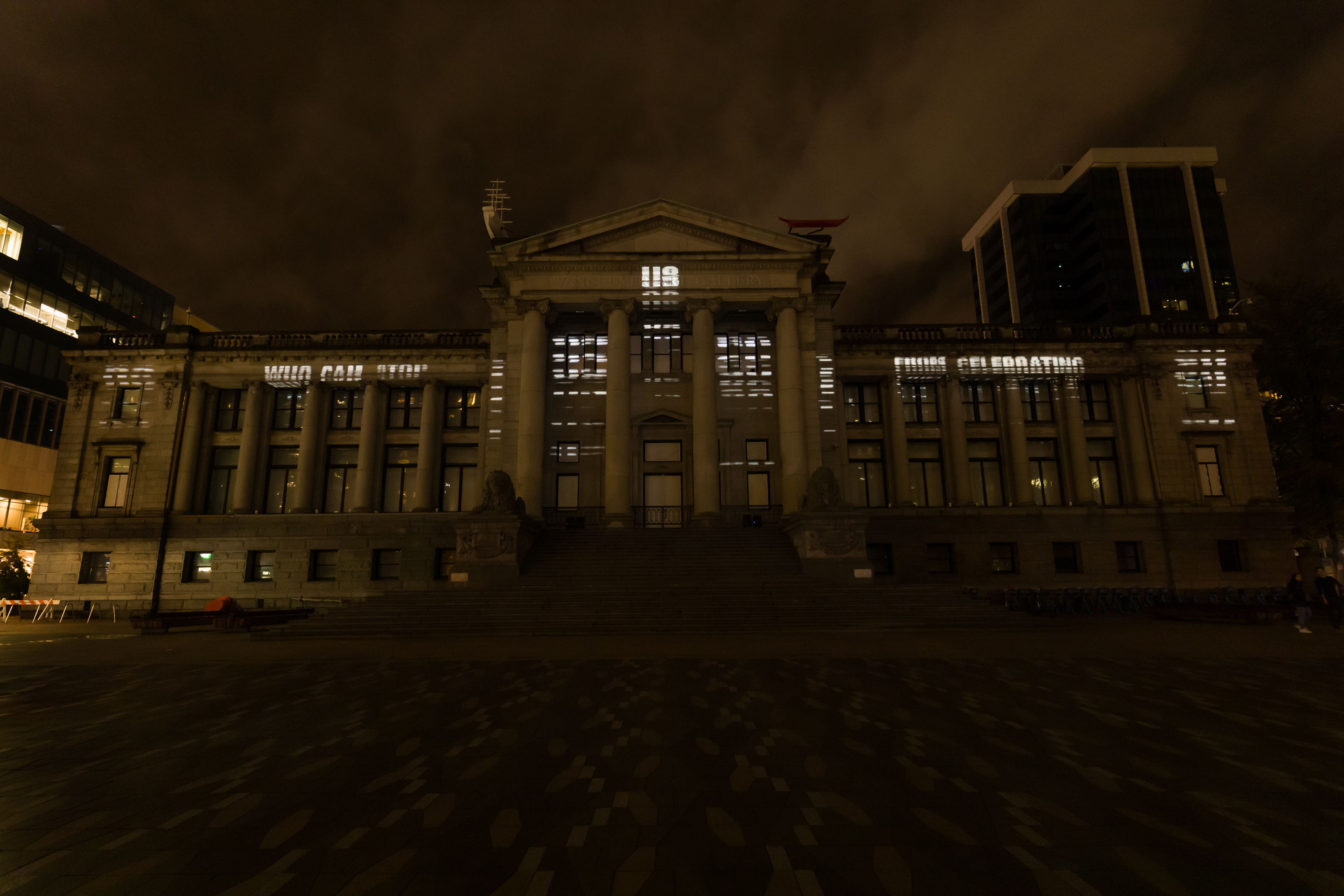 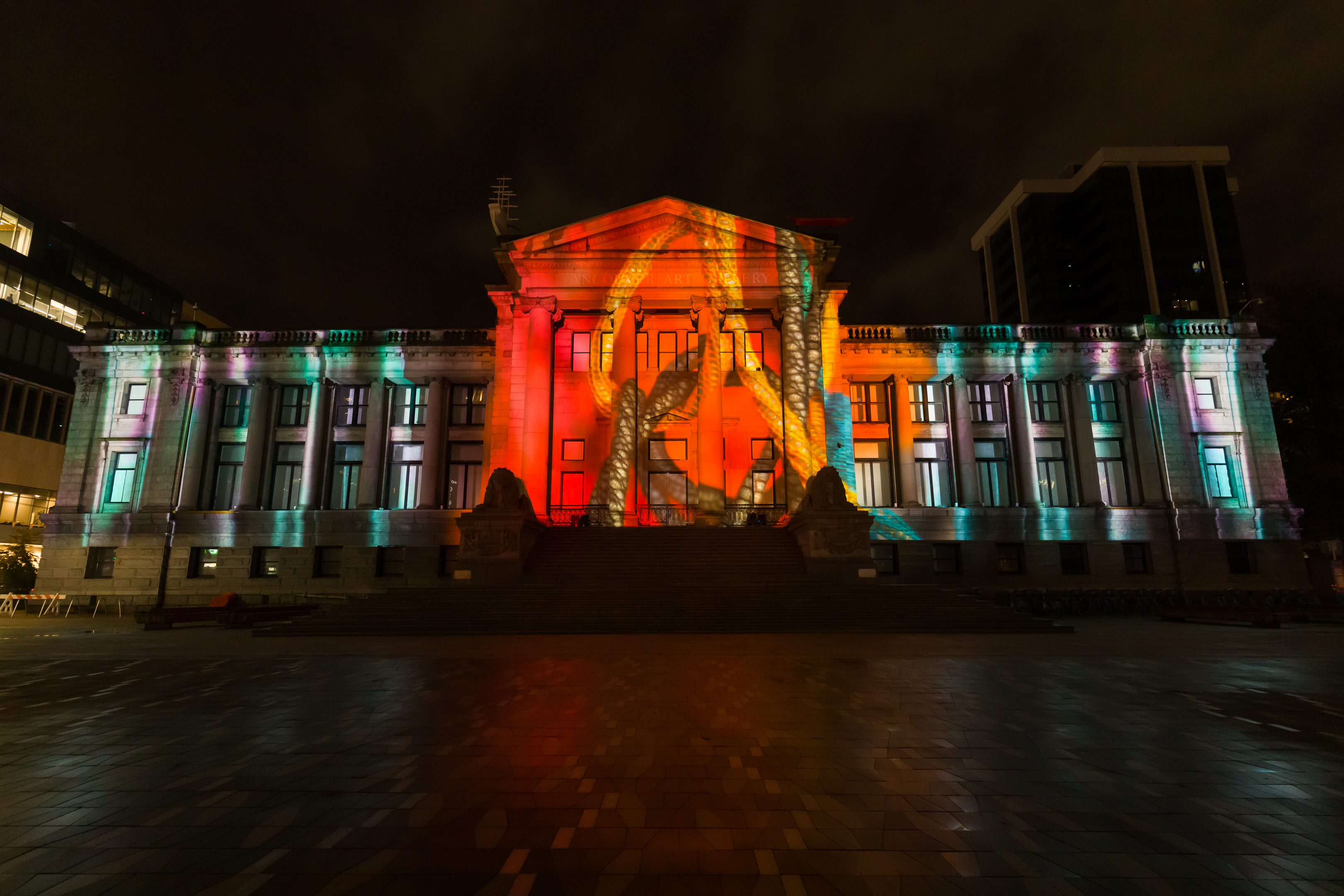 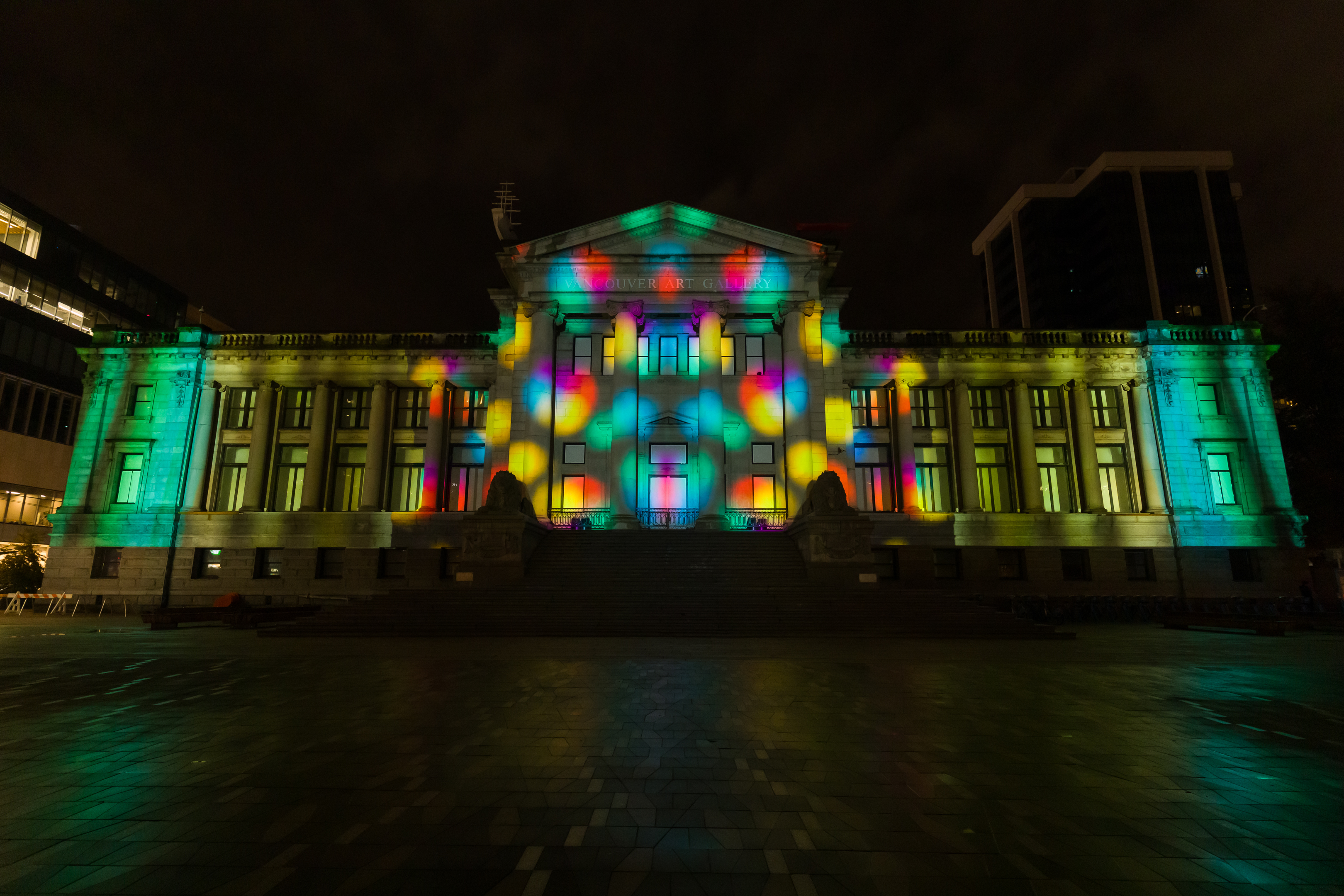 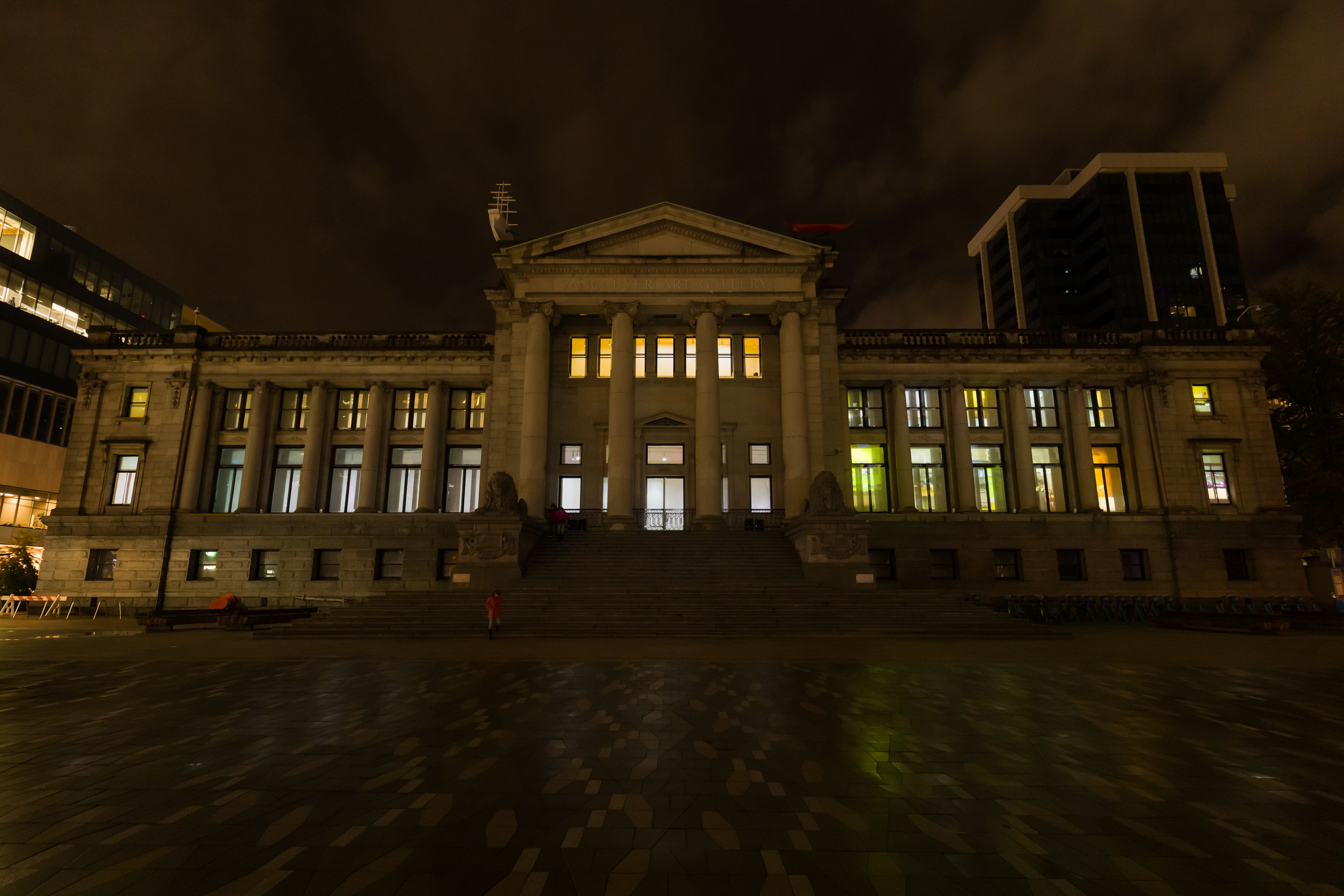 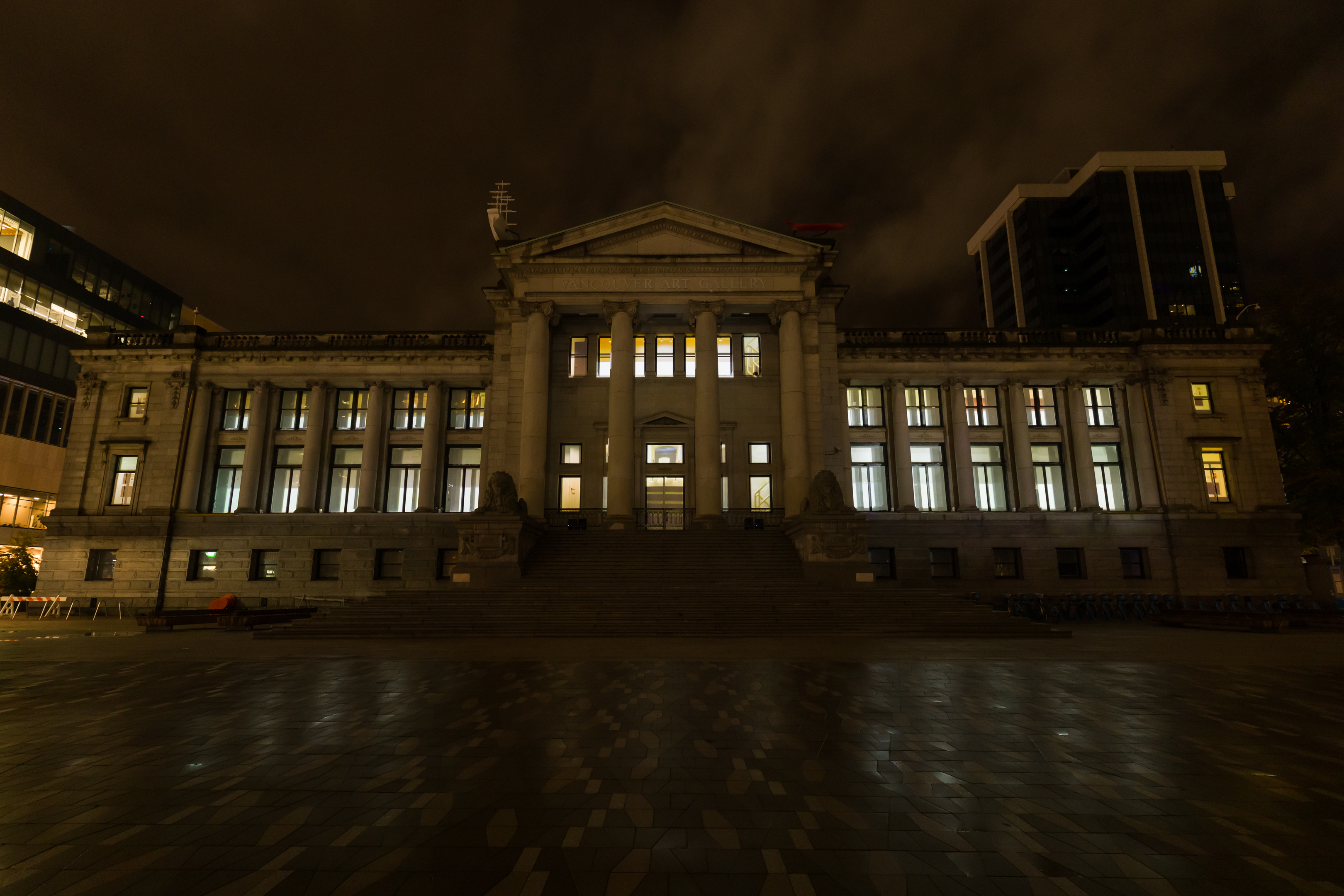 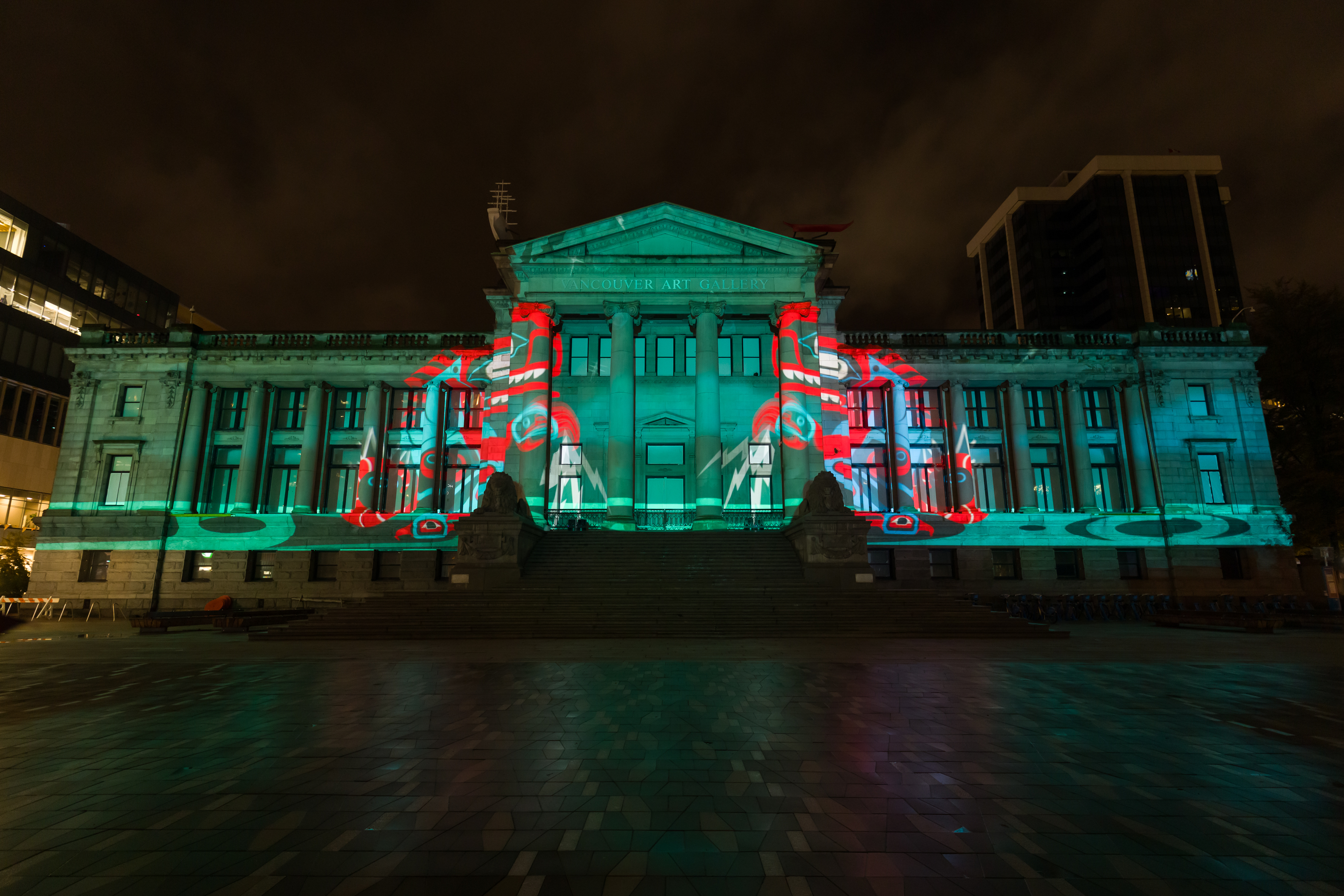 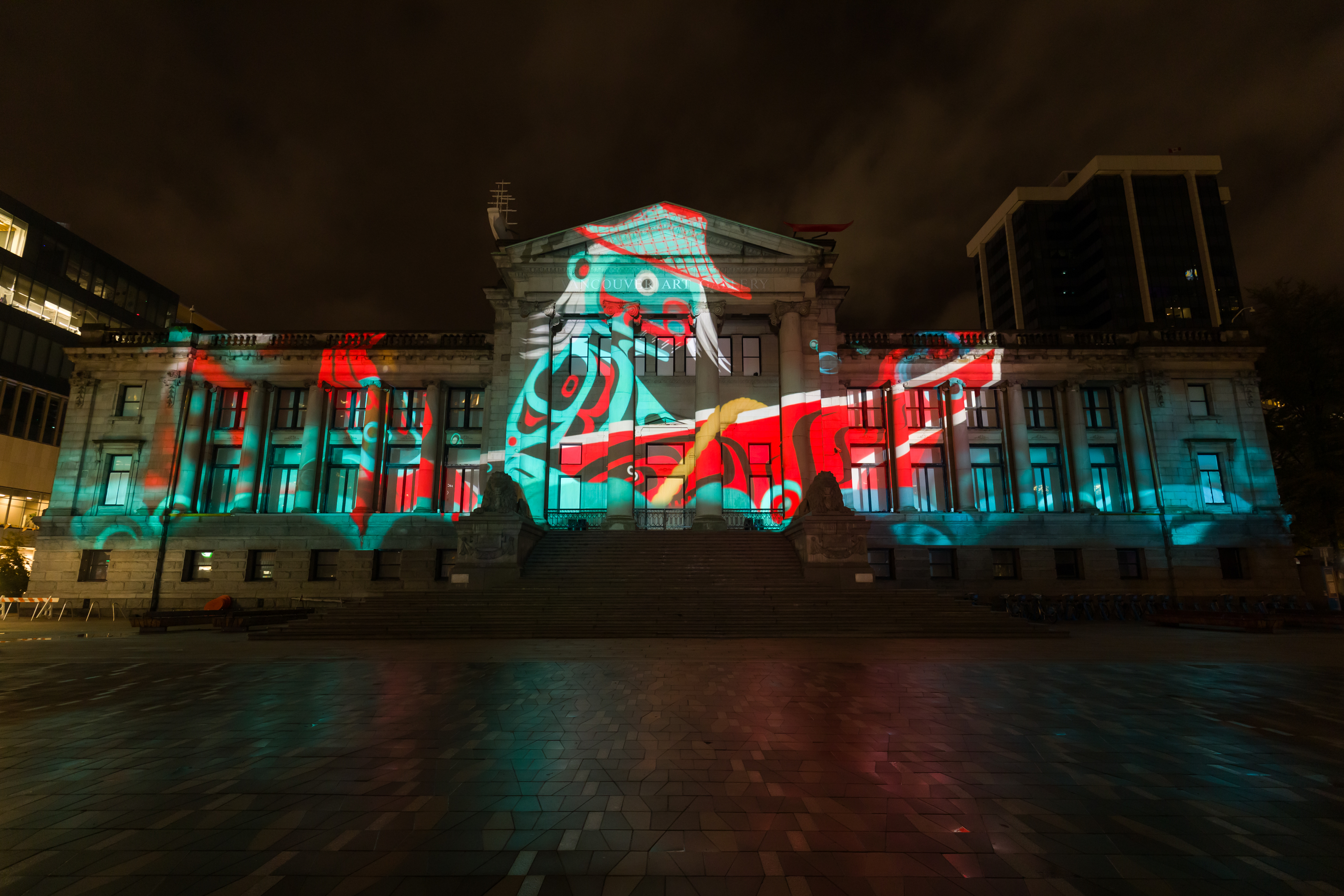 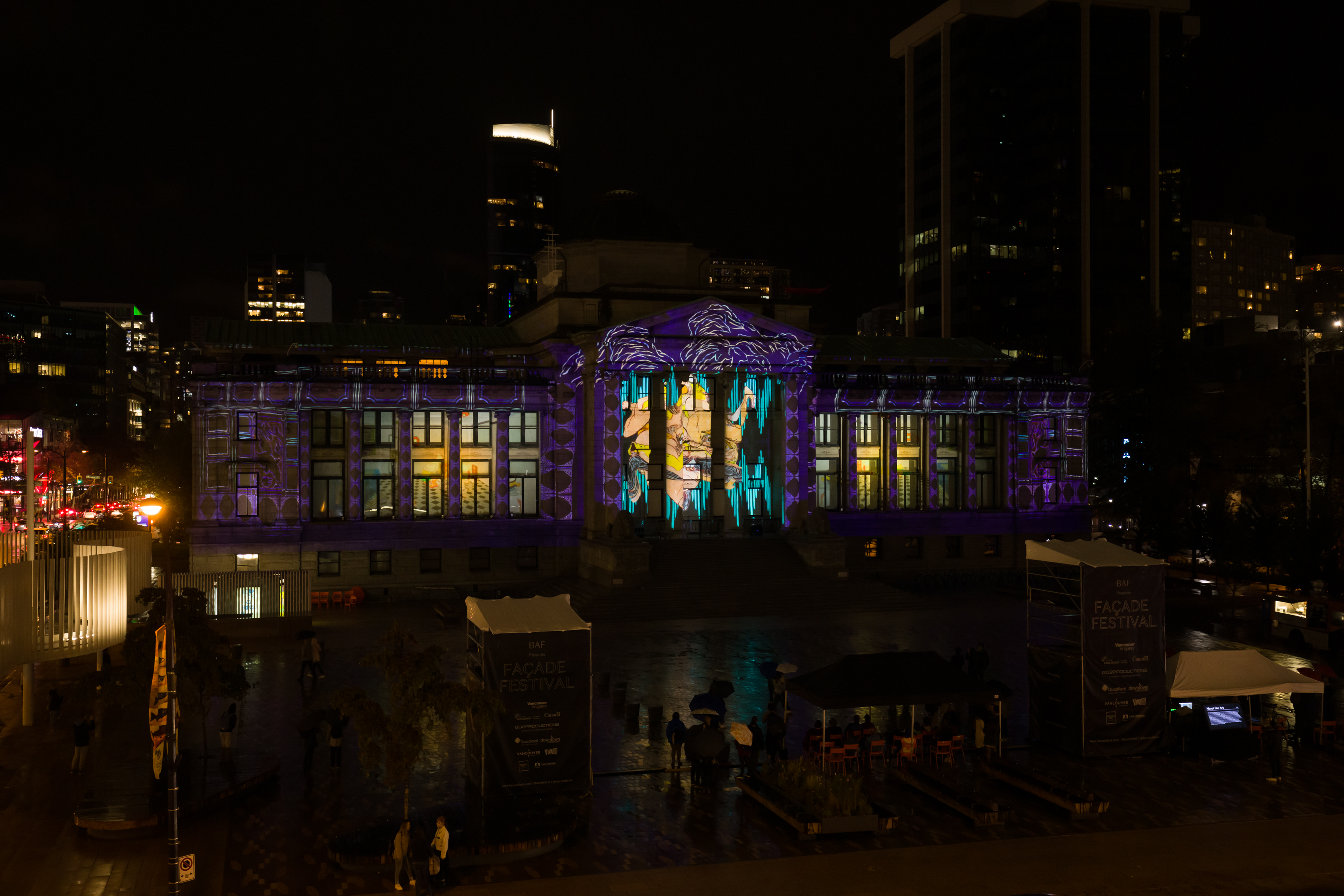 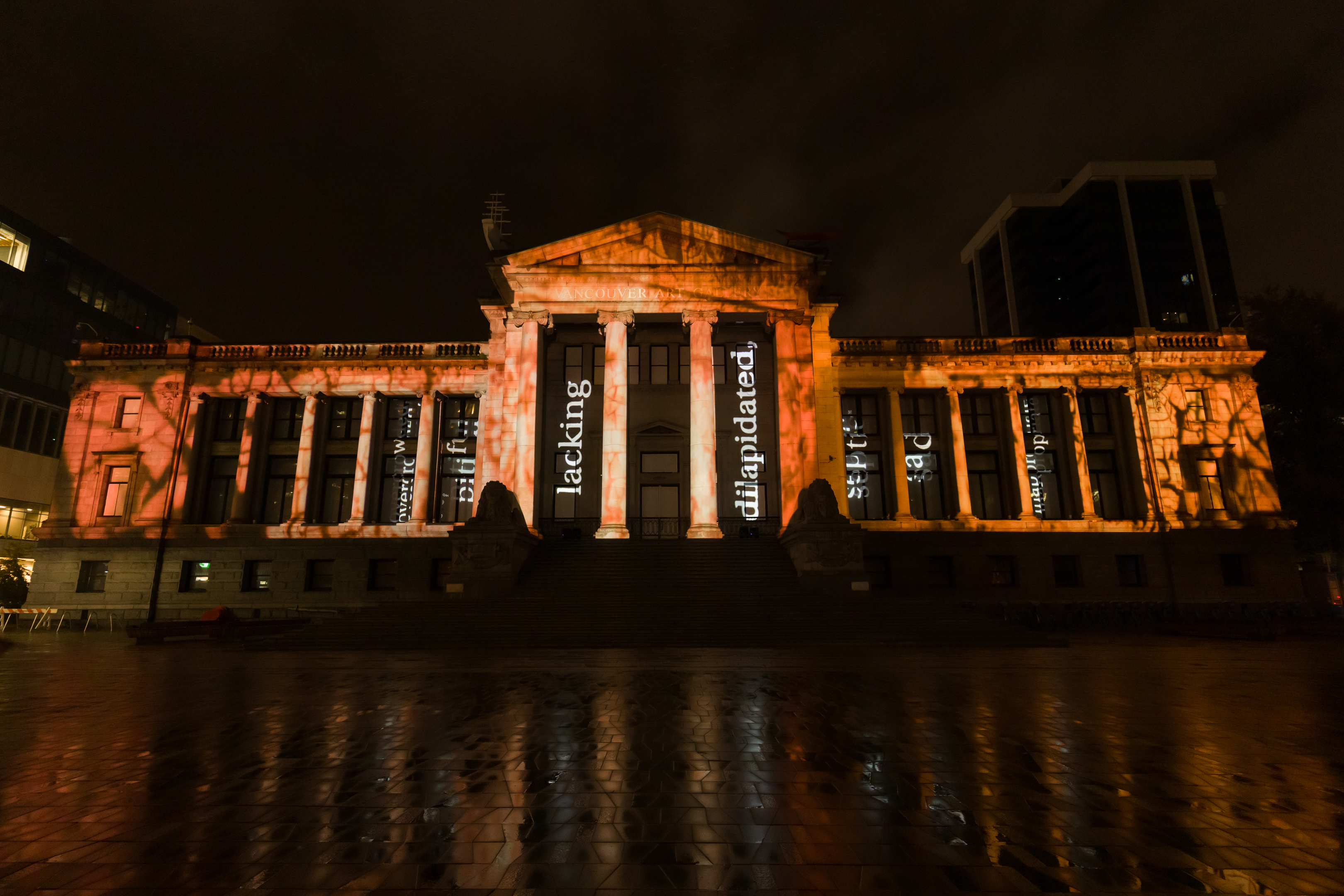 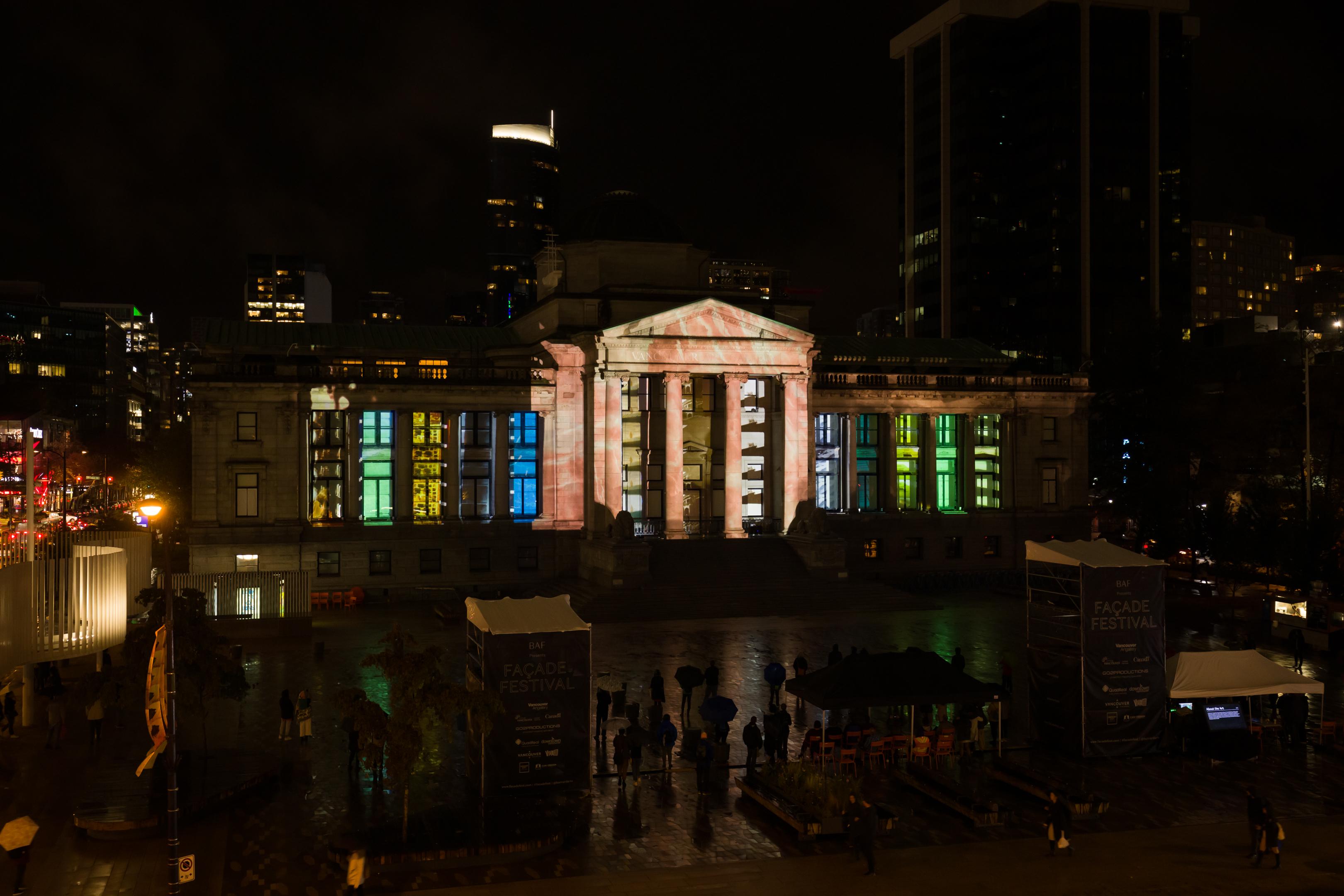 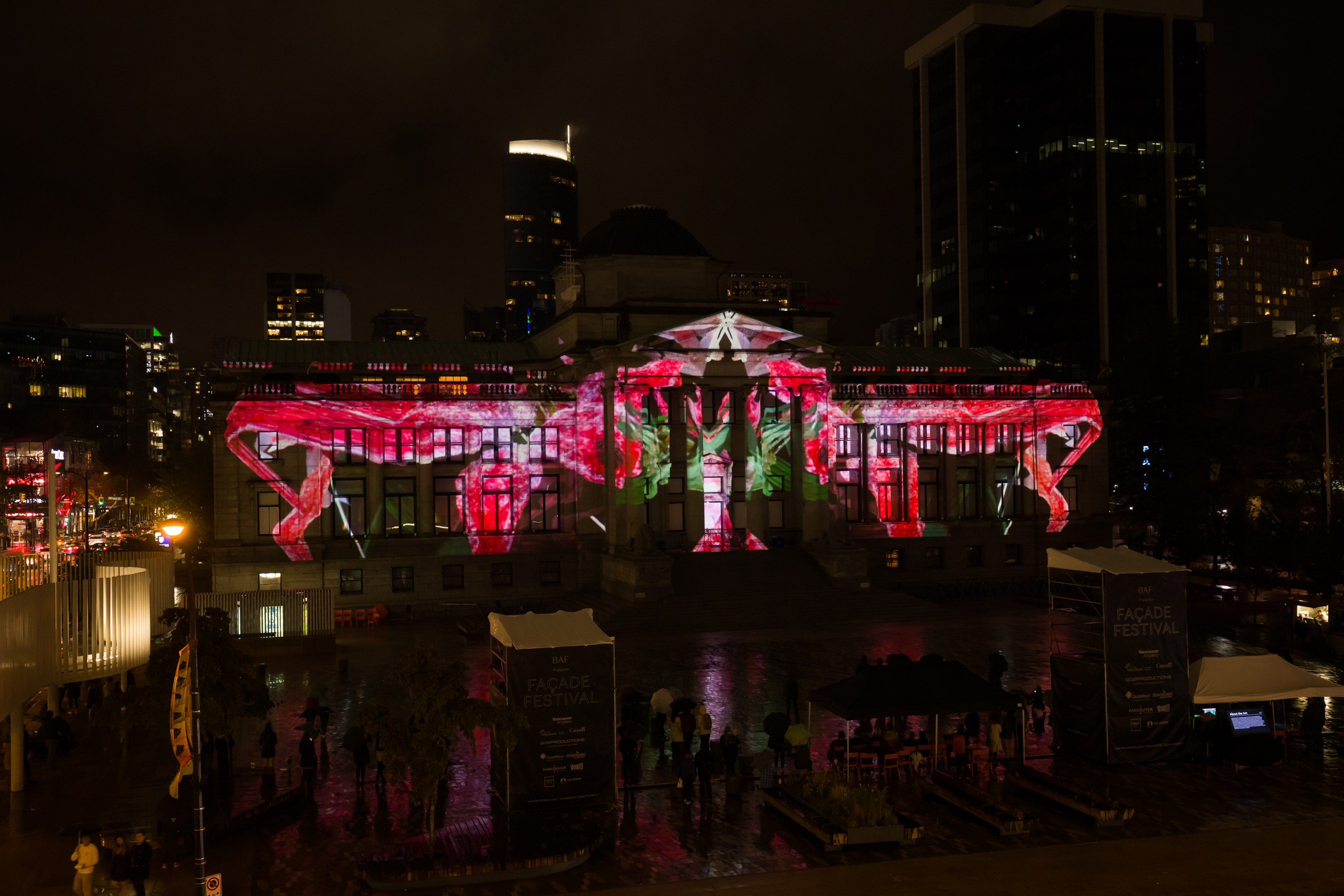 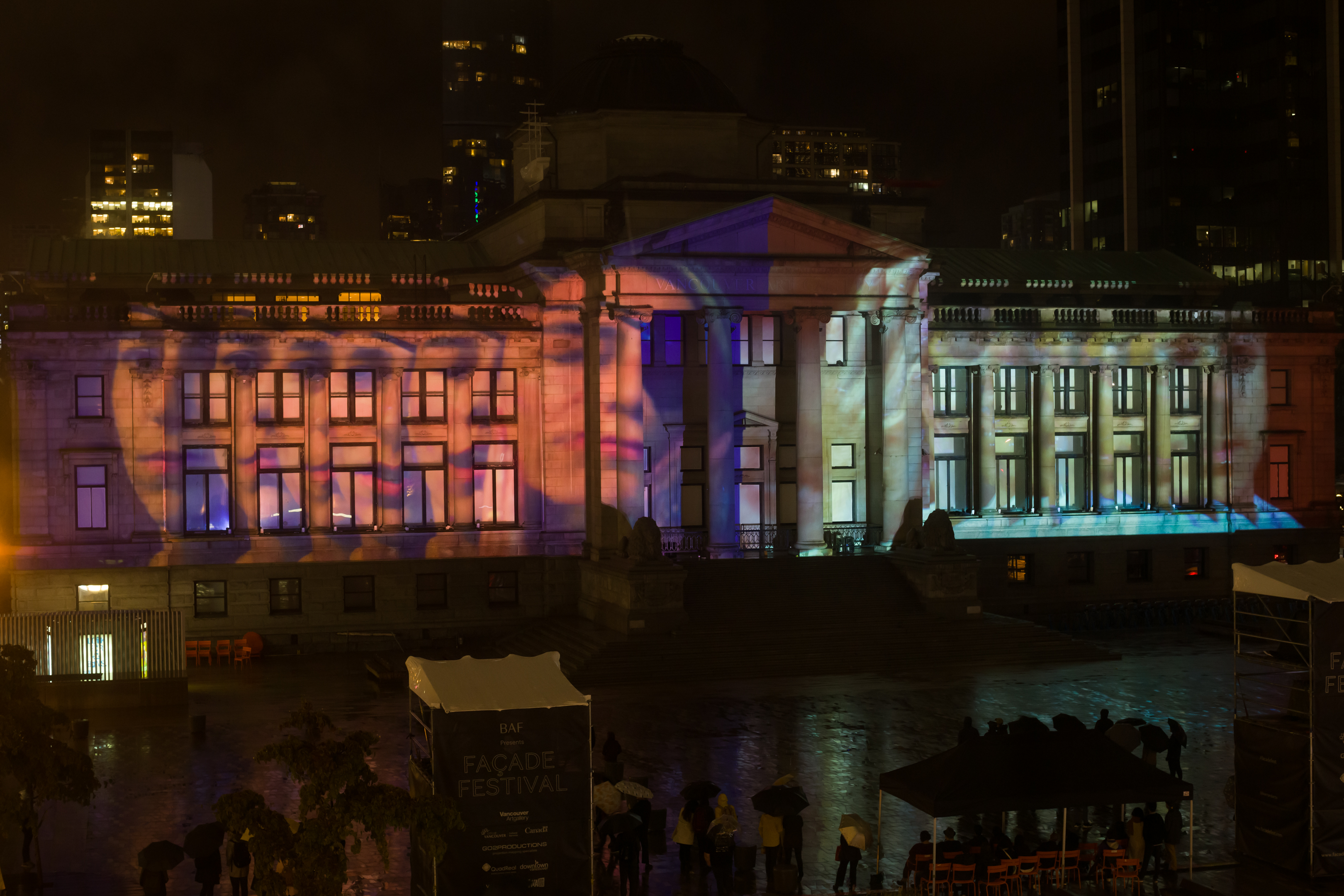 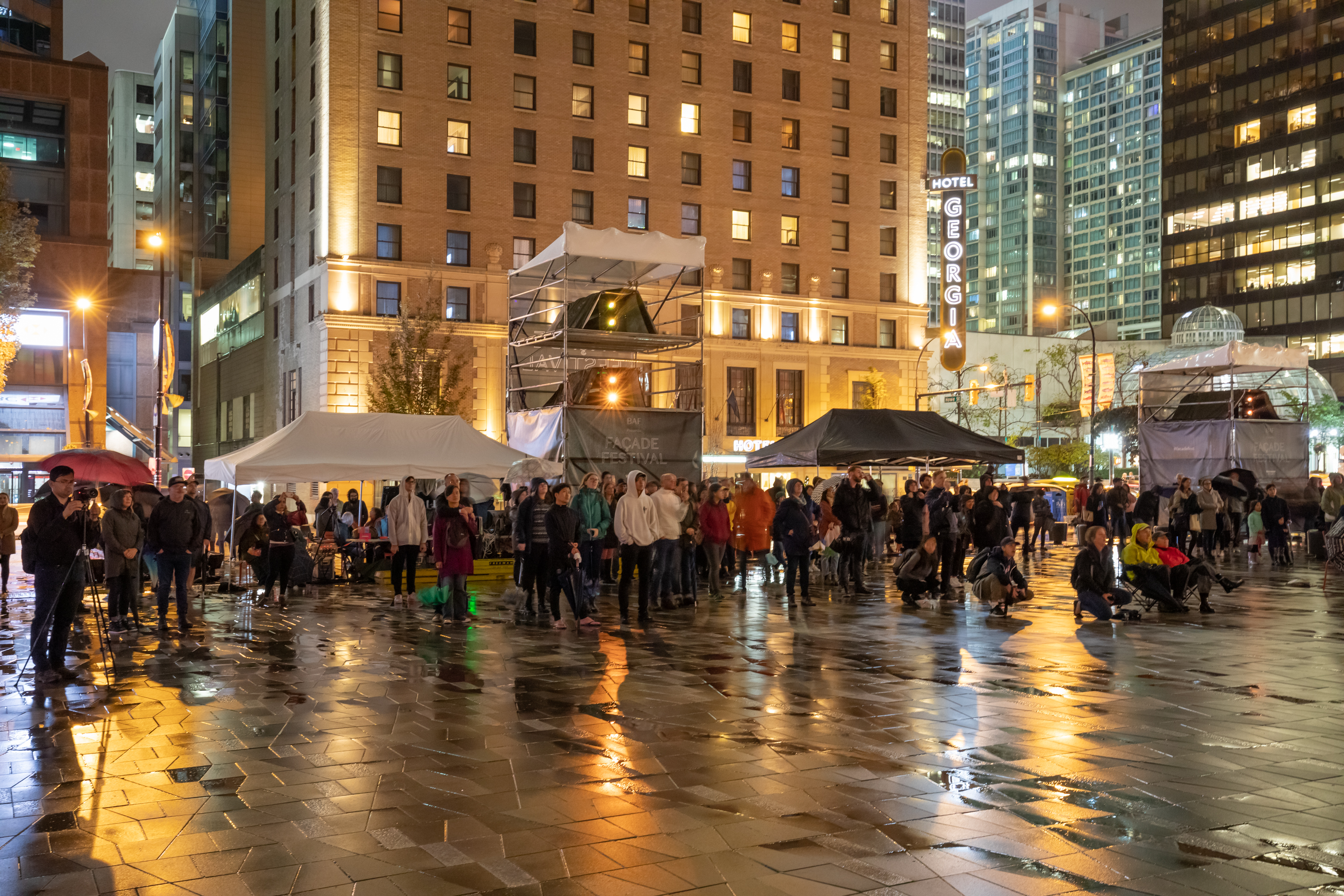 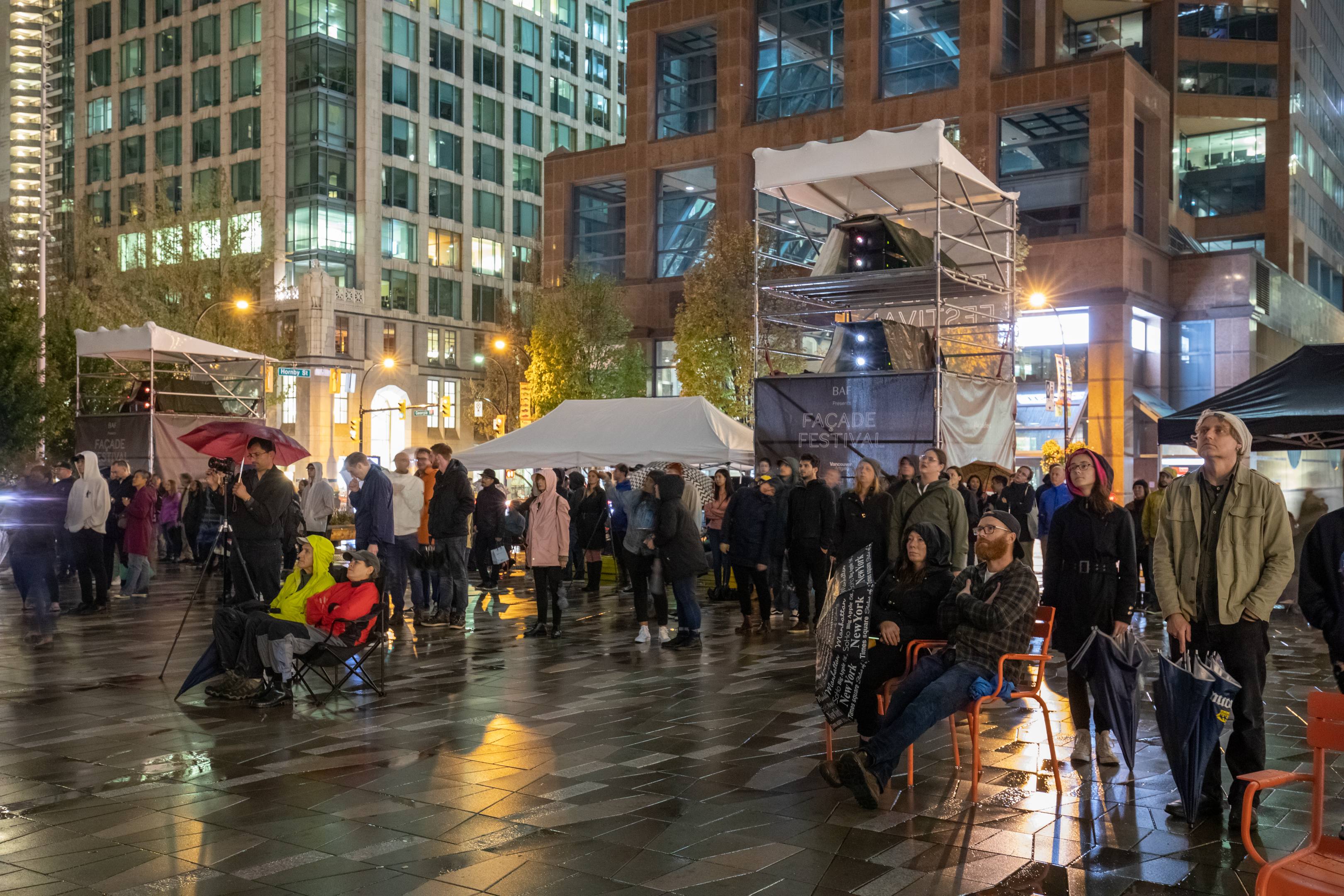 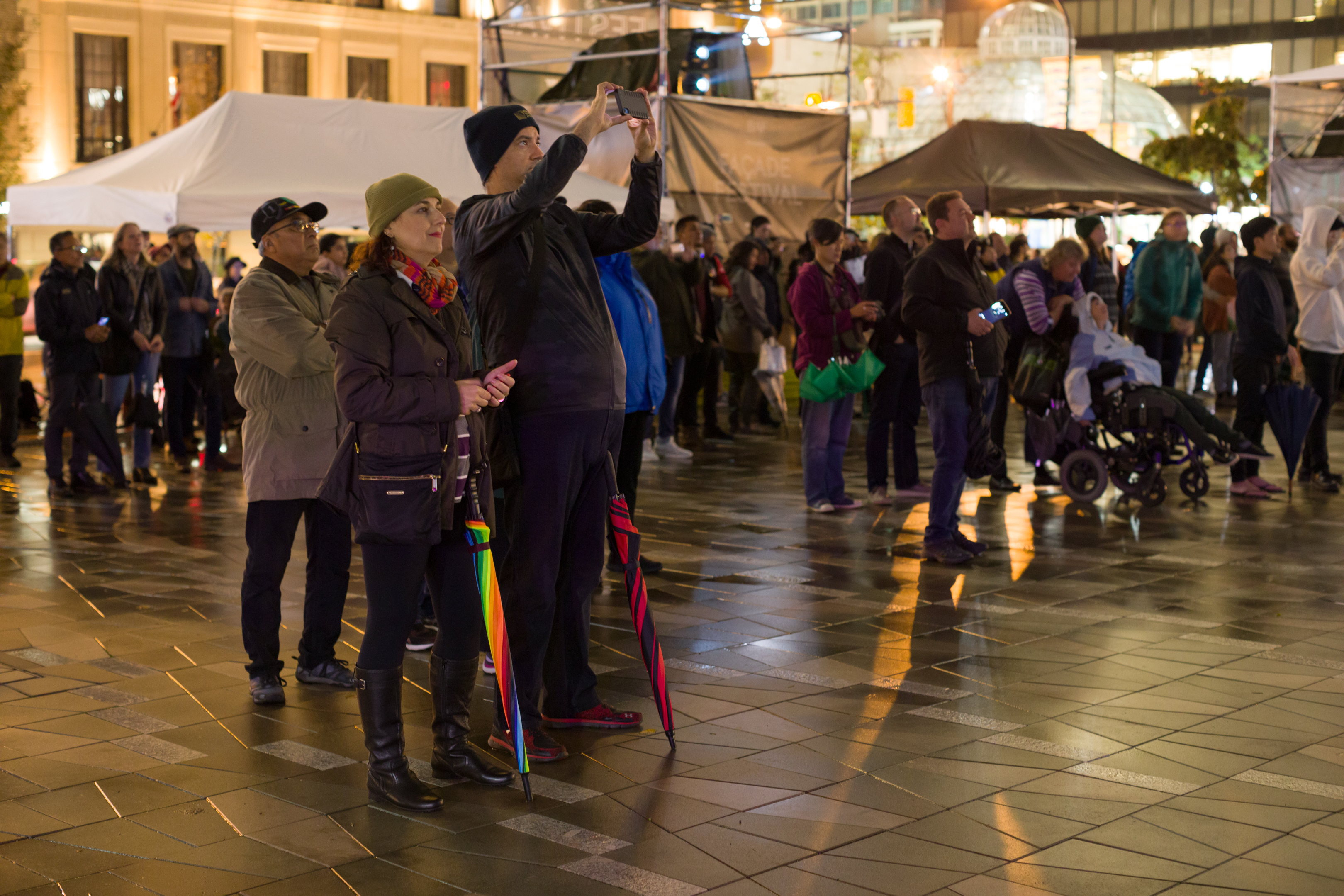 Façade Festival 2019 was a free, outdoor public art and cultural event presented by Burrard Arts Foundation, in partnership with the Vancouver Art Gallery. The festival featured commissioned works by established and emerging contemporary artists, and took place from sunset to midnight nightly from September 8th to 14th, 2019.

More information about Façade Festival 2019 can be found at facadefest.com | #FacadeFest

Every evening during the festival, bold artworks were projected over the Vancouver Art Gallery’s Georgia Street façade, covering the building with dynamic, site specific art. This immersive art installation utilized the innovative format of projection mapping to create a highly engaging, spatial experience for the public. It also provided an opportunity for the community to gather and enjoy art in a communal, accessible format reminiscent of an outdoor movie screening.

“Facade Festival speaks to the pervasiveness of digital forms in modern life and contemplates the role that new technologies play in contemporary art while engaging the public in a grand architectural intervention,” said Kate Bellringer, Director and Curator of Burrard Arts Foundation. “Selected artists developed their work with special consideration to the site of the Vancouver Art Gallery, our city’s unique character and the historic building itself.”

For 2019, a selection of BC contemporary artists, chosen by a committee of local arts community professionals, were commissioned to create ten new works of art specifically for the festival. Then, Burrard Arts Foundation partnered with projection-mapping specialists Go2 Productions to help the artists create artistic projections mapped to the Vancouver Art Gallery’s iconic architecture.

Over the course of the festival, works by two artists premiered each night from September 8th to 12th, followed by an encore presentation of all projections on September 13th and 14th. In addition, the final evening of Façade Festival featured a special projection mapping experience by Go2 Productions.

An artist talk, Façade Festival Artist Panel: Digital Media Temporality in Public Space, was also held at the Vancouver Art Gallery on Saturday, September 14th at 3 PM. Featuring a moderated panel of all participating artists, the dialogue centred around how concerns of space and time play into the festival’s unique format.

Facade Festival 2019 was created in partnership with the Vancouver Art Gallery and technical partner Go2 Productions. It was generously supported by the City of Vancouver, the Department of Canadian Heritage, Tourism Vancouver, QuadReal Property Group, the Downtown Business Improvement Association, Can-Design, Savoury City, and Viva Vancouver.

Where: Georgia Street side of the Vancouver Art Gallery, 750 Hornby Street

Saturday, September 14th: Special projection mapping experience by Go2 Productions and an encore of all artists’ works, 7:30 PM to 12 AM

Dana Claxton is a critically acclaimed exhibiting artist and film/video maker. She works in film, video, photography, single and multi-channel video installation and performance art. Her practice investigates beauty, the body, the socio-political and the spiritual. Her work has been exhibited internationally, and held in public and private collections including the Vancouver Art Gallery, National Gallery of Canada, Art Bank of Canada and the Winnipeg Art Gallery.

Justine A. Chambers is a dance artist living and working on the unceded territories of the Sḵwx̱wú7mesh, Musqueam and Tsleil-Waututh Nations. In her work, she privileges what is felt over what is seen, by working with her body as an imperfect recording device to develop a cumulative embodied archive. Josh Hite works with video, animation, sound, performance and photography, often creating reorganized archives of particular spaces, objects or behaviours.

Bracken Hanuse Corlett is an interdisciplinary artist hailing from the Wuikinuxv and Klahoose Nations. He began working in theatre and performance in 2001 and eventually transitioned towards his current practice that fuses painting and drawing with digital-media, audio-visual performance, animation and narrative.

Sandeep Johal is a Canadian visual artist whose colourful geometric forms and intricate black- and-white line work is aesthetically and conceptually inspired by her South Asian heritage. Sandeep believes in the power of art to create awareness around issues related to cultural identity, gender equality, and human rights. Her art practice is an expression of her social and cultural concerns, particularly gender justice.

Khan Lee was born in Seoul, Korea. He studied architecture at Hong-Ik University, before immigrating to Canada to study fine art at Emily Carr University of Art and Design. Through sculptural and media practices, his work attempts to exhibit results of experimentation with form and process in order to express inherent relationships between material and immaterial content.

Lindsay McIntyre is a film artist from Edmonton of Inuk and Settler descent. Her process-based practice is largely analog in nature and deals with themes of portraiture, place, form and personal histories.

Hyung-Min Yoon is a visual artist working between Vancouver, Canada and Seoul, Korea. She received her BFA at the Korea National University of the Arts and her MFA at Chelsea College of Art & Design in London. Her research and text-based art practice draw inspiration from literature and early art history.

Natalie Purschwitz seeks out spaces between art, design, performance and daily life. Through her visual art practice she considers how materials connect with ideological production and quotidian experiences and in this way, her research lies at the intersection anthropology, mythology, materiality and form.

Vancouver-based artist Howie Tsui (TsuiHoYan/徐浩恩) was born in Hong Kong and raised in Lagos, Nigeria and Thunder Bay. He works in a variety of media to construct tense, fictive environments that subvert canonized art forms and narrative genres, often from the traditional Chinese literati class.

Projection Mapping is a cutting-edge technology and art form that turns any three-dimensional object into a dynamic projection surface, or “canvas”. The scale and versatility of this new medium is still being explored, but what’s clear is the format’s ability to present unprecedented displays of bold creativity. This technology allows the artists to isolate each architectural element with their own captivating artistic expression to visually transform the Vancouver Art Gallery.

With components of art, architecture, film, and multimedia, the broad appeal of Projection Mapping is immense. With similar events around the world drawing crowds that number in the millions, global public interest in this burgeoning technology and art form is undeniable, and the boundaries of the creative practice are being pushed in more and more innovative and exciting directions with each progressing year.